J.J.Abrams' Star Wars: The Rise of Skywalker is a somewhat disappointing conclusion to the decades-old franchise, favoring an overload of visual spectacle, pandering to fanservice and feeding our nostalgia itch over an engagingly good story. The concluding chapter crash lands on Ultra HD with a gorgeous 4K HDR10 presentation, a highly satisfying Dolby Atmos soundtrack and the same set of supplements as its day-and-date Blu-ray release. Still, the overall UHD package makes a Recommended addition to the UHD library.

George Lucas created a cultural juggernaut with 1977's Star Wars, one that has unabashedly shaped and influenced moviegoers for the last four decades while also garnering arguably, the most religiously devoted and vocally belligerent fanbase in cinema history. With the epic space opera finally complete in The Rise of Skywalker, we can look at the entirety of the franchise with a wider lens, rank all the individual movies in order of storytelling quality and see why feeding to fanservice makes for frustratingly poor movies. J.J. Abrams' third entry of the new sequel trilogy, making it the ninth installment in the series overall, easily falls at the bottom of the list — resting comfortably above Attack of the Clones, the spin-off Solo tale but enjoying the same level of smug satisfaction as The Phantom Menace. Oddly, Abrams' lands this concluding chapter with the sort of skilled, breathtaking visual spectacle expected of the saga, but in that, he plays it all too safe, predictable and ultimately, unremarkable.

From a script co-written with Chris Terrio (Argo, Justice League), based on a story idea by Derek Connolly and Colin Trevorrow (Jurassic World: Fallen Kingdom), Abrams essentially takes an opportunity to retcon various story details explored in Rian Johnson's The Last Jedi. This is apparent from the opening moments when the obsessive, angst-ridden Kylo Ren (Adam Driver) tracks down Emperor Palpatine (Ian McDiarmid) to some dark, inhospitable planet, giving the entire production a rather spiteful tone from the onset. The most problematic is this strenuous effort to satisfy fan expectations, especially when providing an answer to Rey's (Daisy Ridley) mysterious origins, which frankly, should have remained mysterious instead of the lame, thinly-linked excuses imagined by Abrams. It all comes to a crashing, head-scratching halt in the final act when The Force Awakens director further justifies the Sith Lord's return as some daft, overarching masterplan that has haunted the entire series. 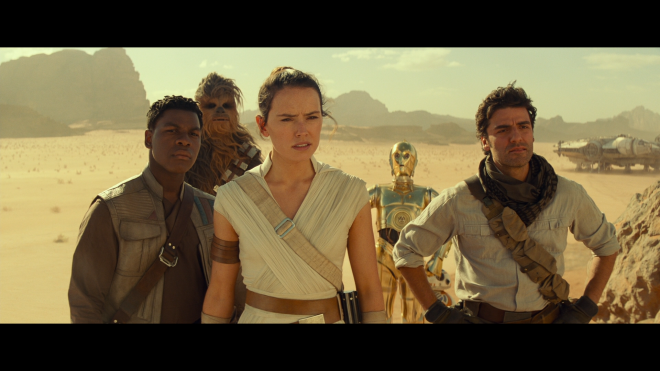 Making for an ultimately mediocre, uninspired popcorn piece, Abrams spends a majority of the 142-minute runtime simply justifying all these plot details and devices. In trying to cram so much history while juggling a galactic host of characters, he jumps from one subplot to the next like Finn (John Boyega) and Poe (Oscar Isaac) lightspeed skipping from the First Order, giving audiences little time for events to feel their impact or significance. All the while, Abrams strains to feed our bittersweet longing for Lucas's original trilogy with various cameos and allusions, such as Lando Calrissian (Billy Dee Williams) flying the Millennium Falcon or seeing Carrie Fisher, Mark Hamill and Harrison Ford do nothing of real consequence. For a filmmaker with the talent at good storytelling while thwarting expectations by scratching our collective nostalgia itch, The Rise of Skywalker is an unfortunately average if not also a disappointing conclusion to the saga, littered with mesmerizing spectacle but no heart.

Walt Disney Studios Home Entertainment brings Star Wars: Episode IX - The Rise of Skywalker to 4K Ultra HD Blu-ray as a three-disc combo pack with a Digital Copy code. Said code can be redeemed via RedeemDigitalMovie.com or MoviesAnywhere for access to the 4K Dolby Vision version with Dolby Atmos audio. Inside the black, eco-elite case with a glossy, embossed slipcover, the dual-layered UHD66 disc sits comfortably opposite a pair of Region Free, BD50 discs— one containing the film while the other comes with all the special features. At startup, viewers are taken directly to a static screen with the usual selection along the bottom and music playing in the background.

The final chapter to the decades-long saga concludes on Ultra HD with a gorgeously stunning, near-reference HEVC H.265 encode, boasting a notably improved contrast and brightness balance. Every action sequence and conversation glows with enthusiastically energetic whites like Rey's humble monk-like outfit, the clean uniforms of Stormtroopers and the clouds floating through the sky. The stylized cinematography also benefits with brilliantly crisp, sparkling specular highlights, from the glittering sparks of the lightsaber battles and lasers to the lighting everywhere. In fact, the finer details within the hottest sparks are easier to see, such as in C-3PO's glowing eyes, making the 2160p picture really pop with a spirited vigor. The way light bounces and reflects off the surfaces of ships and droids is equally impressive and striking, giving those objects a realistic metallic polish.

At the same time, black levels are slightly inkier and richer than its Blu-ray brethren, providing the 2.39:1 image with a cinematic, three-dimensional quality while excellent shadow detailing allows for strong visibility within the darkest corners. In fact, the freshly-minted transfer is noticeably sharper, exposing every pore, wrinkle and negligible blemish in the entire cast. We can better make out every scratch, dent and smudge on the droids, every hair and whisker of humans is distinct, and the individual leaves and blades of grass are discrete from a distance. In pretty much every scene, the threading and stitching in the clothing are very well-defined while every nook and cranny on the various spaceships is unmistakable. A few mildly softer moments are sprinkled throughout, but they're easily dismissed as inherent to the source that doesn't diminish from the overall quality. Awash in a very fine layer of natural grain, the 4K video is ultimately beautiful and very film-like.

Shot on a combination of traditional 35mm and 65mm film — elements that were later mastered to a 4K digital intermediate — the HDR10 presentation showcases an eye-catching array of sumptuous primaries, like the vivid cherry reds in the lights and lively emerald greens of the Wayfinder. However, a wide range of blues dominates and saturates much of the action, from the cerulean tone in Rey's lightsaber and the steely-cool shades always bathing the First Order to the stunning blend of teals, arctic blues and indigos in the climactic battle. Secondary hues are, likewise, quite spectacular and striking, brightening the screen with earthy browns, varied tans and beautiful sepias while visiting the many sandy desert planets. The sequence on Pasaana, however, counters the palette with a lovely collection of fiery oranges, rich magentas, dramatic fuschia and butterscotch yellows, and the battle on Exegol ignites with lush reds and deep marigold oranges in explosions while mixed with small bursts of purples and electric blues. (Video Rating: 94/100)

At this point, it should come as no surprise listeners will have to raise the volume a few decibels to fully enjoy what is otherwise a marvelously engaging and highly satisfying Dolby Atmos soundtrack.

After adjusting the volume to -5 above reference level on my system, I quickly noted the higher frequencies are never pushed hard, the same issue mentioned in the review of the Blu-ray's lossless option. This would suggest it's a deliberate choice in the audio design or the result of an intentional alteration specifically for the home video release. In either case, the object-based track doesn't appear to suffer or feel as though lacking in any way. The loudest, action-packed segments maintain strong clarity while exhibiting excellent detailing and separation within the mid-range. Overall imaging is greatly improved, feeling wider and more spacious as background activity effectively and more convincingly travels into the top heights and the off-screen space.

Amid the mayhem, vocals remain well-prioritized and precise with appreciable intonation in the performances. Interestingly, the low-end gains a bit more oomph, providing a better palpable presence and room-energizing weight to the action and music. At the same time, various atmospherics, like the subtle sounds of local wildlife or the electrical blips on the interior of spaceships, flawlessly pan across the surrounds and echo above the listening area. The climactic battle, of course, offers the best demo-worthy moment with sound effects stirringly bouncing in every direction and across the overheads, generating a satisfyingly immersive and effective hemispheric soundfield. (Dolby Atmos Audio Rating: 90/100)

The entirety of the bonus collection is available on the third disc, which is the same as the day-and-date Blu-ray package. There is also a digital exclusive called The Maestro's Finale.

Rather than delivering a continuation of its predecessor, J.J.Abrams' Star Wars: Episode IX - The Rise of Skywalker strains to retcon the storyline by pandering to fanservice and expectations with absurd plot details that are of little consequence. With a vast ensemble cast and plenty of visually mesmerizing spectacle, the rose-tinted ninth episode in the series favors nostalgia over an engagingly good story, bringing the decades-old franchise to a somewhat disappointing finish. The final episode to the decades-old series crash lands on Ultra HD with a gorgeously stunning 4K HDR10 presentation and a highly satisfying Dolby Atmos soundtrack, offering fans an excellent improvement over its Blu-ray counterpart. Sharing the same set of supplements as its day-and-date HD release, the overall UHD package nonetheless comes recommended for fans and completists.