In 2015 Star Wars blasted back into theaters in a big way with Episode VII: The Force Awakens under the guidance of Disney and J.J. Abrams. While working to introduce a new younger cast and reestablish old heroes, the film charts a new course for galactic wonder - with a heavy prescription of nostalgia. Certainly a promising start to a new trilogy…

"This will begin to make things right."

After Lucas unleashed his "Special Editions" of the Original Trilogy, two mediocre films with one halfway decent entry to round out the often problematic Prequel Trilogy, the world was ready for a new Star Wars adventure; something that felt like what fans originally experienced decades ago in theaters. Episode VII: The Force Awakens promised a new and exciting George-free adventure under the watchful eye of writer/director J.J. Abrams, producer Kathleen Kennedy, and the entire Disney mega marketing machine. After the bloated CGI of the Prequel Trilogy, The Force Awakens was the first film in decades that actually looked and felt like it belonged in the galaxy far far away. 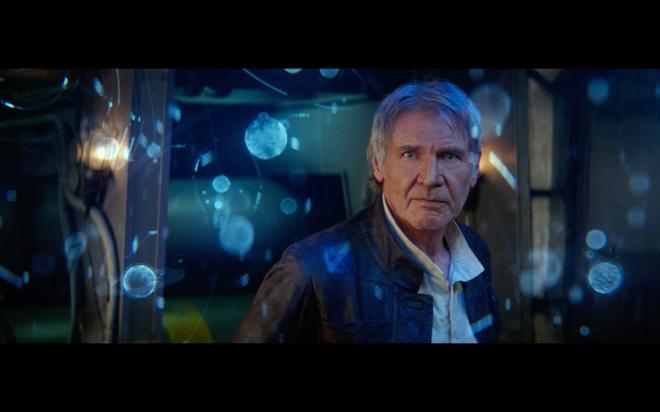 We had a trio of new characters with Poe Dameron, Finn, and a new Jedi apprentice Rey. We had a new galactic supervillain with The First Order led by the crossguard lightsaber-wielding Kylo Ren. Not only that, but we were also promised the return of Han Solo, Princess Leia, Chewbacca, and of course - Luke Skywalker! I still remember the excitement of that first teaser trailer and replaying it over and over again. That marketing buildup was incredible and made the wait for the film's release feel interminable. But then we ended up getting a lot more Star Wars than we knew we wanted.

It's easy to feel like The Force Awakens was a bit of a course correction for the franchise. After George Lucas' often directionless inorganic CGI-laden prequels, fans longed for what they loved about the original trilogy. We wanted characters we could connect with. We wanted a universe that felt real - and not a computer-generated green screen background. We wanted our favorite characters to return and despite 30 years be the same people we remembered as we last saw them during the great Ewok-hosted Stormtrooper BBQ on Endor. And, more or less, that's exactly what we got with Episode VII: The Force Awakens.

When The Force Awakens is great - it's wonderful. Meeting Rey as a scrapper stripping parts out of destroyed ships and selling them for food instantly makes her a character to connect with. The one-time Stormtrooper with a conscience Finn can no longer participate in another massacre and joins the resistance gives the film a sense of heart. Poe and his mission to find Luke Skywalker with the help of his angularly-challenged droid BB-8 adds suspense and excitement for the return of the original trilogy's hero. With Kylo Ren we had a new villain conflicted with his place within the spectrum of the Force.

When The Force Awakens is at its worst - it's steeped in nostalgia so thick it could be served as a dessert pudding. From the introduction of the Millennium Falcon to the overgrown Death Star now called Starkiller Base - that's easily destroyed by a couple of Pew-Pews from an X-Wing blaster; it's just a lot and holds back the originality the first opening moments promised. I fully understand the need to sort of "reset" the franchise a bit after the prequel films and bring back that feeling of the Original Trilogy, so on that level, the nostalgia wins. But you can't build an entire trilogy on the goodwill of nostalgia. It has to go somewhere. Where the "fan service" of Rogue One worked to establish time and place for the story, here it's pure 100% member berries - for better or worse.

Looking back at this Sequel Trilogy, it's very clear that there wasn't a planned direction for the trilogy rather a motive to hit pre-scheduled release dates. The continuing story was simply left to "the next guy" to figure out where things are going to go - whether that be Rian Johnson or Colin Trevorrow or once again J.J. Abrams when things didn't work out. As a standalone film - The Force Awakens is a lot of fun, far better than the prequels in terms of construction and execution, but it's not the best the galaxy far, far away has to offer.

More akin to it's more recent brethren Rogue One, Rise of Skywalker, and The Last Jedi - The Force Awakens didn't endure the final finishing eye of Lucas - this means no revamped color grading but most importantly no grain scrubbing or clumping grain structure. Watching The Force Awakens in native 4K with HDR10; it makes you wish Disney prepped the 4K transfers for the Original Trilogy themselves. While I was generally appreciative of the visual improvements of the OT, they don't hold up against the technical marvels of the newer films. Shot on 35mm film, some digital, and finished at a native 4K digital intermediate - this is a gorgeous reference quality transfer.

Details pop off the screen in ways I didn't immediately enjoy on the previous Blu-ray and 3D Blu-ray releases. Rey's little hut she scratches the days off in - the deteriorated interior of the Falcon - the shiny interiors of Starkiller Base, all of these elements look incredible giving a notable improvement in overall visual quality than the 1080p releases. The texture to Kylo Ren's hood against his black mask and any outside lighting looks amazing.

HDR10 does what it should by enhancing primaries - laser blasts, lightsabers - all primaries get a welcome kick allowing these colors to really pop off the screen. During Hux's speech - the red First Order flags flying in the wind against the bright clean white stormtrooper armor is stunning stuff. Along with that - black levels are spot on allowing for deep inky blacks without crush or haziness. Likewise, whites are on point - again the white First Order stormtrooper armor is impressive.

Comparing this HDR10 presentation to the Dolby Vision presentation on Disney+, Dolby Vision offers only modest improvements but is held back by streaming compromises. Really what it boils down to is a little extra finessing - namely in darker scenes like the opening on Jakku or when Kylo is force-interrogating Poe or Rey - there's better handling of light and shadows with the shading in between. However, the lower bitrate average of 15-25mbps for Disney + vs the low average of 60mbps with much higher spikes on the disc is noteworthy. I felt fine details were lost on Disney+ that was readily apparent on the disc. The streaming also felt crunchier like edge enhancement was employed on top of being a flatter overall feel losing a lot of depth and dimension. For a streaming presentation, it's not bad, but the disc really opens up those bitrates and gives the show some visual oomph.

As with every Disney Atmos audio track to date, The Force Awakens needs some user-end tweaking, but once you get that volume to a place where you like it - man is this a beautiful Atmos mix. From the First Order trooper drop opening with the flickering lights, the fronts, sides, rears, and verticals are employed instantly. Throughout the whole film, there's something going on somewhere in the soundscape keeping all channels active virtually at all times. Even when Rey is alone on Jakku, there's a slight wind effect that moves over the verticals giving a terrific sense of space - but also adds to the lonely existence she lives.

But this is a Star Wars movie and this mix wouldn't be anything without amazing space battles - and we get plenty of those! Laser blasts, the scream of the Falcon's engines, explosions, more laser blasts - all populate pinpoint placement in the mix with great sound effects and added LFE. But that says nothing of the lightsabers! The first time Finn pops on Anakin's old lightsaber - that's a hell of a moment, and it gets better from there. Kylo's crossguard lightsaber adds its own sonic fury to the mix kicking on nice directional effects but also amping up that LFE.

Through it all, this mix ticks off all the right marks with clear dialog and allowing John William's iconic compositions to take flight. Honestly, the only thing keeping this Atmos track from being a true 5/5 is the simple fact that fans keep having to adjust volume levels specifically for Disney releases. While this adjustment isn't all that severe, it is tiresome.

No supplements are on the main 4K disc, instead, all bonus features are found on the included Blu-ray discs. All in all, this is an impressive range of bonus features that if you haven't gone through them already - you're in for a nice set of materials to pick through.

Star Wars Episode VII: The Force Awakens is the nostalgia-laden kickstart to a new era of George Lucas-free Star Wars. J.J. Abrams gives the franchise a thematic reset after the Prequel Trilogy by giving fans a taste of something new while filling the screen with nods and homages to the classic Original Trilogy. It was an exciting starting point, but as later entries revealed - this Sequel Trilogy really didn't know what it wanted to be or where it was going. Entertaining? Sure. Enduring? Only time will tell.

Disney gives The Force Awakens a truly spectacular 4K UHD Blu-ray upgrade that shows how great this disc format can look utilizing a beautiful native 4K transfer with judiciously applied HDR10 grading and a rousingly engrossing Atmos mix. Toss in all previously available bonus features and you have yourself a near reference quality 4K UHD Blu-ray release. Highly Recommended.