The first side-film removed from the proper Skywalker Saga - Rogue One makes its debut on 4K UHD Blu-ray. With the Saga complete - this one stands out as how imaginative these movies can be with familiar characters and events while still managing to be exciting and original. After an already impressive Blu-ray and 3-D Blu-ray release, Disney gives Rogue One a truly glorious native 4K Ultra HD Blu-ray release that steals the show visually while offering a crushingly effective Atmos mix - so long as you tweak your volume ever so slightly. If you're rocking 4K - it's absolutely worth the upgrade. Highly Recommended.

I've had a bit of a back and forth over the last couple years about how I feel about Rogue One and its place inside the overarching saga that is the galaxy far, far away. When I first saw it in theaters I liked it overall but it had issues with the notable reshoots and some of the constant fan service. When I reviewed it for the advance digital release, the second time through was much better than that first time out. The 3-D release only strengthened that position. Now that the Skywalker Saga is over, Solo was just okay, and The Mandalorian crushed it on Disney+ - I'm firmly in the camp that Rogue One was one of the best things to happen to Star Wars in the last few years. 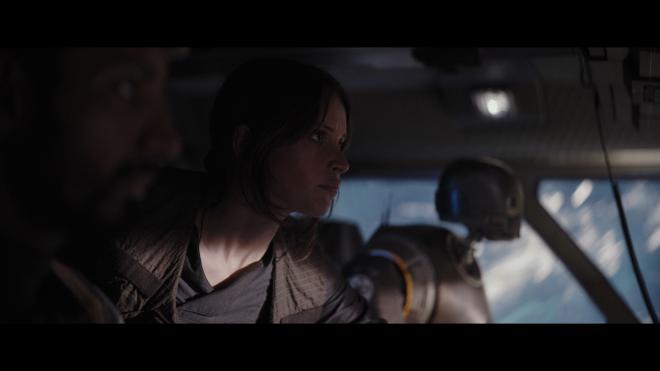 I don't "love" it. It has structure issues and the well-noted reshoots are glaringly obvious, but I'm less bothered by what people call "fan service" in this film. I prefer to call these "nods" than actual "fan service." Yes there are characters from A New Hope peppered throughout the movie but that feels more like an acknowledgment that these individuals existed within the sequence of events. It provides framing. 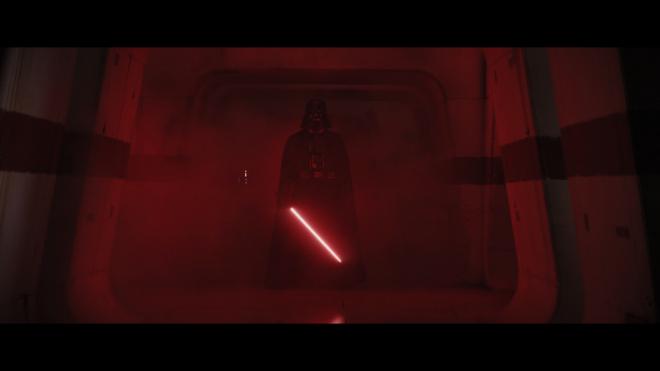 Some take issue with the final Vader sequence and even I have to admit that it's not necessary - but it's so cool I still get excited every time I see it! My only complaint of any of these nods is the final CGI Carrie Fisher moment being so freakishly unconvincing when you pair it against the impressive recreation of Governor Tarkin thanks to Guy Henry and some impressive and intricate visual effects work.

At what now amounts to somewhere around my 10th viewing, I just enjoy this movie a little more every time I see it. It may not have been the smoothest production and it doesn't compare to something like Empire Strikes Back - but of the recent Star Wars adventures in the Disney/Lucasfilm tenure, it's the one that I get the most out of. I keep wanting to come back to it.

Disney unleashes Rogue One to 4K in a three-disc 4K UHD Blu-ray + 2 Blu-ray + Digital set. The discs are housed in a standard two-disc black case with the 4K disc stacked on top of the bonus features Blu-ray disc with identical cardboard slipcover. The disc loads to an animated main menu with traditional navigation options.

I'm a 3-D fan and Rogue One remains one of my favorite 3-D releases from the recent slate of Star Wars films so it's with a bit of curmudgeonly stubbornness that I admit that this new native 4K 2.39:1 HDR10 transfer is the best way to watch this film on disc. It's just beautiful. Back when Disney+ launched with 4K Dolby Vision streams for all of the Star Wars films, I have to admit that I was underwhelmed. While the added color was appreciable, the low streaming bitrate didn't really add much clarity and to my eyes made the film look flat and a bit lifeless. That's not the case on disc.

This disc pops with detail! From the opening frames of Mads Mikkelsen's Galen Erso standing in the grass to the film's big final space battle, there's so much more to see. Simple textures in clothing and skin, as well as sets and production values, are instantly appreciable. I was really impressed with the slums of Jedha and the intricate design work there. CGI effects also gain some added definition lending more weight to their appearance. I felt this was true of the impressive work to make Guy Henry look like Peter Cushing. Conversely, it makes the digital face work for young Carrie Fisher stand out even more. So it's a little bit of a win some, lose some - but overall a positive.

Color grading is also nicely enhanced but not blown out or overtly changed - simply the HDR10 grading is doing what it should and offer extra luminance, stronger primaries, and balanced black levels with enhanced whites. Tipping back and forth between this disc and the available Dolby Vision streaming via Disney+, the Dolby Vision appears to handle some low light black levels better with crisper whites - but this disc gets the benefit of a stronger bitrate and felt the image had more depth and presence that way. That sequence where the dish section of the Death Star slides into place and the shadows fall over the various ships in the area is still gorgeous. Plus that final Vader sequence enjoys a little extra red pop that makes it an even more ominous and intense sequence.

Well… it wouldn't be a Disney Atmos release if it didn't need a little adjusting. Overall I would say that this compensation isn't as severe as other Disney releases. I'm used to adjusting volume a little with any release and this felt like it was within my normal +/- 3 range - not the 5-6 notches of other Disney Atmos audio tracks. To that end what I loved about this Atmos mix was the impressive vertical spacing - especially during the big action beats. The battle sequences are just awesome to hear. They were already impressive but that sense of immersion is much more richly balanced with front, side, verticals, and rear channels all firing with pinpoint placement.

On top of that, you get the added LFE tones here. When the Death Star fires and its targets crumble away - the extra rumble is well noted. Equally impactful for explosions - things get a nice extra KAPOW! factor. The rest of the mix clicks off the checklist offer crystal clear dialog and engaging music cues that work to get you caught up in the drama and action without overblowing the mix.

There aren't any new bonus features crafted for this release - nor are there any on the actual 4K disc itself. everything within this package of bonus features was already available in the previous release. To get the Target Exclusive content you need to redeem the included digital code to unlock those two extra tiny bonus features. What's here is still pretty underwhelming. A commentary or a new making-of doc would have been nice.

For me, Rogue One is the most recent Star Wars film that actually gets better with each viewing. While I did enjoy the newer movies, I even have a small soft spot for Solo - I feel like those films were merely ticking off checklist boxes rather than trying to open up the galaxy this franchise inhabits. Rogue One can still be clunky in places, you can surely feel the reshoots under different creative powers, but the film as a whole is a highly enjoyable one-off. I dig how it was able to sit firmly in the established world and at the same time open things up without being one massive chunk of fan service after another. There are nods and acknowledgments, but nothing as egregious say as bringing back a deceased villain for no real reason.

Disney/Lucasfilm upgrades Rogue One to 4K UHD Blu-ray with an absolutely pleasing upgrade. While I'll still pull out my 3-D copy from time to time, the best way to see Rogue One is this 4K UHD Blu-ray disc offering crisp colors, native 4K details, and a nicely immersive Atmos audio track. Bummer the bonus features couldn't be more interesting. As it is, if you're eager to upgrade Rogue One - you can do so with confidence. Highly Recommended.