Zack Snyder and Joss Whedon bring together iconic superheroes to form the Justice League, the fifth installment in the DC Extended Universe but forgot to give the team a worthwhile evildoer to make their live-action debut memorable. Warner Home Video unites the team on 4K Ultra HD with a reference-quality audio and video presentation but joined by a small set of supplements. Nevertheless, the overall package is Recommended.

As I've mentioned before in the past, the strength of any good action movie — be it a fantasy adventure or a straightforward "blow 'em up" combat flick — comes down ultimately to the authenticity and determination of its villain. As witnesses to the larger-than-life spectacle erupting on the silver screen, we need to know the baddy is capable of uniquely horrific evil (key word here is unique) and lacking our shared sense of morality (but not totally absent so as to make her/him completely unrelatable). Most importantly, the bad person must be powerful enough to give our heroes a worthy challenge to overcome, something that casts a tiny shade of doubt in our heroes' ability to defeat the evildoer. And this, I would argue, is essentially the problem with Justice League, the latest installment in Warner's DC Extended Universe franchise. Five movies in, this feels like a rushed, last-minute science project satisfied with a passing grade rather accomplishing something memorable or seeking to impress the harsh criticisms of judges, which are the comic book fans.

Steppenwolf (voiced by an otherwise competent Ciarán Hinds) is about as bland and two-dimensional a villain as they come, largely motivated by the same single-minded objective as previous entries. It doesn't help the character is also the result of some of the worst motion-capture CGI we've seen in some time, looking distractingly cartoonish and arguably better suited for the DC Universe animated movies. As with General Zod and Enchantress before him, the powerful God seeks to terraform Earth so that he can reign supreme and be worshipped by the survivors. Simple and straightforward, but also somewhat boring because his motivations for the annihilation of the planet are never clearly expressed. All we know is that he and his legions of Parademons doggedly pursue the mysteries Mother Boxes, which are supposed to be the key for this worldwide destruction, but again, what exactly they are and what they do is never fully explained. Steppenwolf is simply a nondescript bad dude with generically bad intentions needing to be stopped. 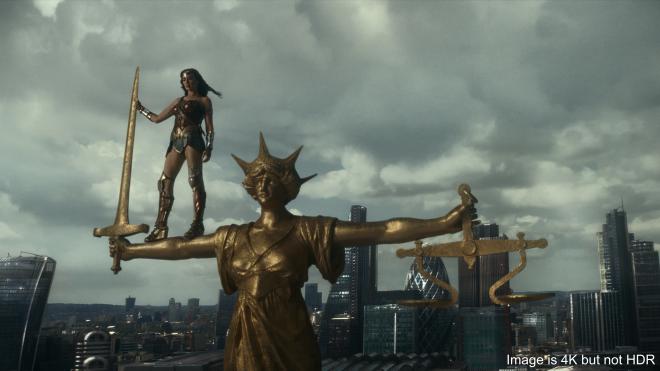 Unfortunately, it would seem even our heroes are a bit of a loss and just as much in the dark as moviegoers. Batman (Ben Affleck) and Diana Prince (Gal Gadot) reunite some time after the death of Superman (Henry Cavill) to form a superhero dream team, three of which are making their live-action debut with minimal background details. Two of them, Aquaman (Jason Momoa) and Cyborg (Ray Fisher), are reluctant to become card-carrying members until the danger comes to close to home, but The Flash (an outstandingly funny Ezra Miller) immediately jumps at the opportunity before Affleck's Bruce Wayne can even finish listing the benefits of membership. Thankfully, even though Steppenwolf doesn't prove to be a worthy adversary on screen, the real joy of this big-budget production is the unexpectedly witty camaraderie between the cast, creating a genuinely playful quality that injects some much-needed humor to an otherwise darkly serious franchise. While the rest of the world falls apart, the League, at least, is fun to watch.

Alas, this fellowship to destroy evil is often undermined by the movie's noticeably awkward pacing and occasionally jarring tonal shifts. Synder and Whedon are so drastically different from one another that viewers could potentially point out Snyder and Whedon's contributions. Amazingly, and in spite of the few drawbacks, Justice League somehow manages to remain a relatively entertaining popcorn feature. While Miller's Barry Allen and Momoa's Arthur Curry deliver some of the more memorable funny bits, the action sequences are engaging and visually spectacular, perhaps due to Whedon, but sadly, that's about as high praise as this production will justly earn.

Warner Home Video brings Justice League to Ultra HD Blu-ray as a two-disc combo pack with a flyer for an UltraViolet Digital Copy. When redeeming said code via WB.com and VUDU, it includes the SD, HDX (1080p) and 4K with Dolby Vision and Dolby Atmos. The dual-layered UHD66 disc sits comfortably opposite a Region Free, BD50 disc, and both are housed inside a black, eco-cutout case with a glossy, lightly-embossed slipcover. At startup, viewers are taken to a generic static screen with usual options along the bottom and music playing in the background.

Legendary heroes are united on 4K Ultra HD by the superpowers of a jaw-dropping, reference-quality HEVC H.265 encode with Dolby Vision HDR.

Almost immediately in the opening moments, the screen ignites with a sensational display of pitch-perfect contrast and spot-on brightness during Batman's encounter with a petty criminal and a Parademon. The 1.85:1 image is awash in luxurious, true-to-life blacks and inky rich shadows that penetrate deep into the screen, providing the 1.85:1 image with an excellent three-dimensional depth while also giving the action an attractive neo-noir feel to it. Amid the gloominess, brilliantly clean whites radiate through the darkness, beaming with such an intensity that should serve excellence demo-material for testing a display's peak luminance. Viewers can make out the most minute detail and feature in the darkest, bleakest corners of the frame while the street lights enthusiastically glow. Specular highlights are equally astonishing, giving the edge of clouds a realistic shine from a distance while also exposing every detail in the absolute brightest moments, such the lightning bolts of The Flash and seeing the tiniest line in the plume of explosions.

Compared to other DC movies, Justice League is arguably one of the more colorful installments to the franchise, with Wonder Woman, of course, taking top prize. And on UHD, our favorite superheroes unite with an astounding array of rapturous colors washing over the entire screen with a pulsating energy that should give owners another reason for enjoying the movie. The Flash's red outfit is an amazing combo of crimson metallic pieces over a thick, cherry-ruby fabric, which is still distinctly different from Wonder Woman's deep, wine-colored top. The bright, candy red light from Cyborg is a separate shade from the orangey-rose glow emanating from the Parademons, and Steppenwolf's armor actually has a bluish metallic shine to it. Warm secondary hues are equally sumptuous and striking, and the final climactic battle is, hands down, the movie's memorable, demo-worthy moment. The 4K presentation is awash in distinct glowing yellows, fiery oranges and ecstatic purplish magentas that never bleed into one another.

Shot on a combination of traditional 35mm film and digital cameras, which was later mastered to a 2K digital intermediate, the freshly-minted transfer also displays razor-sharp definition and resolution from beginning to end. The tiniest, most minuscule feature in each outfit worn by the heroes is crystal-clear, including Cyborg's CG metal body where the individual colored wires can be practically counted and every little moving gear or part is revealed. The smallest ornate detail in Wonder Woman's costume is exposed while each fish-like scale and elaborate piece in Aquaman's more-regal-like attire can be appreciated. Most impressive, if not also memorable, is seeing the battle scars, scratches and wounds on Batman and The Flash's costumes. Facial complexions are highly-revealing with even more realistic lifelike textures and flesh tones, and buildings show every crack and imperfection. Little pebbles on the roads of the small Russian village and debris flying in every which direction are distinct, making this a gorgeous and easily one of the best Dolby Vision HDR presentations we've seen this year so far.

The League also springs into action equipped with an awesome, demo-worthy Dolby Atmos soundtrack that puts viewers right in the middle of the pandemonium. The surrounds are continuously layered with random sounds of electronic equipment in Bruce Wayne's underwater lair or the ambient, bustling activity of the city, maintaining a terrific 360° soundfield during quieter, more dialogue-driven moments. When the battle erupts on screen, the room truly comes alive with a variety of noises distinctly darting all around, from Batman's vehicles and water crashing against a wall to Parademons flying above either to the back or the front of the room. Fantastically sustaining an immersive hemispheric soundscape for most of the runtime, debris whizzes overhead and rains down in every direction, voices echo into every speaker effectively with an excellent sense of realism, and Danny Elfman's score surrounds the listener.

Speaking of which, Elfman's music marvelously spreads across the screen and into the front heights for a highly-engaging half-dome wall of sound while the action flawlessly and convincingly pans across the three channels. The ear-piercing chaos exhibits superb detailing and distinction in the mid-range, delivering crystal-clear clarity in The Flash's electrifying speed, every laser-like blast from the Parademon's weapons and in the ringing crunch of metal. A thundering and authoritative low-end provides those same moments with an excellent sense of presence and weight while the deep, throaty roar of Batman's vehicles and the explosions energizes and resonates across the entire room. Through all this mayhem and visual insanity, the dialogue remains pristine and prioritized so that listeners never lose out on the witty banter.

Road to Justice (HD, 14 min): An overview on the fifty-year history of the Justice League with interviews of comic creators talking about the characters and the team's transition from comics and animation to film.

Heart of Justice (HD, 12 min): The cast shares their thoughts on Batman, Wonder Woman and Superman.

Justice League: The New Heroes (HD, 12 min): A few minutes on The Flash, Aquaman and Cyborg.

Suit Up: The Look of the League (HD, 10 min): Costume designer Michael Wilkinson shares his creative process and the work that went into the unique style of each character's costume.

Technology of the Justice League (HD, 8 min): Self-explanatory piece on the advanced tech of the team with thoughts on the unique design of the costumes and their application.

The Return of Superman (HD, 2 min): Essentially, a pair of deleted scenes showing what amounts to Snyder's version of Superman's return where the Man of Steel makes an appearance in his black suit.

Justice League finally unites DC's trio of iconic superheroes, Batman, Wonder Woman and Superman, while also introducing The Flash, Aquaman, and Cyborg for their live-action, feature-length debut. Although the camaraderie and humor of the team is an entertaining highlight of the production, making it at least a fun watch, the overall movie suffers from pacing issues, odd tonal shifts, and a rather dull god-like villain. The team assembles on 4K Ultra HD with a stunning, reference-quality Dolby Vision HDR presentation and an outstanding Dolby Atmos soundtrack, but the supplements are on the light side even if they are a worthwhile watch. Nevertheless, the overall package is recommended for both fans of the movie and AV enthusiasts hungry for more Dolby Vision and Dolby Atmos demo-material.

Sale Price 18.96
List Price 21.99
Buy Now
3rd Party 4.15
In Stock.
See what people are saying about this story or others
See Comments in Forum
Previous Next
Pre-Orders
Tomorrow's latest releases