Twenty years later, George Lucas's Star Wars: Episode I - The Phantom Menace is Darth Vader's origin tale better appreciated as laying the groundwork for a grander vision and the pedestrian rise of the Sith. The Ultra HD edition arrives to home theaters with a passable 4K HDR10 presentation, complemented by a satisfying Dolby Atmos soundtrack but porting over the same set of supplements. Nevertheless, the overall package is Worth a Look for fans.

Twenty years ago, The Phantom Menace arguably marked a cinematic milestone in a few areas with the first and foremost being a return to a galaxy far, far away since 1983's Return of the Jedi. Ravenous for a new adventure to the fantasy world populated by space cowboys and samurai wizards, famished followers flooded cinemas with mile-long lines for purchasing tickets and later camping in front of buildings for several days.

Unfortunately, with a sixteen-year pause generating outrageously high expectations, the first episode of the prequel trilogy was disappointingly mediocre, made all the more disheartening by also being George Lucas' first directorial effort since 1977's A New Hope. The excitement of seeing a young Obi-Wan Kenobi meet the Force-sensitive, pod-racing maniac Anakin and Queen Amidala is sadly ruined by the clownish hijinks of Jar Jar Binks, and the anticipation for a fight between Qui-Gon Jinn and Darth Maul is weighed down by seemingly endless debates of governmental bickering.

Decades later, The Phantom Menace can now be mildly enjoyed and somewhat appreciated as both the origin tale of the iconic Darth Vader and the rather pedestrian rise of the Sith. 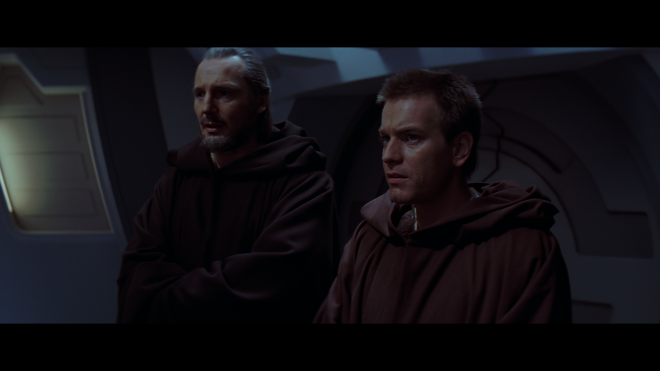 Walt Disney Studios Home Entertainment brings Star Wars: Episode I - The Phantom Menace to 4K Ultra HD Blu-ray as a two-disc combo pack with a flyer for a Digital Copy. When redeeming said code via RedeemDigitalMovie.com or MoviesAnywhere, users have access to the 4K digital version in Dolby Vision HDR with Dolby Atmos audio. The dual-layered UHD66 disc sits comfortably opposite a Region Free, BD50 disc, which is identical to the 2011 Blu-ray containing all the bonus material. Both discs are housed inside a black, eco-vortex case with a glossy, lightly-embossed slipcover. At startup, viewers are taken to a static screen where owners can choose between the start of the movie or look through an animated menu screen.

Shot mostly on traditional 35mm with some footage coming from Sony's early HD digital cameras, which was limited to 1080p resolution, Episode I has had a rather problematic history on home video. For the DVD, the camera negatives were tweaked when scanned to a 2K digital intermediate to better match the HD footage, resulting in several video artifacts inherent to the source. In preparation for the Blu-ray box set, a 3D re-release and to secure the franchise's longevity, producers made further adjustments and enhancements to the aforementioned elements before creating a new 4K DI, such as updating the visual effects work with the latest technology and replacing the puppet Yoda with a CG-animated Yoda. And for the Ultra HD edition, that DI was used for creating this new HEVC H.265 encode.

The end result is, frankly, a mixed bag, teetering between passable and strong but ultimately somewhat disappointing considering the legacy of the franchise. For a majority of the runtime, the 4K video enjoys a moderately good uptick in overall definition, showing just a tad sharper lines in the various spacecrafts, the production design and the droids along with mildly better clarity in the clothing and hair. Due to the CGI of the period, there are also many good chunks of poorly-resolved, blurry sequences distracting from its best moments, and the comparative difference to the Blu-ray is near negligible. Much of this can be chalked up not only to limitations of the technology at the time, but the early DNR efforts have also permanently scrubbed away the finer details. On top of that, there is a good amount of haloing baked into the source and many instances of mild aliasing along the sharpest edges.

Notwithstanding, the 2160p transfer offers a couple small gains over its HD SDR counterpart, mainly showing improved contrast and brightness. The action and conversations are brighter with deeper, truer blacks and more vivid whites while specular highlights are crisp and gleaming, providing the 2.39:1 image with better dimensionality and an eye-catching sparkling shine on metallic surfaces. However, several occurrences of posterization and prominent blooming rear their ugly heads, further hindering the overall quality. Thankfully, the color palette arguably benefits the most with primaries looking fuller and more saturated, especially the deep crimson red in Maul's face and the lively greens of the foliage on Naboo. Meanwhile, secondary hues are warmer and richly-rendered with the tans and browns on Tatooine looking particularly more dynamic and varied while flesh tones appear peachier and more accurately rendered.

Despite these small improvements, however, the overall 4K HDR10 presentation ultimately offers a very small upgrade over the previous Blu-ray. (Video Rating: 62/100)

On a more positive note, the Sith rise to power on Ultra HD with a wildly entertaining and outstanding Dolby Atmos, giving fans a noteworthy step-up over its DTS-HD MA counterpart.

And as many home theater hobbyists already know, the highlight of the movie is easily the podrace sequence where audiophiles are treated to an excellent mid-range, exhibiting distinct clarity and detailing every time the engines burst and shriek across the screen. Imaging feels continuously broad and expansive with background activity bouncing between the three front channels and the top heights with flawless fluid movement, creating a highly engaging half-dome soundstage.

Amid the chaos, vocals are, for the most part, well-prioritized, except that Jar Jar's mush-mouth accent sometimes doesn't come through very clearly. The low-end, on the other hand, is consistently booming and robust, providing the visuals with a palpable, wall-rattling weightiness that will make bassheads happy.

At the same time, the throaty exhaust of engines roar and echo all around the room while the individual podracers speed from the surrounds to the fronts and back again with convincing effectiveness, thrusting the listener into the middle of the mayhem. On several occasions, spaceships smoothly pan through the overheads and into the rears to generate a terrifically satisfying hemispheric soundfield, making this object-based track an awesome listen. (Dolby Atmos Audio Rating: 94/100)

For this UHD edition of The Phantom Menace, the same collection of bonus material from previous releases is ported over and spread across a pair of accompanying Blu-ray discs.

Given the enormous anticipation and expectations surrounding the George Lucas production, The Phantom Menace is arguably a letdown, feeling more like a two-hour set-up and exposition than the start of an exciting return to the galaxy far, far away. Revisiting the first chapter of the prequel trilogy twenty years later, however, has garnered Episode I some small level of appreciation, better seen as laying the groundwork for a larger, grander vision ahead. The movie lands on Ultra HD with a somewhat disappointing yet nonetheless passable 4K HDR10 presentation, but the visuals are thankfully complemented by a highly satisfying Dolby Atmos soundtrack, offering fans a mild upgrade over its Blu-ray counterpart. Porting over the same set of supplements as previous releases, the overall UHD package is worth a look.