George Lucas brings his original trilogy to a close with Star Wars Episode VI: Return of the Jedi. A rousing conclusion that is guilty of being a little too cuddly thanks to some primitive warrior teddybears - but there is an epic scale to this film that can't be denied - and will leave you cheering at the end. Disney delivers a respectable 4K UHD Blu-ray release with HDR10 as well as a strong Atmos audio mix. All of the previous bonus features from past releases has been ported over. It may not be the greatest of the Star Wars films - but it's pure joyful fun and looks and sounds better than ever - Recommended.

I wasn't in the theater for A New Hope. I wasn't born in time for The Empire Strikes Back. However, at roughly 10-months old my parents took me to Return of the Jedi! Well… to be accurate they took my 6-year-old sister to see Return of the Jedi and they brought the infant me along for the ride. My first real memory of Return of the Jedi was from around when I was 3-years-old and my dad bringing home a rental copy of the movie. My sister and I were eager to see it, itching to watch Luke, Han, Leia, and Chewbacca take down the evil Galactic Empire! My dad teased us the entire week that he was going to bring it home after work that Friday. Friday arrived, my dad came home and out of character immediately starting going upstairs - leaving me and my sister in complete suspense if he rented it or not. Halfway up the stairs, he pulls the tape out of his overcoat pocket. I can only imagine how deafening our shrill childish screams were. 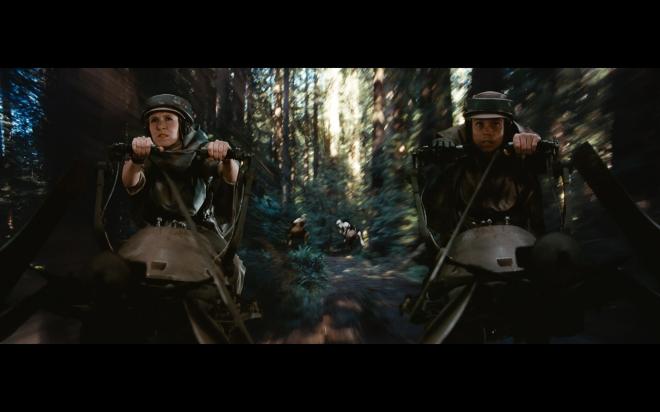 As a child - Return of the Jedi was my favorite Star Wars movie. It was the one I watched again and again. Once the movie was over it'd hit rewind and start it from square one. I loved Jabba's grimy palace, the awesome music sequence, the rancor battle with Luke, the Ewoks, the final lightsaber battle with Luke and Vader, and the destruction of the final Death Star. When you're a little kid there's so much to love about this one. But as I grew older, I started to see the simplistic narrative flaws of the film. That sense of wonder of the first film was missing and that drive and focus of the second were absent. Return of the Jedi starts to feel more like a movie going through the motions than setting a bold course for science fiction storytelling. But that's okay - it's perfectly entertaining and succeeds in wrapping up the story.

A lot can be said about the numerous changes Lucas has made to this one over the years so there's no need to roll down that dusty road again. While admittedly I do skip the new Jabba's palace CGI dance number - I don't mind everything else. The changes didn't ruin the spirit of the film for me - even if they are a bit obnoxious. As I wait for the day when the original theatrical cuts are restored - legally at least - I'll still happily pull out this 4K disc.

As with A New Hope and Empire Strikes Back - Return of the Jedi sports a native 4K HDR10 transfer that is the sum of its parts. Like its franchise siblings, this transfer was prepped around the time of Lucas' scheme to release the films in theaters in 3D and endured some DNR leaving an image that is often stunningly well-detailed but somewhat inorganic. However, like there rest of the original trilogy, the grain field can appear frozen or clumpy at various points or nice and film-like leaving an image that's stunning if imperfect.

Like I mentioned, details are impressive here allowing you to fully appreciate facial features and imperfections. You can practically count the threads or the hairs on Chewbacca's head or Jabba's slimy skin texture. Even older action sequences like the speeders on Endor look great - showing that if it ain't broke don't fix it. In contrast, the 1997 "Special Edition" visual effects additions appear very soft and stand out compared to the live-action elements - especially the more recently shot Boba Fett footage. But that's par for the course for most of the new visual effects inserts. The new Sarlacc looks like a CGI Audrey II from Little Shop of Horrors - if they were going to go the distance and add more special effects - couldn't they have at least redone the 1997 material? The older the "fix" the softer the overall image quality.

Moving along, black levels and whites are a terrific presence thanks to the added HDR10 refinements - you don't need to look any further than the opening shots where Vader lands at the under-construction Death Star with the shiny black floors and the bright white stormtrooper armor. This effect is just as glorious when the Emperor arrives. Endor is a really beautiful piece of scenery with vivid lush earth tones. After borrowing a friend's copies - I avoided buying the original Blu-ray releases of these movies and I'm glad I waited because even with some unfortunate anomalies, this is the best Return of the Jedi has looked on home video - at least legally.

Return of the Jedi scores a fresh new Dolby Atmos mix that hits all the marks - so long as you tweak your volume a tad. As with all other Disney Atmos releases of late - this one needs about a two or three notch shift in order to be fully appreciated. Not terrible, and once you get it into position you can forget about keeping your thumb on the volume. The dialog is clean and clear throughout. John Williams' score rings true. The sound effects ripple throughout the soundscape beautifully giving the track a richly immersive quality.

Surrounds are a constant companion of the film with nice subtle effects to keep them engaged. But the main highlight - as is the case with all other Star Wars Dolby Atmos tracks are the action sequences and space battles. That final assault on the Death Star is terrific vertical action with X-Wings and Tie Fighters zipping overhead and down around and back into the front of the soundscape. The final lightsaber battle between Luke and Vader is another amazing moment with the combined crackling effects giving some great LFE impact with Williams' operatic score punching the emotional core.

No supplements are on the main 4K disc, instead all bonus features new and archival are found on the included Blu-ray discs. All in all this is an impressive range of bonus features that if you haven't gone through them already - you're in for a nice set of materials to pick through.

As much as I loved Return of the Jedi growing up as a kid, it's no longer my favorite. Even still - it's a highly satisfying final entry to the Original Trilogy. Even with all of the terrible "Special Edition" edits, I can' help but love the adventure and heart of this film. Hopefully one day we'll legally get our hands on the unaltered original theatrical version, but until then, this release is a sight to see. Disney brings Return of the Jedi to 4K UHD Blu-ray with impressive results allowing for a crisp well-detailed - if slightly imperfect - transfer with HDR10 and an immersive Atmos audio mix that needs just a little tweaking. Toss in some great bonus features and this is a release well worth having on your shelf. Recommended.