After the rebellion's first big win, they're put on their backs and on the run in the thrilling Star Wars Episode V: The Empire Strikes Back. Far and away from the best entry of the franchise, it does everything a sequel should do, build on the foundation of the first, raise the stakes, and leave you with the mother of all cliffhangers. Nearly 40 years after release it still packs an emotional wallop. Disney gives The Empire Strikes Back a fitting 4K UHD Blu-ray transfer with HDR10 and a strong Dolby Atmos audio mix with a fine set of bonus features. Recommended.

Again too young to catch this in theaters, I grew up watching The Empire Strikes Back on another bootlegged tape. Like A New Hope before it, my dad simply copied the rental tape and we wore that thing out through years of repeated viewings. As a kid, this wasn't my favorite of the Original Trilogy. Outside of Yoda and the big lightsaber fight at the end with that big "reveal" between Luke and Vader - it didn't hold my interest very much. All of a sudden when I hit my teens - I got it. I can't count how many times I'd watched this movie as a kid but all of a sudden Empire made sense. and I loved it. 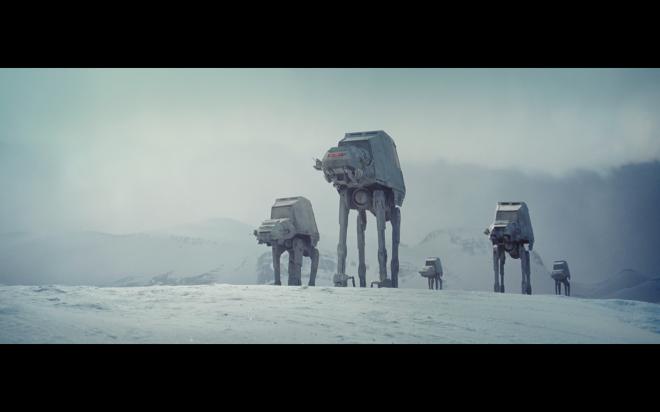 The opening Hoth battle with the walkers, speeders, and snow troopers, Luke's training with Yoda and the importance of his internal conflicts - especially in connection with Return of the Jedi, and then ultimately the appreciation for Han Solo's fate. Maybe it was by the time I hit 12 years old I just wasn't interested in Ewoks anymore? Whatever switch flipped that helped me appreciate this movie, I'm glad it hit because of all the films and shows, Empire is the one that I return to again and again.

It says something about the work that went into this sequel and Ivan Kirshner's direction that it gave Lucas the least amount of wiggle room to "fix." Outside of redoing some visual effects, adding a second or two of wompa carnage, and redoing that hologram conference call between Vader and the Emperor - there's really nothing different here. Some purists may decry the lack of the original cut for this 4K release, but all in all, I don't mind the changes that were made for the Special Edition and subsequent home video alterations. Not necessarily better - but certainly not worse. It's still a great movie and love it every time I roll it.

Sourced from a new native 4K transfer that was prepared around about the same time as when Lucas was getting Star Wars ready for a 3D run, Empire looks amazing but with those pesky caveats. As with A New Hope, a bit of grain scrubbing was employed along with a few other digital alterations over the years. This gives rise to an often beautiful but restrained 4K UHD HDR10 transfer. Again the frozen clumpy grain can appear and it's a bit more unsightly this time around as its most noticeable during the Hoth battle. Where this clumpy grain can appear throughout at various points, it's not as apparent as it is against that bright white snowy backdrop. From then on things appear much more stable.

Even with DNR and the clumpy grain, fine details remain intact allowing you to fully appreciate faces, clothing, textures, and all of the intricate work that went into bringing Yoda to life. He's still one of the best practical effects creations of the franchise and every frame of this transfer allows you to appreciate that work. What really stood out to me were the small details and staining that went into the snow speeders and all of the imperfections of the Falcon interiors as well as the scuff marks on C3PO's brassy exterior.

While primaries do gain a boost allowing blues and reds to pop nicely, they're not showy in this film. This is a pretty drab affair visually and thematically as the rebellion is on its backside. Things only brighten up when we get to Bespin cloud city and Lando adds some flash and pizzaz to the mix. And then the Red on Blue Vader vs. Luke lightsaber battle in the dark chamber is beautiful stuff  Whites are crisp and black levels are nice and inky giving the image a well-maintained sense of depth. On par with A New Hope, I'd argue this is the best this film has looked on home video - at least legally. Could it be better? Sure - and it likely will someday - but for now this will do nicely.

Again, like every other Disney Atmos audio mix - you've got to make some adjustments for volume. In keeping with A New Hope and Rogue One - I didn't feel this adjustment was too dramatic as with previous Disney outings for the audio format. The full Atmos experience is given a grand introduction with the Hoth battle - those speeders zipping around and over the walkers with laser blasts and explosions erupting all around - it's a hell of a sequence! Likewise, when the falcon escapes into the meteor shower, the impacts allow for some great pinpoint placement along the surrounds or verticals and giving some nice LFE rumble.

Through it all, the mix does a terrific job of keeping sides, rears, and the dialog-heavy front/center channels active and engaging. John William's score during Han's carbonite freezing and the emotional swells combined with the range of sound elements is beautiful stuff. When things are relatively quiet on the falcon or when Lando is giving our heroes a tour of the city, there's plenty of atmospheric action going on to keep the surrounds and verticals active with subtle activity. It's another solid audio track for the franchise.

Like the rest of the franchise, The Empire Strikes Back enjoys a robust assortment of bonus features to pick through. There's a lot here but nothing looks to have been added to the mix and is instead the same assortment of features found on the previous releases.

Sequels rarely enjoy the privilege of outdoing the original, but in the case of Star Wars Episode V: The Empire Strikes Back, this entry isn't just better than A New Hope - it remains the benchmark for the entire franchise. None of the films to be released after have come anywhere close to the cinematic achievement found in this entry. All of the character drama, action, visual effects build to a grand emotional final act setting the stage for the big conclusion that would ultimately become Return of the Jedi.

Disney gives The Empire Strikes Back an impressive 4K UHD Blu-ray debut with an often stunning native 4K HDR10 transfer - that suffers the same small caveats as A New Hope - as well as an impressive impactful and immersive Dolby Atmos audio mix. Bonus features are the same impressive package as the previous Blu-ray releases. While I do hope for the original unaltered theatrical versions to make their appearance, this 4K UHD Blu-ray is damned impressive and a welcome upgrade over previous home video releases. Recommended.