When ranking the Star Wars franchise, George Lucas's Attack of the Clones is arguably the worst of the series even though the story provides some relevant details to the overall saga. The sequel lands on Ultra HD with another somewhat disappointing 4K HDR10 presentation but a demo-worthy Dolby Atmos soundtrack. Yet, with the same set of supplements as previous releases, the UHD edition is nonetheless Worth a Look for fans and completists.

In Attack of the Clones, George Lucas did something unprecedented. He returned to the director's chair for a sequel and even more shockingly, somehow made the second chapter in the prequel trilogy worse than its predecessor. Granted, there are some important, relevant details in this follow-up that decently expand upon the overall saga and the Skywalker legacy, such as, and arguably most meaningfully, seeing Anakin and Padmé's budding love affair and the first major battle of the infamous Clone Wars. Of most interest — to me, at least — is witnessing the fall of the Republic's democratic system, Chancellor Palpatine's rise to dictatorial power before revealing his more sinister intentions and the specifics paving Anakin's road to the dark side of the Force.

However, whatever few positives are scattered throughout this 142-minute production are quickly hampered by more mind-numbingly boring political debates, not only within the Senate but also within the Jedi Council. The mystery behind the creation of the clone army and Count Dooku's nefarious involvement, setting the rise of the Empire into motion, is not as engaging as it at first would seem. That part, perhaps, hurts the most since it undermines the introduction of Jango Fett and Boba Fett. The entire movie is made all the worse with laughably bad dialogue from the main protagonists, especially Anakin's stupid quip about sand and Padmé's eye-rollingly cheesy confession to Anakin just before their death sentence.

All in all, the sequel has not aged well over the years and is sadly a dud, the worst of the entire franchise, cozying up right next to Solo. 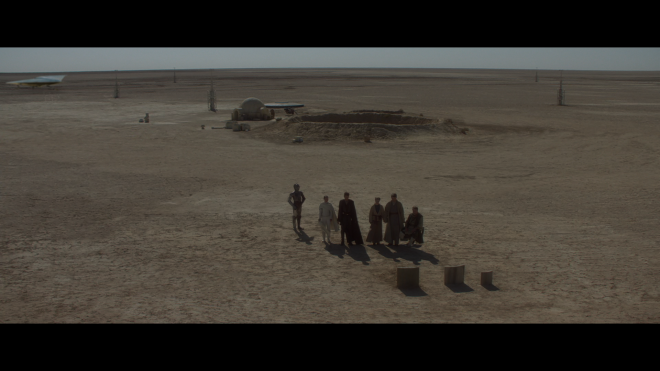 Walt Disney Studios Home Entertainment brings Star Wars: Episode II - Attack of the Clones to 4K Ultra HD Blu-ray as a two-disc combo pack with a flyer for a Digital Copy. When redeeming said code via RedeemDigitalMovie.com or MoviesAnywhere, users have access to the 4K digital version in Dolby Vision HDR with Dolby Atmos audio. The dual-layered UHD66 disc sits comfortably opposite a Region Free, BD50 disc, which is identical to the 2011 Blu-ray containing all the bonus material. Both discs are housed inside a black, eco-vortex case with a glossy, lightly-embossed slipcover. At startup, viewers are taken to a static screen where owners can choose between the start of the movie or look through an animated menu screen.

Similar to its predecessor, Episode II arrives to Ultra HD with a complicated history on home video. As the first production to be shot entirely on digital film using Sony's CineAlta HDW-F900 camera, the elements, unfortunately, come with some inherent limitations that don't translate well to UHD, putting the end result on par with The Phantom Menace. The camera's resolution maxes out at 1080p HD and was later mastered to a 2K digital intermediate, which was reportedly uprezzed to a new 4K DI and used for this strong but nonetheless disappointing HEVC H.265 encode.

Due to those aforementioned limitations, the 2160p upscaled transfer shows little to almost no improvement in overall definition while ruined by several instances of very mild aliasing along the sharpest edges, the blatant application of DNR and a fair amount of posterization in many spots. To be fair, a couple scenes are a step-up over the Blu-ray, like those on Naboo, but the differences are so minimal that it's barely worth noting, especially given that a majority of the visuals were done in subpar CGI and visual effects that haven't aged well.

Other issues native to the digital cameras is a source fixed to 8-bit color depth, which simply means it is not up to the demands and further adds to a less-than-satisfying 4K video. Granted, the contrast and brightness enjoy a slight upgrade with a tad silkier blacks and more radiant whites, but the small boost of the latter also creates some distracting hot spots and blooming that frequently washes aways the finer details. Specular highlights enjoy a brighter, crisper pop, especially around metallic reflective surfaces, but it's a rather minimal jump.

Compared to its HD SDR counterpart, the HDR10 presentation is also sadly hindered by the limited color gamut, so ultimately, the overall palette doesn't gain much other than primaries seeming slightly fuller and reds looking a tad deeper. To be sure, flesh tones are better rendered here, but the rest of the hues remain relatively the same as the HD version. (Video Rating: 64/100)

As bad as the movie and video may be, at least, the Clone Wars erupts in home theaters with an awesome, room-shaking Dolby Atmos soundtrack, delivering some fantastic improvements over its DTS-HD counterpart. Some demo-worthy highlights are, of course, Anakin and Padme running through the droid factory, dodging the robotic arms and the bug soldiers coming from every direction while the Battle of Geonosis surrounds the listening with the chaotic noise of gunfire and various vehicles. Other scenes come with spaceships flying directly overhead, the throaty bursts of engines echoing all around or the local wildlife of Naboo occupying the space above, generating an impressively satisfying hemispheric soundfield.

Meanwhile, John Williams' iconic score enjoys better warmth and fidelity, displaying outstanding clarity and separation in the orchestration. Imaging also benefits from the extra-breathing room, feeling wider and more expansive as various effects discretely and fluid travel between the channels and into the top heights while the mid-range exhibits superb definition with strong detailing during the loudest segments. Vocals remain distinct and precise amid the mayhem. The low-end provides a weighty rumble and palpable presence to every explosion, crash and seismic charge. (Dolby Atmos Audio Rating: 96/100)

For this UHD edition, most of the bonuses from previous releases are ported over and spread across a pair of accompanying Blu-ray discs.

In George Lucas's Attack of the Clones, the filmmaker turns his most annoying creation Jar Jar Binks into a minor secondary character, yet he somehow still managed to make this sequel worst than its predecessor. Although the story provides some relevant history details to the overall Skywalker saga, much of the plot is sadly hampered by more boring political debates at a terribly dull pace, arguably making this follow-up the worst of the entire franchise. The sequel lands on Ultra HD with another somewhat strong but ultimately disappointing 4K HDR10 presentation although a demo-worthy Dolby Atmos soundtrack more than enough makes up for it. Porting over the same set of supplements as previous Blu-ray releases, this UHD edition of Episode II is nonetheless is worth a look for fans and completists.