With a new Star Wars installment hitting screens on a yearly basis, it was inevitable Disney would shoot for the stars and miss, and Ron Howard's Solo: A Star Wars Story is, for me at least, that movie. Preoccupied with allusions surrounding the myth of Han Solo, the sci-fi western is a fun watch to be sure, but it ultimately feels like empty, boastful spectacle. The boastful anti-hero barges onto 4K Ultra HD Blu-ray with a lackluster HDR10 presentation, a mediocre Dolby Atmos soundtrack, and a small but decently entertaining set of supplements. For Fans Only.

In their attempt to pump out a new Star Wars movie every year, Walt Disney was bound to make one bad entry to the galaxy far, far away. It was inevitable. And Ron Howard's Solo: A Star Wars Story is, arguably, that movie. The second spin-off prequel after the far superior Rogue One, this episode focuses on the ruggedly brazen, cheeky and overconfident Han Solo, who apparently lived his childhood without a last name until a pivotal moment early in the film. The dearly-beloved character was made famous by Harrison Ford in George Lucas's original trilogy, but here, Alden Ehrenreich steps into the massively-huge shoes and does decently well as a younger, slightly cockier version of the western anti-hero in space. Rather than simply imitate Ford, his mannerisms and speech style, Ehrenreich evokes Han's signature swagger and makes it his own with a charm and charisma that brightens the screen. He carries Han's hard-bitten hubris with an assured familiarity while also exposing a wounded fragility to the personality.

From a script Lawrence Kasdan co-wrote with his son Jonathan, the plot, which is set between Revenge of the Sith and Rogue One (or sometime around 13 – 10 BBY for the more hardened fans), follows Solo on his most infamous and celebrated adventures while also introducing some lesser known details. In the early part of his life, turns out, an orphaned Han survived on the planet Corellia as a petty thief for a local gang, and this is also where he met childhood sweetheart Qi'ra (Emilia Clarke). The story uses a failed escape from the gang and the planet as the catalyst to Han's criminal exploits, turning the movie into a long-drawn-out rescue mission. For anyone who's seen the previews and possesses some familiarity with the original New Hope, it's not a spoiler to mention that not only do these lovebirds eventually reunite, but their romance also doesn't result in a happy ending. It doesn't help there is little to almost no chemistry shared between Clarke and Ehrenreich, or that Howard never really has us rooting for these two to run away together. 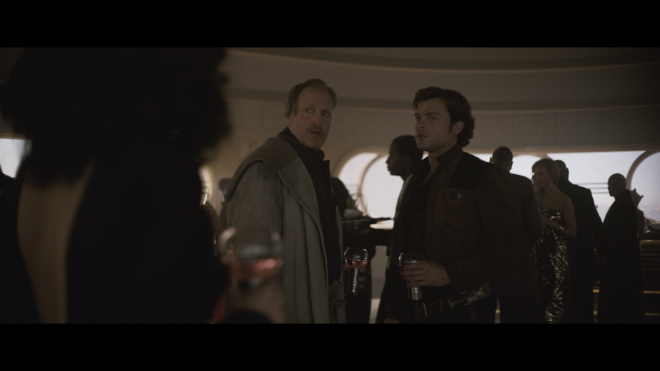 More importantly, this is where the dilemma with the tenth installment to the franchise starts to become apparent. It's our awareness and knowledge of the character and the history of the series in general. The issue is not so much in the audience as it in the filmmakers themselves, more intent on making sure to touch on specific events and as though ticking off a checklist.

Essentially, the problem is nostalgia, making a movie that feels very episodic — at times, near the point of distractingly annoying — as well as purely meant to have fans reminisce. Oh, so that's how Han and Chewbacca met. Their smuggling career is thanks to Woody Harrelson's Tobias Beckett. Got it! And of course, let's shove in a scene with Han winning the Millennium Falcon from Lando Calrissian (a wonderful Donald Glover) and make it an adorable confrontation. And lest we forget, we absolutely must show the legendary Kessel Run.

And so it is, Solo runs its 135-minute course through thick rose-tinted glasses, preoccupied with allusions to specific factoids surrounding the myth of Han Solo rather than an engaging tale about a dearly beloved and iconic character. Watching the sci-fi western occasionally feels like sitting next to that friend who knows more about the series and its ever-expanding universe than you do, elbowing you every few minutes when some subtle or obscure reference is made. It's okay and perhaps a little amusing at first, but after a while, it becomes somewhat of a nuisance as it takes away from simply enjoying what should be fun escapism. And Howard does his best at providing just that, working with talented cinematographer Bradford Young (Selma, Pariah, Arrival) at designing visually exciting action sequences, elevating Kasdans' plot just beyond humdrum — arguably, falling just above The Phantom Menace and Attack of the Clones. However, much like the character self-aggrandizing, the movie loves boasting about itself but doesn't quite live up to the hype.

Walt Disney Studios Home Entertainment brings Solo: A Star Wars Story to 4K Ultra HD Blu-ray as a three-disc combo pack with a flyer for a Disney Digital Copy, dubbed "Ultimate Collector's Edition." When redeeming said code via RedeemDigitalMovie.com or Movies Anywhere, owners have access to the 4K UHD digital version while VUDU users can enjoy the Dolby Vision HDR version with Dolby Atmos. The dual-layered UHD66 disc sits comfortably atop a BD25 disc containing all the supplements while a Region Free, BD50 disc sits on the opposing panel. All three are housed inside a black, eco-elite case with a lightly-embossed, glossy slipcover. At startup, viewers are taken directly to a menu screen with full-motion clips and music playing in the background.

With his usual presumptuous, boastful swagger, Han barges through the Ultra HD doors thinking he's the hottest ticket in town, but sadly, his swollen head is quickly deflated when it turns out the HEVC H.265 encode he's flying is only passably good and, dare I say it, somewhat disappointing.

Shot on separate Arri Alexa cameras with resolution levels ranging between 3.4K and 6.5K, the 2160p transfer, which was likely struck from the 4K digital intermediate, is highly-detailed with excellent, well-defined lines in the costumes while small features of the various locations and buildings are plainly visible. The individual hairs of Chewie's furry body are distinct, the intricate carvings on Enfys Nest's mask are discrete, and we can clearly make out every button and wire inside the Millennium Falcon. Also, many extreme wide shots of the landscape are attractive and reveal great clarity in the clouds. However, there are several moments which are not quite up to snuff and even tend to look blurry. Much of this is observably related to the poor brightness levels, delivering heavily muted, dull and dark-gray blacks. Occasionally, certain articles of clothing seem a tad more accurate, but on the whole, shadows are disconcertingly poor, murky and dreary, which often consume background information and make for a pretty flat and lackluster 2.39:1 image.

By all appearances, the 4K presentation shows signs of being the result of the filmmakers' creative vision and not an issue with the encode itself, making the look arguably faithful to those intentions, which in turn, makes a proper assessment challenging. Bradford Young's heavily-stylized photography appears to be going for a gritty, rough and unromantic charm of the character's adventures, and this includes shooting the entire film with a heavily understated but earthy yellow palette. Primaries, to be sure, are accurately rendered and animated, especially the blues in the sky and some of the steely, cold environments while reds in some of the clothing have a nice, spirited pop. Secondary hues, on the other hand, are noticeably limited and restrained though balls of fire and explosions light up the screen with vibrant fiery-red oranges. Much of the limitation seems related to a considerably low-key and toned-down contrast, making whites appear decidedly lifeless, grayish and drab looking. Specular highlights are pleasing in a few shots, like sparks or silver lining of clouds, but on the whole, they tend to fall flat with little detailing within the brightest areas. (Video Rating: 64/100)

The fantasy space western daredevils its way through home theaters with a surprisingly mediocre and unremarkably average Dolby Atmos soundtrack. This may not come as much of a surprise since Disney Studios has unfortunately made it a habit over the last couple years of severely altering the original theatrical presentation for home audio. But within the Star Wars universe, Solo is perhaps the worst, noticeably lacking activity in the surrounds and ceiling channels for long stretches of time and even during some of the more visually-thrilling sequences. In all fairness, many action-packed scenes do come with a variety of effects discretely panning into the sides and overhead, either ships soaring through space or laser blasts zooming across the room. Bits of debris and other minor atmospherics also travel all around in a few occasions with the infamous Kessel Run and Maelstrom scene being an amusing highlight, but such moments are far and few in between. Overall, the track ultimately fails at generating a satisfying hemispheric soundfield.

Much of the action and attention is spread across the front soundstage, littered with a variety of background activity that flawlessly moves between the three channels and off-screen, creating a wide and spacious setting. A few of those noises also travel into the front heights although they're not particularly effective and have more an echoing effect than discrete directionality. More disappointing is a rather flat and uniform mid-range that never pushes into the higher frequencies, making the louder action sequences feel lackluster and restrained. There is plenty of clarity, to be sure, but in order to better appreciate it, owners will have to raise the volume to reference levels. On the plus side, the dialogue is intelligible and precise from beginning to end. The low-end does not stand out in any significant way, but it's adequate and plentiful enough to provide the movie with a palpable presence. The Kessel Run scene and a few explosions nicely reach the 28-30Hz depths, but like the surrounds, such moments are sadly far and few in between (bass chart). (Audio Rating: 74/100)

All supplemental material can be found on the second Blu-ray disc.

With a new Star Wars installment hitting screens on a yearly basis, it was inevitable Disney would shoot for the stars and miss, and Ron Howard's Solo: A Star Wars Story is, for me at least, that movie. Preoccupied with allusions surrounding the myth of Han Solo, the sci-fi western is a fun watch to be sure, but it ultimately feels like empty, boastful spectacle. The boastful anti-hero barges onto 4K Ultra HD Blu-ray with a somewhat disappointing and lackluster HDR10 presentation, a mediocre Dolby Atmos soundtrack, and a small but decently entertaining set of supplements. For Fans Only.

Sale Price 22.99
List Price 39.99
Buy Now
3rd Party 13.25
In Stock.
See what people are saying about this story or others
See Comments in Forum
Previous Next
Pre-Orders
Tomorrow's latest releases