On November 4, 1979, as the Iranian revolution reaches its boiling point, militants storm the U.S. Embassy in Tehran, taking 52 Americans hostage. In the midst of the chaos, six Americans manage to slip away and find refuge in the home of Canadian Ambassador Ken Taylor. Knowing it is only a matter of time before the six are found out and likely killed, the Canadian and American governments ask the CIA to intervene. The CIA turns to their top "exfiltration" specialist, Tony Mendez, to come up with a plan to get the six Americans safely out of the country. A plan so incredible, it could only happen in the movies.

The last few minutes of Ben Affleck's political thriller 'Argo' are the most intense and suspenseful moments in recent film memory, and in a story that slowly builds in tension and uncertainty, that's exactly how they should be. In those final moments, as six U.S. diplomats nervously try to board a plane during the Iranian hostage crisis, we want the viewing experience to be as nerve-wracking and edge-of-your-seat maddening as possible. The group includes CIA operative Tony Mendez, played terrifically by a somber Affleck himself, who planned the best bad idea the government could devise at the time. As the Swissair flight begins to close its doors and prepare to take off, the group is still trying to convince a checkpoint that they are a Canadian film crew on a location scouting trip for a 'Star Wars' ripoff.

If you're familiar with the real events on which Chris Terrio's screenplay is based, then the outcome should be no surprise. And even if you're learning about this small tidbit in the history of U.S.-Canadian relations for the first time, the way in which the action unfolds remains standard procedure for the genre. With assistance from cinematographer Rodrigo Prieto and editor William Goldenberg, Affleck never deviates from the classic Hollywood methods for creating tension and suspense. And frankly, the film is all the better for it. I would even go so far as to suggest that that's the reason this film works so superbly as popcorn entertainment.

We walk away from 'Argo' feeling awesomely satisfied and exceedingly entertained. Structurally, Terrio's script is practically perfect, albeit with a great deal of creative license. From the start, as Iranian militants storm the U.S. embassy in Tehran, tensions are high, with staff members scrambling desperately to destroy documents while arguing about an escape plan. From there, we move speedily from one conflict to the next, adding to an already overwhelming state of affairs, and ultimately erupting in a dramatic climax that leaves you gripping your chair's armrests as your eyes bulge from anxiety. 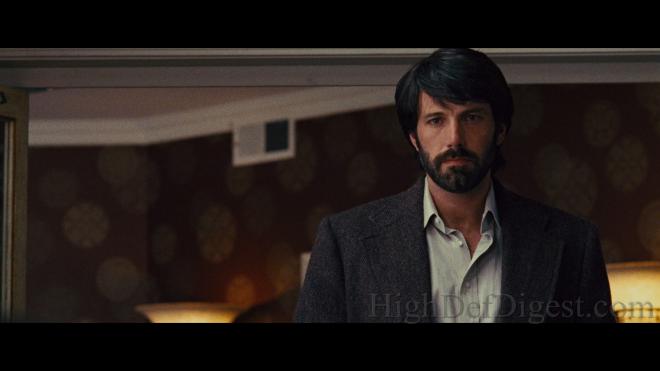 Sitting in the director's chair for the third time, Affleck depicts the action with incredible precision and great attention to the smallest detail while keeping the pace hurried and frenzied. Following the success of 'Gone Baby Gone' and 'The Town,' Affleck seems perfectly comfortable behind the camera, proving himself an adept and proficient filmmaker. With 'Argo,' he confidently surpasses his previous work by demonstrating his technical skill — his talent for framing the image for the best suspenseful result. The political thriller is essentially all about craftsmanship, about constructing suspense and sustaining it in spite of viewer expectations and knowledge of the outcome. The aforementioned airport sequence, with its variety of minor conflicts and parallel action, reveals Affleck's skill for tuning it just right. It doesn't matter if we already know the outcome; we want to see it unfold before our eyes.

'Argo' is so well-crafted that we don't even notice — or perhaps care — that the film ultimately brings nothing new to the table. Clearly demonstrating his skill behind the camera, and doing a remarkable job blurring the lines between fact and fiction, Affleck keeps his audience's attention constantly focused on the question of "will they or won't they?" In fact, it's a downright shame he did not receive an Oscar nomination, and the Academy should honestly be ashamed of themselves for not noticing what Affleck has accomplished. Still, with excellent performances from John Goodman and Alan Arkin, the film remains one of the best of 2012 and is a mandatory watch for all movie-lovers out there.

Warner Home Video brings 'Argo' to 4K Ultra HD Blu-ray as a two-disc combo pack with a flyer for an UltraViolet Digital Copy and glossy slipcover. At the moment, we are unable to verify the size of the content, but the dual-layered UHD66 disc sits comfortably opposite a Region Free, BD50 disc inside a black, eco-cutout keepcase. At startup, the disc goes straight to a static menu and music, and the package only includes the theatrical cut on both formats.

The picture shows sharper, slightly better defined lines in the architecture of Iranian buildings, streets, and the marketplace. As in the BD, the stitching in the groovy 70s clothes, stylish hairdos, and the gaudy interior furnishings of the Canadian ambassador's home are crystal-clear and discrete. Facial complexions are stunning and lifelike, particularly during close-ups, with visible pores and every negligible blemish exposed. The deliberate photography comes with a few noticeably soft moments, but nothing detrimental.

Along those lines, the cinematography of Rodrigo Prieto ('Broken Embraces,' 'Water for Elephants') displays a strong yellow-amber push with lots of earth tones throughout, giving the film an aged, antiquated feel that's fitting to the plot's setting and period. Thankfully, this doesn't affect the overall palette, as primaries remain richly-saturated and often sumptuous. The blue of the sky has a welcomed photo-realistic feel while the reds in clothing, lights and even the ends of lit cigarettes are vividly intense. Secondary hues are also bolder and better resolved, especially yellows, oranges and browns looking a bit more vibrant and true-to-life. Facial complexions are not only appropriate to the region's climate and appear more lifelike.

The most visible improvement is the excellent high dynamic range, giving the 2.40:1 image a tad more dazzling presentation. Though Prieto's intentional photography creates a subdued and somber feel to the story, contrast is nonetheless better balanced with radiant specular highlights along the edges of the clouds in the sky, various antennas on roofs and the metal tops of cars. Incredibly, brightness levels are better resolved here with a inky rich, true blacks and exceptional gradational differences in the darkest portions of the frame, providing the film with beautiful cinematic quality. Shot on various film stocks and cameras, the 4K transfer, likely made from the 4K digital intermediate, is showered with natural film grain that's more prominent in some places than others, depending on the scenes and the intentions of the filmmakers.

Overall, this UHD presentation of an excellent political thriller will delight early adopters.

The rears deliver discrete effects with excellent directionality and flawless panning while a wide assortment of sounds move throughout the room, creating a highly-engaging and immersive aural experience. Helicopters fly overhead, street traffic is all-encompassing, and the terrifying chants of angry protesters are often enveloping. Quieter segments display a more subtle approach as the wind blows in the distance, the noise of a busy market surrounds the listener, and conversations echo in the large hallways of the CIA.

Being a dialogue-driven story, the front-heavy design displays exceptional channel separation, creating a spacious soundstage. Off-screen effects are discrete and convincing while vocals are precise and well-prioritized in the center. The mid-range exhibits remarkable clarity with several moments pushing into the upper frequencies without fault or a hint of distortion. The low-end is deep and potent, providing action sequences with tremendous weight and substance. The music and song selections demonstrate the quality of the lossless mix best with brilliant depth and superb stereo fidelity. Overall, it's a terrific high-rez track for an intensely suspenseful film.

The commentary can be found on both discs while the rest are available only on BD.

In every practical sense, 'Argo' is your standard, conventional political thriller, but the film is so well-crafted and exceptionally designed that we overlook this fact and simply enjoy the suspenseful thrill-ride. With excellent performances from John Goodman and Alan Arkin, director Ben Affleck demonstrates a remarkable talent for crafting tense, dramatic scenes that make for greatly satisfying popcorn entertainment. This Ultra HD Blu-ray arrives with a great-looking 4K video presentation that's an improvement over the standard BD, but it arrives with the same excellent audio presentation as before. It's all accompanied by a small collection of supplements, making the overall package recommended for fans and early adopters.

Sale Price 24.99
List Price 37.99
Buy Now
3rd Party 9.31
In Stock.
See what people are saying about this story or others
See Comments in Forum
Previous Next
Pre-Orders
Tomorrow's latest releases