The rise of Facebook is the story of a generation. One young man literally changed the way the world interacts and communicates. David Fincher’s The Social Network chronicles Mark Zuckerberg’s college side project into a multi-billion dollar juggernaut against the backdrop of multiple damaging lawsuits. One of the best films of 2010 comes to 4K Ultra HD Blu-ray as part of the Columbia Classics Vol 2 collection in a three-disc set. The upscaled Dolby Vision transfer is an improvement over the old Blu-ray, but overall the least impressive looking of the collection. However, the Atmos mix is exceptional and a worthy upgrade. Highly Recommended.

On the outside of all of the popular campus clubs, groups, and of little to no social standing - Mark Zuckerberg (Jesse Eisenberg) despite his brilliance is a relative nobody at Havard. But with the help of his only friend Eduardo (Andrew Garfield), Mark creates a new online social network - The Facebook. A network that becomes all the rage on college campuses and beyond. But you don’t create something that will change the world without making an enemy or two. Soon Mark is embroiled in multiple million-dollar lawsuits. One from Tyler and Cameron Winklevoss (Armie Hammer and Armie Hammer’s head) and their partner Divya Narendra (Max Minghella) who claim Mark stole their idea. And the other most damaging lawsuit is from his only friend.

When The Social Network hit theaters in 2010 it was easily one of the best movies of the year. Not my personal favorite of the year but certainly high up the list. In 11 years since its release, it remains a far and away more important and infinitely better film than that year’s Best Picture Oscar-winner The King’s Speech. Actually, every other movie nominated that year was better than that hacky piece of nonsense. The Social Network remains an important film because unlike other social platforms that have disappeared or faded out of favor - Facebook is still with us, and it’s a hot-button topic.

If I have a criticism of The Social Network today is that it's a story that isn’t nearly complete. It ends on the note that despite his brilliance and billions in wealth, Mark Zuckerberg is still like the rest of us - desperately seeking human connection. The how and why the platform became is an interesting story and it was an important one to tell in 2010. But in 2021, the important story now is what Facebook has become. It’s moved beyond being another place for well-to-dos to humblebrag or for people to post a terrifying number of pictures of their children. It’s become something far more frightening and infinitely more dangerous. If Fincher and writer Aaron Sorkin were so inclined, they could make an entire franchise out of Zuckerberg’s “Meta” monster of social networks. 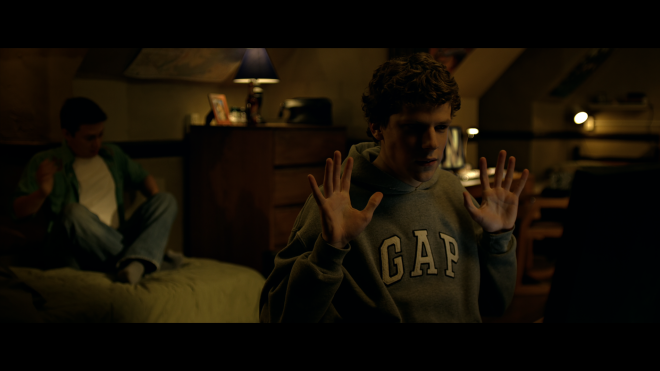 Vital Disc Stats: The 4K Ultra HD Blu-ray
Sony Pictures Home Entertainment brings David Fincher’s The Social Network to Ultra HD Blu-ray as a three-disc 4K UHD + Blu-ray + Digital Copy set. The Digital Copy can be redeemed via sonypictures.com or Movies Anywhere. The BD66 disc sits comfortably opposite two Region Free, BD50 discs inside a black, three-disc eco-elite vortex case with a glossy slipcover. The two standard Blu-ray discs are identical to the 2011 discs and have not been upgraded with the new Atmos audio mix. The 4K disc loads to an animated main menu with traditional navigation options. 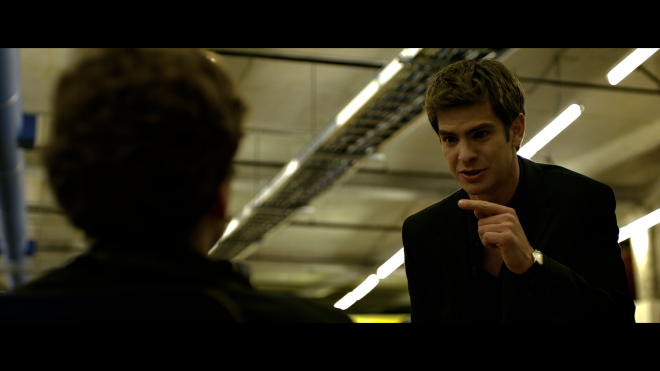 Shot digitally and finished on a 2K Digital Intermediate - The Social Network arrives with an upscaled 2160p Dolby Vision (and HDR10) transfer that offers some improvements over the 2011 Blu-ray. However, with the source limitations and the dark cinematography, this one doesn’t quite offer up as notable an A/B difference as the other films in the Columbia Classics Vol 2 collection.

That isn’t to say that this Ultra HD transfer is unworthy of attention or praise. Details remain strong and clear. There’s some extra refinement in fine facial features and clothing textures. The opening credits with Mark traveling Harvard’s campus gave a little extra clarity in building details, bricks, leaves in the trees, and the students scurrying around campus. After the fallout of Facemash and Mark is in his class, wide shot details are cleaner. Again, not huge night and day improvements over the old disc, but enough so to check that particular box. 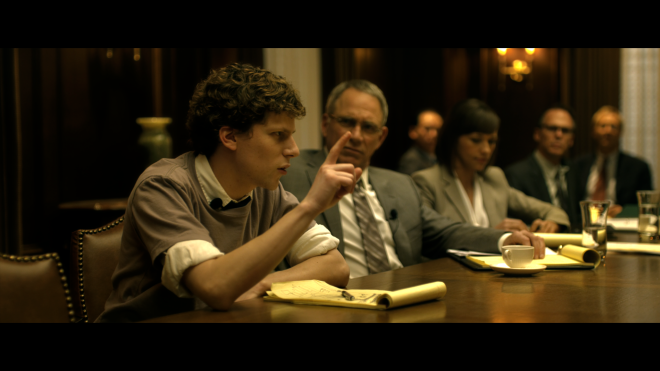 Dolby Vision HDR is the main highlight for this particular release. Given cinematographer Jeff Cronenweth’s stylized photography, the enhanced color spectrum, black levels, and whites HDR is where this disc shines. The film has a pronounced deep black with an amber yellow/brown color tone. My issue with the old 2011 disc was how flat it could look. With the cleaner details and the much improved black levels, image depth is greatly enhanced. Blacks achieve that deep inky consistency we want to see and the shadows have a more subtle gradience than the Blu-ray. Of primaries, yellow shades are dominant throughout the film and the various shades have a nice pop. Skin tones also have a much more natural and healthy appearance. Blues and reds only get a few moments to flourish but when they do they pop nicely.

The biggest improvement The Social Network has to offer on 4K Ultra HD is with this new Atmos mix. The feeling of space and atmosphere is impressive. From the opening moments in the bar to the thumping house music of the clubs to the stifling claustrophobia of the deposition rooms, each location offers a unique auditory experience. Height channels don’t offer up a lot of pinpoint object placement effects but they’re well utilized for echo or crowd sounds to fill the soundscape. Surround channels are subtly active but the mix is never overly silent or too front/center.

The big star of this mix is the excellent Trent Reznor Atticus Ross score. How it’s matrixed throughout the mix is just fantastic. The pulsing bass tones kick some nice LFE. Mark’s programming sequence for Facemash is an awesome blend of voice-over, clacking keyboards, and music. There aren’t any heavy action sequences or anything to make this mix overly showy but in terms of crafting an immersive experience, it’s pretty damn good. 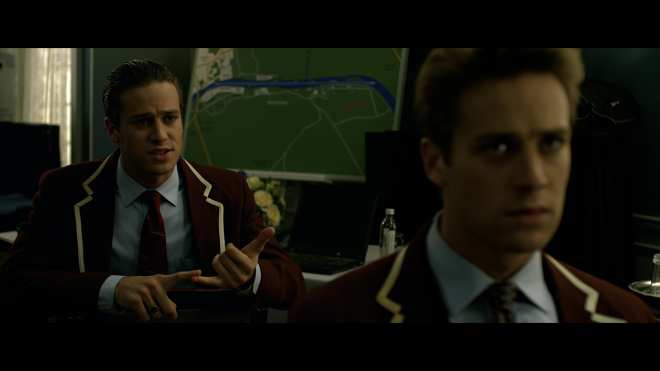 Where the road meets the rubber in bonus features - there’s nothing new here. The 4K disc offers up a trio of trailers, but the excellent Audio Commentaries and all of the making of features are found on the two 1080p Blu-ray discs. 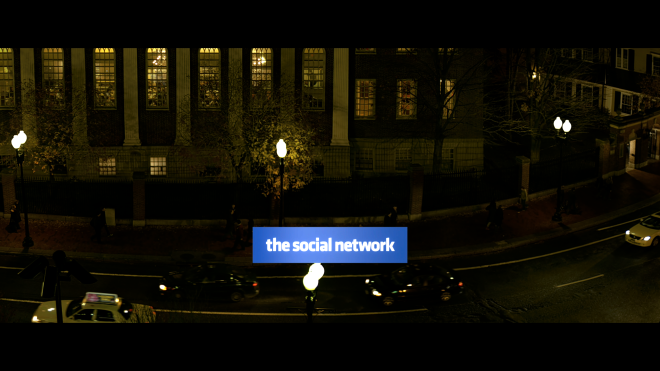 The way Sony has gone about assembling these Columbia Classics 4K Ultra HD Blu-ray collections is by gathering three genuine archival classics with three fan-favorites that were voted on. The Social Network can be argued as a fan-favorite modern classic. A film of an era about an era before the world’s most famous social network became infamous. Now on 4K Ultra HD Blu-ray, The Social Network reenters the cultural zeitgeist at a turbulent time for the network. The transfer may not be the most spectacular but it offers some welcome improvements thanks to Dolby Vision HDR while the Atmos mix gives fans the biggest reason to upgrade. Highly Recommended.