Ang Lee and Emma Thompson join creative forces for one of the best Jane Austen adaptations ever committed to film - Sense and Sensibility. Written by and starring Thompson, Kate Winslet, Hugh Grant, and Alan Rickman, this film justly earned its Best Adapted Screenplay Oscar even though it was shut out in every other category it was nominated. This delightful drama/comedy/romance comes home to 4K Ultra HD Blu-ray as part of Sony’s Columbia Classics Vol 2 collection with a stunning native 4K HDR10 transfer, an effective Atmos audio mix, and a fine assortment of bonus features. Highly Recommended.

When the head of the household passes away, Mr. Dashwood (Tom Wilkinson in a very brief role) can only leave the bulk of his inheritance to his first-born son leaving a pittance for his second wife and three daughters to live on. Cast out of their home, Elinor (Emma Thompson), Marianne (Kate Winslet), Margaret (Emilie Francois), and their mother (Gemma Jones) are forced to live on the generosity of their cousins endangering the three girls’ chances of marrying well. As the women adjust to their new lives, they’ll experience all of the trials and tribulations of genuine love, betrayal, loss, and absolute happiness.

I was all of thirteen years old when my mom more or less dragged me to see Sense and Sensibility in theaters. I have no idea why my dad didn’t go on a date night or my older sister or any of my aunts weren't available to go. But there I was next to my mom with a bag of popcorn and a box of Milk Duds expecting Sense and Sensibility to be a boring slog. But after several theatrical outings to Masters of the Universe and Superman IV as a child - it could be argued I probably owed her one. Regardless of the circumstances that got me into that theater, I found myself enjoying this film. As a red-blooded teenage male, I couldn’t relate to any of the characters, but the circumstances of the plot, the excellent writing, and the wonderful performances won me over.

And in the following years, I’ve remained a fan. As Ang Lee’s first English language film, he shows that steady hand behind the camera of a director confident in the screenplay. He's not adding "style" to make up for substance. It’s not full of wild camera flourishes, it’s even-handed and designed to capture the emotion of each moment letting his terrific cast do their best work. Sense and Sensibility and Pride and Prejudice are the only two Austen novels I enjoyed and they’ve both earned impressive film and television adaptations. But Sense and Sensibility remains my favorite film. Emma Thompson did a hell of a job capturing the essence of the novel and distilling it down into a manageable theatrical runtime. She dutifully deserved that Oscar making her the first person to win Academy Awards in Acting and Writing (although not in the same year). 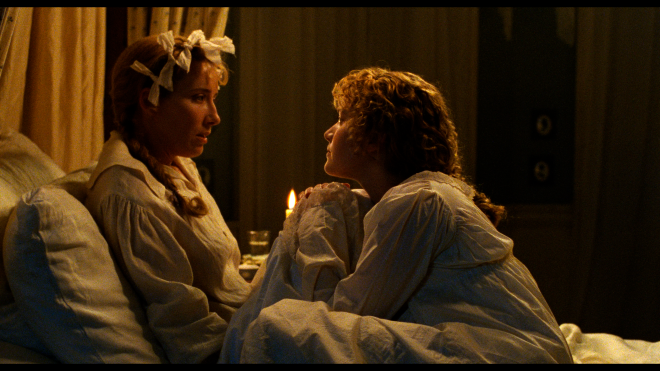 The rest of the cast is lovely in their respective roles. Hugh Grant may have still been in his floppy-haired era, but he’s an affable Edward Ferraras. Kate Winslet began her awards streak with her first nomination before becoming a household name two years later with Titanic. Alan Rickman deserves a shoutout for his wounded portrayal of the lovelorn Colonel Brandon. Prior to this film I only knew him from Die Hard, Robin Hood Prince of Thieves, and Quigley Down Under. I wasn’t used to seeing him as anything but a villain. He may not have a huge role, but Hugh Laurie is a hoot as the perpetually annoyed Mr. Palmer.

As big of a fan as I am of Sense and Sensibility, I know it’s not some folk’s best brand - for an alternate take on the film, read our 2015 review of the Twilight Time Blu-ray

Vital Disc Stats: The 4K Ultra HD Blu-ray
Sony Pictures Home Entertainment brings Ang Lee’s Sense and Sensibility to Ultra HD Blu-ray as a two-disc combo pack within the Columbia Classics Volume 2 collection. Along with the other films in the set, there is a Digital Copy code, which can be redeemed via sonypictures.com and Movies Anywhere. The triple-layered UHD100 disc sits comfortably opposite a Region Free, BD50 disc inside a black, eco-elite vortex case with a glossy slipcover. 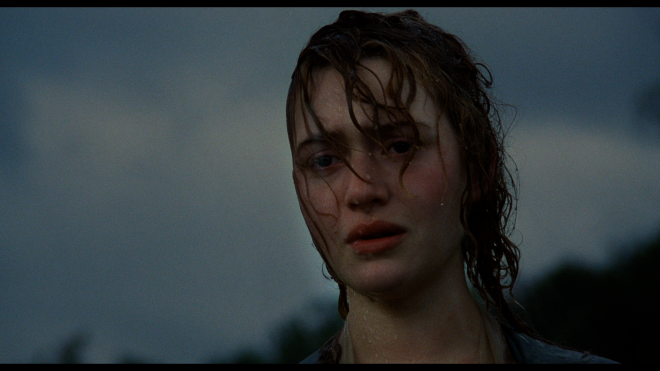 It seems forever ago when Twilight Time was a premier label for Blu-ray releases - but back in 2015 they managed the rights from Sony for a lovely release of Sense and Sensibility. It wasn’t picture-perfect, it had some odd compression artifacts, but it was very good. Now fully upgraded to a native 4K 2160p HDR10 1.85:1 transfer, this film earns the stunning release it always deserved. Detail levels, colors, grain management, black levels - all gain substantial improvements. The only “rough” patch of note is around the opening credits where the image can appear a little crunchy because of the optical processing. Once those credits are over it’s smooth sailing to the final fadeout.

As a costumed period piece, you expect some incredible details and this film delivers. Facial features, makeup, patterns, and individual stitches in clothing are all apparent. Small details like the fine print in books or Margaret’s atlas are much more clearly defined. When the Dashwoods arrive at their new cottage, you can fully appreciate the weathered condition better than in past home video releases. Again the clothing and production design are the eye-catchers - this film more than earned its Costume Design Oscar nomination. 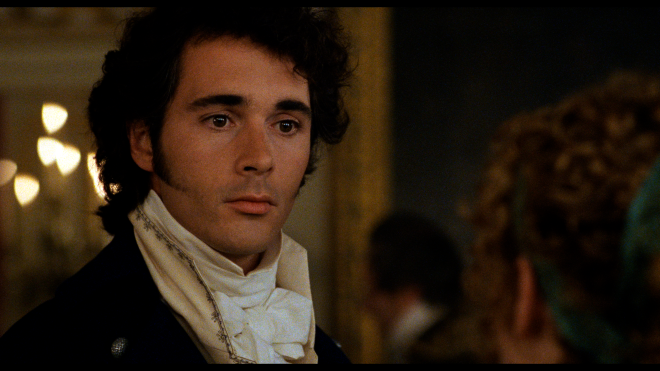 HDR10 has been nicely applied allowing for some lovely vivid primary pop. Blue is a particularly strong color throughout the film. Reds also get their time in the sun with Colonel Brandon’s dress uniform and other highlights. A number of scenes are lit by candle and firelight giving yellows and oranges their moments. Black levels are also much better handled with this release. Film grain is better resolved and less noisy looking in key night scenes like when Marianne keeps summoning the housekeeper to deliver late-night notes to Willoughby. There are less severe fluctuations with the film grain than with the old Twilight Time release. Free of any age-related issues or damage or speckling of any kind, this is a genuinely beautiful transfer. 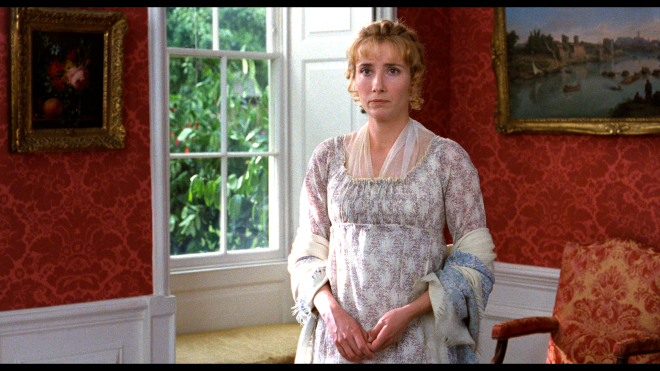 This release also comes with a pair of audio mixes to work with - the same DTS-HD MA 5.1 track, that I found to be a bit on the limp side and a new Atmos track that is surprisingly immersive. This isn’t a loud and active film so the extra channels are mostly used to set the scene. Old houses with creaky floorboards, people opening and closing doors, the gentle swish of the fabric in large dresses all carry more impact throughout the channels as do gentle breezes and gusts of wind through leaves and grasses. 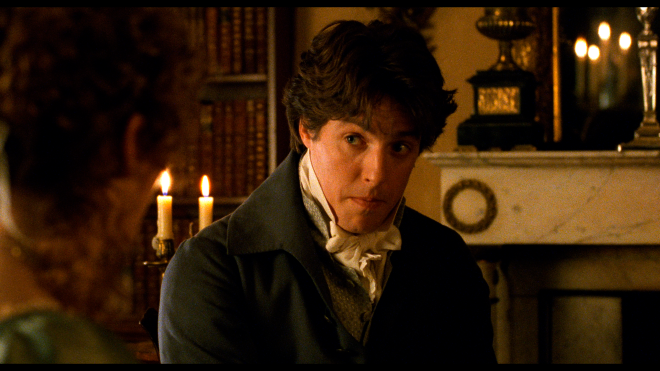 When Ellinore and Marianne go to the ball the mix really picks up offering near-constant surround activity with the height channels capturing the expansive mumbling of a packed crowd of people. Most of the time height channels really are mostly used for extra atmosphere and space to a given location but rainstorms and thunder rumbles get some key overhead placement. The fantastic score by Patrick Doyle fills out the mix nicely without feeling overworked or shoehorned in to add sound to a relatively quiet movie. Again, this isn’t an action movie with wall-to-wall action, but this Atmos track is a notable improvement over the relatively flat DTS-HD MA 5.1 track. 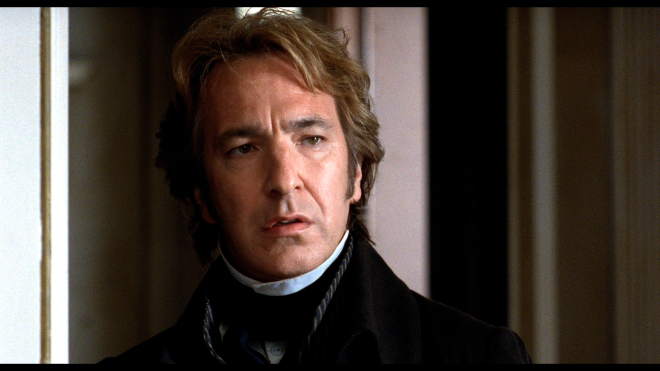 In a bit of a switcheroo from the rest of the Columbia Classics Vol 2 titles, none of the bonus features appear on the actual 4K disc. Which again, there are two audio commentaries that require you to use the 1080p Blu-ray instead of sticking with the superior viewing experience. Now two bonus features - the Patrick Doyle Isolated Score track and Emma Thompson’s Golden Globes acceptance speech found on the Twilight Time disc were not carried over for this release. The awards speech as nice as it is isn’t that big of a loss, but it’s a shame Sony couldn’t bring over that Isolated Score for either the 4K or 1080p disc. The only new bonus feature is the 25th Anniversary virtual reunion which is nice to see. Everything else dates back to the special edition DVD. 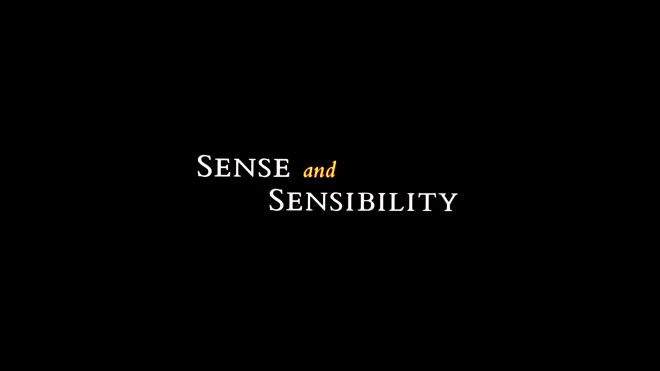 There have been a lot of Jane Austen adaptations over the years. It feels like every five years or so we get another cycle of films or television miniseries to capture the attention of a new generation. When I was a teenager Clueless and Sense and Sensibility were the gold standards - for theatrical films anyway. Emma Thompson crafted a terrific adaptation with her screenplay and Ang Lee did a masterful job behind the camera. The film is charming, heart-wrenching, and funny - often all in the same scene. Now on 4K Ultra HD Blu-ray from Sony - it’s a fitting addition to the Columbia Classics Vol 2 set with a gorgeous transfer and an impressive Atmos audio mix. It may not be “the one to get the set for, but it’s worthy of being a part of the set. Highly Recommended