Over forty years later, Martin Scorsese's crime drama Taxi Driver remains a brilliant, masterfully told tale about a disillusioned man's downward spiral into alarmingly disturbed behavior, featuring one of Robert De Niro's most memorable, cherished and iconic performances. The classic crime drama drives the mean streets of 4K Ultra HD with a stunning Dolby Vision HDR presentation, armed with an excellent DTS-HD track and the same set of bonuses as before. Nevertheless, this UHD edition of a celebrated, classic piece of cinema history is Highly Recommended.

With much already been discussed and analyzed about Martin Scorsese's crime drama Taxi Driver, there is little else that could possibly be said, especially compared to David Krauss's excellent review. So, I'll simply share my reasons for absolutely loving Scorsese's masterful tale about a young disillusioned man's downward spiral into alarmingly disturbed behavior. To this day, there remains some debate over the film's epilogue, the entire sequence of Travis Bickle (Robert De Niro) being released from the hospital and working as a cabby again. If taken as reality, the denouement possibly signifies his descent into psychotic vigilante starting all over again since the root of his psychosis and alienation was never addressed. However, the sequence also works as a final, spontaneous comatic reverie of a deranged dying man imagining himself heralded as a hero by the media and suddenly desired by the woman who spurned him. In either case, it's part of the film's brilliance and Scorsese's mastery leaving this ending for viewers to decide.

Another favorite and very telling moment is at around the midpoint of Paul Schrader's excellent script. While Travis talks to Betsy (Cybill Shepherd) at a payphone inside an undisclosed building, Travis seems to control much of the right side of the screen, mostly in profile but clearly looking agitated. The amount of empty space to the left, which looms behind Travis, has a distinctly palpable feel to it, and as Betsy continues to reject him, it also starts feeling overwhelming and somewhat oppressive. Then, Scorsese brilliantly pans the camera to the right and away from witnessing our central protagonist humiliating himself. The scene almost grows unbearable to watch, as if the empty hallway is a preferred view. For me, the simple camerawork also implies further insight into Travis's deteriorating mental state and is arguably the moment of his perilous existential crisis with the open door beckoning and welcoming him into the pitch-black, neglected and morally bankrupt streets, which then seals his isolated fate.

For a more in-depth take on the film, you can read David Krauss's excellent review of the 40th Anniversary Blu-ray Edition HERE. 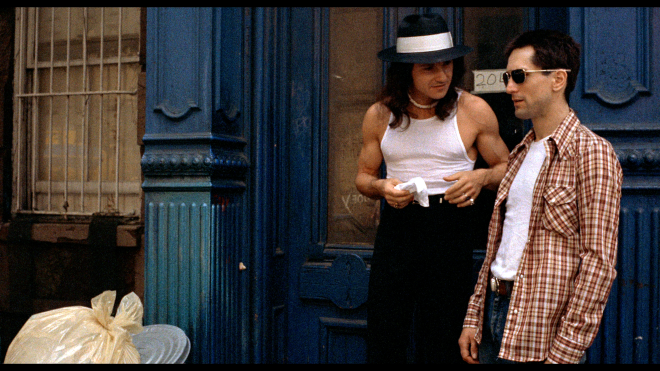 Vital Disc Stats: The Ultra HD Blu-ray
Sony Pictures Home Entertainment brings Martin Scorsese's Taxi Driver to Ultra HD Blu-ray as a two-disc combo pack with a flyer for a Digital Copy, which can be redeemed via sonypictures.com and Movies Anywhere. When redeeming said code, users are granted access to the 4K UHD version in Dolby Vision HDR with Dolby Atmos audio. The triple-layered UHD100 disc sits comfortably opposite a Region Free, BD50 disc inside a black, eco-elite vortex case with a glossy slipcover. At startup, the disc goes straight to a static main screen with the usual options along the bottom while music plays in the background. 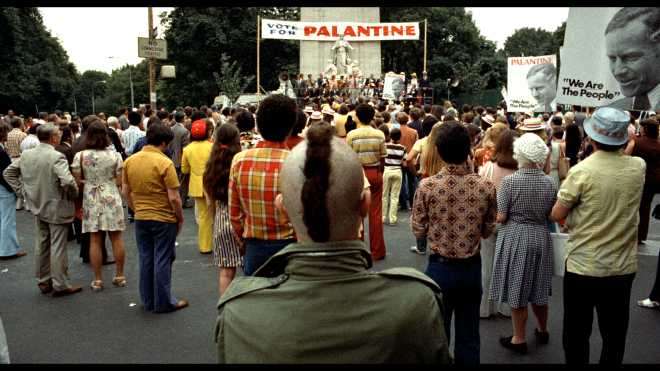 The classic crime drama drives through the mean streets of Ultra HD with a sensationally beautiful HEVC H.265 encode while still maintaining the film's grimy, bleak aesthetic. Reportedly struck from a brand new remaster of the original 35mm camera negatives, the native 4K transfer comes with a welcomed uptick in overall definition and clarity, which is immediately apparent in the opening moments with Travis applying for the taxi driver position.

The smallest imperfections in the buildings and the streets of New York City are distinct, every strand of hair is sharp, and the lettering in the political signs, billboards and handwritten notes are consistently legible. A spot-on contrast balance furnishing a brighter picture and clean, vivid whites throughout allows for stunning visibility in the far distance of the daylight sequences. Specular highlights further make the 4K video pop, as the neon lights intensely glow while revealing the finer details, the watery streets and the individual water droplets glisten and the metallic surfaces have a realistic sheen. A few sequences understandably fall short of its best, sharpest moments and are poorly resolved, mostly notably the climactic shootout. But all in all, the transfer offers an impressive upgrade over its HD SDR predecessors, awash in a fine layer of grain that's mostly consistent yet furnishes the results with a lovely film-like quality. 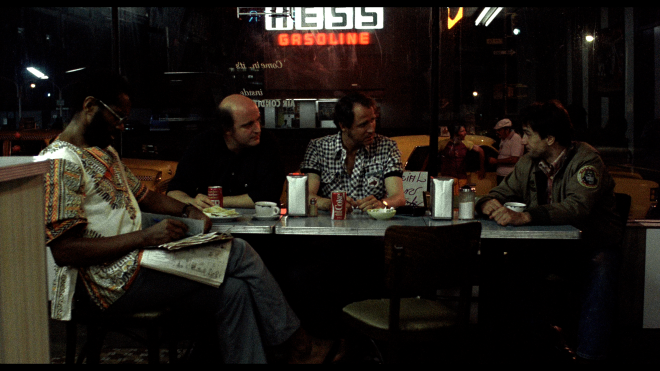 The strongest aspect of the Dolby Vision HDR presentation is, hands down, the improved wider color gamut and the brightness levels, providing the 1.85:1 image with eye-catching energy and glitzy swagger that nonetheless feels severely somber and dispirited. The streets at night are engulfed in bleak, velvety blacks that penetrate deep into the screen, and the silky midnight shadows retain incredible detailing within the darkest corners, with the aforementioned shootout being the one exception where the picture, unfortunately, falls flat. Nevertheless, Michael Chapman's cinematography benefits most from the richly-saturated primaries, particularly the rose-red of Betsy's outfits, the crimson of Palantine's campaign posters and Iris's room, and the deep ruby scarlet of the blood. The rest of the palette also enjoys a notable boost in the secondary hues with the truer canary yellows of the cab standing out while Travis always seems immersed in a varied, spirited assortment of greens and teals.

Overall, the film is stunning, mesmerizing and has never looked better on any home video format as it does on UHD. (Dolby Vision HDR Video Rating: 86/100) 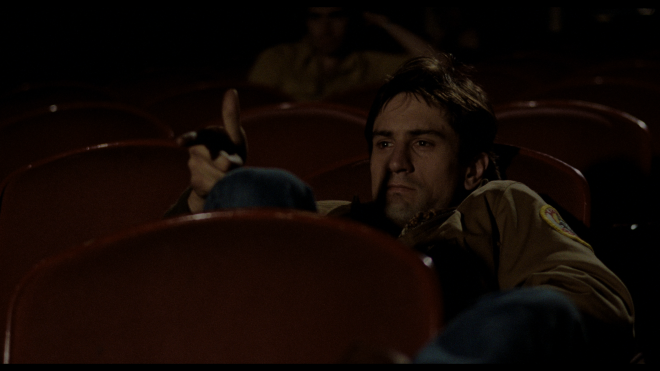 For this Ultra HD edition, the classic crime drama drives into home theaters with an identical DTS-HD Master Audio 5.1 soundtrack as the 40th Anniversary Blu-ray. As much as an object-based option would have been greatly appreciated, this surround soundtrack is nonetheless an excellent lossless mix, especially when applying the receiver's Dolby Surround or DTS: Neural:X up-mixing functionality. This outfits the front-heavy design with a broader and more spacious presence, as various atmospherics convincingly pan across the entire soundstage while the score subtly and faintly bleeds into the sides and top heights without seeming forced or artificial. Also, the mid-range exhibits superb distinction and clarity throughout while vocals are precise and crystal clear, and an appropriately hearty low-end supplies some appreciable weight to the visuals.

For a different take on the audio quality, you can read our review of the Blu-ray HERE. (Audio Rating: 82/100) 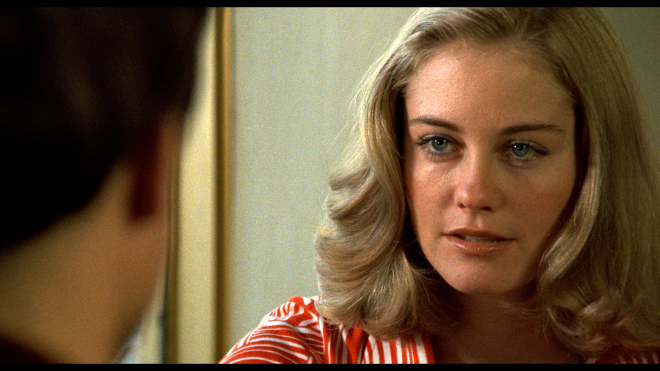 As with the audio, Sony has ported over the same set of bonuses as the previous anniversary release, but it has been divided between the UHD and the accompanying Blu-ray disc. 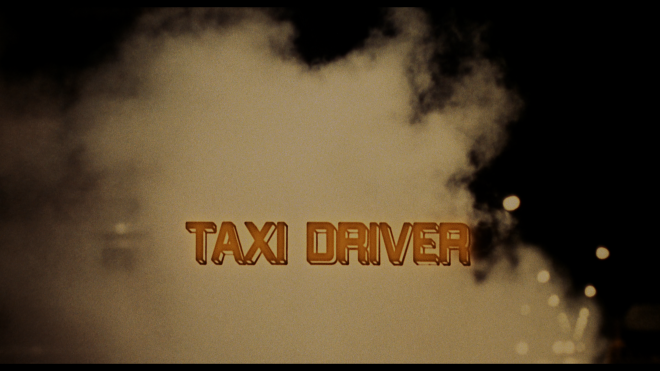 "Taxi Driver remains one of the best films of the 1970s. Nominated for four Academy Awards, including Best Picture, Best Actor, Best Supporting Actress, and Best Original Score (Scorsese, in the first of many Oscar snubs, was inexplicably overlooked), this unsettling yet marvelously mounted and performed motion picture still provokes the same strong reactions as it did upon its initial release [over] four decades ago. Call him a psycho, call him a devil-turned-savior, call him a paranoid vigilante, but any way you look at him, Travis Bickle is one memorable character, and De Niro makes him unforgettable."

The classic crime drama drives through the mean streets of 4K Ultra HD with a sensationally beautiful Dolby Vision HDR presentation, sporting a notable upgrade over its previous HD SDR predecessors, but armed with the same DTS-HD MA soundtrack as the last anniversary Blu-ray. An identical set of bonuses are also ported over, but it's an amazing collection of supplemental material worth sifting through, making this UHD disc a highly recommended addition.