The army calls for the best of the best. Instead, they get Bill Murray, Harold Ramis, and John Candy. Stripes was one of many military-skewering comedies of the 1970s. Murray’s charm and antics with Ramis’ stiff straight-man personality and Ivan Rightman’s direction delivered a genuine comedy classic. Now as a part of Sony’s Columbia Classics 4K Ultra HD Blu-ray Collection Vol 2 - the film earns a gorgeous native 4K HDR10 transfer with multiple audio tracks to choose from along with a welcome assortment of new and legacy bonus features. Highly Recommended

Best friends John Winger (Bill Murray) and Russell Ziskey (Harold Ramis) live dead-end jobs with no prospects. After John loses his job, girlfriend, car, apartment, and pizza all in the same day - he convinces Russell the best thing for them to do is join the army. Only army life isn’t exactly as advertised on television. Immediately John pisses off Sargent Hulka (Warren Oates). After hundreds of pushups, days upon days of KP, and miles of rain-soaked marches - somehow their platoon graduates basic training and is put in command of the Army’s newest and most lethal urban assault vehicle - an armored campervan.

In the post-Vietnam post-Nixon era, Hollywood was either churning out the tense and terrifying conspiracy thriller movies like The Parallax View or they were pumping out military spoofs the likes of M*A*S*H. Obviously, Ivan Reitman’s Stripes falls into the latter category. Without a genuine war to fight, the idea of joining the army was viewed as a dodge or hustle to get out of trouble and cash an easy paycheck. In the late 90s when I was closing out my high school career, I knew so many guys who joined ROTC programs or went into the service simply to get the G.I. Bill and pay for college without a loan. The military was something that could be joked about. That obviously changed about 20 years ago. You can’t really make miliary-themed comedies like Stripes anymore. Similarly, you can’t really make terrorist action/comedies like True Lies anymore. 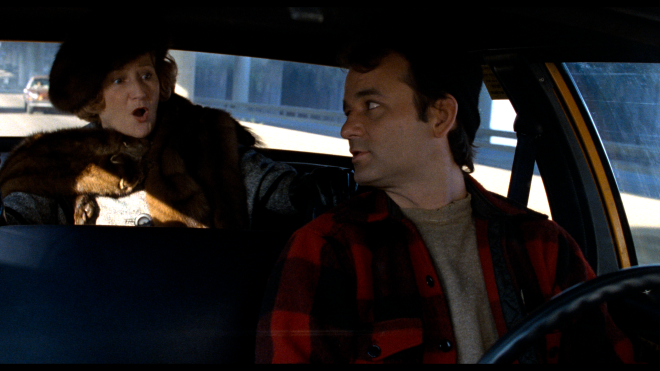 In the pantheon of military comedies, Stripes may not lead the pack, but it’s a damn funny entry nonetheless. What I like about this one, in particular, is that it’s not out to make the military the butt of a joke but instead has fun with the idea that a slacker like Winger could survive the service. The interplay with Murray and Warren Oates’ Hulka is gold. Oates plays it straight as can be letting Murray’s brand of subtle humor shine as a result. Ramis also shines as the affable Ziskey. I love that he’s the “smart” one of the pair but so often gets pulled into a bad situation because he’s also spineless against Winger’s prodding. After that, we have to give a mention to John Candy’s lovable Ox. It may be a small role, but he steals every scene.

Now, Stripes is also a prime example of how an Extended Version of a comedy just doesn’t work. Running at nearly fifteen minutes longer, there’s nothing in the Extended Version that makes this movie actually “better.” If anything the extra footage throws off the flow of the film and makes for a weaker comedy. The footage of Winger and Ziskey getting dropped into Central America may fill a sort of plot hole, but it doesn’t add to the movie. It's actually a leftover plot device when Cheech and Chong were attached. It’s not funny and goes on for so long. By the time things get back to the main movie, you’ve forgotten what’s going on. There’s a good reason this material got cut. It’s fun as a curiosity, but I never enjoy watching the Extended Version. But for those who do enjoy the longer version, kudos to Sony for including it on this 4K release. 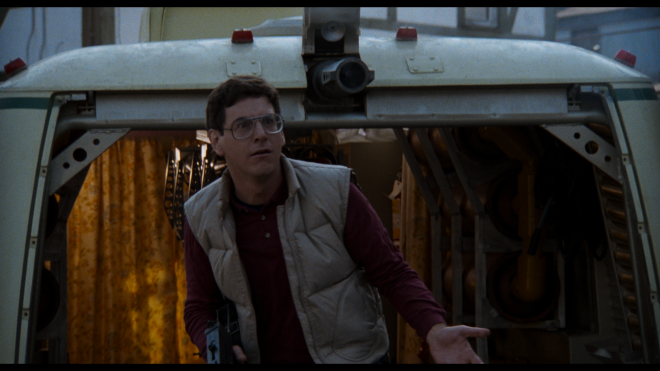 Stripes is a family favorite where I come from. I don’t remember how old I was when my parents first showed this one to me, but for how often they fast-forwarded or muted it - I was probably too young. Regardless, this is one of my very favorite comedies. I was a little surprised to see that Sony was including it with the Columbia Classics Vol. 2 set, but I’m glad to see it get the love and attention it deserves. I've seen this flick a hundred times and it always makes me laugh.

Vital Disc Stats: The 4K Ultra HD Blu-ray
Sony Pictures Home Entertainment brings Ivan Reitman’s Stripes to Ultra HD Blu-ray as a two-disc combo pack with a flyer for a Digital Copy, which can be redeemed via sonypictures.com and Movies Anywhere. The triple-layered UHD100 disc sits comfortably opposite a Region Free, BD50 disc inside a black, eco-elite vortex case with a glossy slipcover. The 1080p Blu-ray offers a newly remastered transfer of the film. At startup, the disc loads to a menu allowing you to pick which version of the film you want to watch before moving on to a static image main menu. 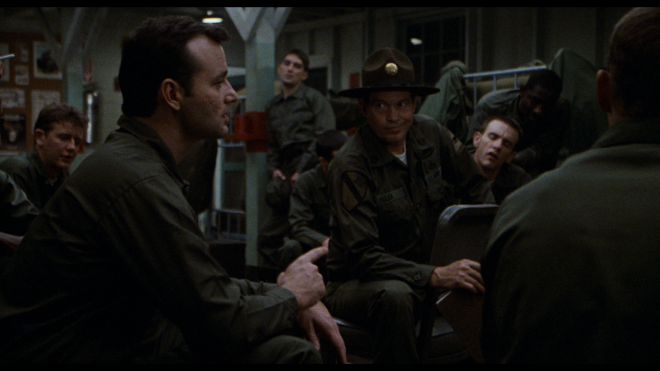 Stripes has never had a great home video history. The first Blu-ray release offered up little to no improvement over the DVD so I never bothered to upgrade. Plugging in this native 4K 2160p HDR10 transfer was like seeing the movie again for the first time! I was immediately impressed with the detail clarity and how well this transfer manages film grain. Past Blu-ray and DVD transfers really struggled with it often being left with a noisy and unsatisfying image. Film grain is retained here but is well resolved and organic without ever appearing too noisy. Image clarity lets you fully appreciate all of the small details.

HDR10 also gives this film a lovely boost in the colors, black levels, and contrast. Colors appear well saturated with nice deep blues, yellows, and reds. Army uniforms are appropriately olive drab. Black levels are better than I’ve ever seen them. Past releases suffered from some heavy crush issues and that’s not an issue. The heavy black night scene when Winger tries to go AWOL or when the group hits the strip club, blacks are nice and inky with great shadow separation and image depth. 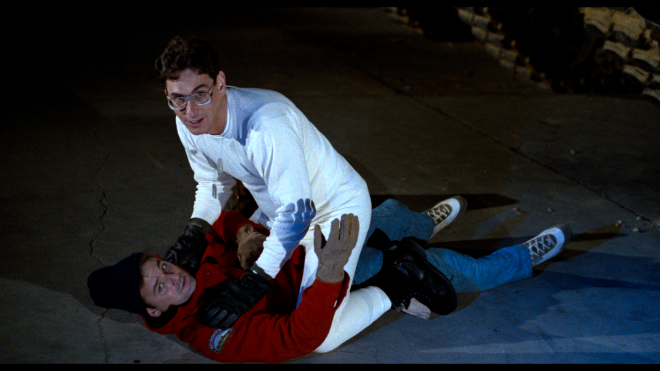 I honestly wasn’t expecting very much from this. When this set was announced of the six my only quizzical reaction was for Stripes. But this is far and away better than anything we’ve had on disc before. This actually gives me hope that if Sony wanted to revisit Ghostbusters on 4K, the results might be a little more favorable! 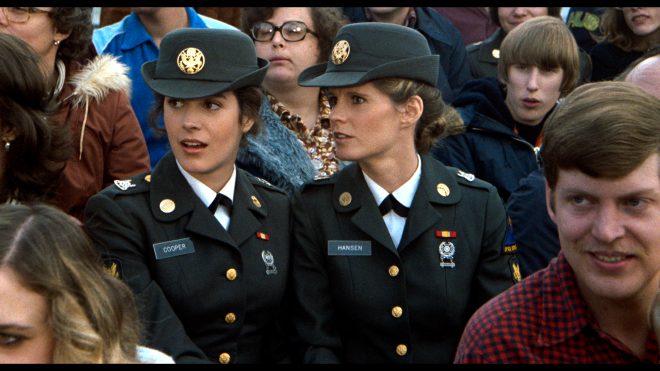 The platoon of Stripes invades your sound system with a trio of audio options - a new Dolby Atmos audio mix, a DTS-HD MA 5.1 mix, and a DTS-HD MA 2.0 Mono track. Normally in this case I would be more of a traditionalist and roll the 2.0 Mono - but I gotta hand it to Sony for crafting one heck of a great Atmos mix. I wasn’t expecting to enjoy it that much but they really did find some unique ways to spread out the soundscape in an organic way that doesn’t sound forced or artificial. From the opening scenes in New York to when the boys first get to basic training to their invasion of East Germany, there’s a lot to absorb.

For the quietest conversational moments, the mix is pretty front/center focused. But in large group scenes or dynamic locations, it really opens up with some terrific surround activity. The mortar course where Hulka gets blown up is a great example of where things start front/center, open up to surround, and then slam in a delightful overhead effect of the round flying over and down into the screen. Then immediately following that is the mud wrestling sequence which has constant surround and overhead activity and amazing LFE thanks to the bass track from The Spinners' classic funk hit “Rubberband Man!” 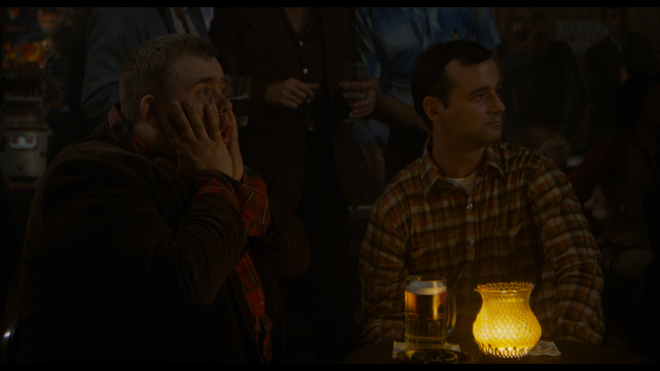 The final act picks up the full Atmos effects thanks to the big action sequences. Throughout Elmer Bernstein’s terrific score radiates throughout the mix - I wish they had included an isolated score track here, that’d been great! Levels throughout are fantastic with clean and clear dialog and no need to make adjustments once you have it at your comfortable listening levels.

The DTS-HD MA 5.1 mix is the same as before, and really I never took to that track. The DTS-HD MA 2.0 Mono is nice and works well for this movie. If you don’t have Atmos the 2.0 Mono mix is the better way to go. If you have Atmos, that is the main event. 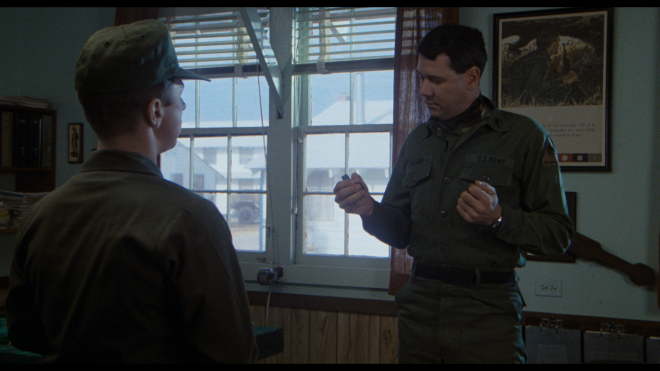 One of the nice things with this Columbia Classics Vol 2 set is Sony working to cultivate some new bonus features for their releases. Stripes is no different. We get a welcome mix of new and legacy bonus features. While it’s nice to have bonus features on both discs, it’s incredibly frustrating to me that the Audio Commentary track is only on the 1080p Blu-ray disc. 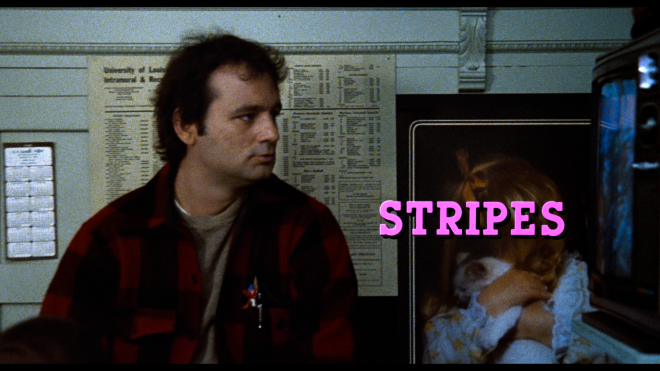 Stripes is a true comedy classic. What once could have been another Cheech & Chong movie grew into something bigger and better allowing Ivan Reitman, Bill Murray, and Harold Ramis to really show what they could do for a big screen audience. 40 Years later this movie still packs the laughs. After a long sad history of relatively bad home video releases, Stripes joins the ranks of 4K Ultra HD Blu-ray with excellent results. The native 4K HDR10 transfer leaves the film looking better than ever and the new Atmos mix packs a few punches of its own. Toss in a nice mix of new and legacy bonus features and you have a worthy entry in the Columbia Classics Vol 2 set from Sony - Highly Recommended.