Otto Preminger's courtroom drama Anatomy of a Murder remains a solid, terrifically engaging trial movie that gives audiences a matter-of-fact glimpse into the unromanticized nuts-and-bolts of a criminal trial, garnering the impressive status as one of the most realistic trial movies ever made. The courtroom classic is scrutinized in the hallowed halls of Ultra HD and charged with a spectacularly beautiful 4K video, a satisfying Dolby Atmos track and a few of the same bonuses from the Criterion Collection. Overall, the UHD disc is a Highly Recommended addition.

There is a simple but great reason for Otto Preminger's Anatomy of a Murder being considered one of the best trial films ever made, not just by movie-lovers but even in the eyes of legal experts. Based on the 1958 novel of the same name by Robert Traver, pen name of Michigan Supreme Court Justice John D. Voelker, the courtroom drama is arguably the closest audiences will come to a realistic criminal trial presented on screen. Granted, Wendell Mayes's script does come with a few fictionalized flourishes and takes some creative license so as to slightly raise the stakes and build the dramatic tension, a warranted necessity for keeping viewers invested for the entirety of its 160-minute runtime. But where other movies severely hyperbolize that tension for a histrionic conclusion, Preminger's film impressively details the mechanics behind mounting a defense along with the amount of research and planning involved in winning a case.

Loosely inspired by the real-life murder case of a tavern owner by an Army Lieutenant, the story follows a former district attorney in a small Michigan town being essentially cajoled to take the case by the accused Lt. Frederick Manion (Ben Gazzara) and his wife Laura (Lee Remick). Part of the production's lasting beauty is the performances, starting with the couple feeding our suspicions, like the jealous Gazzara hiding violent tendencies and Remick's femme-fatale-like personality causing unintentional complications. Above the rest, of course, is the always phenomenal James Stewart as the jazz-loving lawyer whose quaint, casual and folksy manner hides a keenly discerning, highly intelligent and astutely witty counselor. The cross-examination scenes where he irritates and thwarts the prosecution's (George C. Scott and Brooks West) attempts to block the temporary insanity plea are the film's most memorable highlights. 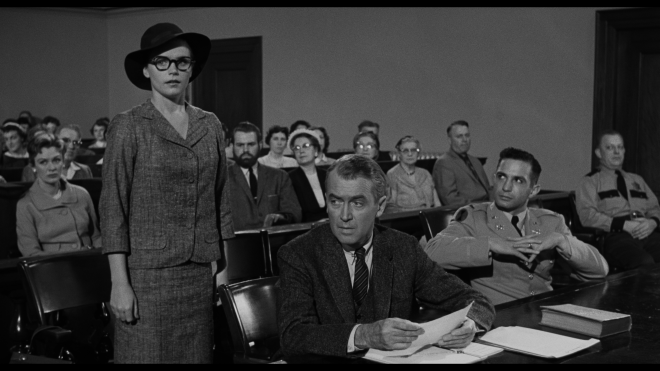 For a more in-depth take on the movie, you can read David Krauss's excellent review of the 2012 Criterion Collection Blu-ray HERE.

Sony Pictures Home Entertainment brings Otto Preminger's Anatomy of a Murder to Ultra HD Blu-ray as a two-disc combo pack with a flyer for a Digital Copy, which can be redeemed via sonypictures.com and Movies Anywhere. When redeeming said code, users are granted access to the 4K UHD version in Dolby Vision HDR with Dolby Atmos audio. The triple-layered UHD100 disc sits comfortably opposite a Region Free, BD50 disc inside a black, eco-elite vortex case with a glossy slipcover. At startup, the disc goes straight to a static main screen with the usual options along the bottom while music plays in the background.

The courtroom classic is scrutinized on Ultra HD and charged with a spectacularly beautiful HEVC H.265 encode, looking impressively dapper than its Criterion Collection Blu-ray counterpart. 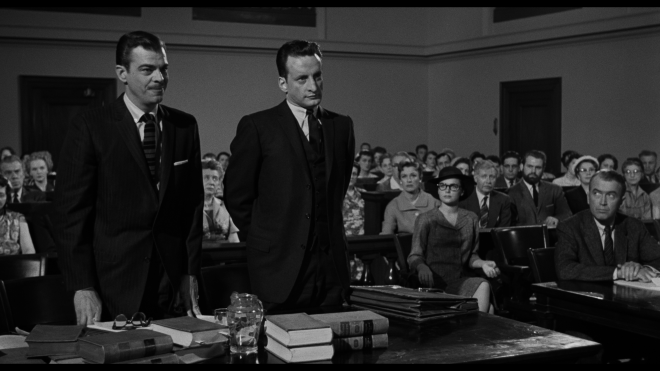 Coming from a fresh remaster of the original 35mm camera negatives, possibly the same used for its HD predecessor, the native 4K transfer shows razor-sharp detailing for a majority of the runtime. We can better make out the fabric and stitching in the various costumes, the lettering along the book spines decorating Biegler's house and the individual faces crowding the courtroom. A few spots drop ever so slightly in terms of overall resolution and quality, which are likely inherent to the OCN and easily forgiven, but by and large, the elements appear to be in pristine condition, awash with a fine layer of natural grain giving the HDR10 presentation a lovely film-like quality.

Contrast balance is spot-on, showering every scene with exceptionally snappy whites and crisp, radiant specular highlights, supplying a tight, narrow glow in the hottest areas while revealing more of the finer aspects. Likewise, accurate brightness levels provide the 1.85:1 image with rich, velvety blacks and silky midnight shadows the penetrate deep into the screen without sacrificing the sharper details within the darkest corners of the frame. (HDR10 Video Rating: 90/100) 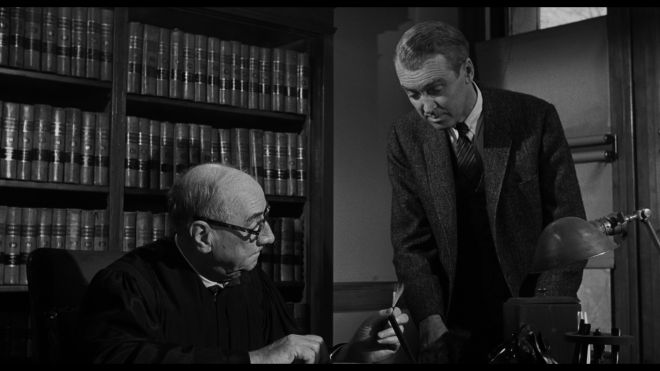 In a surprise and unexpected move, Sony slaps the defense with a highly satisfying and impressive Dolby Atmos soundtrack that immediately fills the entire soundstage with Duke Ellington's high octane score. Imaging continuously feels wide and welcoming with outstanding channel balance, providing the drama with a fantastic sense of presence and sharp definition in the mid-range. This allows for exceptional clarity and distinction in the horn section of Ellington's music as it flawlessly bleeds and rings into the sides and top heights without ever once feeling forced or artificial. The same goes for a few ambient effects occasionally moving across the screen and into the surrounds and overhead, such as some of the local wildlife singing in the distance or the clatter of the courtroom echoing all around. All the while, dialogue reproduction remains distinct and precise in the center with superb intonation in each dramatic performance. Most surprising is an ample, robust low-end that provides some of the visuals with an energetic, weighty presence, making for a great listen to a tensely powerful classic. (Dolby Atmos Audio Rating: 86/100) 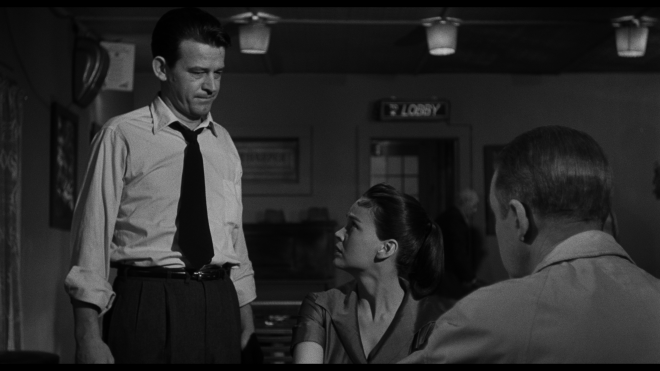 While the UHD houses only the film, the accompanying Blu-ray contains a healthy set of supplements, most of which are borrowed from the Criterion edition along with one new addition. 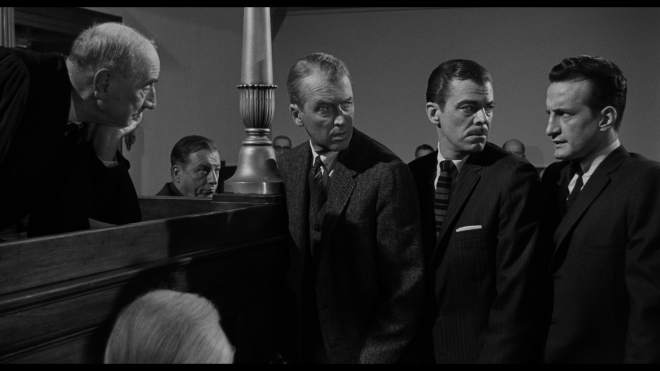 To borrow from David Krauss's excellent review of the Criterion Collection Blu-ray, Otto Preminger's Anatomy of a Murder may have lost some of its titillating sting with contemporary moviegoers. But for audiences of 1959, the courtroom drama about a scandalous homicide was a solid, fresh take detailing the less histrionic aspects of a criminal case, garnering the impressive status as one of the most realistic trial movies ever made. The courtroom classic is scrutinized on Ultra HD and charged with a spectacularly beautiful 4K HDR10 presentation and a satisfying Dolby Atmos soundtrack, providing fans with an appreciable upgrade over its Criterion Collection Blu-ray counterpart. A few of the same bonuses are ported over and joined by a new commentary track, making the UHD disc a highly recommended addition.