No matter how often I watch Sir Carol Reed's boisterously spirited Oliver!, I always seem to find myself at odds with one particular aspect of what is otherwise a stunning musical production of a splendid Charles Dicken's classic. That area of concern is some of the lively musical numbers not really harmonizing with the somber seriousness of certain situations. Memorable as they are, a few songs, honestly, fail to heighten the emotional gravity of a character's plight at the moment. Most notably is the "As Long as He Needs Me" number, and as much as I love Shani Wallis's performance as Nancy, who is truly phenomenal in the role, the character essentially justifying her abuse at the hands of Bill Sikes (Oliver Reed) doesn't really carry the sad, heart-rending weight that was presumably intended. In fact, it's difficult to even argue the entire sequence is meant to be ironic, as part of Nancy's internal struggle, because the music weirdly plays as both upbeat and glum while the camerawork is distressingly uplifting.

On the other hand, we can also understand why the music only toys with the melancholic without ever fully embracing it when taking into consideration the period in which this production was made. The 1960s were a tumultuous decade, riddled with several tragedies and a war abroad that was intensifying, so it comes as no surprise that moviegoers gravitated towards this romanticized portrait of street urchins surviving society's dark underbelly. In spite of its bleak subject matter, the tale of the brightly cheerful orphan Oliver (Mark Lester) is a heart-warming escape from the harshly cold reality of the world. When Dodger (Jack Wild) escorts the streets of 19th Century London into a rollicking rendition of "Consider Yourself," we can help but smile as we tap along. And opening Act 2 with "Who Will Buy" as the people of Bloomsbury Square brighten the screen, the air fills with a sense of hope that is genuinely infectious and inspiring, which ultimately vindicates the film and dismisses my admittedly trivial objections.

For a more in-depth and different take on the movie, you can read David Krauss's excellent review of the 2018 Blu-ray HERE.

Vital Disc Stats: The Ultra HD Blu-ray
Sony Pictures Home Entertainment brings Sir Carol Reed's Oliver! to Ultra HD Blu-ray as a two-disc combo pack with a flyer for a Digital Copy, which can be redeemed via sonypictures.com and Movies Anywhere. When redeeming said code, users are granted access to the 4K UHD version in Dolby Vision HDR with Dolby Atmos audio. The triple-layered UHD100 disc sits comfortably opposite a Region Free, BD50 disc inside a black, eco-elite vortex case with a glossy slipcover. At startup, the disc goes straight to a static main screen with the usual options along the bottom while music plays in the background. 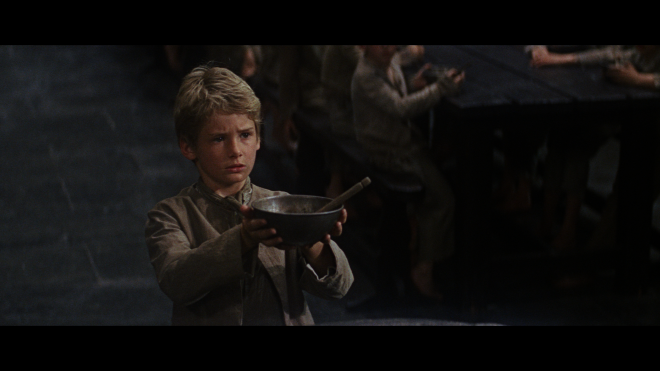 The award-winning musical picks the pockets of Ultra HD fitted with a charmingly handsome HEVC H.265 encode, which was struck from a brand new restoration and remaster of the original 35mm camera negatives. Compared to its previous two Blu-ray releases, the native 4K transfer sports a welcomed uptick in overall definition and clarity, showing slightly better detailing in the threading and stitching of the costumes. The fine lines and objects in the stage design are plain to make out, giving fans another level of appreciation for the amount of work that went into every elaborate scene and composition. A few moments of softness and very slight poor resolution are sprinkled here and there but are to be expected and forgiven. The real win ultimately comes from the overall consistency and fidelity of the picture, awash in a fine layer of natural grain, which is stable and furnishes the 2.35:1 image with a lovely, film-like quality.

For the first half of the film, contrast is somewhat subdued and restrained to create a thematically dour and gloomy atmosphere that complements Oliver's situation, which is also in line with the creative intentions of cinematographer Oswald Morris. After the intermission, the second half enjoys a more vivid, dynamic contrast balance as Oliver's prospects improve, lavishing the buildings of Bloomsbury Square in intensely bright and immaculate whites while specular highlights supply a crisp radiance to the edges of clouds, a tight revealing glow in the damp roads and a realistic sheen along metallic surfaces. Meanwhile, black levels are inky rich with velvety midnight shadows from start to finish without sacrificing the finer aspects in the darkest, murkiest corners, adding an attractive cinematic appeal to the musical numbers.

Similar to the contrast, the bleak stylized photography in the first half of Act 1 comes with a rather limited assortment of colors, but when Oliver arrives in London, the selection slightly expands with a bit of vibrancy and pep during the "Consider Yourself" performance. However, the HDR10 presentation suddenly comes alive and leaps into high spirits at the start of Act 2 with the "Who Will Buy?" number, showering the screen with the dramatic, animated reds of the marching band and the strawberries, the lush, lively greens of the grass and trees, and the energetic cerulean blue of the sky. That same musical sequence also boasts a flamboyantly vibrant array of secondary hues for added measure, like the bumblebee yellow dresses of the schoolgirls along with the eye-catching mix of taffy pink and lavender dresses of other dancers. The rest of the movie comes with a warm marigold glow from the candlelights while facial complexions appear natural with revealing, lifelike textures. (HDR10 Video Rating: 84/100) 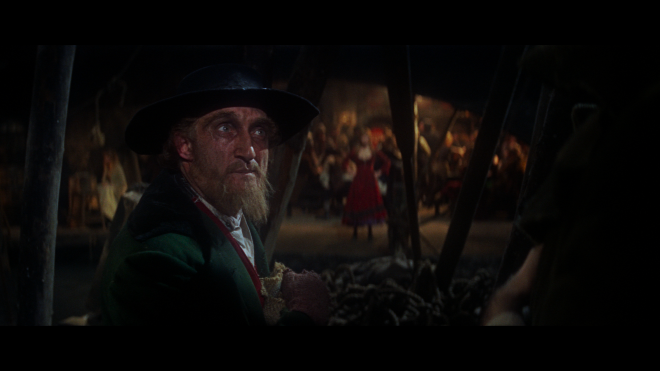 The classic film sings and dances into home theaters with an outstanding Dolby Atmos soundtrack that perfectly complements the visuals. The design is not the sort to test one's system or rival with the more bombastic contemporary musicals. However, from the moment the overture and opening credits are on display, John Green's score enthusiastically fills the room and flawlessly echoes into the surrounds and top heights, generating a fantastically broad and highly engaging half-dome soundstage. Every number from there benefits from the extra breathing as subtle background activity convincingly bounces between the channels, maintaining a great sense of spaciousness, while exhibiting superb distinction in the mid-range and excellent separation in the orchestration.

Dialogue reproduction remains a bit muddled and tricky, making a few conversations and lyrics challenging to clearly make out. A surprisingly hearty and strapping low-end provides an appreciable presence and weight to the various visuals. The rears and overheads are mostly silent in terms of ambient effects, which is not a fault and should be expected from an audio design of this vintage, but the music does plenty of the work to deliver a satisfyingly expansive and sweeping object-based mix for a classic musical. (Dolby Atmos Audio Rating: 86/100) 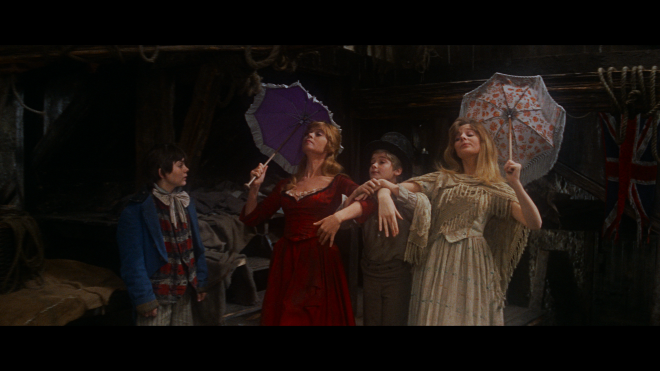 While the UHD houses only the film, the accompanying Blu-ray contains a healthy set of supplements, most of which are ported over from the previous Blu-ray release and the 2013 Twilight Time edition, and they are joined by a pair of new additions. 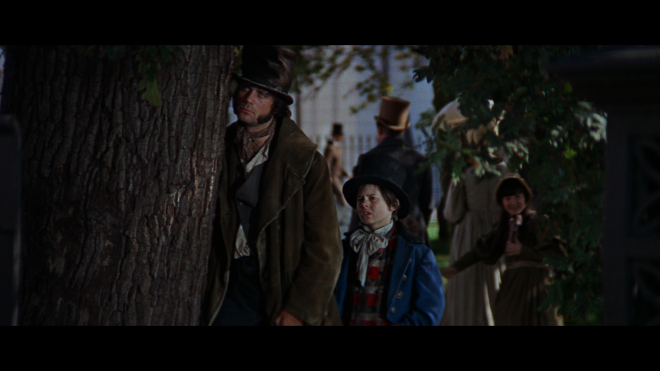 In spite of a few qualms with certain musical numbers failing to accurately complement the story's darker tones, Sir Carol Reed's Oliver! nonetheless remains a boisterously spirited musical classic with much to appreciate and admire. The music and songs by Lionel Bart and John Green are beloved, memorable pieces that undeniably supply the film's best moments with an infectious air of optimism and hope. The previous two Blu-ray releases are handily upstaged by this excellent Ultra HD edition, which boasts a stunning 4K HDR10 presentation and a splendid Dolby Atmos soundtrack. A few of the same bonuses are ported over but joined by a pair of new extras, making the UHD disc a recommended addition.