Cameron Crowe's sports dramedy Jerry Maguire tells a terrifically engaging story with a well-earned, tear-jerking conclusion and features excellent performances by the entire cast. The search for a fulfilling life leads to Ultra HD with a great-looking 4K presentation, a satisfying Dolby Atmos track and joined by a new exclusive bonus. Overall, this UHD edition of the beloved film is a welcomed upgrade and a Recommended addition to the library.

The world of sports and capitalist greed collide with romance and authentic human interaction in Cameron Crowe's beloved dramedy Jerry Maguire, a simple story of a man searching for meaning and purpose when the opportunity at a fulfilling life was right in front of him all along. Overlooking the trite use of the voiceover that ultimately goes nowhere or genuinely affect the plot in any way, I love nearly everything about this story, which Crowe also wrote and produced. From the opening moments, the film makes no qualms about what is at the heart and conflict in the titular character's journey to self-actualization.

Tom Cruise's Jerry hears a kid's concern about his hospitalized father but fails to actually listen to the boy's tearful plea to save his dad from further injury. He frantically writes a mission statement about building more personal relationships, but we later find out he's failed in that too during his bachelor party. Jerry has a talent with words, a knack for excessive schmoozing to sell the talents of other people, but apparently not the ability to evaluate and truly heed what others say because he's never genuinely experienced an intimate personal connection with another. He's a car salesperson who's never driven a car his entire life.

Jerry's metamorphosis to being a better person is a frustratingly slow evolution littered with several mistakes and bad decisions, making his growth feel all the more natural and well-earned. In his pilgrimage, he's joined by his one and only loyal client, the hilariously boastful and swaggering wide receiver Rod Tidwell (Cuba Gooding Jr.). Rod is essentially another version of our central protagonist except his life doesn't feel lacking because he has Regina King standing by his side. Single-mother Dorothy (Renée Zellweger) and her son Ray (Jonathan Lipnicki) provide the opportunity to fill the void, to actually live by his own mission statement, that happiness comes from the authentic connections made with other people. 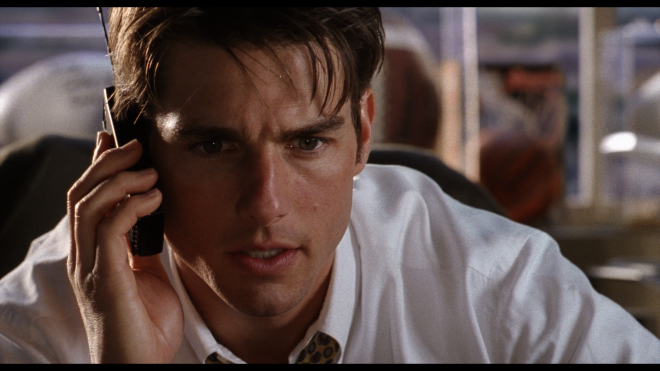 For a more in-depth take on the movie, you can read Luke Hickman's review of the 20th Anniversary Blu-ray Edition HERE.

Sony Pictures Home Entertainment brings Cameron Crowe's Jerry Maguire to Ultra HD Blu-ray as a two-disc combo pack with a flyer for a Digital Copy, which can be redeemed via sonypictures.com and Movies Anywhere. When redeeming said code, users are currently granted access to the 4K UHD version in Dolby Digital Plus 5.1 audio. The triple-layered UHD100 disc sits comfortably opposite a Region Free, BD50 disc inside a black, eco-elite vortex case with a glossy slipcover. At startup, the disc goes straight to a static main screen with the usual options along the bottom while music plays in the background.

A League of Their Own

The search for a fulfilling life brings the beloved sports dramedy to the cozy embrace of Ultra HD with an attractively charming HEVC H.265 encode, giving fans a notable step up over the previous 20th Anniversary Blu-ray edition. Coming from that same remaster of the OCN used for the aforementioned HD release, which was approved by director Cameron Crowe, the native 4K transfer enjoys a noticeable uptick in overall definition with fine lines and objects looking a tad sharper and cleaner. There still remains the occasional soft, blurry moments sprinkled throughout, which appears to be inherent to the original photography, but in general, the video shows better detailing in the clothing, the furniture and in the lettering while facial complexions are highly revealing with pleasing, lifelike textures.

The more appreciable upgrade comes by way of the improved contrast and brightness balance, supplying the whites with a generous gain and a more resplendent brilliance. Specular highlights also enjoy a nice boost, showing a tighter sparkle and polish along metallic surfaces while the clouds in the sky look particularly fluffy. However, the glow from various light fixtures tend to bloom over the finer details though they don't seem to run any hotter than parts of the picture, which again, is the intended result of the highly-stylized aesthetic designed by cinematographer Janusz Kami?ski.

On the other hand, black levels are significantly inkier with a lovely, raven sheen in some of the clothing and hair while the swarthy, midnight shadows maintain excellent visibility within the darkest, murkiest corners of the frame. Awash in a noticeable but still fine layer of natural grain throughout, the 1.85:1 image has a beautiful cinematic appeal with a good deal of appreciable depth. Making this a clear winner, the HDR10 presentation also showers the drama and comedy in a gorgeous palette that heavily favors a warm yellow and amber scheme, giving the entire film an inviting honey-marigold and mustard-orange sheen. Contrasted by the rich indigo blues and deep sapphire teals, the reds and greens are allowed to really pop from the screen, making this the best the film has ever looked on home video. (Video Rating: 80/100)

Crowe's film has never been one for testing a sound system's capabilities or ever left much of an impression in the audio department, not that it was ever expected to given it is a dialogue and character-driven romance. And things don't really improve much in this Dolby Atmos soundtrack, which remains a very front-heavy presentation and nonetheless makes for an excellent complement to the visuals. Granted, imaging feels a tad broader with background activity smoothly bouncing between the fronts while scarcely bleeding into the top heights. The mid-range also seems to exhibit slightly better fidelity and warmth, particularly in the music, but overall, it's not by much. Meanwhile, the surrounds are inconsistently and sporadically employed while the height channels remain largely silent. The track's real strength comes from the crisp, precise dialogue reproduction, displaying outstanding intonation in the performances. Likewise, the low-end provides a healthy palpable weight to the music, especially in the second half of the film.

While the accompanying Blu-ray disc ports over the same set of supplements as its 20th Anniversary predecessor, this UHD edition adds one amusing exclusive.

From writer & director Cameron Crowe, Jerry Maguire follows the titular character on a personal pilgrimage of self-actualization where he learns to live up to the expectations of his own mission statement. With great performances by Tom Cruise, Cuba Gooding Jr., Renée Zellweger and Regina King, the sports dramedy tells a terrifically engaging story with several pitfalls that drive character development and lead to a well-earned, tear-jerking conclusion. The search for a fulfilling life leads to Ultra HD with a great-looking 4K HDR10 presentation and a satisfying Dolby Atmos soundtrack, providing fans with an appreciable upgrade over its Blu-ray counterpart. The same assortment of bonuses is joined by a new featurette exclusively available on the UHD disc, making this a recommended addition to the library.