Featuring Peter O'Toole's memorable performance as the titular character, David Lean's historical epic Lawrence of Arabia remains a brilliant, mesmerizing cinematic masterpiece that could only be best appreciated on a big screen. Shy of its 60th Anniversary, the classic film rides into 4K Ultra HD with a reference-quality Dolby Vision HDR and riveting Dolby Atmos presentation. With one new exclusive joining a strong set of supplements, this UHD edition is a must-own for cinephiles and makes for a Highly Recommended addition to the library.

If there exists an established, conventional "going-native" narrative, then David Lean's Lawrence of Arabia is the definitive masterwork. The spectacularly beautiful film based on the life of T. E. Lawrence (a memorably remarkable Peter O'Toole) is the standard by which all other such narratives should be estimated and measured. Working very closely with cinematographer F.A. Young (49th Parallel, Treasure Island, Doctor Zhivago), Lean's classic epic historical drama is magnificent in its scope, capturing every detail of the culture, and breathtakingly stunning in its scale, showing the majestic grandeur and splendor that seduced the British Colonel.

While we continue celebrating the elegance in the photography and the notable achievements in the creative editing, we should not overlook the brilliance in Robert Bolt and Michael Wilson's script, which goes deeper into our hero's psyche than simply being charmed by the homeliness of a culture he initially believed to be savage or primitive. Here, he loses a part of himself, struggling to maintain a sense of identity while also battling the post-traumatic effects of war, displaying a genuine internal conflict with a loyalty to his country versus a commitment to a greater and arguably nobler cause. Lawrence of Arabia is a splendidly brilliant cinematic masterpiece that continues to impress and mesmerize. 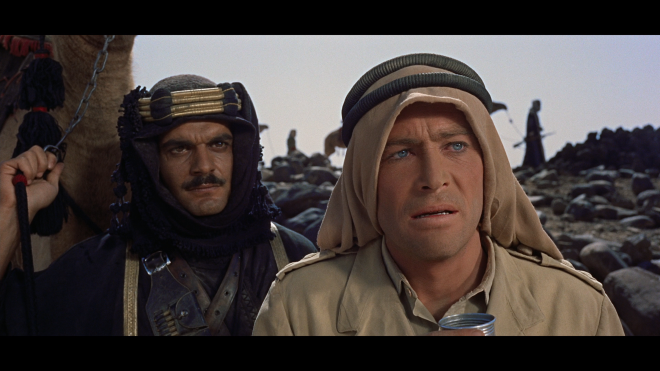 For a more in-depth take on the movie, you can read our excellent review of the 2012 50th Anniversary Blu-ray Edition HERE.

Sony Pictures Home Entertainment brings David Lean's Lawrence of Arabia to Ultra HD Blu-ray as a four-disc combo pack with a flyer for a Digital Copy, which can be redeemed via sonypictures.com and Movies Anywhere. When redeeming said code, users are granted access to the 4K UHD version with legacy Dolby Digital audio. The 228-minute epic spans a pair of Ultra HD discs housed inside a black, eco-elite vortex case with a glossy slipcover. The first triple-layered UHD100 disc contains approximately 140 minutes of the film while a second dual-layered UHD66 disc contains the rest. Both are joined by another BD50 disc featuring the entire film and a BD25 disc with the special features. At startup, the disc goes straight to a static main screen with the usual options along the bottom while music plays in the background.

Struck from the same 8K scan of the meticulously restored 70mm camera negatives and later mastered to a 4K digital intermediate, the classic epic drama rides into Ultra HD on a jaw-droppingly gorgeous, reference-quality HEVC H.265 encode that amazingly surpasses its Blu-ray brethren. The native 4K transfer showcases sharper, better-defined details from start to finish, exposing the intricate stitching and threading in the costumes. The enhanced contrast levels not only show brighter, more dramatic whites, but the improvement also allows for better visibility in the mesmerizing photography of the vast, infinite desert vistas. The unique features in the rock formations and in the architecture of buildings are plain to see at all times while the specular highlights display a radiantly intense yet crisp and narrow splendor in the hottest spots without washing away the more minute aspects.

F.A. Young's memorable cinematography also enjoys a brand-new lease on life thanks to Dolby Vision, supplying the action and drama with a more sumptuous and vibrant assortment of colors throughout. The HDR presentation makes the cerulean blue skies really pop, and the greens of some foliage bloom while the reds of various outfits and furnishings are much richer and dynamic. The varied array of browns, tans and sepias of the desert are more animated while explosions bursts with spirited, fiery oranges. Facial complexions reveal the smallest wrinkle, pore and stumble, but they also appear more lifelike and accurate to the blisteringly hot climate. Meanwhile, black levels come with an inkier, sootier appeal while nighttime sequences are bathed in silkier midnight shadows that maintain excellent visibility within the darkest corners.

Awash in a very fine layer of natural gain, the 2.20:1 image is simply stunning to behold on UHD, and the classic film has never looked better. (Dolby Vision Video Rating: 96/100)

Complementing the spellbindingly beautiful video presentation is a riveting Dolby Atmos soundtrack, offering a dramatic improvement over its DTS-HD MA counterpart, which is also included on the disc for comparison.

Although still maintaining a very front-heavy presentation, the extra breathing room allows for various audio effects to better discretely travel into the surround channels. Granted, this object-based version is not the sort to battle with the current crop of war films, but the track feels broader and significantly fuller, exhibiting better warmth and superb clarity in the midrange. The upper ranges display the same level of exceptional distinction and separation in Maurice Jarre's iconic score as they do during the loudest moments of warfare. Speaking of which, the music is most effective in engaging the listener, extending into all the channels and generating an enveloping hemispheric soundfield. Action sequences come with background activity spreading evenly across the screen while also subtly bleeding into the top heights, such as an early scene with the echo of German airplanes filling the room.

Meanwhile, dialogue reproduction is distinct and precise at all times with distinguished intonation in the performances. Most impressive is a robust and surprisingly powerful low-end providing a deep, impactful presence to the explosive action while occasionally energizing the room and nicely shaking the couch. (Dolby Atmos Audio Rating: 88/100)

The same set of supplements from the 50th Anniversary Blu-ray are ported over for this Ultra HD edition while throwing one small exclusive to boot. According to Sony, the package of bonuses is apparently missing some intended material and are currently working to rectify the issue. We will update this section as soon as the correct bonus features are available.

UPDATE From Sony About Disc Replacement Program:
Due to a manufacturing error, the Columbia Classics 4K Ultra HD Collection currently includes an incorrect LAWRENCE OF ARABIA special features disc, which does not include the full amount of intended content. This does not affect the 4K UHD presentation of the film itself. The correct special features disc will be available to consumers who purchase the set, whether as a pre-order or as part of a future order, pending the eventual availability of sets that already have the correct disc included. Consumers should receive communication from their retailer about this corrected disc soon, but may contact the Sony Pictures Home Entertainment Customer Care team with any questions at [email protected]sony.com or 1-800-860-2878.

David Lean's Lawrence of Arabia is a splendidly brilliant cinematic masterpiece that continues to mesmerize and is the sort of film that could only be best appreciated on the biggest screen possible. Featuring remarkably memorable performances from Peter O'Toole, Anthony Quinn and Omar Sharif, the classic epic historical drama remains a feast for the eyes with an enthrallingly engaging tale of one's many journeying of self-discovery against the backdrop of the vast, infinite desert. Just shy of its 60th Anniversary, the film rides into 4K Ultra HD with a magnificent, reference-quality Dolby Vision HDR presentation and a riveting Dolby Atmos soundtrack, providing cinephiles not only with an appreciable upgrade over its Blu-ray counterpart but also with the most beautiful home video edition of the classic ever. With one new exclusive bonus joining the same set of supplements as before, this UHD edition makes for a highly recommended addition to the library.