A League of Their Own - 4K Ultra HD Blu-ray (Columbia Classics Vol.1)

Of the thousand stories from World War II about the many ways people contributed to the war effort, the story of the All-American Girls Professional Baseball League (AAGPBL) was rarely ever mentioned and went almost forgotten. That is until journalist, politician, filmmaker and professor Kelly Candaele wrote a story about the time his mother and aunt played for AAGPBL and was made into the now-classic sports dramedy A League of their Own. Today, this fictionalized telling of the league and their eventual inclusion to the Baseball Hall of Fame is one of the greatest underdog stories ever told. Directed by Laverne & Shirley's Penny Marshall, the plot doesn't follow the traditional sports narrative where an unlikely team or athlete inevitably faces off against the current sure-bet favorite or the top-dog champion.

Instead, these women went up against a much more pervasive and abstract Goliath. Their conflict was with the rigidly-fixed patriarchal system that gave them a taste of their true potential, performing just as well at the men's professional team, yet they were still regarded as little more than sideshow attractions. Although some characters, like Jimmy Dugan (Tom Hanks), were loosely based on real people, everyone is essentially an amalgamation of ideologies competing with one another, such as Dottie Hinson (Geena Davis) battling herself, stuck between two worlds rather than seeing the two can coexist peacefully.

The women were expected to uphold traditional gender roles and normatives in spite of participating in a sport generally viewed as a masculine activity. Meanwhile, Jimmy stands in for early 20th-century society — at first, without any confidence in the women's abilities but slowly embracing the tides of change and accepting the women as legitimate ballplayers. And for that, Marshall's film remains an inspiring and satisfying watch. 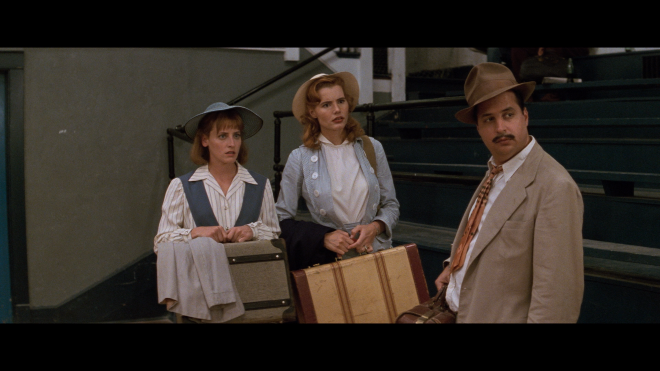 For a more in-depth take on the movie, you can read our review of the 25th Anniversary Blu-ray Edition HERE.

Sony Pictures Home Entertainment brings Penny Marshall's A League of Their Own to Ultra HD Blu-ray as a two-disc combo pack with a flyer for a Digital Copy, which can be redeemed via sonypictures.com and Movies Anywhere. When redeeming said code, users are granted access to the 4K UHD version in Dolby Vision HDR and Dolby Atmos audio. The triple-layered UHD100 disc sits comfortably opposite a Region Free, BD50 disc inside a black, eco-elite vortex case with a glossy slipcover. At startup, the disc goes straight to a static main screen with the usual options along the bottom while music plays in the background.

The sports dramedy hits a homerun on Ultra HD with a spectacularly beautiful HEVC H.265 encode, easily defeating it's 25th Anniversary Blu-ray opponent in every respect. Struck from a brand-new remaster of the original 35mm camera negatives, this native 4K transfer boasts razor-sharp definition, from the individual blades of grass in the outfield to the fine stitching in the costumes and baseball uniforms. Every strand of hair and facial whisker is distinct, and facial complexions reveal pores, wrinkles and negligible blemishes with lifelike textures. There are a couple moments where the sharpest edges along the stadium seats noticeably wobble and waver, bringing the score down a tad, but overall, the 2160p picture delivers excellent detailing throughout.

With the improved contrast balance, we can better out the lettering of advertisements as well as the tiniest imperfections while the whites of uniforms and other clothing are crisper with a significantly punchier pop. Likewise, the specular highlights are most impressive, supplying every scene with a more intense and spirited energy, especially in the daylight sequences where we can appreciate a twinkle in the eyes, a vivid luminosity in the clouds and a beaming glow in the lights without washing over the finer details. On the other end of the spectrum, black levels are notably richer with luxurious-looking midnight shadows, giving the women's hair a realistic silky polish and providing the 2.39:1 image with a stunning cinematic quality.

Miroslav Ondricek's cinematography also benefits and has never looked better, thanks to a considerably more vibrant and sumptuous color palette. The reds in the makeup and various articles of clothing come with an eye-catching and animated splendor, and the greens are lively and full-bodied while the blues are terrifically diverse, from the navy blues of baseball caps and cerulean shades of the sky to the sapphire teals of the stadium seats. A majority of the film's aesthetic comes with a yellowish-sepia tone, so the secondary hues expectedly enjoy the most dramatic improvement, especially the blush pink of the Peaches and the golden canary yellows of the Belles. All the while, flesh tones are also more lifelike and true with a better rosy-peach complexion in the entire cast. (Video Rating: 90/100)

The beloved classic comedy continues its winning streak with a fantastic and surprisingly immersive Dolby Atmos soundtrack, which amazingly complements many conversations with the sounds of birds chirping in the distance or flying directly overhead. The cheering roars and applause of the stadium crowds also reverberate all around and encircle the listener while the announcer's voice echoes from above, generating an unexpectedly good and satisfying hemispheric soundfield. Meanwhile, imaging feels broad and spacious, continuously kept busy with a variety of background activity convincingly panning between the channels and into the off-screen space, such a people talking or cars driving in the distance. Hans Zimmer's score is highly engaging, effectively bleeding into the surrounds and top heights while exhibiting superb clarity and definition within the orchestration. Vocals are always precise and distinct with appreciable intonation in the performances and never drowned out by other activities in the background. Not surprisingly, the low-end is never really put to work here, but it is nonetheless adequate and sufficient to provide some weight and presence to the visuals and the music. (Dolby Atmos Audio Rating: 86/100)

The same set of supplements as before are now joined by a pair of new surprises.

Nearly thirty years later, Penny Marshall's A League of Their Own remains an inspiring and satisfying underdog story about professional baseball players battling a society that wasn't ready to accept them. Featuring excellent performances by Geena Davis, Tom Hanks, Madonna and Lori Petty, the now-classic sports dramedy charmingly captures this important but almost forgotten moment in sports history. The beloved film hits a homerun on Ultra HD with a spectacularly beautiful 4K HDR10 presentation and a surprisingly immersive Dolby Atmos soundtrack, easily defeating its Blu-ray counterparts to become the champion. The same set of supplements is joined by a few new bonuses, making the overall UHD edition a highly recommended addition to the hall of classic sports films.