Richard Attenborough's epic drama Gandhi is an emotional, inspiring journey of a historic legend, a classic film featuring the distinguished, career-defining performance of Sir Ben Kingsley. Shy of its 40th anniversary, the fight for freedom peacefully marches to Ultra HD with a reference-quality 4K video presentation, a highly-satisfying Dolby Atmos track but the same set of supplements. Still, the UHD edition of the classic film is Highly Recommended.

It never ceases to amaze me how contemporary experiences or current events can shape our appreciation and understanding of any work of art, such as film. Richard Attenborough's historical epic Gandhi has always been a beloved favorite, but watching with the lens of our present sociopolitical climate, the classic biodrama now carries with it a renewed poignancy and gravitas. The story of Mahatma Gandhi (a still astonishing Ben Kingsley in his award-winning, career-defining role) and his remarkable campaign for India's independence feels all the more harrowing and moving today. His crusade, which matured into a national movement, can be understood not only as a fight for his country's freedom but also as a relatable battle demanding that his compatriots be respected as autonomous persons.

In all this, Attenborough's direction is simply superb, furnishing the civil rights activist's most celebrated actions, such as the Salt March, with an inspiring urgency as well as a mythical, larger-than-life spectacle. The cinematography of Billy Williams and Ronnie Taylor is equally impressive and captivating, capturing the natural beauty of India along with the country's more distressed and impoverished areas. In between all this are the intimate, private conversations that not only humanize the historical figure turned heroic legend but also reveal Gandhi's seemingly natural talent for strong leadership. And frankly, the brilliant work by the filmmakers in those moments makes the scenes of police brutally beating nonviolent protesters during peaceful demonstrations all the more gut-wrenching and almost too painful to watch. 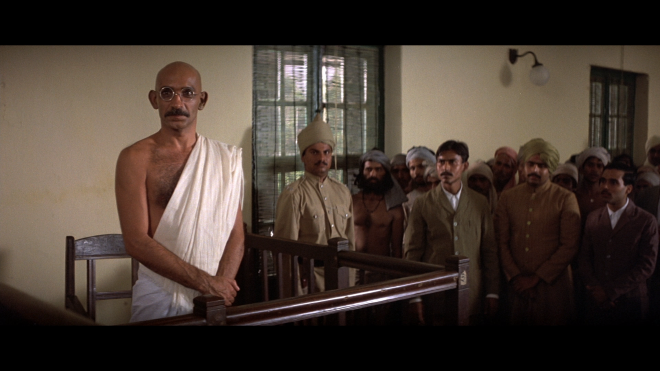 Sony Pictures Home Entertainment brings Richard Attenborough's Gandhi to Ultra HD Blu-ray as a four-disc combo pack with a flyer for a Digital Copy, which can be redeemed via sonypictures.com and Movies Anywhere. When redeeming said code, users are granted access to the 4K UHD version in Dolby Vision HDR and Dolby Atmos audio. The 191-minute historical drama spans a pair of UHD66 discs, accompanied by another BD50 disc featuring the entire film and a BD25 disc with the special features. All four are housed inside a black, eco-elite vortex case with a glossy slipcover. At startup, the disc goes straight to a static main screen with the usual options along the bottom while music plays in the background.

A League of Their Own

The historical epic peacefully marches to Ultra HD with a phenomenally stunning and jaw-droppingly gorgeous HEVC H.265 encode that is pure reference-quality. Struck from a brand-new remaster of the original 35mm camera negatives, the native 4K transfer is significantly sharper than its Blu-ray predecessor. From beginning to end, Individual hairs and whiskers are more distinct, the threading in the traditional Indian embroidery and various garments is discrete throughout, and facial complexions are highly revealing with extraordinary lifelike textures.

Thanks to the improved contrast, fans can plainly make out every facet, feature and object decorating the background while the whites of clothing are notably beaming and resplendent. Vividly intense but very narrow specular highlights shower the 2160p picture with a remarkable, glistening glow in daylight exteriors, a dazzling sparkle on Gandhi's metal-rimmed eyeglasses, and a realistically eye-catching polish along metallic surfaces. Black levels also enjoy a salient boost, looking richer and inkier in every scene while shadows are a raven, velvety shade with outstanding gradational differences and details. Awash in a fine layer of natural grain, the beautiful three-dimensional 2.39:1 image has a splendid film-like quality.

The award-winning cinematography of Billy Williams and Ronnie Taylor also benefits from the jump to UHD, as the HDR10 presentation shows a more opulent and sumptuous array of colors. Providing the classic film with a sensational new lease on life, the 4K video seems fresh and reinvigorated with brilliantly dynamic marigolds, oranges and yellows in the various Indian wrapped garments. Much of the palette consists of attractive earth-tones, showering the drama and action with lots of browns, tans and sepias, and flesh tones appear healthier and truer to the climate than its HD SDR counterpart. At the same time, primaries are far more dramatic and animated, especially the reds and greens while blues show excellent nuances between the different shades, making this UHD edition a marvelous feast for the eyes and earning it the extremely rare perfect score. (Video Rating: 100/100)

Attenborough's emotional journey to freedom arrives with a fantastic and highly satisfying Dolby Atmos soundtrack, supplying the stunning visuals with several appreciable enhancements over its Dolby TrueHD counterpart. However, given its original audio design and a dialogue-driven drama, the story remains a very front-heavy presentation. Only, the extra-breathing room allows for a wider sense of presence as the background activity moves more convincingly between the three fronts and very subtly into the top heights, generating a broad and expansive half-dome soundstage. The music of Ravi Shankar and George Fenton also lightly bleed into the overheads while exhibiting extraordinary warmth and definition in every musical piece and instrument. Occasionally, atmospherics sporadically but also discretely pan into the sides and rears, joined, from time to time, by the local wildlife randomly flying above the listening area, but such moments are far and few in between. Dialogue reproduction is superbly clean and well-prioritized while an adequate but also palpable low-end provides a weighty heft to certain scenes. (Dolby Atmos Audio Rating: 86/100)

The same set of supplements are ported over from the previous 25th Anniversary release but only available on the accompanying BD discs while the UHD comes with a pair of Trailers.

Just shy of its 40th anniversary, Richard Attenborough's Gandhi is a sprawling historical epic that spectacularly captures the life of a now mythical, heroic legend who inspired a successful campaign for his country's independence. Featuring a distinguished, award-winning performance by Sir Ben Kingsley, the classic biodrama continues to inspire with a renewed sense of poignancy and gravitas in light of our current sociopolitical climate. The emotional journey to freedom peacefully marches to Ultra HD with a stunning, reference-quality 4K HDR10 presentation and a highly satisfying Dolby Atmos soundtrack. With a healthy selection of supplements to boot, the overall UHD edition of the classic film is highly recommended.