Starring George C. Scott and Peter Sellers, Stanley Kubrick's bleakly dark satire Dr. Strangelove remains an immensely biting black comedy that manages to deliver the laughs. The celebrated classic drops on 4K Ultra HD with a great-looking HDR10 presentation and a great pair of DTS-HD MA soundtracks. With a wealth of supplements and one lone exclusive, the overall UHD package is Highly Recommended for fans and Kubrick collectors alike.

My first encounter with Stanley Kubrick's celebrated classic Dr. Strangelove was on television one Sunday afternoon when I was a kid. At the time, I was much too young to fully appreciate the satirical genius of this reinterpretation of Peter George's political thriller Red Alert. However, I remember enjoying the bizarre wacky behavior of the characters, the dark cartoonish zaniness of their conversations and the comical nightmarish scenario of government officials at the brink of WWIII and nuclear holocaust. Perhaps, it was that eerily uneasy subtext of the story which kept me engaged as a kid. But I was also greatly amused by George C. Scott's General Turgidson slowly descending into tantrum hysterics and Peter Sellers's eccentric but strangely funny former-Nazi scientist Dr. Strangelove.

Still, it was only with repeat viewings over the years, and as I grew older, that I really admired what Kubrick was doing and truly understood the brilliance behind this awesome black comedy. In a fictional tale incited by a simple question ("What happens when the fail-safe fails?"), the legendary filmmaker littered his Juvenalian satire with bitingly deceptive and ridiculously nuanced irony — the best-known examples being SAC's motto "Peace is Our Profession" plastered everywhere and Sellers's President Muffley yelling, "Gentlemen, you can't fight in here! This is the War Room!" My favorite moment, however, remains Sellers's Captain Mandrake confronting Sterling Hayden's paranoid General Ripper. The camerawork, editing and performances in that single long take perfectly encapsulates Kubrick's bizarre, bleakly-dark sense of humor and how quickly a witty situation can become deadly serious. 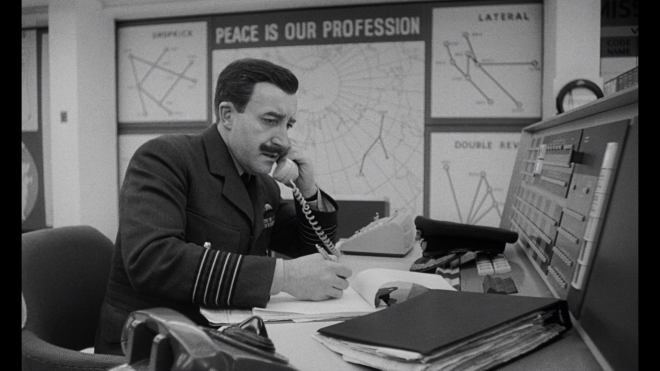 For a more in-depth take on the movie, you can read Bryan Kluger's review of the 2016 Criterion Collection Blu-ray HERE.

Sony Pictures Home Entertainment brings Stanley Kubrick's Dr. Strangelove to Ultra HD Blu-ray as a two-disc combo pack with a flyer for a Digital Copy, which can be redeemed via sonypictures.com and Movies Anywhere. When redeeming said code, users are granted access to the 4K UHD version on some platforms while others only offer the HDX SDR with legacy Dolby Digital 5.1 audio. The dual-layered UHD66 disc sits comfortably opposite a Region Free, BD50 disc inside a black, eco-elite vortex case with a glossy slipcover. At startup, the disc goes straight to a static main screen with the usual options along the bottom while music plays in the background.

Currently only available with Sony's Columbia Classics Volume 1 6-film collection which also includes:
Mr. Smith Goes to Washington
Lawrence of Arabia
Gandhi
A League of Their Own
Jerry Maguire

The classic black comedy drops the bomb on Ultra HD armed to the hilt with a great-looking HEVC H.265 encode. Due to the original camera negatives accidentally destroyed and forever lost, Sony performed an extensive restoration effort in the mid-2000s from the best available 35mm fine-grain positives and other prints. Those elements were later mastered to 4K digital intermediate, which has served as the source for every home video release since, including this UHD edition.

With that in mind, the native 4K transfer may not offer a significant upgrade over its previous Blu-ray versions, but it negotiates a welcomed step up. The video shows slightly sharper details in the uniforms and better clarity of background information decorating the War Room. The individual hairs are discrete, and facial complexions are highly revealing, exposing wrinkles, stubble and minor blemishes. Although there are several moments of mild softness and poor resolution sprinkled throughout, the 1.66:1 image is nonetheless satisfying, awash in a pronounced, heavy layer of natural grain, providing the picture with a lovely film-like quality.

The more worthwhile and appreciable aspect of this HDR10 presentation is the improved contrast and brightness balance. Blacks are notably richer with excellent gradational differences in the shades and better visibility of the finer details within the darkest corners. Whites enjoy a significant boost, as well, looking more luminous and crisper than its HD SDR counterpart. Specular highlights are a bit more nuanced but nonetheless supply the 2160p video with a brilliant sparkle off metallic surfaces, a tighter bloom from the light fixtures and a narrower glow in the buttons of consoles, allowing for better clarity. (Video Rating: 82/100)

The brink of nuclear holocaust comes equipped with an identical DTS-HD MA 5.1 soundtrack enjoyed on the 2016 Criterion Collection Blu-ray. Sony has also included a DTS-HD 1.0 monoaural track, but it does not reveal any significantly discernable differences from its LPCM mono counterpart. Fans can't go wrong with either version, as they both sound terrific. For a more in-depth take on the audio quality, you can read our reviews of the Criterion Collection linked above or the 2009 DigiBook HERE. (Audio Rating: 78/100)

In an unexpected turn of events, the accompanying Blu-ray disc contains the same set of bonus features as the 2009 DigiBook release, but the UHD disc impressively houses the supplemental material from the Criterion Collection edition, giving those who actually enjoy sifting through special features the best of both worlds.

Stanley Kubrick's celebrated classic Dr. Strangelove remains an immensely witty, biting black comedy that manages to always offer something new with each viewing. Starring George C. Scott and Peter Sellers in one of his memorable performances as the titular character, the bleakly dark satire of failing to predict the human element when guarding against nuclear war still makes me laugh while also admiring Kubrick's brilliant camerawork. The classic film drops the bomb on Ultra HD with a great-looking 4K HDR10 video presentation that offers a welcomed step-up over previous Blu-ray iterations, but a pair of DTS-HD MA audio tracks that don't display any discernible differences to their earlier lossless counterparts. The same set of supplements as before is joined by one lone exclusive featurette, yet the overall UHD package is highly recommended for fans and Kubrick collectors alike.