Frank Capra's Mr. Smith Goes to Washington remains a timeless and emotionally inspiring classic that has never felt more poignant and pertinent as it does now. The classic film marches into the halls of Ultra HD with a stunningly gorgeous 4K HDR10 video, but the same mono DTS-HD MA track and set of bonuses as the 2014 DigiBook release. Nevertheless, the overall UHD package is Highly Recommended.

After eighty-years since its initial release, Frank Capra's Mr. Smith Goes to Washington remains a deeply inspiring drama that amazingly feels poignant and relevant no matter the period when it's being enjoyed. For me, personally, it endures as the greatest underdog story that still manages to bring tears to my eyes: first, when our naïve idealist and ordinary person Jefferson Smith (James Stewart) enthusiastically wants to respond to each donation letter and later, after hours of filibustering and holding a handful of telegrams, he gives a heartfelt speech of never giving up. And today, Capra's film feels all the more pertinent.

The brilliance in this modernized David & Goliath allegory is seeing Smith's genuine faith in a just, equitable and unbiasedly fair government system slowly chip away and continuously met skeptical cynicism, like his secretary Clarissa Saunders (Jean Arthur), Senator Joseph Paine (Claude Rains) and various others. As we cheer him on and rally behind Smith — thanks to Stewart's unforgettably moving performance — we are made to witness his heartbreaking disillusionment and the painful loss of that aforementioned faith. He is the modern Don Quixote battling enormously powerful bureaucratic windmills. 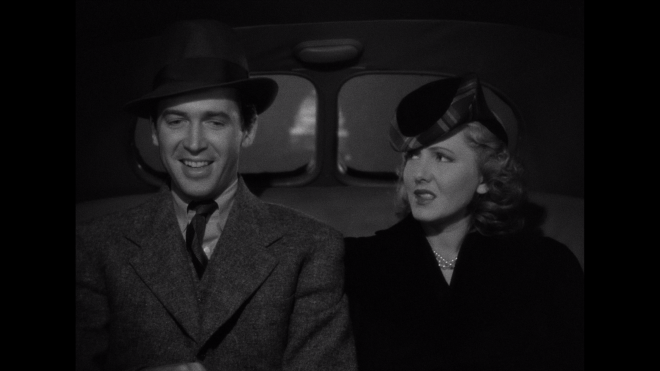 For a more in-depth take on the movie, you can read David Krauss's excellent review of the 2014 Blu-ray DigiBook HERE.

Sony Pictures Home Entertainment brings Frank Capra's Mr. Smith Goes to Washington to Ultra HD Blu-ray as a two-disc combo pack with a flyer for a Digital Copy, which can be redeemed via sonypictures.com and Movies Anywhere. When redeeming said code, users are granted access to the HDX SDR version on VUDU, AppleTV and Amazon while MoviesAnywhere and FandangoNOW offer the 4K UHD version with legacy Dolby Digital audio. The dual-layered UHD66 disc sits comfortably opposite a Region Free, BD50 disc inside a black, eco-elite vortex case with a glossy slipcover. At startup, the disc goes straight to a static main screen with the usual options along the bottom while music plays in the background.

Currently only available with Sony's Columbia Classics Volume 1 6-film collection which also includes:
Lawrence of Arabia
Dr. Strangelove
Gandhi
A League of Their Own
Jerry Maguire

Don Quixote Smith walks into the halls of Ultra HD with stunningly gorgeous HEVC H.265 encode, showing a welcomed step-up over 2014's Blu-ray DigiBook. Struck from the same restoration and remaster as that release, the native 4K transfer displays better definition throughout, revealing some of the finer details in the furniture and the threading in the clothing, especially in the men's suits. Close-ups expose pores, mild stumble in the men and the tiniest wrinkles in the entire cast while individual hairs are razor-sharp and discrete. There are the occasional soft moments and mild, negligible drops in resolution, but overall, the classic drama has never looked better and, arguably, the best it ever could on home video.

Awash in a fine layer of natural grain, the HDR10 presentation also features lush, velvetier blacks with impressive gradational differences in the various shades. Visibility in the darkest corners and shadows is superb, as in the scene when Saunders and Smith talk outside the Lincoln Memorial. Furthermore, contrast enjoys a welcomed boost. Admittedly, it's a major jump, but whites are a bit more brilliant and vivid. More notable, however, is the unexpected improvement in specular highlights providing the cinematography with a radiantly crisp sparkle in the metal-frame eyeglasses and an intense glow from lamps while revealing more details within the hottest areas. (Video Rating: 92/100)

Our idealistic but heroic average Joe chases bureaucratic windmills equipped with the same DTS-HD MA 1.0 monoaural soundtrack enjoyed on its Blu-ray counterpart. For a more in-depth take on the audio quality, you can read our review HERE. (Audio Rating: 80/100)

The same set of special features are ported but only available on the accompanying BD disc.

Frank Capra's timeless classic Mr. Smith Goes to Washington continues to be one of the most inspiring underdog stories ever told, a modern-day David & Goliath allegory about sociopolitical idealism always under threat of government corruption and cynicism. Eighty years since its release and in light of our current tumultuous political climate, James Stewart's harrowingly moving fight for justice and against losing faith in the system has never felt more poignant and pertinent as it does now. The classic film marches into the halls of Ultra HD with a stunningly gorgeous 4K HDR10 video presentation showing a welcomed step-up over its Blu-ray counterpart, but the same mono DTS-HD MA soundtrack and set of bonuses are ported over from the previous DigiBook release. Nevertheless, the overall UHD package is highly recommended for fans.