Defying all expectations, the Mission: Impossible series miraculously continues to grow in both visual spectacle and engaging storytelling, as each new installment somehow manages to be better than its predecessor, partly thanks to the evolution and growth of the franchise's central hero, Ethan Hunt. Fans can now enjoy all six films as if for the first time on 4K Ultra HD, featuring excellent Dolby Vision HDR presentations, outstanding high-resolution audio but the same set of supplements as the Blu-rays. Overall, the 13-disc UHD package is Recommended and makes for a great addition to the library.

Both the Fast & Furious and Mission: Impossible films have defied expectations over the years, as each new installment only seems to improve upon its predecessor. But whereas the Furious entries can function as standalone popcorn actioners hellbent at marveling moviegoers with insane vehicular mayhem, the Impossible franchise is a smartly-crafted interconnected series that grows and advances with its central hero, Ethan Hunt (Tom Cruise). While also astounding audiences with plenty of stunning visual spectacle and astonishing feats of daredevilry, every new sequel expands on the character's mythos, showing that he and his allies live in a larger universe that affects his personality and decisions. Action sequences are a direct result of his choices, the outcome of a decisiveness that has potentially been influenced by the events of the movies which have preceded it. And it's with this in mind that makes the Mission: Impossible series so entertaining, watching a talented, astute and otherwise sensible individual afflicted by years of sacrifice, conscious of the impact his choices have had on his personal life, as well as the world around him. 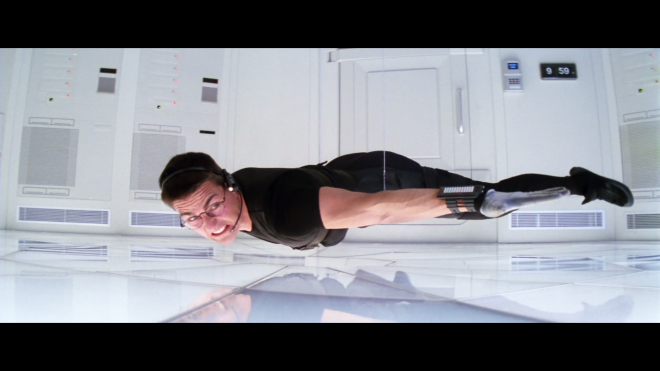 Paramount Home Entertainment brings the Mission: Impossible series to 4K Ultra HD Blu-ray as a thirteen-disc combo pack dubbed the 6-Movie Collection with a Digital Copy code for the entire franchise. Said code unlocks a 4K UHD digital copies on services like iTunes and Vudu. The first five dual-layered UHD66 discs and one triple-layered UHD100 disc come inside the standard black, eco-elite case with two center spindles. Meanwhile, the remaining seven Region Free Blu-ray copies are packaged inside a thicker-than-normal blue, eco-elite case with two center spindles. The two packages come with a glossy, side-sliding slipcover. At startup, viewers are greeted with full-motion clips, the usual menu selections along the bottom and music.

Disavowed IMF agents fight the state-of-the-art espionage world of Ultra HD with mostly excellent and highly-satisfying HEVC H.265 encode in Dolby Vision HDR. As would be expected, the last three entries of the franchise look the best and the first two are arguably the weakest. But overall, with improved contrast, brightness and a wider color gamut, all six movies have never looked better than in these 4K presentations.

Accompanying the new and improved video, the franchise is also joined by a range of excellent and reference-quality audio presentations. A few years ago when the original trilogy first hit Blu-ray, the three films arrived with legacy Dolby Digital audio, but for Ultra HD, they have been upgraded to lossless 5.1 Dolby TrueHD. The last three feature the same soundtracks also enjoyed on their BD counterparts. More specifically, Ghost Protocol comes with a 7.1 Dolby TrueHD track, while Rogue Nation and Fallout are equipped with Dolby Atmos soundtracks.

All the same assortment of supplements are ported over from previous home video releases. The commentary tracks are shared with the UHD discs, and the rest of the special features can be found on the accompanying Blu-rays. You can read more about the bonuses in the individual links above.

With the last three entries, the Mission: Impossible series has defied all expectations, as each new installment somehow progresses for the better both in visual spectacle and engaging storytelling. Much of the enjoyment comes from watching the franchise's central hero, Ethan Hunt, grow and evolve over the years with each new adventure taking its toll on his personality and informing his decision-making. Fans can now enjoy all six films as if for the first time on 4K Ultra HD, featuring excellent Dolby Vision HDR presentations that appreciably improve on their HD SDR counterparts and are accompanied by outstanding high-resolution audio soundtracks. Although the same set of supplements are ported over, the overall UHD package is Recommended and makes for a great addition to the library.

Sale Price 61
List Price 83.99
Buy Now
3rd Party 76.75
In Stock.
See what people are saying about this story or others
See Comments in Forum
Previous Next
Pre-Orders
Tomorrow's latest releases