Currently popular filmmaker J. J. Abrams made his directorial film debut in Mission: Impossible III, the third installment in the action espionage franchise that also marks a turning point in the series as the personal saga in the life of super-secret agent Ethan Hunt. The IMF saves the world once more on 4K Ultra HD equipped with a lovely Dolby Vision HDR presentation, a reference-quality Dolby TrueHD 5.1 soundtrack and the same set of supplements, making the overall package Recommended for fans of the series.

After making a successful impact in television, Lost creator J. J. Abrams transfers his unique eye for thrilling spectacle to the third installment of the action espionage franchise. And in Mission: Impossible III, the writer of Forever Young and Armageddon makes his feature-length directorial debut by establishing the series into essentially the Ethan Hunt saga, fusing together the visual sensationalism of its predecessors with the character's previously-unexplored personal life. The second sequel still carries that episodic feel reminiscent of the original TV series on which it's very loosely inspired by, but its mission is now to follow Hunt and explore the toll each potentially-fatal and near-reckless assignment has on his desire for normalcy. And amazingly, Abrams' signature brand, a curiously fascinating balance of the eccentrically conventional that's evocative of the Spielbergian style with a peculiar romanticism for authenticity, suits the franchise better than De Palma and Woo, basically turning Hunt into a kind of James Bond type for the 21st Century.

Signaling such sentiments, Abrams even opens the film with the sadistically monstrous villain Owen Davian (an always superb Philip Seymour Hoffman) torturing and eventually murdering someone intimately close to Ethan (Tom Cruise). The next moment, the woman is revealed as his fiancée Julia (Michelle Monaghan), making the previous sequence all the more heartbreaking, but then, Abrams immediately turns the screw tighter with a rescue mission gone bad in Berlin and featuring a cameo role by Keri Russell from the director's TV series Felicity. To this movie-fan, the Mission: Impossible films are a great deal of fun, the sort of cinematic blockbuster spectacle mixed with some level of smarts, and the way I see it, M:i:III marks an important turning point in the franchise. Whereas the first two entries were about accomplishing high-stakes missions while performing outlandish feats of daredevilism, this next chapter adds an emotional element that grounds the series as the Ethan Hunt saga to save his loved ones as well as the world. 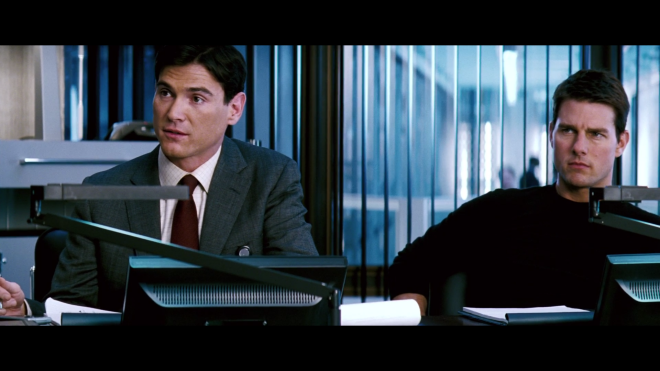 Paramount Home Entertainment brings Mission: Impossible III to 4K Ultra HD Blu-ray as a three-disc combo pack with an UltraViolet Digital Copy, which can be redeemed via ParamountMovies.com, allowing owners to watch a 1080p HD copy with Dolby Digital Audio. However, iTunes and VUDU users can unlock 4K streaming rights with Dolby Vision and Dolby Digital Plus 5.1. The dual-layered UHD66 disc and Region Free, BD50 copy sit comfortably on opposite sides of a center spindle while another Region Free, BD25 disc containing the bonus features is on the last panel. All three are housed inside a black, eco-elite case with a glossy slipcover.  At startup, viewers are taken directly to a static screen with the usual selection along the bottom and music playing in the background.

Ethan Hunt takes his hunt for dangerously sadistic arms-dealers into the super-secretive underground world of Ultra HD with a great-looking HEVC H.265 encode, delivering a nice, welcomed picture that feels reminiscent of watching the spy actioner again in cinemas.

Shot on traditional 35mm film and Sony's CineAlta HD camera for a couple sequences, which was later mastered to a 2K digital intermediate, this 2160p rendering shows plenty of sharp definition in the clothing, the IMF offices and the various buildings, with the Vatican moments looking particularly detailed. However, there are a few areas that are slightly less-than-satisfying where resolution levels noticeably drop while a smidge of noise intrudes on the fast-paced action and very mild aliasing distracts along the sharpest edges. Curiously, there are also times when the faces of the cast look suspiciously a tad waxy, but it's not clear if any of this is due to the original cinematography, the source or zealous digital manipulation. Thankfully, it's nothing too egregious because, on the whole, the transfer is a step-up over its Blu-ray counterpart.

Brightness levels enjoy a generous boost as well, providing the 4K video with deep, lush blacks and rich, penetrating shadows. In many scenes, viewers can cleanly distinguish the belts and straps from other parts of the clothing and plainly make out the objects in the background. However, there are also many times when that same information tends to disappear into the darkest corners of the frame or crush seems to rear its ugly head. The opening rescue mission in Berlin is a primary example, but there are a few others.

On the flip side, contrast is right on point and significantly brighter, providing the 2.40:1 image with clean, brilliantly radiant whites that give certain scenes a lovely picturesque feel, such as the Chesapeake Bay Bridge attack. In fact, the fluffy clouds in that scene are crisp and resplendent while still revealing every line and puff, looking like large cotton balls against a glorious blue sky. Likewise, specular highlights furnish an intense, gleaming glow to various light sources, sparks flying in every direction, explosions and the edges of metallic objects while also exposing the finer details within the hottest spots.

The overall palette is arguably not as radical, but it nonetheless receives a noticeable improvement from its HD SDR counterpart. The Dolby Vision HDR presentation displays a fuller, richer variety of blues and greens, thanks in large part to Dan Mindel's teal-orange cinematography, from the glow of the computer monitors and the various lights to the electrical sparks and coldly sterile IMF offices. In the Vatican City scene, Maggie Q's tight-fitting dress has a more candy rose pop that looks stunning against her tiger orange Lamborghini while explosions energize the screen with a distinctly sizzling orange-red splendor that still shows the finest detail in each plume. Secondary hues are, perhaps, not as dramatic or varied, but they still come with a vividly saturated glow while faces show a rosier, more lifelike complexion. (Video Rating: 82/100)

Once more, Paramount corrects a tactical error from twelve years ago, finally upgrading the audio of the second sequel from a legacy lossy soundtrack to a new lossless Dolby TrueHD 5.1 option. And the upgrade is freaking fantastic, filling the entire screen with a variety of noises and commotion in the background, generating a highly engaging and beautifully broad soundscape. Those same effects flawlessly and discretely pan into the sides and rears, terrifically extending the soundfield and enveloping the listener with the mayhem of debris falling everywhere, bullets whizzing all around or helicopters flying convincingly overhead. Even quieter, more dialogue-driven sequences come with a few well-placed atmospherics that are a bit subtler but are nonetheless effective and satisfying.

Meanwhile, Michael Giacchino's score spreads across the entire soundstage and lightly bleeds into the other speakers, displaying a wide and welcoming wall of sound with excellent balance and movement between three front channels. An extensive mid-range feels dynamic and sharply detailed in the upper frequencies, providing the loudest, action-packed segments with plenty of clarity and distinction. Vocals are also exceptional, delivering superb intonation in Cruise's incredibly emotional pleas as oppose to Hoffman's coldly stern, psychotic performance. The low-end is arguably about the same as its lossy counterpart, but there are times when bass feels a tad more commanding with a weightier oomph, especially during scenes with massive explosions, making this the preferred method of enjoying the third installment of the franchise. (Audio Rating: 95/100)

After making a successful impact in television, J. J. Abrams transfers his unique eye for thrilling cinematic spectacle and makes his feature-length directorial debut in Mission: Impossible III. This third installment is the turning point in the action espionage franchise where Abrams and his team ground the series with a personally emotional element that was more hinted at in the previous two entries, turning it, more or less, into the Ethan Hunt saga that has continued with each subsequent installment. Paramount Pictures brings the film to 4K Ultra HD with a lovely Dolby Vision HDR presentation that offers a welcomed improvement over the Blu-ray and a new Dolby TrueHD 5.1 soundtrack that leaves its legacy lossy counterpart in the dust. With the same set supplements ported over previous editions, the overall package is recommended for fans of the franchise and those hungry for more HDR goodness.