Christopher McQuarrie and Tom Cruise reunite for Mission: Impossible – Rogue Nation, the fifth installment in the action-espionage franchise, delivering the same level of engaging smarts and popcorn thrills as its predecessors. The fourth sequel fights world domination on 4K Ultra HD with a gorgeous Dolby Vision presentation, a near-reference Dolby Atmos soundtrack and ports over the same set of supplements, making the overall package a Recommended temptation for all.

(Written by Michael S. Palmer for the original Blu-ray.)

Twenty to thirty years ago, movie franchises were a much different ballgame. Outside of a few blockbuster trilogies and the James Bond films, franchises plodded along, making cheaper and cheaper sequels with diminishing box office returns.

Fast forward to 2015 and the third highest grossing movie of all time is the fourth Jurassic Park film, while the seventh Fast and the Furious movie made over a billion dollars, every studio in Hollywood is trying to launch its own cinematic universe, and the seventh Star Wars might just be the biggest movie of all time. In a way, we're living in an era where movie studios are making really expensive TV series over the course of several years (or decades).

The Mission: Impossible franchise is an interesting one. While the star remains the same, each entry has seen a new director with his own sense of tone and visual flourishes. The first two are, effectively, standalone entries, while parts three through five have attempted to infuse more of an emotional core (Ethan Hunt's romantic entanglements as well as his friendships).

Rogue Nation picks up shortly after the events of Ghost Protocol. The IMF may have saved the world, but CIA Director Alan Hunley (Alec Baldwin) sees the IMF as an outdated threat to national security and convinces the Senate to shutter the impossible mission agency and fold its assets into the CIA.

Ethan Hunt (Tom Cruise) refuses the order to come in out of the field; instead, he is hell-bent on discovering the truth behind The Syndicate, which is best described as an anti-IMF, or the titular Rogue Nation. His only clues: the face of a mysterious man (Sam Harris) clad in horn-rimmed glasses, and a beautiful-but-fierce mystery woman (Rebecca Ferguson) who saved Ethan's life and may or may not be a double agent.

Ultimately, to find the truth and take down The Syndicate, Hunt and his IMF colleagues (Ving Rhames, Jeremy Renner, and Simon Pegg) must all go rogue and play an intricate game of cat n' mouse with the CIA, British Intelligence, and The Syndicate. 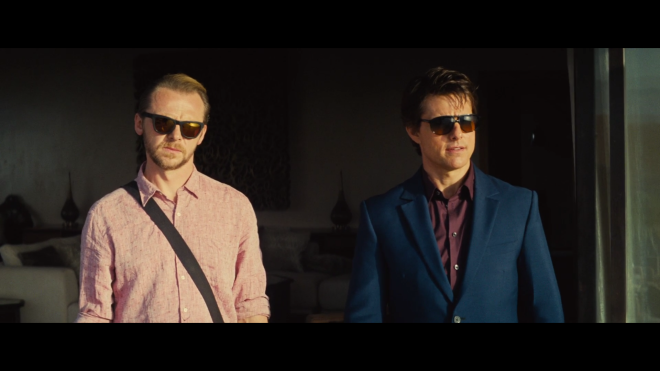 It's been a while since we've had competing-premise films — your Armageddon vs Deep Impact — from rival studios, but I think it's safe to say 2015 is the year of the super-agent going rogue after his agency is shuttered to uncover the truth behind a shadowy enemy agency. For my two pennies, I enjoyed Rogue Nation more than the still-in-cinemas Spectre. Heck, even the subversive Kingsman has an element of this.

Mission: Impossible film premises, which often involve Ethan Hunt going rogue in the search for a MacGuffin, are always the least interesting part. Perhaps I've simply seen too many Bourne and Bond films as well as '70s thrillers. What matters to me more are Ethan Hunt's interpersonal relationships and, of course, the action set-pieces. That sensation of turning down the lights and going on a globe-trotting thrill ride.

In those departments, Rogue Nation delivers on every level. Tom Cruise is a dynamic presence. His dedication to performance and physicality are second to none. Hunt's team relationship humanizes him and offers strong bits of tension-releasing comedy. And franchise newcomer Rebecca Ferguson absolutely nails it as Hunt's equal, Ilsa Faust. The pair have strong chemistry, and she goes toe-to-toe with his physicality; I hope her character returns for future entries.

Then there are the stunt and action set-pieces. While nothing may top seeing Tom Cruise sliding across the face of the Burj Khalifa in Ghost Protocol, Rogue Nation offers up numerous signature sequences, including the heavily advertised plane stunt, a riveting underwater dive, a motorcycle / car chase shot at real speeds, and a magnificent sequence where Hunt needs to thwart an assassination attempt while backstage at the opera (an excellent homage to The Man Who Knew Too Much). In fact, thriller and spy genre aficionados will love all the easter eggs and callbacks to classic movies as well as earlier franchise entries.

If you've enjoyed any of the Mission: Impossible movies — particularly M:i:III and Ghost Protocol — Rogue Nation offers up more thrilling action, fun twists and turns, globe-trotting, strong character interplay, and a clever sense of humor. I enjoyed this entry and look forward to seeing where the series goes.

Keep up with the rest of the Mission: Impossible series on 4K Ultra HD:

Paramount Home Entertainment brings Mission: Impossible — Rogue Nation to 4K Ultra HD Blu-ray as a three-disc combo pack with an UltraViolet Digital Copy, which should unlock a 4K UHD digital copy on services like iTunes and Vudu, but as of this writing, we can't yet confirm. The dual-layered UHD66 disc and Region Free, BD50 copy sit comfortably on opposite sides of a center spindle while another Region Free, BD25 disc containing the bonus features is on the last panel. All three are housed inside a black, eco-elite case with a glossy slipcover.  At startup, viewers are taken directly to a static screen with the usual selection along the bottom and music playing in the background.

Once again disavowed, disbanded and ultimately branded as fugitives, rogue IMF agents prove they're not relics of a bygone era in the covert world of Ultra HD thanks to a magnificently marvelous HEVC H.265 encode.

The biggest and best improvement over its HD SDR predecessor are the enhanced contrast and brightness levels, which maintain exceptional clarity and balance in every scene. The photography is engulfed in crisp, dazzling whites that give certain vehicles and clothing a generous pop while the fluffy, cotton-like clouds appear resplendent against a picturesque blue sky. Exceptional specular highlights wash the edges of buildings and various metallic areas with a realistic sparkle and glimmer, exposing the finest line and detail in cloudy, downcast skies of London and within the hottest, brightest spots. Darker sequences, of which there are many, are bathed in rich, velvety blacks that show superb gradational differences between the various shades and preserve excellent visibility within the murkiest, most penetrating shadows, providing the 2.40:1 image with strong dimensionality and a lovely cinematic quality. Best scenes for appreciating this splendid balance are the torture chamber where Ethan first meets Ilsa and the high-speed chase through Morocco.

The 4K presentation further seduces 1080p loyalists with a splendid uptick in overall definition and resolution. Granted, it's not a massive, night-and-day jump from its already demo-worthy Blu-ray counterpart, but the difference is notable, revealing sharper, cleaner lines along the walls of buildings, the lettering of various signs and screens, and other assorted gadgets and trinkets decorating rooms. Shot on a combination of traditional 35mm and digital cameras capable of 3.5K and 6K — the elements were later mastered to a 2K digital intermediate — the picture remains highly detailed even during the fast-paced action sequences, such as the motorcycle race on the Moroccan highway. There is the occasional small dip in resolution and mild aliasing along the sharpest edges, but in the end, awash with a fine layer of natural grain for a majority of the runtime, the 2160p transfer looks splendid with a lovely film-like appeal.

The Dolby Vision HDR presentation also shows a wide, richly-saturated array of colors with primaries, in particular, looking fuller and beaming with life. Even though much of the palette feels somewhat limited by Robert Elswit's stylized teal-orange cinematography, the scenes in Vienna and Morocco are brimming with a sumptuous display of deep rose reds, vibrant oranges and tawny browns in the buildings, the stage production of the opera and in the costumes of the actors and the Moroccan locals. Arguably, most impressive is noting distinct differences between Ilsa's canary yellow dress, the golden butter shade of the drapes hanging on the opera stage and the warm dandelion hue of the lighting in many interior scenes. Meanwhile, the CIA offices are immersed in cold, steely cerulean blues, Morocco is bathed in sultry, amber earth tones, and facial complexions come with a lifelike rosy-peach texture that feels healthy and accurate. (Video Rating: 92/100)

The fight to reinstate the IMF reaches the shores of 4K Ultra HD with the same Dolby Atmos soundtrack enjoyed on the standard Blu-ray release. A majority of the atmospheric effects occupy the surrounds effectively, doing an excellent job of breathing life into quieter, more dialogue-driven scenes, such as Ilsa's meeting with Solomon Lane in London, and nicely expanding the soundfield during the thrilling, fast-paced action sequences. Some of that activity occasionally moves into the overheads with great directionality and fluid panning, but they are sadly far and few in between. However, the lossless design's greatest strength is within the front soundstage, exhibiting an extensive and detailed mid-range. Along with well-prioritized vocals throughout, the track delivers a gratifying low-end that occasionally impresses with a palpable impact in the explosions or a wall-rattling rumble with the airplane in Minsk and the underwater chamber in Morocco. (Audio Rating: 86/100)

In Mission: Impossible – Rogue Nation, the fifth installment in the action espionage franchise, filmmaker Christopher McQuarrie picks up a short time after the events of Ghost Protocol and continues to expand on Ethan Hunt's saga against highly-capable terrorist organizations. Reuniting with Tom Cruise, who reprises his role as the emotionally-driven super-secret agent, the film is an excellent blend of classic spy thrillers with modern tech-focused actioners, delivering terrifically gratifying popcorn entertainment. The fourth sequel infiltrates 4K Ultra HD Blu-ray with a gorgeous, often-stunning Dolby Vision presentation that surpasses its HD SDR predecessor and is sure to seduce Blu-ray owners with switching allegiances. Porting over the same outstanding Dolby Atmos soundtrack and assortment of bonus features as before, the overall package is recommended for fans of the franchise and UHD enthusiasts hungry for more HDR goodness.