With Brad Bird at the helm, Mission: Impossible — Ghost Protocol, the fourth chapter in the Ethan Hunt saga, continues the thrills and excitement with another smart and engaging plot that features various death-defying, devil-may-care stunts. The 4K Ultra HD Blu-ray is equipped with a gorgeous, often-stunning Dolby Vision HDR presentation as well as the same reference-quality Dolby TrueHD 7.1 soundtrack and supplements from the original Blu-ray. The overall package remains Recommended for fans of the series and those hungry for more HDR goodness.

(Written by Michael S. Palmer for the original Blu-ray.)

The fourth installment in the Mission: Impossible franchise finds secret agent Ethan Hunt (Tom Cruise) and his team framed for a Kremlin terrorist bombing. Disavowed by their country and with no IMF agency support, Ethan and his team (Jeremy Renner, Simon Pegg, and Paula Patton) must find the real terrorists before the next attack in order to save the world and clear their names. But in the spy world, all double agents have secrets, and Ethan might not be able to fully trust the only people who can possibly save him.

Mission: Impossible – Ghost Protocol is a fun, energetic movie (perhaps the series' best, but that will be an individual preference). It begins with a smart script by Josh Appelbaum and André Nemec, who have decided to ground the film emotionally in Ethan's reaction to the loss of his wife. Another smart move is the idea of restricting access to all the high-tech gadgets. They're still here but seem to break more often and things we expect (like the masks) don't work at all, leaving our heroes to face greater obstacles than in previous installments. Ethan and team feel (a little) less like superheroes and more like real people. Further, Tom Cruise's performance proves he's still got his dramatic and action chops. The trio of Pegg, Patton and Renner are also well drawn, each suffering from a thematic loss in line with Ethan Hunt.

Also, let's talk about director Brad Bird making his live-action debut. It's no surprise that the man who brought us The Iron Giant, Ratatouille and The Incredibles makes such a strong transition between filmmaking mediums. We can assume he, along with producer Tom Cruise, had a heavy hand in the story and characters, but what I loved most about the film was its gripping action sequences. They grab the audience by the heart, ramp up the tension, and never let go. This movie is a master class in the setups and payoffs necessary to make action visually coherent and suspenseful. 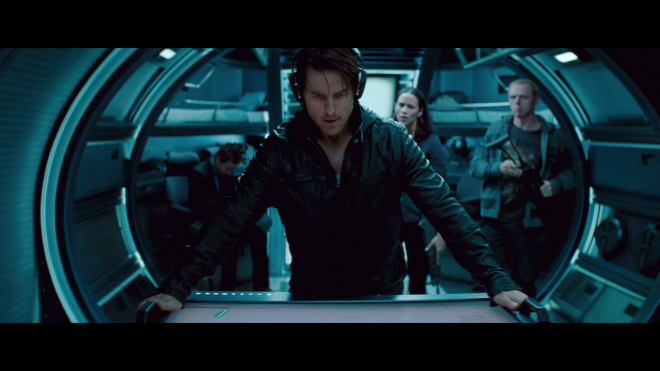 I enjoyed the film so much, I only have a couple minor complaints. Some might argue film franchises are better when they continue one long story, while others might say they should be standalone. For me, because I hadn't seen M:i:III in a while, I couldn't quite remember all the emotional details previously set up in the other film. I wish, like reading sequel books, a little more time had been given to reminding us about the world. This may sound at odds with my compliments above, so let me be clear: the movie works well, but if you haven't seen the third film (at all or in some time), you might find yourself slightly distracted wondering what the characters are talking about. For the most emotionally fulfilling experience, perhaps it's best to watch M:i:III and Ghost Protocol back to back.

For my last nitpick: while the film's CGI is generally impressive (and probably used a lot more than I realize), sandstorms and a few of the explosions still look a little cartoonish.

Keep up with the rest of the Mission: Impossible series on 4K Ultra HD:

Paramount Home Entertainment brings Mission: Impossible — Ghost Protocol to 4K Ultra HD Blu-ray as a three-disc combo pack with an UltraViolet Digital Copy, which unlocks a 4K UHD digital copy on services like iTunes and Vudu. The dual-layered UHD66 disc and Region Free, BD50 copy sit comfortably on opposite sides of a center spindle while another Region Free, BD25 disc containing the bonus features is on the last panel. All three are housed inside a black, eco-elite case with a glossy slipcover.  At startup, viewers are taken directly to a static screen with the usual selection along the bottom and music playing in the background.

The last remaining team of the disbanded IMF agency takes their fight against nuclear war to 4K Ultra HD Blu-ray with a splendid, often-stunning HEVC H.265 encode that notably offers better contrast and brightness almost immediately in the opening Moscow prison scene. Whites are resplendent and brilliantly crisp, making the few clean areas of the pockmark-riddled walls pop while the flood lights shine with luminous intensity. Specular highlights, not only here but throughout the entire runtime, radiate with a tight, narrow glow, revealing a tad more detailing within the hottest, brightest spots while also providing the edges of metal objects or the tops of buildings with realistic shimmer. Silky, inky-rich blacks display distinct variations between the various shades, exposing clear differences in Ethan's all-black outfit during the Dubai skyscraper scene. Meanwhile, luxurious, stygian shadows penetrate deep into the screen without sacrificing the finer aspects, providing the 2.40:1 image with noticeable dimensionality and a lovely cinematic quality.

Equipped with a Dolby Vision HDR processing, the 4K presentation is also awash in a sumptuous array of colors, energizing Robert Elswit's teal-orange cinematography with a great deal of vitality and animation. Much of the picture is awash with a cold steely hue during many of the daylight sequences, most notably in the Moscow prison and the Dubai skyscraper scenes, while making computer monitors shine in a glow of electrifying blues and vivid greens. The yellow tops of the Kremlin glimmer in the sunlight with a true-to-life golden sparkle, and the brick walls come in a deep garnet shade while the carpet at the Archive Room has a cheerful candy pop. The most dramatic and arguably best scene is the fancy dinner party in Mumbai where the screen is showered with outfits in a wide assortment of colors. From the bright crimson reds of turbans, the passionate oranges of marigold and other flowers to the golden yellows of the fringes decorating the dresses and pillars and the rapturous sapphire teals of the super-cool BMW car.

Originally shot on a combination of traditional 35mm and 65mm film for some IMAX sequences, which was later mastered in a 4K digital intermediate, overall definition and resolution also enjoy a welcomed and noteworthy step-up over its Blu-ray counterpart. There is definitely better clarity of the background information, particularly in the darker nighttime sequences, such as Ethan's escape from the Moscow hospital and his stroll through the streets to meet the Secretary. The individual bricks and cobblestones at the Kremlin and the threading and stitching of the clothing are all razor-sharp, and the tiniest objects decorating the various rooms throughout are plainly visible. However, there are few, worth-pointing-out instances of very mild aliasing and moments of poor resolution, such as the aforementioned dinner party in Mumbai. Thanks to the HDR processing and wider color gamut, explosions are more distinct and clear, showing every bit of debris flying through the air and every line in the fluffy puffs of the rising plumes. Awash with a fine layer of natural grain, the 4K Dolby Vision presentation is a beautiful improvement with an appreciable film-like appeal and healthy, lifelike complexions in the entire cast. (Video Rating: 94/100)

Disavowed IMF agents race against the clock with the same Dolby TrueHD 7.1 soundtrack enjoyed on the Blu-ray, and while an object-based audio option would have been a much-welcomed upgrade, this track remains a pure reference-quality aural experience sure to give anyone's home theater system a nice workout. This lossless mix terrifically envelopes the listener with a splendid array of action and atmospherics in the surrounds, filling the room with the bustle of the various cities, the ringing echoes of gunfire, the chatter of the crowd in a dinner party accompanied by music, and the disastrous noise of individual grains of sand during a sandstorm, each of these revealing exceptional clarity and detailing in the mid-range. These action-packed moments come alive when applying the receivers' Dolby Surround or DTS: Neural:X up-mixing functionality, effortlessly spreading many of those atmospherics into the overheads. But the best part of the design is a vigorously potent and robust low-end, energizing the room with a sweeping, ultra-low rumble during the Kremlin explosion and the Dubai sandstorm while providing every gunshot and Michael Giacchino's score a weighty presence. (Audio Rating: 95/100)

Bringing his particular brand of animated thrills and exhilarating action, Brad Bird injects Mission: Impossible — Ghost Protocol with some complementary comic-relief and a larger sense of fun to a deadly serious but highly-engaging plot about preventing nuclear war. Reprising the role that essentially reignited his A-list career, Tom Cruise stars in the fourth chapter of the Ethan Hunt saga while still haunted by the repercussions of the previous installments, and he is joined this time by a larger ensemble cast. The disbanded IMF agents team up once more and race against the clock on 4K Ultra HD with a gorgeous, often-stunning Dolby Vision HDR presentation that bests its HD SDR counterpart and ports over the same reference-quality Dolby TrueHD 7.1 soundtrack. Featuring the same set of bonus features as the previous Blu-ray edition, the overall package is nonetheless recommended for fans and UHD collectors.