Delivering bigger stunts, bigger chase sequences, and bigger explosions, John Woo brings his brand of highly-romanticized, operatic explosive action to the next chapter in the Mission: Impossible series. The sequel saves 4K Ultra HD with a fantastic Dolby Vision HDR presentation and an excellent Dolby TrueHD soundtrack while porting over the same set of supplements, making the overall package Recommended.

Just one of several reasons for loving and enjoying Mission: Impossible II (aka, M:I-2) is the involvement of Hong Kong filmmaker John Woo. In the late 90s and into the early 2000s, his name alone was enough to stir interest in the latest big-budget, high-concept blockbuster. The director of Hard Boiled, Broken Arrow, and Face/Off is known for his fantastically stylized, slow-motion action sequences often accompanied by Mexican standoffs and kept busy with lots of other background activity, most notably doves suddenly interrupting the tension between the hero and villain. It's become not only a familiar staple of his films but also a near-comical cliché, and it's this particular brand of fancifully inspired visuals he brings to the next chapter of the Mission: Impossible series — and I love it! The first movie already established over-the-top action as not only permissible but encouraged, so Woo raises the stakes in this sequel, littering the screen with vividly dreamy and highly-romanticized visuals that are weirdly mesmerizing and beautiful to watch.

Rather than laugh at the silliness and the absurdity of seeing the impossible performed on screen, audiences are more spellbound and hypnotized by Woo's wild creativity — one that is as madcap and preposterous as it is passionately animated and practically poetic. The plot about rogue IMF agent Sean Ambrose (Dougray Scott) venturing to profit from a new bioweapon called Chimera and its cure Bellerophon almost becomes a moot side note, a pretext for all the explosive, gun-toting beauty on display. When Tom Cruise's Ethan Hunt tries to recruit Ambrose's ex-girlfriend, Nyah (Thandie Newton), the two share a rhythmic verbal interplay that extends into a car chase the next day, a vehicular ballet that recalls the flamenco dance of the previous night. Our hero flips through the air while firing his gun, the bad guy always seems one step ahead, and the two eventually duel it out on motorcycles as if they were horses and the guns as swords. It's not as engaging as its predecessor story-wise, but it's a great deal of brainless fun. 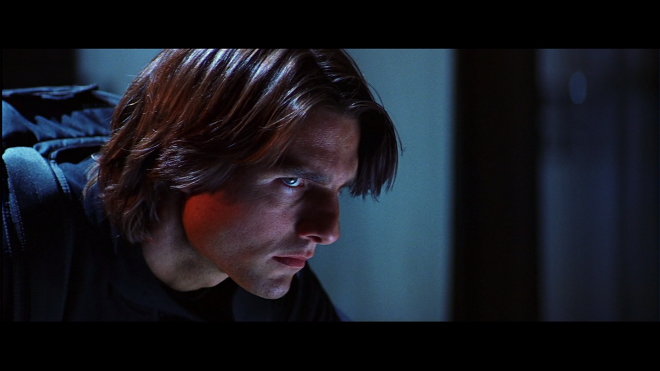 Paramount Home Entertainment brings Mission: Impossible II to 4K Ultra HD Blu-ray as a two-disc combo pack with an UltraViolet Digital Copy, which can be redeemed via ParamountMovies.com, allowing owners to watch a 1080p HD copy with Dolby Digital Audio. However, iTunes and VUDU users can unlock 4K streaming rights with Dolby Vision and Dolby Digital Plus 5.1. The dual-layered UHD66 and Region-Free BD50 discs sit on opposing panels of a black, eco-vortex case with glossy slipcover. At startup, viewers are taken directly to a static screen with the usual selection along the bottom and music playing in the background.

Woo's volatile sequel ignites Ultra HD with a fantastic HEVC H.265 encode, offering a welcomed improvement over its Blu-ray counterpart. It's not a night-and-day difference, but the frenzied spy actioner enjoys a notable face-lift fans will surely admire. There are the occasional soft, blurry sequences, likely related to the condition of the source and the original cinematography, but on the whole, the 2160p transfer provides a highly-detailed picture that reveals pores, wrinkles and negligible blemishes in the entire cast, especially during the many close-ups. Individual hairs are sharp, every crease in the leather jackets are distinct, and viewers can plainly make out the smallest feature and object in the background. Speaking of which, the Dolby Vision video offers better brightness levels, showering the 2.35:1 image with rich, silky blacks and excellent gradational differences between the various shades. Delineation in poorly-lit moments and within the darkest corners is excellent, except for some very mild crush in a couple scenes, and an ultra-fine layer of natural grain remains intact, providing the picture with an appreciable cinematic quality.

The 4K presentation also comes with an improved, brighter contrast overall, giving the explosive action a great deal of pop and bursting with a lustrous vigor that makes every set piece truly come alive. Whites are crisp and beaming with a vivid intensity that doesn't bloom while making the fluffy clouds in the sky glisten realistically in the sun, and specular highlights provide a narrow, tight radiance along the edges of various surfaces, metallic objects and within the brightest, hottest spots, such as headlights and any scene with fire. In fact, thanks to Dolby Vision HDR, those same moments with fire appear far more detailed, distinctly separating the fiery oranges, passionate reds and glowing yellows within the plumes of every explosion. Greens are livelier while blues are more energetic, and secondary hues display a bit more variety throughout with the scenes in Spain when Ethan learns the details of his mission and in the end when Ethan and Nyah walk away through a waterfront park in Sydney.

All in all, it's a lovely 4K Dolby Vision presentation that'll make fans happy to upgrade their previous Blu-ray. (Video Rating: 84/100)

As with the first movie, fans of the franchise have disapproved of Paramount's decision to release the films on Blu-ray with legacy lossy audio, but on Ultra HD, the studio has rightly corrected this error by equipping the sequel with an awesome Dolby TrueHD 5.1 soundtrack that fantastically energizes the entire room.

The opening rock-climbing scene as a daredevil Ethan listens to music on his earbuds has been a personal favorite because I like how desert silence is slowly broken by Zap Mama's "Iko-Iko" until it completely overwhelms. Meanwhile, other atmospherics, such as the call of a distant hawk, are heard in the distance and everything is interrupted by the loud blades of a helicopter smoothly moving from the sides and into view. Action sequences are littered with excellent directionality and flawless panning effects, showering the room with the chaotic noise of bullets flying everywhere, debris going in every which direction and helicopters flying overhead. It's not always consistent, but it's enveloping and satisfying when it's done.

The soundstage feels broad and spacious as various background activity fills the left and right channels with superb balance and convincing off-screen movement. There are a couple times when the mid-range seems as though a bit too hard in the upper frequencies, but overall, the lossless mix maintains great clarity and detailing during the loudest segments. Dialogue is well-prioritized and intelligible. The low-end is arguably not as commanding or responsive as I would have liked, leaving gunshots feeling somewhat wanting, but bass delivers a throaty, weighty presence to every explosion, making this a welcomed upgrade for fans. (Audio Rating: 88/100)

With John Woo at the helm, Mission: Impossible II does exactly what is expected of a sequel, delivering bigger stunts, bigger chase sequences and bigger explosions. The follow-up is not quite as engaging as the Brian De Palma and Tom Cruise 1996 team-up in terms of the story, but Woo's creative, highly-romanticized brand of explosive action is enough to kept audiences entertained as the plot crescendos to a heavily-stylized, operatic finale. The volatile, explosive sequel saves the world on 4K Ultra HD, equipped with a fantastic Dolby Vision HDR presentation that offers a notable improvement and an excellent Dolby TrueHD soundtrack that corrects a complaint made of previous Blu-ray editions. Porting over the same set of supplements as before, the overall package is ultimately recommended for fans of the franchise.

Sale Price 21.99
List Price 25.99
Buy Now
3rd Party 18.99
In Stock.
See what people are saying about this story or others
See Comments in Forum
Previous Next
Pre-Orders
Tomorrow's latest releases