Tom Cruise reprises his role as the somber secret agent Ethan Hunt in Mission: Impossible – Fallout. Writer/director Christopher McQuarrie focuses the plot on fighting The Syndicate terrorist organization as much as on Ethan Hunt's personal journey, making this the best installment in the series. The 4K Ultra HD Blu-ray arrives with a gorgeous Dolby Vision HDR presentation, a reference-quality Dolby Atmos soundtrack, and a healthy collection of supplements. The overall package is Highly Recommended. (We have also reviewed the Blu-ray HERE.) 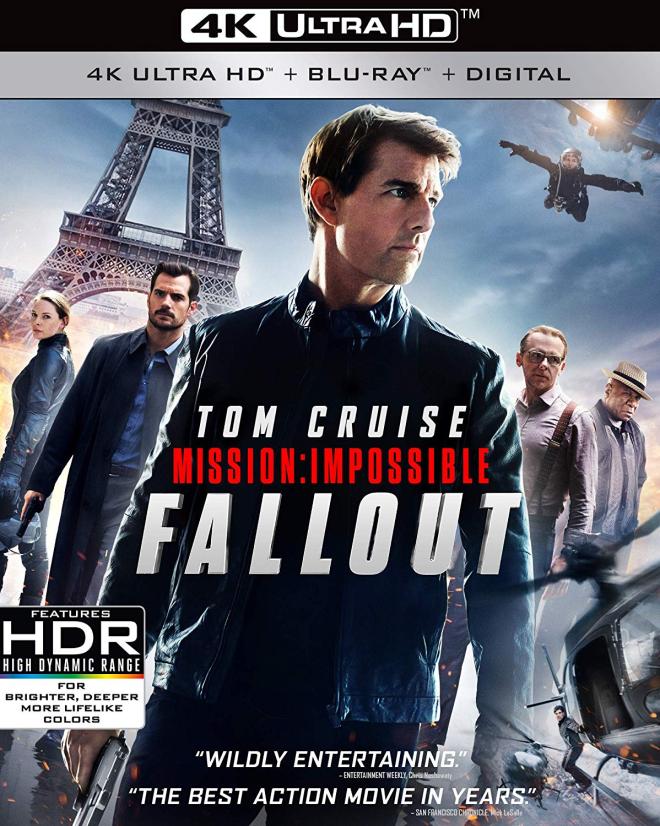 Without giving away too much, Christopher McQuarrie's Mission: Impossible – Fallout essentially brings the Ethan Hunt saga full circle, connecting all the entries in the franchise into one continuous storyline about a man haunted by a past full of remorse and choices that only lead to more of the same. Tom Cruise reprises his role once more as the highly-elite covert operative with a notably weightier and somber demeanor than in the previous movies — and it's not only due to the burden and strain of having to save a good portion of Earth's population this time around. Audiences have seen the character grow and evolve for the last twenty years, especially since J.J. Abrams' involvement in the 2006 third installment. As Henry Cavill's CIA assassin August Walker so succinctly summarizes for us, Hunt has been betrayed, disavowed and cast aside by his own government many times, sacrificing a great deal of his own personal happiness for little in return. By this point in his career where he is reminded of that sacrifice, our hero seems constantly teetering on the edge of breaking.

It's this weight and clout hanging over Hunt's head that particularly and most impressively affects this sixth chapter to the series. The title Fallout is not only in reference to the possible devastation caused by notorious rogue agent Solomon Lane's (Sean Harris) twisted aspirations, but it is also suggestive of something a bit more gut-wrenching and personal. At the core of McQuarrie's script, who also penned Rogue Nation as well as The Usual Suspects, Jack Reacher and Edge of Tomorrow, we are witness to the aftermath of choices made throughout the years finally accruing and encumbering our hero's current state. Aside from one sensationally jaw-dropping, daredevil stunt to the next, the plot progresses by Hunt gripped in situations where he's forced to make choices. In fact, action sequences are even the result of these choices — a constant cause and effect dilemma. And Hunt is continuously caught in a plight of deciding the value of one life versus many, a personal sense of morality that's guided him here and made him the IMF agent he is now. 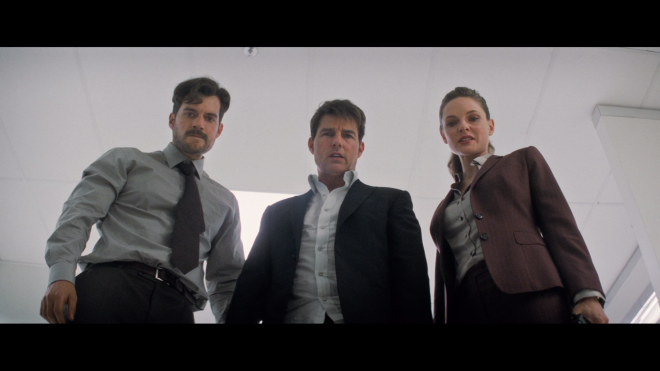 Standing in for the opposing side of this philosophical quandary is Solomon Lane, the anarchist leader of the terrorist organization The Syndicate, and his mysterious militant follower John Lark, who views the death of many for the greater good as just — a repeated sentiment from a manifesto he wrote reminding us of the film's central theme. Lane and Lark participate in a vast network of highly fascinating and complex villain archetypes with a loaded sense of purpose, a network that's been steadily growing in the last couple of years. In Fallout, they seem smarter and more competent than our hero due to a committed, near fundamentalist faith to their cause, an unshakable devotion to an objective bred from a principled morality that's curiously relatable and morbidly logical. This adherence to achieving their goal is a bleakly problematic challenge for Hunt because how does one efficiently combat such conviction. At one point, Lane rejects, and even feels offended by, his actions being associated with terrorism, seeing violence as a tool for bettering humanity.

An even more telling comment is when Lane bluntly points out Hunt's good intentions over the years are coming back to haunt him, and McQuarrie refreshes our memories in subtly engrossing ways, sprinkling Mission: Impossible – Fallout with a medley of thinly-veiled allusions to previous installments. Arguably, the return of Ving Rhames and Simon Pegg serve as part of this since they've been with Hunt during his most taxing, death-defying trials while new choices and more reckless exploits welcome Alec Baldwin, Rebecca Ferguson, and Angela Bassett into the fold. However, the allusions come by way of the many insanely wild stunts, which feel reminiscent of similar stunts from its predecessors while also raising the stakes, almost as if to suggest Hunt's past experiences have trained him for this fight. But on a more important note, this follow-up is, at once, the best entry in the entire series, defying all expectations for a sequel, and the perfect remedy to many contemporary action flicks, favoring white-knuckle practical visuals over a dependency on CGI effects.

Paramount Home Entertainment brings Mission: Impossible — Fallout to 4K Ultra HD Blu-ray as a three-disc combo pack with a Digital Copy, which should unlock a 4K UHD digital copy on services like iTunes and Vudu, but as of this writing, we can't yet confirm. The triple-layered UHD100 disc and Region Free, BD50 copy sit comfortably on opposite sides of a center spindle while another Region Free, BD25 disc containing the bonus features is on the last panel. All three are housed inside a black, eco-elite case with a lightly-embossed slipcover, and it includes a glossy 12-page booklet with pictures and quotes from the filmmakers about the stunts. At startup, viewers are greeted by a screen with full-motion clips, the usual menu selection along the bottom and music playing in the background. 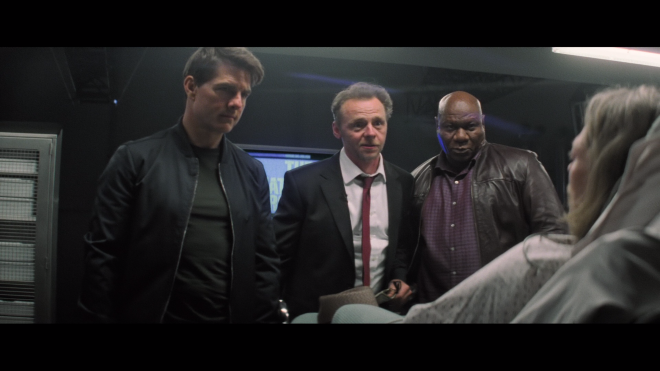 The sixth installment mounts the biggest rescue mission yet on Ultra HD, outfitted with an exceptional HEVC H.265 encode that does a slightly better job than the Blu-ray.

Shot on a combination of traditional 35mm and 8K digital cameras, which was later mastered to a 4K digital intermediate, the freshly-minted transfer enjoys a notable uptick in overall resolution. The tiniest crease and stitch in the clothing is sharper, and every unique feature of the European architecture is a bit more distinct, exposing the most minute crack, crevice, and pockmark of the walls, pillars, and streets. Each individual hair, whisker and small fuzzballs on the clothes are plainly visible and very detailed while facial complexions often expose pores, wrinkles and the most negligible blemishes with lifelike textures. On a more interesting comparison, the diffusion-filter look of Rob Hardy's stylized photography is not quite as prominent on UHD as it is on the Blu-ray. Of course, a few scenes, such as the nightclub party in Paris, still fall on the mildly softer side, but the deliberate look still maintains outstanding clarity and definition while also lightly bathed in natural film grain.

Also, from beginning to end, the 2160p video saves the day with improved, more luminance contrast, supplying the action with radiant whites and an energetic glow that makes each stunt all the more spectacular and stunning. Compared to the Blu-ray, the car chase through the Parisian streets are vibrantly striking and eye-catching. Unfortunately, specular highlights are not really any more dramatic or intense, with a couple instances of very mild blooming from some light fixtures, likely due to the filmmakers' creative intentions. But on the whole, the brightest areas are fairly tight with strong detailing while giving metallic surfaces a realistic shiny gleam. Interestingly, the cinematography doesn't affect brightness levels like before. In fact, blacks are significantly richer and more luxurious with a velvety gloss in hairdos, a swarthy ebony polish in vehicles and silky, inky shadows that penetrate deep into the screen, providing appreciable dimensionality and a gorgeous cinematic appeal. In the Paris nightclub scene, the bathroom fight offers excellent demo-worthy material.

Furthermore, Hardy's creative cinematography also enjoys another unmistakable upgrade, as colors are observably bolder without also seeming overemphasized or excessive. The Dolby Vision HDR presentation delivers a sumptuous array of primaries, making the cerulean blue skies glow during the many daylight exteriors. There are appreciable differences in the ruby reds of blood, the crimson radiance of lights and the candy rose in some articles of clothing. Meanwhile, the greens of the surrounding foliage are brimming with life and a lovely splendidness. Although a bit more nuanced and subtler, secondary hues and softer pastels receive a welcomed, dazzling boost, showering sunset scenes with a lovely, picturesque assortment of orangey yellows, blushing pinks and deep lavenders. Flesh tones have a more natural, reddish appeal as well as, making this UHD version better than its HD SDR counterpart and the preferred way of watching the movie.

On a side note, the presentation comes with alternating aspect ratios, switching between 2.39:1 and 1.90:1 IMAX sizes for those action sequences taking place in the sky or through mountains. Although faithful to the filmmakers' intentions, CIH enthusiasts will want to make the proper adjustments. Personally, I found the 2.20:1 aspect ratio a good comprise for enjoying the movie during these scenes. (Video Rating: 94/100) 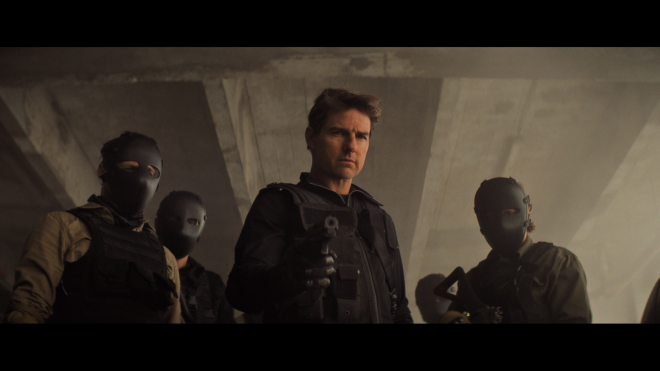 Right from the opening moments, the front soundstage feels broad and expansive, displaying lots of warmth and fidelity in Lorne Balfe's understated score. Meanwhile, various activity in the background spreads across all three channels with spotless fluidity and into the top heights, establishing a highly-engaging half-dome environ that amazingly stays consistent from beginning to end. Rich, clarity detailing within the mid-range allows for the echo of gunshots and ricochet of bullets to be heard with stunning precision, and the crunch of metal during action sequences is distinctly heard while vocals are lucid and well-prioritized over the loudest segments. A powerful and occasionally authoritative low-end provides gunfire with a tight, potent snap, collusions with a room-shaking rumble, engines with a realistic growl and explosions with an aggressively resounding boom. There are a couple instances when bass even digs into the ultra-low depths, dropping well below 20Hz  with some serious decibels, adding an incredible sense of presence to the action and music (bass chart).

Rear activity is also at a near constant, as various ambient noises during quieter, dialogue-driven moments litter the room and convincingly encircle the listening area. Whether it’s the bustling city traffic of Paris, the chatter of people in the Kashmir village and medical camp or voices echoing while characters argue underground, the surrounds are continuously employed with a variety of effects discretely moving from one channel to the next, creating an enveloping 360° environment that keeps viewers glued to their seats. Action scenes can be quite aggressive as an assortment of atmospherics smoothly journey into the ceiling channels, expanding the visuals to a grander scale. The engines of planes and the propeller blades of helicopters fill the empty space above, and the ringing of police sirens reverberate in every direction. Chase sequences, unsurprisingly, are the best moments with helicopters, cars, and motorcycles flawlessly panning overhead to generate an immersive hemispheric soundfield, making it one of the best high-resolution tracks of the year. (Audio Rating: 96/100) 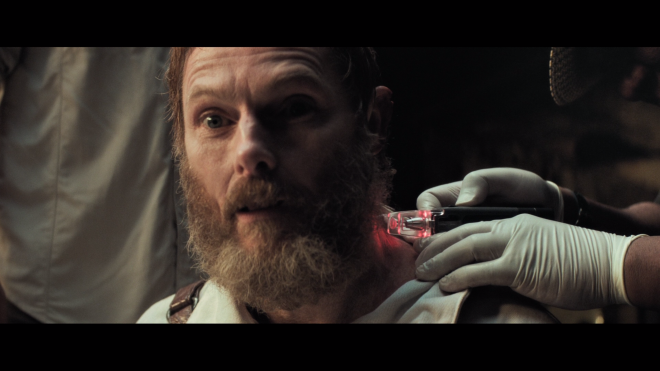 Blu-ray Disc One (The Movie) 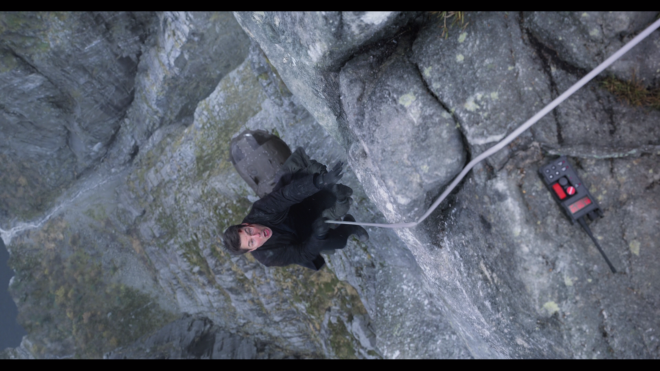 For the sixth installment of the Mission: Impossible franchise, writer/director Christopher McQuarrie essentially brings the series full circle, focusing the plot as much about fighting the terrorist organization The Syndicate as it is a personal journey for its central hero, Ethan Hunt. Tom Cruise reprises his role for Mission: Impossible – Fallout with a more somber, grave mood than its predecessors, as the events and choices of those movies noticeably take their toll on the character, making the best entry in the series yet. The movie lands on 4K Ultra HD with a gorgeous Dolby Vision HDR presentation that surpasses its HD SDR counterpart and the same fantastically immersive, reference-quality Dolby Atmos soundtrack enjoyed on the Blu-ray. With a healthy collection of supplements to boot, the overall package is highly recommended for action fans everywhere.