Based on Lee Child's 2005 novel, Christopher McQuarrie's Jack Reacher, starring Tom Cruise as the titular military veteran turned vigilante, is essentially a court drama disguised as an action thriller that keeps audiences thoroughly engaged and invested in solving the mystery. The film drifts into the town of 4K Ultra HD Blu-ray with an often-stunning Dolby Vision HDR presentation, a fantastic DTS-HD 7.1 soundtrack, and the same set of supplements as before, making the overall package Recommended for fans and UHD collectors.

(Written by Luke Hickman for the original Blu-ray.)

I try not to let actors' personal lives affect me. Say what you want about Tom Cruise, I've always found him a worthy Hollywood star. The great thing about Jack Reacher is that it blends the old Cruise style, the one that everyone used to love, with the action style that he has more recently adopted. Get ready for A Few Good Men meets Ethan Hunt.

If you remember, Paramount canceled the Jack Reacher premiere in the wake of the Sandy Hook Elementary school shooting, presumably because of the movie's opening sequence - a drawn out and highly uncomfortable scene involving a sniper taking fire on innocent and unsuspecting pedestrians in a public space. While watching a theatrical press screening just one week after Sandy Hook, this scene was almost unbearable; after the recent events in Boston, it's even more so. But if you can make it through this one hard-to-watch moment in the film, everything that follows is well worth it.

The police find the shooter, an ex-military sniper with a history of violence and psychological problems stemming from post-traumatic stress, within hours. Once arrested, the shooter won't speak. Instead, he writes down one name: Jack Reacher. "Who the hell is Jack Reacher?" is a question asked many times. Once a highly successful officer in the military police, Reacher is now an off-the-grid "drifter with nothing to lose." Why does the suspect want Reacher? Well, that's the second most asked question in the film, but you have to watch to find out. 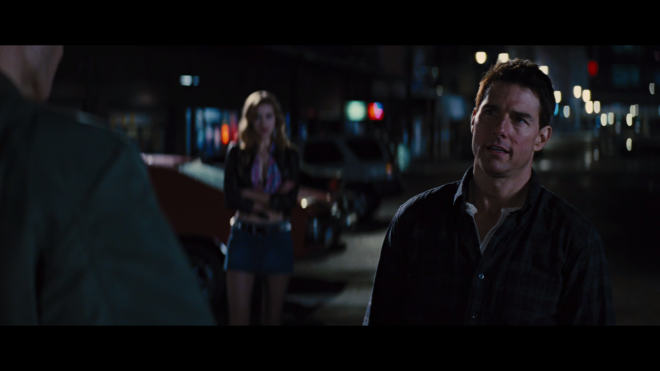 Reacher places Tom Cruise back in a role similar to his part in A Few Good Men, where he's determined to uncover a case and expose every guilty party involved. It's a detective / investigatory movie without the courtroom scenes and the limitations of his character being a lawman. Yes, the majority of it is serious, but it also has a great amount of well-placed comedy that keeps it from being too dramatic and bogged down by darkness. These moments, combined with Reacher's unpredictability, blunt violence, and unrestrained mouth, keep the film from depressing audiences with its uneasy opening.

The stylized action takes a step back from the hyper-editing that has become a genre norm. Instead of fast-cutting shots of distracting close-ups that leave the on-screen actions indiscernible, the camera is pulled back and steady; the takes are longer, allowing you to soak it all in and appreciate the well-choreographed fight sequences. Each action scene breathes a breath of rejuvenating life into the genre that has recently been on the box office decline.

I get the feeling that anyone who has ever liked Tom Cruise will enjoy Jack Reacher. It's like a mix-tape of everything good that Cruise has ever done. The movie itself even highlights this idea by tossing in elements from his old movies blended with those of his newer movies – for example, like the soon-to-be-deemed "classic" high-speed chase between a muscle car and a new performance car. His character is a quiet introspective guy who "wants to be left alone," but when his buttons are pushed, he becomes a quick-witted and mouthy antagonist, one who's very entertaining to watch. Get ready for a "Best-of" Tom Cruise that's engaging, intelligent, tense and fun.

Paramount Home Entertainment brings Jack Reacher to 4K Ultra HD Blu-ray as a two-disc combo pack with an UltraViolet Digital Copy, which unlocks a 4K UHD digital copy on services like iTunes and Vudu. The dual-layered UHD66 and Region-Free BD50 discs sit on opposing panels of a black, eco-vortex case with glossy slipcover. At startup, viewers are taken directly to a static screen with the usual selection along the bottom and music playing in the background.

A lone drifter cleans up the mean streets of a corrupted town in 4K Ultra HD Blu-ray with a gorgeous, near-reference HEVC H.265 encode that looks and feels every bit like watching the crime thriller all over again in cinemas. Originally shot on traditional 35mm film, which was later mastered to a 2K digital intermediate, the 2160p video delivers a noticeable step-up in terms of definition, revealing individual bricks and cracks on the sides of buildings even in extreme wide shots, many of which are quite stunning. Resolution is not always consistent, but on the whole, background information remains distinct in the many beautiful aerial shots of Pittsburgh's skyline and in several poorly-lit interiors of the homes. Every crease and faded crinkle in Reacher's leather jacket is detailed, every hair is razor sharp, and facial complexions come with lifelike textures that expose pores, wrinkles, and negligible blemishes. Very mild, easy-to-ignore aliasing rears its ugly head on a couple occasions, but for the most part, the 4K presentation is highly detailed and awash with a very fine layer of natural grain, giving it a beautiful film-like appearance that videophiles will love.

Most apparent and immediate is the 2.35:1 image awash in rich, silky layers of blacks, starting with the opening sequence in the basement while James Barr prepares each bullet. When we move to the parking garage and PNC Park scene, viewers can plainly distinguish the gradational differences and details in the rifle, the sniper scope and in the clothing of each character while superb shadow delineation allows for plenty of visibility within the darkest corners of the frame. It's all balanced out with by improved contrast levels, providing each scene with crisp, sharp whites throughout. Remarkably tight and narrow specular highlights maintain exceptional clarity within the hottest areas and occasionally give daylight sequences that beautiful looking-out-the-window effect. The two best moments for demoing this marvelous Dolby Vision brightness and contrast balance is Reacher's street fight with the hired thugs and the climactic shootout at the quarry where the light from various sources glistens and radiates off watery surfaces with intensity and realism.

The overall palette receives a generous boost without also feeling exaggerated or artificial thanks to the Dolby Vision processing, giving Caleb Deschanel's cinematography a lovely picturesque quality even in the grimiest, more depressing parts of town. In the midday, the sky is a glowing soft blue while the afternoons and evenings bloom with a radiant array of yellows and light pinks bleeding into magentas and a dark indigo blue. The trees and few bits of grass around the city are a lively, energetic green, but arguably, the reds are most impressive, from the richly-saturated cherry coat of the Chevy Chevelle SS to the distinctly crimson red of Sandy's work shirt and the ruby shade of her lipstick. Even in darker, nighttime scenes, the colors continue to pop with appreciable intensity, animating every action piece with a great deal of enthusiasm and vibrancy, and flesh tones come with a rosy peach hue while Herzog's villain intentionally appears pale and somewhat sickly. (Video Rating: 94/100)

The action thriller wanders unto UHD with the same DTS-HD Master Audio 7.1 soundtrack enjoyed on the standard Blu-ray edition from five years ago, and while an object-based audio option would have been a much-welcomed upgrade, this track remains the same demo-worthy aural experience as before. The room fills with the bustle and commotion of the city while a few atmospherics pan fluidly between the sides and rears, creating a nice enveloping soundfield, and the echo of gunfire reverberates all around with bullets also buzzing all around the listening area. The action-packed moments come alive when applying the receivers' Dolby Surround or DTS: Neural:X up-mixing functionality, effortlessly spreading many of those ambient effects into the overheads. But the best part of the design is a throaty and robust low-end that adds a realistic rumble to the Chevelle's grumbling engine, a sharp hefty impact to each gunshot and provides Joe Kraemer's score with a weighty presence. (Audio Rating: 88/100)

Feeling reminiscent of classic legal thrillers from the 80s and 90s, Christopher McQuarrie's Jack Reacher is essentially a traditional crime drama in the guise of a modern vigilante action thriller. Based on Lee Child's 2005 novel, the film features an excellent performance by Tom Cruise as the titular character, a skilled and highly-intelligent Army veteran turned vigilante crime fighter, and a terrifically entertaining plot sure to keep audiences thoroughly engaged and invested to solve the mystery. Reacher cleans up the mean streets of 4K Ultra HD with a gorgeous, near-reference Dolby Vision HDR presentation and the same demo-worthy DTS-HD MA 7.1 soundtrack, which will leave fans itching to upgrade. Porting over the same set of supplements as the Blu-ray edition, the overall package is recommended.