Tom Cruise stars as a brash Navy lawyer who's teamed with a gung-ho litigator in a politically-explosive murder case. Charged with defending two Marines accused of killing a fellow soldier, they are confronted with complex issues of loyalty and honor-including its most sacred code and its most formidable warrior.

…I'll let you fill in the blank with your own best Jack impression.

Some movies are eternally quotable. The lines of dialogue roll off the tongue with a natural rhyme and rhythm that anybody and their uncle can rattle off an entire scene without missing a beat - and probably in a particular actor's unique cadence. Quoting movies is half the fun of loving movies. You could be in a completely inappropriate situation and be compelled to spout out your favorite line from your favorite flick. Rob Reiner had quite the hot streak from the late 80s and into the 90s. Whether you're discussing the merits of a game of wits against a Sicilian, the importance of louder than normal stereo equipment, or the fate of your favorite romance novel character, Reiner crafted some of the best and most quotable comedies and dramas ever made. Perhaps his best and most quotable film is A Few Good Men whose classic Sorkin script gave rise to one of Jack Nicholson's fiercest performances and one of the best legal thrillers of the 90s. 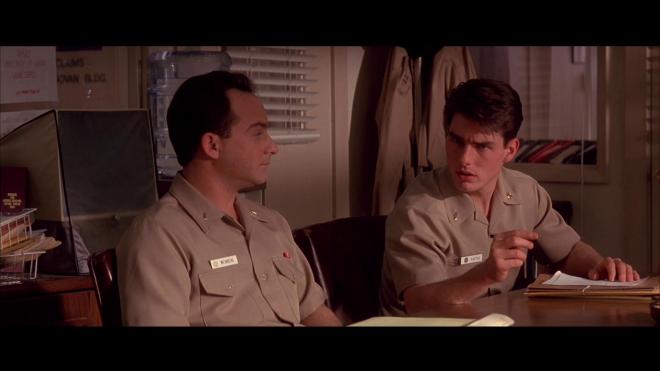 We all know this movie by now. Backward and forwards, film fans have been watching and parroting this film for 25 years - and for good reason. Before he was known for crafting America's favorite television presidential fantasy with NBC's The West Wing, Aaron Sorkin was known primarily as a fledgling playwright and screenwriter. A Few Good Men earned some solid notices when it premiered on Broadway and a film adaptation was quick to follow. For his first screen credit as a writer, Sorkin hit it out of the park. It's understandable, this is an arresting film from minute one when we witness the frighting assault on a young marine in the dark. It's a hell of a way to start a flick. Then we get to meet Tom Cruise's cocky Lt. Kaffee, Demi Moore's determined Lt. Commander Galloway, Kevin Pollak's sly Lt. Weinberg and ultimately we get to meet the fearsome Col. Nathan Jessep so iconically played by Jack Nicholson that you can't imagine anyone else in the role.

Between the terrific cast, Rob Reiner's impeccable direction, and Sorkin's original play and script, there is a lot of credit for success to be handed out. It's difficult to see anyone but Tom Cruise as Kaffee. At that point in his post-Top Gun career, that was a role engineered for Cruise and his boyish good looks and cocksure gumption. While Nicholson's turn as Jessep is the most iconic, I'm always impressed by Demi Moore in what could be argued as her last good performance after Ghost before her career went off the rails and crashed into Striptease. She proves she had a dramatic presence to make her character feel real and authentic as a woman working in a very masculine world.

However, there is often an unsung hero of this film that wasn't given credit. Like so many films that earned great accolades, A Few Good Men was one of the many scripts doctored by legendary screenwriter William Goldman. While I don't know the full extent of those rewriters, apparently they were good enough for Sorkin to alter his own original play to reflect the character changes and dialogue. Suffice to say, when you know that Goldman had a hand in the dialogue, it's easy to hear those echoes of The Princess Bride and Butch Cassidy and the Sundance Kid in the way characters talk and present exposition. Even with Goldman's contributions, you can hear the seedlings that would sprout into what would become the foundation for Sorkin's infamous "walk-and-talk" banter.

Whether consciously or not, A Few Good Men is a movie I inevitably pull off my shelf at least once a year. I'll be looking for a good flick to keep me occupied and somehow that one always sticks out. I wouldn't call it an absolute favorite, but I do enjoy it. It's like comfort food at this point. I know what's going to happen and when, and most importantly what line is going to be said by what actor. I'm not someone who ever feels the need to quote along with a movie, but whenever Jack's on screen I feel the need to brace myself for one hell of a sinister line delivery. 25 years on, A Few Good Men may have much in the way of mystery anymore, but it still grabs and holds onto my attention with every viewing.

A Few Good Men arrives onto 4K UHD from Sony in a two-disc 4K UHD + Blu-ray + Digital set. The discs are housed in a two-disc black UHD snapper case with identical slipcover artwork. The disc loads to a static image main menu with Sony's unique navigation system indicative of their releases. The included digital copy does redeem through Movies Anywhere, however, it did not unlock a 4K UHD version, only a standard HDX presentation. The included Blu-ray is the exact same disc as the one already on the market. No new upgrades have been made there.

As more and more back catalog titles get released on 4K Ultra HD, it's becoming staggeringly apparent that Hollywood needs to up their game and finish their films in full 4K. As much as I can see and appreciate the uptick in quality for more recent films against their SDR counterparts, catalog titles from the 80s and 90s like E.T.: The Extraterrestrial or Léon: The Professional is where I continue to see the biggest improvements in image quality. This is especially the case with A Few Good Men. This disc is leaps and bounds beyond that MPEG-2 disc from 2007. While I never had any complaints about that disc, compared to its new 25th Anniversary 4K Ultra HD brother, it's a case of night and day - once the film gets rolling.

When that Columbia Pictures logo popped up I'd feared the worst with some heavy grain and soft image detail. When the attack on Guantanamo occurs, the grain evens out into a more natural cinematic presentation and improved details, but I wasn't blown away. Well, once that horrific scene is over and we cut to a close up of the American Flag billowing in the wind and the ensuing parade sequence, the improvements with the 4K presentation become strikingly clear. Fine facial details, costuming details, and the fall scenery are readily apparent. You can practically count the blades of grass and individual fallen leaves. With HDR10 employed, colors are vivid and beautiful - especially primaries. Those red stripes on Old Glory practically pop off the screen! The whites of the dress uniforms have a crisp shine to them. Flesh tones also look healthy and natural without anyone looking too tan, pale, or pink. Improved black levels also give the image a notable sense of depth and shadow separation.

Now for my small nitpicks that keep me from giving this a full 5-star rating. Eyeballs. Not just one character with watery eyes, but eyeballs in general. Depending on the lighting and the shot in question, with the HDR push eyes can sometimes look too glassy to be lifelike. The first instance of this is when Demi Moore is briefing her commanding officers about what just happened in Guantanamo. It looks like someone popped two glass glycerine-coated marbles in her eye sockets. It's a small thing because it's not apparent throughout the film, but when it does show up, any given cast member can suddenly look like a Nexus 6 about to get Voight-Kampffed. There are a few flashback sequences detailing PFC. Santiago's (Michael DeLorenzo) treatment where black levels may have been pushed a bit too hard allowing shadows to obscure faces and flatten the image. Again, this is me nitpicking an otherwise damn beautiful looking transfer. As my collection of shot-on-film 4K catalog titles grows, it's becoming more and more apparent which titles enjoy the biggest benefits from the format. On that note, I can't wait for Glory to make its way to 4K!

Where there is no question about quality improvement is in the case of Dolby Atmos v Dolby Digital 5.1. While I never thought I'd need or want to have A Few Good Men with an Atmos mix, it's a clear and obvious improvement. Dialogue has a more natural spacing to it, characters sound like they occupy various locations in a room without sounding crunched together. Atmospherics offer up a little bit of vertical activity but not a whole lot. The courtroom gives a nice bit of natural echo and scenes in the rain and thunder sound great with plenty of activity. Sound effects and scoring are where I noticed the biggest improvements. Going back to that opening parade credit sequence with rifle salute - the booming of the drums, the punch of the horns really kick in the LFE. As does the Marc Shaiman score. Whenever that low bass note of dread hits, man does that sound beautiful - really punches up the ominous tones of the movie. The rifle salute is a great example of channel movement, as each gesture and movement has a terrific snap to it. Even subtle scenes where Kaffee and Sam are pushing Sam's daughter in a stroller through Georgetown, you can ever so slightly hear the sound of leaves rustling in the wind. Granted, this isn't Spider-Man Homecoming, it's not loaded with action, but this Atmos mix is still dynamic and offers up a lot to appreciate and is leaps and bounds better than the 2007 release.

25 years is a damn long time when you think about it. I struggle knowing that certain movies like Blade Runner came out the year I was born, let alone a movie like A Few Good Men that I saw in the theater with my parents when I was ten! A Few Good Men was actually one of the first movies we rented on pay-per-view realizing that if we have enough blank tapes, we'd never have to buy movies again! (Yeah, that idea didn't last long.) From VHS to Blu-ray, this movie has been a staple of the collection. Fans of the film will be happy to hear that Sony did a damn good job with this new and improved A Few Good Men: 25th Anniversary Edition. The 4K image transfer allows for a clearer picture with richer colors and the Atmos mix gives the film a much more natural auditory presence than the previous 2007 release. Sadly, no new bonus features. If you're a 4K fiend and a fierce fan of this courtroom drama it's an easy one to highly recommend

Sale Price 22.99
List Price 30.99
Buy Now
3rd Party 79.99
In Stock.
See what people are saying about this story or others
See Comments in Forum
Previous Next
Pre-Orders
Tomorrow's latest releases