Eight years after the Joker's reign of anarchy, the Dark Knight, with the help of the enigmatic Catwoman, is forced from his exile to save Gotham City, now on the edge of total annihilation, from the brutal guerrilla terrorist Bane.

In the second installment to Christopher Nolan's Batman trilogy, the visionary filmmaker set the bar incredibly high, not only creating the rare sequel that surpasses its predecessor but also giving moviegoers what is largely considered the best comic adaptation ever. And although The Dark Knight Rises is arguably not on par with the sequel, it thankfully lived up to expectations and thoughtfully expanded on the grounded-in-reality universe set forth by Batman Begins. Picking up eight years after the events of the previous film, Nolan explores the ramifications of Bruce's decision to become a vigilante and endure the city's backlash. It treads softly on the ethical idea of circumventing the law and extending the power of the police to catch criminals, such as the Dent Act proving a success in eradicating criminal organizations. And during those years, Bruce Wayne (Christian Bale) has retired from crime-fighting, living an almost Howard-Hughes-like reclusive lifestyle, suggesting his disappointment in the symbol he originally set out for inspiring the people.

Similar to what they did in the sequel, the Nolan brothers take inspiration from the political climate of the time, devising a plot that pretty blatantly centered around contemporary socioeconomics. Born, both literally as well as figurately, in the slum bottom of the social hierarchy, Bane (Tom Hardy) harbors a disdain for the aristocratic elite of Gotham and in effect, incites a class conflict, as heard in his speech before releasing the prisoners of Blackgate Penitentiary. Much of what he does, and the few ideals he expresses, borders on the principles of extreme libertarianism pushing for anarchy but only through fear and intimidation of the city. And while Wayne goes through some kind of spiritual recovery, of essentially saving himself from the pit of hell, Selina Kyle (Anne Hathaway) does as she always does to stay alive in a chaotic world. Meanwhile, John Blake (Joseph Gordon-Levitt), an amalgamation of Dick Grayson and Jason Todd, fights to save Gotham with the help of Gordon (Gary Oldman), Lucius Fox (Morgan Freeman) and the mysterious Miranda Tate (Marion Cotillard). It's a big ensemble cast for a film that makes an excellent finish to the trilogy. 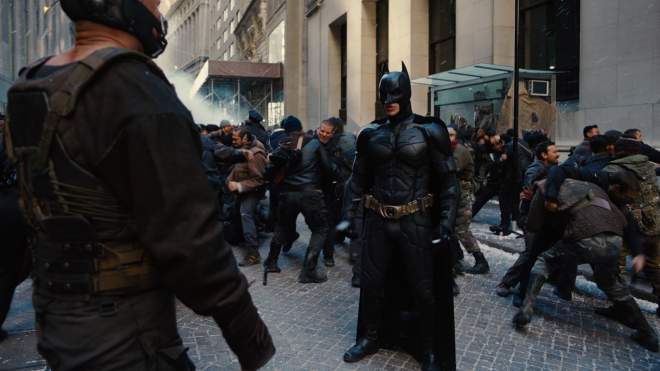 Warner Home Video brings The Dark Knight Rises to Ultra HD Blu-ray as a three-disc combo pack with an UltraViolet Digital Copy code, which can be redeemed at WB.com/redeemdigital and made available in HD SDR via MoviesAnywhere. But the same code can also be redeemed via VUDU.com where users have access to the UHD with Dolby Vision, which is the route I took. The triple-layered UHD100 disc sits comfortably opposite a Region Free, BD50 copy and a third BD25 disc containing supplements. All three are housed in a black, eco-cutout case with a glossy slipcover. At startup, viewers are taken to a screen that commences with a video clip before going static with the usual options along the bottom and music.

Batman fights for the soul of Gotham on 4K Ultra HD Blu-ray with another absolutely stunning and gorgeous HEVC H.265 encode that overshadows its Blu-ray counterpart and is undeniably the only way to watch the final chapter in Nolan's Batman trilogy. Like the sequel, the film was shot on a combination of traditional 35mm and IMAX 65mm film, which were later purportedly mastered in a 4K digital intermediate. And from the looks of things, the transfer may have been struck from that DI because the results are phenomenal. Right from the start, in the opening airplane-escape sequence, fine lines and objects are incredibly razor-sharp, exposing each rivet of the plane while the foliage in the distance remains distinct. Every nook and cranny of Selina's apartment is unmasked, the tiny pockmarks and imperfections of buildings are plainly visible, and the individual bricks of Wayne Manor can practically be counted. And like its predecessor, the IMAX footage delivers some of the most striking reference-quality moments, showing the fuzzy fabric of Bane's jacket, the minute specifics within his breathing mask or the intricate details of Batman's new suit.

Of course, the real showstopper is the massively improved dynamic range, providing the 4K presentation with an astoundingly beautiful and right-on-the-money contrast that now makes its HD SDR counterpart a less satisfying watch. Throughout the movie's 164-minute runtime, peak luminance is pushed beyond anything I previously thought possible, delivering remarkable pitch-perfect, true-to-life whites that give even Alfred's gray hair a radiant glow. Better still are the superior brightness levels showering every frame with dramatically richer midnight blacks that show stunning differences and degrees in the deepest, darkest corners. While maintaining extraordinary clarity and detailing within the gloomiest corners of Bane's sewer hideout, silky, inky shadows penetrate deep into the screen, providing the image with a cinematic appeal and an amazing three-dimensional quality. Specular highlights are equally phenomenal where the brightest areas now have a tighter, more realistic glow and light seems to bounce off various objects with a natural brilliance. There are several looking-through-a-window moments and the exterior nighttime shots of the city skyline are sensational, but my new demo scene is easily the robbery of the Gotham Stock Exchange sequence because it's simply breathtaking and jaw-dropping up until Batman's escape on the Bat.

Staying true to the filmmakers' stylized cinematography, the transfer comes with alternating aspect ratios, switching between 2.39:1 and 1.78:1 during specific action sequences, and again, the best moments are those opened IMAX scenes where colors seem to really pop. Of the three films, this one is the most colorful and animated, benefitting Wally Pfister's photography with a wider, more robust palette than before. And once more, the sequence demonstrating the capabilities and advantages of Ultra HD is the entire Gotham Stock Exchange sequence. Outside the building, the blues and reds of the flashing lights shine with stupendous, dazzling brilliance while the green in surrounding foliage is lively and vivid, and the police uniforms now look like a dark, midnight blue. Inside with the brokers, the pastel-colored vests are of a more neon, sumptuous shade, and facial complexions appear healthy and accurate with a natural rosiness around cheekbones and lifelike textures. The plumes of fire from explosions glow with an authentic fiery orange splendor while revealing the tiniest detail in the hottest area. Overall, this 2160p video ranks as one of the best-looking 4K HDR presentations ever, along with The Revenant, Hacksaw Ridge and Planet Earth II.

Batman struggles to understand what Bane is saying with the same DTS-HD MA 5.1 soundtrack enjoyed on the Blu-ray, and while an object-based audio option would have been a much-welcomed upgrade, this track remains a pure reference-quality aural experience sure to give anyone's home theater system a nice workout. Of the three movies, this lossless mix has been my personal favorite, enveloping the listener with a splendid array of action and atmospherics in the surrounds. The room fills with the noise of water all around during Batman and Bane's first showdown in the sewers, and their second fight is brimming with the screams and grunts of a massive street fight. These action-packed moments come alive when applying the receivers' Dolby Surround or DTS: Neural:X up-mixing functionality, effortlessly spreading many of those atmospherics into the overheads. But the best part of the design is a vigorously potent and robust low-end that will surely disturb the neighbors, energizing the room with a sweeping, ultra-low rumble during the stadium explosion while providing Bane's throaty voice and Hans Zimmer's score a weighty presence.

Although The Dark Knight set a new precedent in comic-book film adaptations, The Dark Knight Rises thankfully lived up to expectations and thoughtfully expanded on the grounded-in-reality universe set forth by Batman Begins.

Gotham turns into a war zone of class conflict on Ultra HD with a marvelous, reference-quality 4K HDR presentation that goes mano-a-mano against its HD SDR counterpart and easily wins. The war erupts with the same DTS-HD MA soundtrack enjoyed on the Blu-ray, and it remains an awesomely thrilling, bombastic aural experience with several demo-worthy moments. With the same set of supplements ported over, the overall package is highly recommended for anyone wanting one of the best UHDs currently available.

Sale Price 22.24
List Price 23.49
Buy Now
3rd Party 16.13
In Stock.
See what people are saying about this story or others
See Comments in Forum
Previous Next
Pre-Orders
Tomorrow's latest releases