When the menace known as the Joker emerges from his mysterious past, he wreaks havoc and chaos on the people of Gotham, the Dark Knight must accept one of the greatest psychological and physical tests of his ability to fight injustice.

Christopher Nolan followed up the success of his realistic take of the Caped Crusader with The Dark Knight, an even grittier, darker and unromanticized version of the Batman mythos. Considering the movie's immensely strong following and lasting cultural impact, it's probably stating the obvious this is the most beloved of all the Batman adaptations and the favorite in the Nolan canon. To this day, nearly ten years later, many kids too young to remember its original theatrical run still dress in the Batman and Joker outfits from this particular production. Without a doubt, a major part of its continued fascination and enjoyment over the years is the unforgettable performance of the late Heath Ledger as the homicidal psychopath Joker. Whereas other portrayals of the psychotic villain have traditionally been more cartoonish and wacky, Ledger's Jester of Genocide actually lives up to the character's famed insanity, a raving lunatic who is surprisingly intelligent and a highly talented Machiavellian schemer. And in this version of Batman's most famous supervillain, he is capable of literally anything to satisfy his own selfish desires.

Collaborating with his brother Jonathan and David S. Goyer, Nolan scrapped the wisecracking smartass persona most mainstream audiences are familiar with and essentially recreated the character as a twisted, dangerous menace without a backstory or history. This Clown Prince of Crime is shrouded in mystery and recklessly unpredictable — or at least, that's how he portrays himself to those who underestimate him, especially Christian Bale's Batman. If the Dark Knight super sleuth working in the fringes of the law and civil order is born of necessity to a lawless, corrupt city, then the Joker is a reaction to that necessity, a logical, calculating criminal who embraces the illogical. But because the Joker is driven by a faith and an ideology that others find irrational, Batman struggles with the best response, tempted to abandon the principles and values he espouses in order to defeat the enemy. For some, the subplot involving Harvey Dent (Aaron Eckhart) feels tacked on or shortchanged, but understood in the context of this dichotomy, Dent's fall from grace reveals how easily the scales of justice and civil order can be toppled, if not completely surrendered. 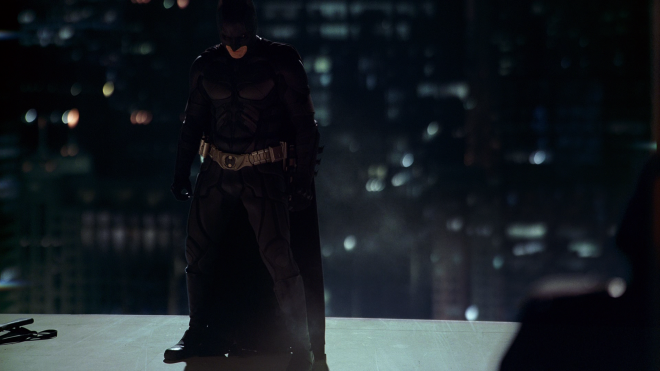 Warner Home Video brings The Dark Knight to Ultra HD Blu-ray as a three-disc combo pack with an UltraViolet Digital Copy code, which can be redeemed at WB.com/redeemdigital and made available in HD SDR via MoviesAnywhere. But the same code can also be redeemed via VUDU.com where users have access to the UHD with Dolby Vision, which is the route I took. The triple-layered UHD100 disc sits comfortably opposite a Region Free, BD50 copy and a third BD25 disc containing supplements. All three are housed in a black, eco-cutout case with a glossy slipcover. At startup, viewers are taken to a screen that commences with a video clip before going static with the usual options along the bottom and music.

Batman faces his greatest foe on 4K Ultra HD Blu-ray equipped with a stunningly gorgeous HEVC H.265 encode that not only exceeds expectations but easily bests the Blu-ray, making this the preferred way to enjoy the sequel. Reportedly struck from a new 4K digital intermediate, the transfer displays exceptional, razor-sharp details in nearly every scene, exposing the tiniest object in the background, the smallest architectural imperfection in the buildings and the fine stitching in the Joker's outfit. Originally shot on a combination of traditional 35mm and IMAX 65mm film, the results are a decidedly significant improvement over its 1080p counterpart with only a couple negligible and forgivable instances of aliasing. Better yet, the edge enhancement that once kept the Blu-ray from a perfect score now appears to be gone, which is an added bonus. And similar to Interstellar, the IMAX footage is simply jaw-dropping, demo-worthy eye-candy, showing outstanding definition and clarity with remarkable lifelike textures. Viewers can make out the minuscule details in the charred, blacken edges of Two-Face's CG face.

Also, like the Blu-ray, the 4K presentation comes with alternating aspect ratios, switching between 2.39:1 and 1.78:1 at the most seemingly random moments, which can be a tad annoying for CIH enthusiasts. Nevertheless, a pitch-perfect contrast delivers brilliantly sparkling and radiant whites, making Joker's face seem as though freshly applied and various vehicles come with a realistic shine. Most impressive are the luxurious, full-bodied blacks with spotless gradations between the lighter and darker portions of the frame, providing the image with a lovely three-dimensional, cinematic appeal that makes it feel as though watching it again for the first time in theaters. Nighttime sequences are lavished in silky, inky-rich shadows that never engulf or ruin the finer details. Arguably, the most dramatic improvement is the specular highlights, providing better detailing and clarity within the tighter glow of various light sources. Exterior nighttime shots of the city skyline are absolutely stunning where viewers can differentiate and make out the individual windows and offices of buildings. Many of these moments come with that looking-through-a-window effect fans will love, with the entire Joker trying to kill Harvey Dent sequence being my personal favorite to demo.

Unlike the first movie, the sequel comes with a noticeably brighter, more polished style that allows for a significantly wider color gamut. And on UHD, Wally Pfister's photography is spectacularly beautiful and striking with richly-saturated primaries throughout, such as the Joker's more vivid red makeup being distinctly different from the more crimson shade of blood. Joker's hair is more a toxic yellowish dye while his vest is a dark moss or dark reseda tone, and the blue sky comes with a lovely picturesque glow. The secondary hues benefit greatly as well, displaying more variation and richness between the various shades. The afternoon sky comes an attractive purplish glow while Joker's suit is more of a dirty plum color, and the fiery orange glow in the many explosions allow for the most minute detail within the hottest spot. Flesh tones also have a nice, lifelike rosiness around the cheeks of the cast.

For those interested in this set's HD Blu-ray presentation, Warners appears to have included the same Blu-ray as the original release, which now looks soft and unsatisfying compared to this new 4K Blu-ray. So, there's no remaster for the HD enthusiasts.

The Clown Prince of Crime shares his maniacal laugh on UHD with a new DTS-HD MA 5.1 soundtrack (48kHz/24-bit), which, like the first movie, did not reveal any significantly discernable differences from its Dolby TrueHD 5.1 counterpart (48kHz/16-bit). Far as I could tell, this remains the same reference-quality lossless mix, littered with lots of background activity nicely balanced across the entire soundstage, which exhibits a superbly clean and extensive mid-range. Even during the loudest, action-packed segments, the various frequencies maintain amazing detailed clarity with precise, well-prioritized vocals. The design also does splendidly well when applying the receivers' Dolby Surround or DTS: Neural:X up-mixing functionality, effortlessly spreading many of those atmospherics into the overheads. On one final, more interesting note, the low-end does feel a bit more extensive and commanding, providing the action and music with a larger sense of presence and a weighty impact. So, if there is any noteworthy difference, it is the 24-bit encoding allowing slightly more space for the bass to dig a tad deeper.

Christopher Nolan followed up the success of his realistic take of the Caped Crusader with The Dark Knight, an even grittier, darker and unromanticized version of the Batman mythos. Considered one of the best superhero adaptations, the plot is a complicated tale on the balance for maintaining law and order versus sacrificing morals for the sake of catching criminals and those wishing society harm. However, without a doubt, Heath Ledger's unforgettable performance as the homicidal psychopath Joker is a major part of the film's continued fascination and enjoyment over the years.

The battle for the soul of Gotham takes place on Ultra HD with a stunning, jaw-dropping 4K HDR presentation that easily bests and surpasses its HD SDR counterpart, offering fans several demo-worthy moments. The war erupts with a new DTS-HD MA track that comparatively sounds identical to the reference-quality Dolby TrueHD mix enjoyed on the Blu-ray. With the same set of supplements ported over, the overall package is highly recommended for anyone wanting show off their home theater system.

Sale Price 24.19
Buy Now
3rd Party 39.99
In Stock.
See what people are saying about this story or others
See Comments in Forum
Previous Next
Pre-Orders
Tomorrow's latest releases