For a full in-depth review of the Blu-ray SDR HERE.

"That's a whole lotta movie," gasped my wife after her first viewing of Christopher Nolan's Interstellar.

It was my third time through, and I have to admit, she's spot on. Interstellar, no matter if you love it, or hate it, is indeed a whole lotta movie. It's a continuously taut juggernaut of epic space action accompanied by Hans Zimmer's organ-infused score. There really isn't a moment in the movie that you could point to and say, "Well, that's dull." Some might take issue with the on-the-nose nature of the Nolan brothers' screenplay, but the movie never lacks excitement.

When I reviewed Interstellar during its initial theatrical release I said, "While stupendously broad in scope and epic space adventure, Nolan's "Interstellar" is also frustratingly jam-packed with so much explanation that there's little left up to the imagination." After seeing it a third time I'm not so sure I feel that way anymore. Yes, it does have a tendency to over-explain itself, but what stood out to me this time around was the intention of the script to throw out as many deep thoughts it possibly can within the first 40 minutes or so. Cooper (Matthew McConaughey), seems transfixed on coining a new phrase the future of the human race will use for eternity. The platitudes begin to wear thin right when the movie gets exciting, so it's easy to forget about the labored insistence of the screenplay to throw down eternally true witticisms.

The not-so-distant future is dire. Our planet is dying. America is trapped in an increasingly dangerous futuristic Dust Bowl. A blight has taken our crops.  One by one the world's major crop species are dying, leaving us hungry and relying on the last sustainable crop, corn. Though, it's just a matter of time before the world is out of food (though, curiously barley-based alcohol seems rather plentiful). What will we do then?

Cooper is a corn farmer, however, he was really born to pilot NASA rocket ships. Though when food became scarce, traveling the stars in spaceships seemed like a gargantuan waste of money. His young daughter Murph (young Mackenzie Foy, older Jessica Chastain), is a stubborn, thoughtful daughter who will no doubt be the key to the story as it unfolds. The relationship between Murph and Cooper is certainly the crux of the movie. I hate to pull the "You have to be a parent card," but it's just so true here. Thinking of being separated from my son by millions of light years conjures up within me an eternal sort of dread. It's something I couldn't even fathom. 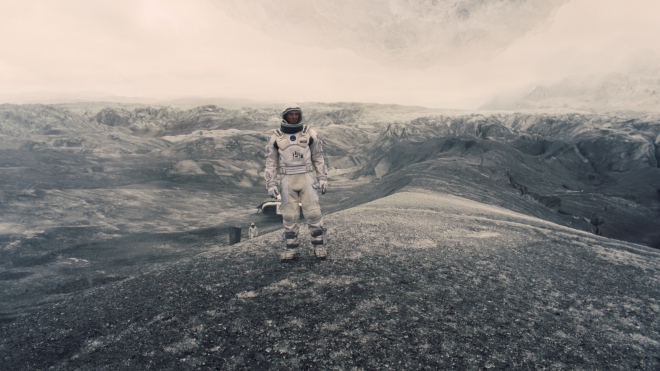 When Cooper learns that NASA has remained active, in secret, he's called upon by old friend Professor Brand (Michael Caine) to save humanity. No matter how much corn they try to grow, humankind will eventually succumb to the Earth's dusty future. Extinction of the human race is inevitable if they can't find a new place to live. A wormhole next to Saturn is discovered. Viable worlds lay in wait on the other side. Cooper, along with Brand's daughter (Anne Hathaway), and a small team set out to find out what's on the other side of the wormhole.

Nolan's visuals treat space as reverently and awe-inspiring as Terrance Malick's beautiful depictions of deep space during the Tree of Life. There's a sequence where Cooper has to dock with a space station spinning out of control. It's executed flawlessly and is some of the most exciting action from last year. What's so great is that Nolan takes some pretty scientific elements, and creates circumstances which are thrilling and understandable even to the layperson. Not to mention that his action scenes are wonderfully framed and expertly constructed as to lead you through an experience rather than splattering you with chaos.

There are some weighty consequences too. When the crew of the Endurance visits a planet orbiting a black hole they're forced to think of time as a commodity since the Theory of Relativity states that time will slow down when one nears a black hole. It's an immensely difficult idea to get your head around, but the movie is full of those kinds of dilemmas.

The conclusions that are reached can appear hokey on the surface. There's an "I've seen this somewhere else," vibe near the end. But, with Nolan's keen directorial eye, focused on the wonder of practical special effects, and a dominating performance from McConaughey, Interstellar overcomes most of its faults and satisfies in the end.

Paramount Home Entertainment brings Interstellar to 4K Ultra HD Blu-ray as a three-disc combo pack with an UltraViolet Digital Copy, which can be redeemed via ParamountMovies.com or VUDU, giving users access to the 1080p HDX version only. Inside the black, eco-vortex case with glossy slipcover, the triple-layered UHD100 disc sits comfortably opposite a Region Free, BD50 copy. The third is another BD50 disc containing the same supplements as before. At startup, viewers are taken directly to a static screen with the usual selection along the bottom and music playing in the background, which stops after about a minute.

Nolan's ambitious sci-fi epic goes on the lofty quest for life through the Ultra HD universe with a superb, often stunning HEVC H.265 encode, surpassing the Blu-ray by light-years, though some mild turbulence keeps it shy of a perfect flight.

The movie was originally shot on a combination of traditional 35mm and IMAX 65mm film, and those elements were later mastered in a 4K digital intermediate, which we can assume was used for this transfer. The results are a decidedly significant improvement over its 1080p counterpart. Admittedly, there are a couple spots of very mild aliasing along the sharp edges of buildings, the computer monitors and spacecraft exteriors, but it's negligible enough to be missed except by the most observant of videophiles. Aside from that, the picture quality is near-reference with the IMAX footage, in particular, being absolutely phenomenal and offering plenty demo-worthy eye-candy. Each of these sequences consistently display razor-sharp details of the shuttle, the farmlands, exotic planets and in the costumes. The 35mm scenes also show outstanding definition and clarity, but it's interesting to see that it's slightly softer by comparison. Nevertheless, from the facial complexions to the fabric and stitching of clothing, the transfer is stunningly revealing with remarkable lifelike textures that will surprise viewers.

Similar to the Blu-ray, the film is presented as it was shown in IMAX auditoriums with the aspect ratio alternating between 2.39:1 and 1.78:1, which for CIH enthusiasts, might be a tad annoying but is also more immersive. The 4K presentation is simply exceptional and sensational, sparkling with brilliant whites that pop off the screen with radiant luminosity, making the entire picture from start to finish lively and energetic. Contrast is pitch-perfect throughout, giving the sky a lovely, realistic glow in the fluffy clouds while allowing remarkable visibility of the most minute feature and facet in the distance. Full-bodied black levels are silky rich and luxurious with spotless gradations between the lighter and darker portions of the frame, adding a splendid intensity to the three-dimensional image and delivering clear differences between the various shades, even during the darkest sequences. Superb specular highlights provide the edges of the marine robots with a dazzling, realistic shine while various light sources radiate with a tighter, revealing glow. The eyes of the cast come with a lovely, glistening twinkle, and viewers can practically count the sparkling, flickering stars against the pitch-blackness of space.

Arguably, one area the UHD doesn't show a massive jump from the Blu-ray is the color palette, which was intentionally restrained while favoring a grayer colder mood to better complement the plot and its visual themes. Nevertheless, the gorgeous, awe-inspiring photography of Hoyte van Hoytema definitely benefits, showcasing intensely-animated reds and true-to-life blues in the skies. Vivid, richly-saturated greens seem to pop out the most during the farmlands scenes and aboard the space station orbiting Saturn, but secondary pastel hues are also brimming with a boldness throughout. The yellow ring circling Gargantua dazzles and illuminates the 2160p video with sumptuous brilliance and energy while showing light rays of fiery orange in the outer areas. And the computer screens show a brighter greenish cyan. Flesh tones also come with a more realistic reddish hue while Mr. McConaughey looks much tanner than before, especially when sharing screen-time with the younger Murphy. Overall, despite the deliberate cinematography limiting the palette, the 4K presentation is simply phenomenal and continuously jaw-dropping.

The same bombastically loud DTS-HD Master Audio 5.1 soundtrack enjoyed on the Blu-ray has been ported for this Ultra HD, and while it would have been nice to have an object-based audio option available, this lossless track remains pure reference quality that probably requires a polite warning for the neighborhood. I only want to add that the design lends itself awesomely to the receiver's DSU function, effortlessly bleeding the many atmospherics and Hans Zimmer's score into the overhead channels. Also, the track comes with a powerfully responsive, earth-shattering low-end with a couple appreciable moments that really dig deep into the ultra-low frequencies.

All the same supplements are shared between the three high-def formats, which can be read in more detail in our review of the standard Blu-ray HERE.

Audiences with a deep-rooted love for and strong familiarity with the science-fiction genre will quickly note the lack of originality in Christopher Nolan's epic adventure Interstellar, freely taking inspiration from a variety of sources and beloved film classics. However, the real accomplishment in this production is Nolan incorporating real science into a relatively straightforward plot and successfully making the whole thing impressively entertaining, littered with spectacular, marvelous visuals that effectively leave an impression.

The ambitious, lofty search for a habitable planet takes off on Ultra HD with a stunning, jaw-dropping 4K presentation that successfully solves the gravitational propulsion problem and surpasses its HD SDR counterpart. It lands with the same bombastically loud DTS-HD soundtrack enjoyed on the Blu-ray, which lends itself nicely to the receiver's DSU function, while also porting over the same set of supplements as before. At journey's end, the overall package is highly-recommended for fans and those hungering for some of the best HDR goodness currently available.

Sale Price 17.86
List Price 25.99
Buy Now
3rd Party 22.99
In Stock.
See what people are saying about this story or others
See Comments in Forum
Previous Next
Pre-Orders
Tomorrow's latest releases