After training with his mentor, Batman begins his fight to free crime-ridden Gotham City from the corruption that Scarecrow and the League of Shadows have cast upon it.

Similar to Michael Keaton drawing skepticism when it was announced he would don the Batsuit in Tim Burton's 1989 adaptation, I had my doubts of seeing Christian Bale as the Caped Crusader in Christopher Nolan's 2005 reboot. Years prior, the British actor had left an impression with excellent performances in Velvet Goldmine, Reign of Fire, even Equilibrium and especially American Psycho. But his work on those films always made me think of him as dramatic, not comic book camp. It was easy to imagine him in the role of billionaire philanthropist and playboy Bruce Wayne, but the brooding, darkly vengeful superhero who strikes fear in the hearts of criminals was a different matter. Thankfully, Bale successfully appeased my hesitations and quickly became the Batman I always dreamt of as a child, the masked vigilante hiding in the dark shadows of Gotham's crime-ridden streets. He brought a psychological pathos and gravity writhing behind the character's motives which others had never fully embraced or explored, making his outrage and passionate desire to save his beloved city all the more justified, if not also easy to empathize with.

Of course, a big part of the film's success is also due to Nolan aspiring for a grittier, more somber version of the comic superhero, one grounded in reality with greater emphasis on his growth and development. Written by Nolan and David S. Goyer, the story follows a young Wayne through his training as a member of the League of Shadows under the leadership of Ra's al Ghul (a terrific Liam Neeson). Seeing this rarely talked-about background detail in the history of Batman on the big screen for the first time thrilled this comic-book reader immensely at the time, along with the debut of Scarecrow (a perfectly cast Cillian Murphy), one of my personal favorite supervillains. Rounding out an already impressive ensemble cast is the excellent Gary Oldman as James Gordon and the esteemed Michael Caine as Alfred Pennyworth. Although Rachel Dawes (Katie Holmes) is a new addition to the mythology, I rather like her role as Bruce's love interest, who functions like a metaphor for our hero's frustrating struggle of chasing after the unattainable. Looking back, Nolan's grittier take has left a lasting impact, which continues influence future comic book adaptations. 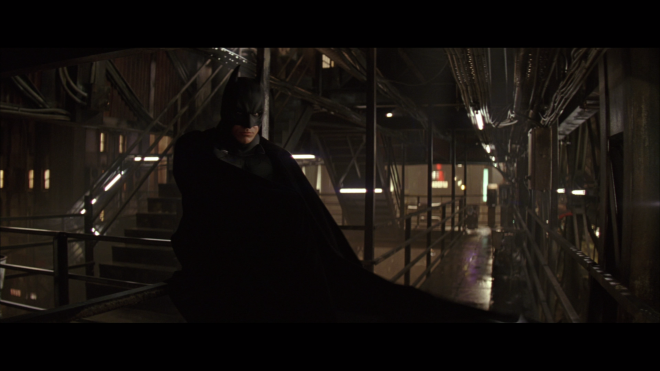 Warner Home Video brings Batman Begins to Ultra HD Blu-ray as a three-disc combo pack with an UltraViolet Digital Copy code, which can be redeemed at WB.com/redeemdigital and made available in HD SDR via MoviesAnywhere. But the same code can also be redeemed via VUDU.com where users have access to the UHD with Dolby Vision, which is the route I took. The dual-layered UHD66 disc sits comfortably opposite a Region Free, BD50 copy and a third BD25 disc containing supplements. All three are housed inside a black, eco-cutout case with a glossy slipcover. At startup, viewers are taken to a screen that commences with a video clip before going static with the usual options along the bottom and music.

The Caped Crusader springs into action to save Ultra HD with a strong and good-looking HEVC H.265 encode, offering a nice step up from its Blu-ray counterpart. Overall clarity and definition receive a welcomed uptick, revealing a bit more background information when walking around the bat cave or the League of Shadows' training temple. Viewers can better make out the architectural design of the buildings and streets, along with all the filthy imperfections, and faces are often lifelike, exposing individual pores and the smallest, negligible blemish in close-ups. However, for a majority of the runtime, the 2160p video appears fairly soft with several blatantly blurry moments throughout, such as Bruce's initial return to Gotham and he walks upstairs to his room with Alfred. Other scenes showing poor resolution quality also occur during Bruce's training montage and Batman's police chase. Originally shot on traditional 35mm film, some of the weaker sequences can be excused as being related to the original photography, but this transfer seems like an upconvert of the master used for the previous Blu-ray.

The same goes for contrast, looking on par with its HD SDR counterpart but nonetheless offering enough of a minor improvement to appreciate the upgrade. Whites are noticeably brighter and cleaner, but the better improvement are the specular highlights. It's nothing drastically dramatic, more subtle and minor but there nonetheless. The light shining from various fixtures and sources is tighter and more constricted to reveal a bit more detailing within the brightest areas. However, there are times when it also feels as though running hotter than normal, washing away finer details such as in the plumes of explosions or the flames. Brightness levels, on the other hand, receive the biggest boost and gain from the jump to HDR, delivering some lush, silky blacks that provide the 2.35:1 image with a lovely cinematic appeal. Granted, there a few moments where the finest object and detail is lost in the gloomiest corner of a room or the darkest portions of the frame. Blacks are so incredibly rich and opulent, there doesn't appear to be much gradational difference from one shade to the next, occasionally making Batman's suit look like a glob of blackness.

Similarly, the best aspect of this 4K presentation is the wider color gamut, showing a richer and more vibrant selection that makes the entire video really come to life. But as with everything else, it's not quite the massive night-and-day difference would have hoped for, probably due to original cinematography where the palette was largely limited for creative and thematic purposes. Nevertheless, the glaciers during Bruce and Henri's sparring fight show a more realistic bluish-green while the Himalayan flower shines a brighter blue, and the green in surrounding foliage is teeming with life and intense energy. The more appreciable improvement/difference is the transfer showing a warmer yellowish hue that makes much of Gotham seem grimier and more squalid while making flesh tones appear more natural-looking. The fiery orange of explosions dazzle the screen while Batman's eyes and mouth during the Narrows' hallucinogenic trip glow with a more noticeably purply shine.

Batman's attempts to save his beloved city are equipped with a new DTS-HD MA 5.1 soundtrack, which as far as I could tell, did not reveal any discernable differences from its Dolby TrueHD 5.1 counterpart. For all intents and purposes, this is the same reference-quality lossless mix as before, impressively layered with a variety of atmospherics that effortlessly pan from one speaker to the next. A couple of my personal favorite moments are Bruce and Henri's sparring session as the cracking of the glacier echoes all around and when Wayne Manor is burning as the wood in the ceiling is heard distinctly splintering in the background. And while it would have been nice to have an object-based audio option available, the design lends itself splendidly to any receivers' Dolby Surround or DTS:Neural:X up-mixing functionality, generating an even more satisfying soundtrack. I also would like to add that the low-end is couch-shaking powerful, giving the Batmobile a deep, throaty rumble.

My initially hesitation of a new Batman reboot film series were quickly extinguished when watching Christopher Nolan's Batman Begins in theaters. I almost instantly fell in love with his grittier, more somber take of the Caped Crusader, an adaptation grounded in reality with greater emphasis on the character's growth and development into becoming a masked vigilante. And thankfully, Christian Bale's performance is also one of the more memorable portrayals of the comic superhero.

Warner Bros. unleashes the Bat to save Ultra HD with a strong and good-looking 4K HDR presentation that provides a step-up over its HD SDR counterpart but doesn't really compare to some of the best we've seen in the still relatively young format. Added to that, our dark hero takes to the streets with a new DTS-HD MA track that comparatively sounds identical to the reference-quality Dolby TrueHD mix enjoyed on the Blu-ray. With the same set of supplements ported over, the overall package is recommended for the most loyal fans, but even HDR enthusiasts might be willing to take a chance on this minor upgrade.