Hacksaw Ridge is the extraordinary true story of Desmond Doss (Andrew Garfield) who, in Okinawa during the bloodiest battle of WWII, saved 75 men without firing or carrying a gun. He was the only American soldier in WWII to fight on the front lines without a weapon, as he believed that while the war was justified, killing was nevertheless wrong. As an army medic, he single-handedly evacuated the wounded from behind enemy lines, braved fire while tending to soldiers, was wounded by a grenade, and hit by snipers. Doss was the first conscientious objector to ever earn the Congressional Medal of Honor.

There's a moment in 'Hacksaw Ridge' which finally convinced me we were in the midst of a great war film, where everything which preceded it felt justified, canceling out its formulaic trappings. Halfway into the movie, a fresh platoon, led by CPT Jack Glover (Sam Worthington) and Sgt. Howell (Vince Vaughn), arrives on the shores of Okinawa, and when they stand at the bottom of a cliff, the POV camera looks up at the vertical incline as if it were a colossus, an unconquered monster that could easily vanquish the anxious, inexperienced soldiers. Minutes before, they marched past trucks of dead soldiers and a company of young, tired, defeated men going in the opposite direction while also hearing horror tales from other combat medics joining their division. While the men stare at the dark, burnt edge after being bombed, there is an ominous air of silence blowing overhead, and the scene is disturbingly quiet. Even after they scale the cargo climbing nets to the top, a thick smoke makes it nearly impossible to see the enemy nearby.

The tension-filled, anxiety-ridden sequence is deliberately restrained and perfectly measured, calculatingly luring viewers into a similar state of unease as the characters. And it's really not until this moment I began to slowly forgive the filmmakers for the rather mawkish and frankly conventional melodrama that occupied the entire first half. Inspired by the amazing heroics of a young pacifist who enlisted at the height of WWII, we spend a great deal of time with Desmond Doss (an impressive Andrew Garfield), familiarizing us with the idyllic small town he grew up in and how he met his future wife, Dorothy (Teresa Palmer). I must admit their meet-cute is genuinely charming, but the rest of Andrew Knight and Robert Schenkkan's script ultimately feels generic and routine. Despite a praiseworthy performance by Hugo Weaving as Doss's deeply troubled father, the story simple runs through the usual motions, hitting all the requisite beats meant to gain our sympathies and establish an alliance with Doss. 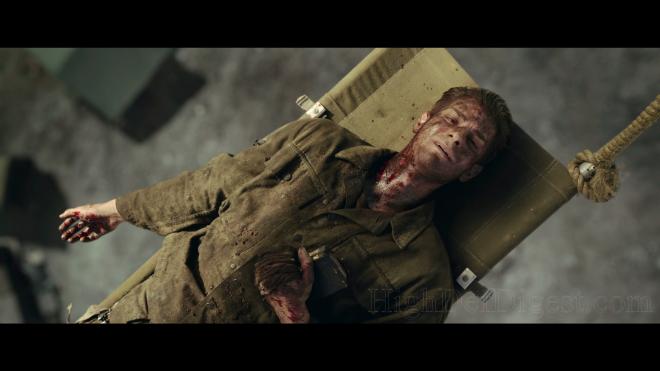 Going into the second quarter, things improve slightly when Doss manages to make more enemies than friends during basic training, magnetizing the ire of his superiors and infantryman Smitty Riker (Luke Bracey). He is quickly outcast in one pivotal scene that rapidly spirals out of his control and turns his pacifism into a sense of humiliation and contempt, which follows him into the battlefield. Of course, this familiar pseudo-underdog trope predictably opens doors for Doss surprising fellow soldiers with his endless supply of bravery, repeatedly risking his life to save theirs. In real-life, the combat medic single-handedly saved 75 infantrymen during the Battle of Okinawa and the first conscientious objector to be awarded the Medal of Honor. Of equal, or arguably more, interest is the level of backlash and repercussion Doss endured prior to proving himself in combat, targeted and harshly bullied, in essence, for his religious convictions, which ironically contradicts the function of serving during wartime.

As we've seen in his 'The Passion of the Christ,' the strength of 'Hacksaw Ridge' comes down to Mel Gibson, who hasn't sat in the director's chair since 2006's 'Apocalypto,' humanizing a story that admires the protagonist's accomplishments in favor of exploiting his faith, which isn't to say the film doesn't come with notable drawbacks. At times, the production borrows and mirrors other war classics, with several specific battle sequences seeming like (unconscious) replicas of 'Tropic Thunder,' namely those moments of Doss carrying injured combatants over his shoulders. And like the joke expressed in Ben Stiller's satire, one can't help but imagine many of these moments being little more than deliberate Oscar-baiting. Added to that, Gibson can't help infusing some of Doss's brave rescue attempts with slight miracle-like implications, such as pulling a soldier thought to be dead out from the dirt and soon after, helping another regain his sight.

However, in spite of these minor flaws, which are, in all honesty, negligible nitpicking, Gibson, along with cinematographer Simon Duggan, editor John Gilbert, and a talented team, brings to life the harrowing story of a real-life hero with a great deal of passion and admiration. After years of controversy and negative publicity related to this personal life, 'Hacksaw Ridge' marks Gibson's comeback as an accomplished, confident storyteller who knows his craft.

Summit Home Entertainment brings 'Hacksaw Ridge' to 4K Ultra HD Blu-ray as a two-disc combo pack with a flyer for a Digital HD Copy. At the moment, we are unable to verify the correct size of the content, but the triple-layered UHD100 disc sits comfortably opposite a Region A locked, BD50 disc inside a black, eco-cutout case with a glossy slipcover. At startup, the disc goes straight to the main menu with full-motion clips and music.

The war drama conquers Ultra HD with a stellar, reference quality HEVC H.265 encode in HDR10. The most notable improvement over its Blu-ray counterpart is the disappearance of visible banding keeping the Blu-ray edition just short of perfection. The most egregious moment, when the sun's early morning rays bathe the aftermath of the previous day's battle now looks gorgeous and natural.

Originally shot on the Arri Alexa and Red Epic Dragon cameras at near 4K resolution, the digital photography displays sharp definition in every scene. Every stitch and thread in the clothing and uniforms is distinct, and viewers can even make out the different types of fabric used. The tiniest piece of debris, fragment and rubble is remarkably detailed, individual hairs are discrete from each other, and every minutiae of the battle is at all times crystal clear. Pores, scratches and negligible blemishes are plainly visible at all times and remain lifelike underneath all the dirt, soot and grime covering faces, including the five o'clock shadow of some actors.

The overall 4K presentation is noticeably brighter, with pitch-perfect contrast maintaining exceptional clarity and visibility into the far distance. The video is showered brilliant, true-to-life whites while specular highlights radiate with dazzling luminosity, allowing the bright whites of initial explosions to glow and the edges metal objects sparkle with realism. Brightness levels deliver inky rich blacks and dark penetrating shadows, providing the 2.40:1 image with depth and an appreciable film-like quality. As before, the palette is deliberately skewed to warmer, accurately-rendered earth tones, but now, the video alternates between a more visible yellowish and greenish hue, depending on the scene. Still, the overall picture is awash with a sumptuous array of primaries. The crimson red of blood is appreciably darker and fuller, the azure blue of the sky appears more realistic with a tinge of gray, and the green in the uniforms and foliage is animated throughout.

The award-nominated film also hits home video with an amazing, demo-worthy Dolby Atmos soundtrack that throws viewers into the thick of battle and is sure to have neighbors calling in reinforcements. And it does this almost immediately, opening with a graphically violent sequence of sheer pandemonium, filling the entire room with the terrifying chaos of combat.

The scene is actually meant to instantly grip and absorb the viewer, functioning more like a tease of what's about to come in the second half of the film. After those opening moments, taking audiences back fifteen years earlier, the first half is a character-driven drama with priority given to the soft-spoken dialogue and various conversations. The front soundstage feels broad and spacious with an exceptional sense of presence, as an assortment of noises fluidly travel between all three channels and into the front heights keeping the listener engaged. On several occasions, the local wildlife and the commotion of a small, bustling town move into the sides and rears while basic training sequences are crowded with the swarming, busy commotion of military activity.

As expected, the object-based lossless mix suddenly erupts when soldiers land on the shores of Okinawa. The battles practically employ every speaker with debris and rubble flying directly above and raining down everywhere. Bullets whiz overhead and from every direction, the yells and cries of wounded soldiers fill in the gaps, and the blasts of fire from flamethrowers flawlessly pan from one side of the room to the other. Even those brief intervals of peace come with faint, subtle atmospherics occupying all the speakers, creating a stunningly immersive 360° soundfield. The loudest, most turbulent sequences maintain superb clarity thanks to a remarkably sharp and detailed mid-range while a thunderous, authoritative low-end provides a robust, wall-rattling impact to every explosion, digging as low as 10Hz on a couple occasions (bass chart).

Inspired by the amazing heroics of a young pacifist who enlisted at the height of WWII, 'Hacksaw Ridge' tells the story of combat medic Desmond Doss and the backlash he endured before proving his bravery to his fellow soldiers. In spite of relying on a few clichéd tropes, which are admittedly negligible nitpicks, the film marks Mel Gibson's comeback as an accomplished, confident storyteller who knows his craft. The Ultra HD Blu-ray arrives with a reference quality 4K presentation and a demo-worthy Dolby Atmos soundtrack. Although supplements are sadly light, the overall package is nonetheless recommended.

Sale Price 13.63
List Price 19.99
Buy Now
3rd Party 59.99
In Stock.
See what people are saying about this story or others
See Comments in Forum
Previous Next
Pre-Orders
Tomorrow's latest releases