It's been ten years since the original Planet Earth series aired on television, raising the bar for future nature documentaries by capturing some of the world's most exotic — and in some cases, rare — animals braving dangerous environments. The filmmakers return with yet another six-part sequel, aptly titled Planet Earth II, that arguably isn't quite as effective as its predecessor, which was a phenomenal feat and superb series to beat in the first place. But the follow-up stands on its own and serves as an excellent companion piece, a continuation of the original's epic intent with even more stunning photography of our planet's fellow cohabitants surviving under the most extreme conditions and in some of the most desolate parts of the Earth. The new doc immediately sets itself apart by being the first shot and presented in 4K Ultra HD and using the latest camera technology, such as drones, heat-sensitive rigs and specially designed infrared "camera traps." The results are some of the most remarkable and spectacular views of sunsets and sunrises, of small critters battling the odds and of our fellow mammals struggling to protect their young.

To also distinguish this program from the rest, the filmmakers zoom their focus on the harshest environs on Earth. The voice of legendary narrator Sir David Attenborough eloquently explains the series will show that in spite of the life-threatening surroundings, animals have adapted unique characteristics and traits to ensure their survival. Each creature has amazingly evolved the intelligence and skills for overcoming the severest of challenges. In the "Jungles" episode, high frame-rate cameras make it possible for us to witness a tiny frog clinging to a leaf while swatting away a swarm of wasps trying to steal his tadpoles. In another scene, a baby spider monkey holds a branch for dear life with its tail, and we watch in suspense as father races to catch its offspring in the nick of time. In "Mountains," baby ibex instinctively knows how to jump, run and hike along the steepest edges of cliffs with the grace of a ballerina. But perhaps more jaw-dropping is watching a female golden eagle viciously fight against hungry males over a carcass during the dead of winter. 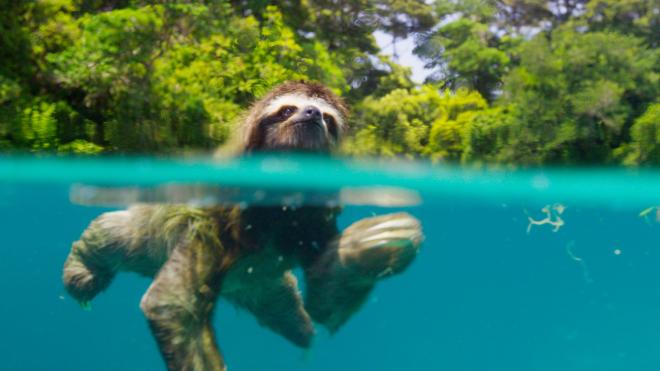 For approximately fifty minutes, each episode mesmerizes and has us glued to the edge of our seats with one spectacular display after another, showing the incredible proficiency with which these accomplished creatures battle the elements. The sheer, unadulterated will to live is truly astounding. In some of the most desolate and isolated places as in "Islands," freshly-hatched marine iguana immediately tap into this will when faced against a horde of hungry racer snakes as they scurry to the safety of the beach. Penguins of the volcanic Zavodovski Island risk their lives every day to fish for food and feed their squawking chicks. On the more extreme side, birds have mastered ingenious methods for tackling daily struggles in "Deserts," such as the aptly named Butcherbird handling its food as though it were a gruesome scene from a horror movie. But in the coastal deserts of south Africa, resourceful beetles take advantage of the morning dew for replenishing themselves.

Planet Earth II shares similarities with its predecessor in its general theme of uniting each episode as part of a grander whole. As before, the beautiful, awe-inspiring visuals of nature ultimately serve as reminders of what we stand to lose when choose to ignore our responsibility for maintaining our Earth. Without having to hammer the point, Sir Attenborough entertains his audience with harrowing stories while the stunning photography nudges thoughts on the need to ensure the survival of both Mother Nature and all her creatures. As humans continue to populate the planet and encroach on other animals' territories, many of our fellow Earth dwellers manage to transform cities into surprisingly livable habitats, such as the peregrine falcon of New York City or the monkeys thriving in the busy streets of India. But this isn't true of all creatures where evolution is sometimes taking a bizarre, sometimes unfortunate turn: catfish have developed a taste for pigeons and turtle hatchlings confuse city lights for ocean water.

But in spite of these darker aspects of nature, our wonderful narrator reminds viewers there remains plenty of dazzling beauty to be found. All that is needed is a small effort to want to live in harmony with the rest of the natural world, that we can build for our survival as well as for all other creatures.

BBC Video brings the six-part series Planet Earth II as a three-disc package. Inside a black, eco-elite keep case with a lightly embossed slipcover, one dual-layered UHD66 disc is on the opposing panel while the second dual-layered UHD66 disc sits comfortably atop a third Region Free, BD25 disc containing the bonus material. At startup, owners are taken straight to a menu screen with full-motion clips and music where viewers can choose to watch a single episode or click "Play All."

The nature documentary debuts on Ultra HD with an absolutely marvelous, reference-quality HEVC H.265 encode that will have jaws dropping to the floor. This is easily, hands-down, the most beautiful, stunning picture we've seen yet on the format, displaying razor-sharp details in every frame. The series was made possible thanks to a combination of high-rez digital cameras with resolutions ranging from 6K and standard HD.

We can distinctly make out the tiny veins in separate leaves, while every fiber and pattern are exposed in the bark of trees. The fur coats of various animals are remarkable to behold with lifelike realism, showing the sometimes rough texture of individual hairs, while the microscopic edges of insects' exoskeletons are resolute. Some of the most extraordinary moments and shots are those involving the birds and lizards because the close-ups reveal the ultra-fine filaments in individual feathers and each rugged, jagged bump in every reptile's scaly body. There a few softer scenes scattered throughout, very likely due to the camera being for a particular shot, but they are too far and few in between to hurt the overall score and the doc's most astonishing moments.

Presented in its original 1.78:1 aspect ratio, the 4K presentation is simply beyond compare with brilliant, comfortably bright contrast and sparkling, pitch-perfect whites. The edges of fluffy clouds against the blue sky come with an ecstatic glow and a radiant luminosity. Thanks to some of the most exceptional specular highlights we've seen of the format, droplets of water and the small waves in still water glisten against the sun's rays while the tiny ice crystals in the snow shimmer in the sunlight and individual grains of sand tickle beneath the heat of the sun. Full-bodied blacks are inky rich and luxurious with spotless gradations between the lighter and darker portions of the frame, delivering clear differences between the various shades in the dark, poorly-lit sequences. The brightness levels also add a sense of realism to the continuously awesome three-dimensional image, creating a phenomenal looking-through-a-window effect videophiles will love.

From beginning to end, the 2160p video is an endlessly dazzling, hypnotizing feast for the eyes, delivering a smorgasbord of vibrant colors that never falter. The most immediate aspect sure to astonish is the lush, opulent greens of the grass, the leaves of trees and other bits of vegetation strewn across the ground. A varied, sumptuous palette provides each animal with a lifelike luster, especially the intensely vivid primaries in some of the most colorfully exotic birds. The sky not only radiates with resplendently glowing blues, but the mornings come with a softer pastel shade, accompanied by faint hues of crimson and peach. Sunset sceneries, on the other hand, smoulder with ecstatic tones of deep purples, beautiful magentas, sparkling pinks and fiery oranges. These and many other moments are simply stunning, making this doc the new go-to demo disc for UHD.

Along with the superb picture quality, nature lovers are also treated to an equally demo-worthy DTS-HD Master Audio 5.1 soundtrack that splendidly plunges viewers into each extreme environment. The episodes in the rainforests and other heavily wooded areas are continuously busy and active, as the chirping, tweeting and squawking of birds are heard in the distance while the hollow bellows of primates and the high-pitched chirruping of insects echo all around the room. On several occasions, many of the animals move between channels — from front to back, left to right and vice versa — with discrete, flawless panning, creating a terrifically satisfying and immersive 360° soundfield.

With much of the activity contained in the front soundstage, imaging feels marvelously broad with a spacious, welcoming sense of presence throughout. An extensive mid-range delivers distinct details during the loudest moments, and while engaging the DSU in the receiver, the design nicely lends itself into the front heights, creating an awesome overarching wall of sound in several scenes. Sir David Attenborough's voice is precise and well-prioritized over the action, sure to soothe viewers into relaxation while animals survive their violent environments. Bass is not particularly noteworthy, but there are a few sequences with a good amount of oomph and weight providing appreciable depth.

Planet Earth II Diaries (HD, 54 min): A six-part making-of piece made up of interviews and tons of BTS footage. They each detail the challenges of capturing some of the series' stunning photography.

Ten years after the original made a big splash on television, Sir David Attenborough and his team return for Planet Earth II. Keeping to the theme and spirit of its predecessor, the six-part series comes with more remarkable, stunning photography of animals while watching them survive some of the world's most hostile and perilous environments. The Ultra HD arrives with a spectacular, reference quality 4K video and an equally satisfying DTS-HD soundtrack, making this presentation the new go-to disc for demoing the format's capabilities. Sadly, supplements are rather lacking, but the overall package is highly recommended for fans of excellent nature documentaries.

Sale Price 19.99
List Price 59.99
Buy Now
3rd Party 11.55
In Stock.
See what people are saying about this story or others
See Comments in Forum
Previous Next
Pre-Orders
Tomorrow's latest releases