Star Trek VI: The Undiscovered Country delivers upon the nearly impossible task of giving the original crew of the Enterprise a fitting sendoff within a genuinely excellent film with timely political overtones wrapped up in a tense mystery. With both cuts on 4K Ultra HD, fans can choose their favored version of the film with Director Nicholas Meyer’s preferred 2.39:1 aspect ratio in Dolby Vision HDR. With excellent audio and tons of bonus features, this final voyage of the original cast is a bittersweet goodbye to one of the greatest cast of actors ever assembled. Highly Recommended

To properly close out a generation of adventures, Star Trek VI: The Undiscovered Country brings back our original crew (with Sulu getting his own ship) for one last mission. After the abject failure that was the fifth film, this final voyage brought in franchise heavy hitter Nicholas Meyer from Wrath of Khan to right the ship and deliver a politically-charged and highly entertaining film. For all intents and purposes, this film is a rousing success helping bring a fitting close for the original crew with a bittersweet send-off that gives every member a true fan moment to shine. With Christopher Plummer as the Shakespear-spewing Klingon General Chang, we get a genuinely lethal bad guy for a story wrapped within a classic whodunnit structure letting Spock play detective while Kirk and McCoy get to wax philosophical about aging out of their universe.

I was nine years old when this movie hit theaters. The Berlin Wall had come down, and the global threat of communism was essentially vanquished. With those geopolitical happenings still fresh in the news, it was impossible to miss this film’s themes and ambitions. If there’s a failing to be leveled at Undiscovered Country it’s how on-the-nose everything is. While the original series never really stood in for a politically allegorical “us-vs-them” surrogate, it does fit well for this film. The Klingons have always been the intergalactic bad guys, but somewhere in the timeline, the Federation had patched things up well enough for dear old Worf to be a crewmember of the Enterprise for The Next Generation. So this film more or less fills in that plot gap while expounding on the nature of age and deep societal change. 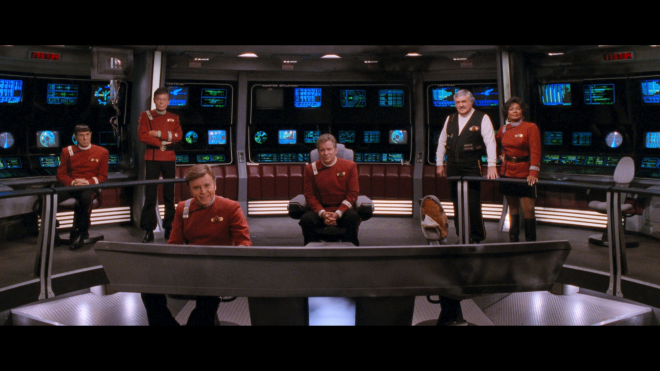 The film’s themes may be clunky, but I love this one. I remember being so excited to see this in theaters and unlike V, it still holds up very well. And both cuts are very good. The Director’s Cut may add some extra tidbits, some extra character beats, and a little extra silly Scooby-Doo reveal at the end, but all in all, this film was a fitting send-off. It’s a shame that George Takei’s Sulu couldn’t actually appear with the rest of the cast in the same room (that’s a whole mess I’m not going to dig into), but that final fanfare with each castmember signing their names against a traveling starfield is enough to bring any fan of Star Trek to tears. I know I get weepy every time the final credits start to roll.

Vital Disc Stats: The 4K Ultra HD Blu-ray
Star Trek VI: The Undiscovered Country kicks in the warp drive for a new two-disc 4K Ultra HD Blu-ray with Digital copy release. The discs are housed in a standard black case with identical slipcover artwork. The 4K version is pressed on a BD-100 disc with the 1080p on a BD50 The discs load to static image main menus with basic navigation options. For the 4K disc, you can choose between the Theatrical Cut or Director’s Cut from the Play sub-menu. The included Blu-ray only features the Theatrical Cut in 1080p

NOTE: All images are sourced from the new Blu-ray disc, when we can we'll replace with images from the actual 4K disc and if possible a demo video as well. 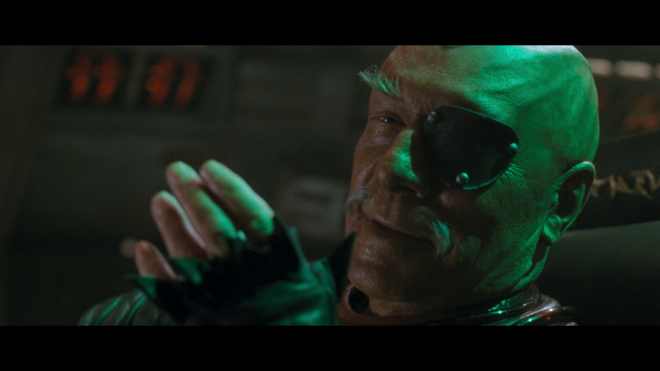 Rounding out the original cast franchise, Star Trek VI: The Undiscovered Country comes home with a wonderful 2160p Dolby Vision transfer in Director Nicholas Meyer’s preferred 2.39:1 aspect ratio for both cuts. Because this film is the only one of the franchise shot largely on Super35, fine film grain is much more apparent than in the other films. But considering the horrible waxy DNR and dodgy edge enhancement of the 2009 Blu-ray, I’ll take a slightly noisy grain structure any day of the week. That 2009 disc is quite ugly by comparison. This new transfer gives you a full appreciation of facial features, clothing textures, and the impressive models for our various starships. It’s extra nice to finally fully appreciate all of the creature makeup work that’s on display in that Klingon prison camp.

Dolby Vision HDR has been smartly applied giving colors and skin tones a healthy presence. Past releases could look very washed out and pale by comparison leaving the red Starfleet uniforms looking almost pink. Now they’re back to a nice crimson without making the cast look too flush. Likewise, blue and yellow tones come through nicely. Early CGI effects are a little dodgy, the energy wave at the beginning, or the floating Klingon blood blops can kind of float over the screen a little - but outside of completely redoing those effects shots, I don’t think there’s any getting around that. Black levels are also greatly enhanced giving shadows to the image we haven’t seen before with a stronger three-dimensional depth. Whites are crisp without any blooming issues. Elements are in great shape without any damage to report. 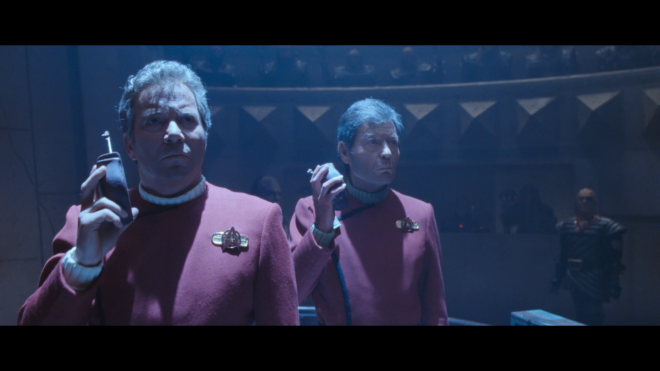 And once again, like the rest of the 4K releases for this franchise - Paramount opted to recycle the same excellent Dolby TrueHD 7.1 audio tracks for both cuts of Star Trek VI: The Undiscovered Country. Doing some disc flipping with the 2009 release, I didn't notice anything different. Sure, a new Atmos track like what the Director’s Edition enjoys would have been great but I’m not going to complain. This track is active and engaging with clean dialog, and great sound effects and Cliff Eidelman’s excellent score comes through without issue. 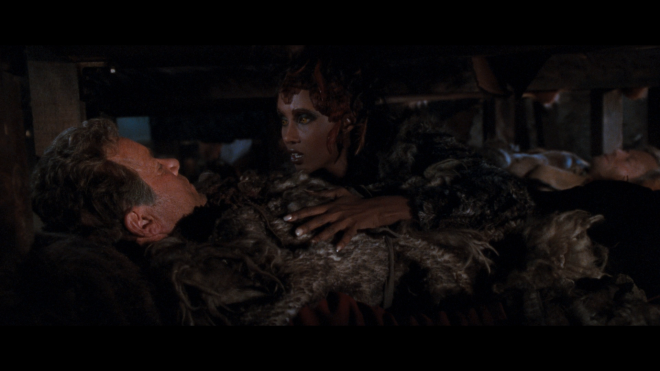 Nothing new in the soup for this release, but fans of the film can enjoy a trove of excellent archival materials. If you haven’t seen them or listened to the audio commentaries, they may be older but they’re new to you! And those commentaries really are the highlight. The other featurettes are nice but I hold the commentaries as the more informative and interesting extras of the whole bunch. For clarification, the included 1080p Blu-ray only features the Theatical Cut of the film so the text Commentary for the Director’s Cut is not included on that disc, only the 4K Disc.

Star Trek VI: The Undiscovered Country ships out the original cast and crew of the Enterprise in grand fashion. After the relatively uneventful fifth film, this was a welcome return to form offering a thoughtful action-mystery-whodunnit as the final cinematic voyage for our amazing cast of characters. Its ideas and themes may be pretty surface-level, but the film still holds up right through to the emotional end credits. After a fresh restoration for this 4K Ultra HD Blu-ray, Undiscovered Country finally actually looks like a film again without the horrible DNR and over-used edge enhancement. The same audio track has been brought over - but that’s perfectly okay and a massive collection of archival bonus features beams aboard this excellent release. If you’re someone not aiming to own every film of the franchise or are simply looking to complete your collection from the previous 4-Film 4K set, this is a great disc for the shelf. Highly Recommended.