Star Trek V: The Final Frontier may be the lowest point for the original crew's cinematic adventures, but that’s hardly Director and Star William Shatner’s fault. Practically cursed from the beginning, the film is a rough hodgepodge of grand sci-fi ideas that never really come together in the wake of the incredibly popular fourth film. A low point, but still an entertaining adventure. This new 4K Ultra HD gives the film a wonderful Dolby Vision upgrade that easily surpasses the waxy 2009 Blu-ray with the same excellent audio mix, and a bunch of worthwhile bonus features. Not the best, but far from the worst Trek - Recommended

And then there’s Star Trek V: The Final Frontier…

Well, you can’t blame Shatner for trying. After the trilogy success of Wrath of Khan, The Search for Spock, and The Voyage Home, Shatner pulled his contract weight ensuring he got to helm the film and oversee its development. He wanted to create a movie that returned Trek to its headier and loftier science fiction ambitions, but Paramount wanted more of that family-friendly humor that made The Voyage Home the highest-grossing entry of the entire franchise until 2009’s Star Trek. This is a hallmark case of a movie that had a lot of ideas but wasn’t ready to film and so we have a bizarre mishmash of stories. The idea of the Enterprise discovering God at the center of the universe while being under the control of a Jim Jones-style zealot is certainly grandiose, but the film never lives up to its potential 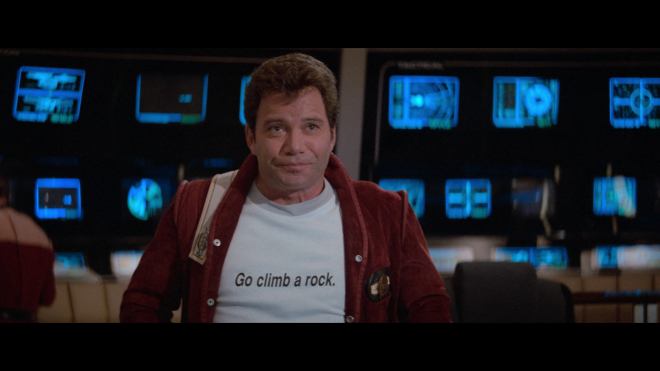 Even as a first-time feature filmmaker, Shatner certainly wasn’t bumbling through it. He actually competently brought this show home under the constraints of an extremely tight budget, unfinished story, and a visual effects company that was tasked way over their capabilities. There are a lot of ways to digest and discuss this film but suffice to say, I never hated it. Actually, I used to love this movie… when I was six. My dad took me to see it in the theater and I had a blast. But subsequent viewings over the last twenty-odd-some years, the film really is at the bottom of the pack hovering right around near franchise low points like Nemesis and Into Darkness. 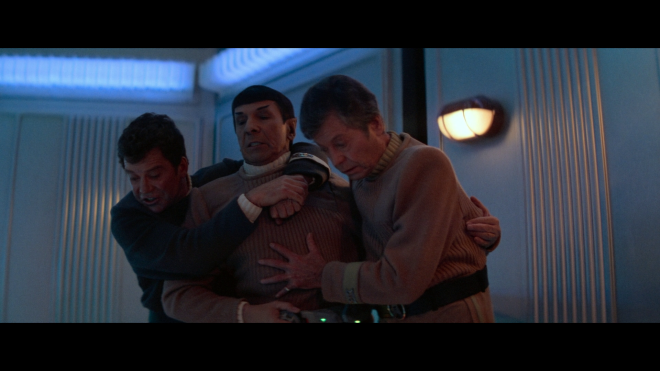 Vital Disc Stats: The 4K Ultra HD Blu-ray
Not to be left out of the fun, Star Trek V: The Final Frontier beams down for a new two-disc 4K Ultra HD Blu-ray with Digital copy release. Housed in a standard black case with an identical slipcover, the discs load to static image main menus with basic navigation functions. The 4K version is pressed on a BD-66 disc with teh 1080p version on a BD-50 disc. The standard Blu-ray holds the bulk of the bonus features. 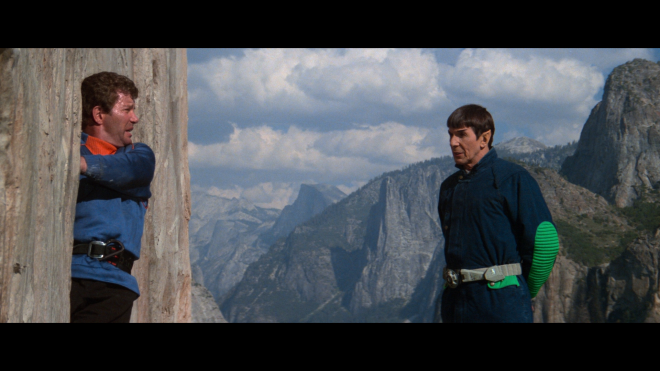 While it may not be the fan favorite of the franchise, Star Trek V: The Final Frontier scores a damn good 2160p Dolby Vision (and HDR10) transfer. Pretty much every film that hit Blu-ray in 2009 was beaten with the DNR ugly stick so it’s actually a grand thing that this film actually looks like a film again. Film grain does look like it’s undergone a little of Paramount’s standard management touches, but it’s largely intact and present giving a genuinely cinematic appearance.

Details throughout are fantastic allowing you to fully appreciate facial features, makeup effects, and costumes - even that silly three-brested cat woman creature thing that gets all of ten seconds of screen time looks fantastic. But at the same time, the cheap visual effects stand out even more than before. The fake El Capitan (where you can see the real El Capitan in the distance) looks even more obvious and any rear projection or optical shot is shoddy at best and noticeably stands out. But those are things that can’t be fixed. Dolby Vision HDR has been well applied to give a fresh appearance to the film with bold colors, bright whites, and deep inky blacks. Considering all things, this is a great effort for this film that’s largely cast aside when looking at the franchise as a whole. 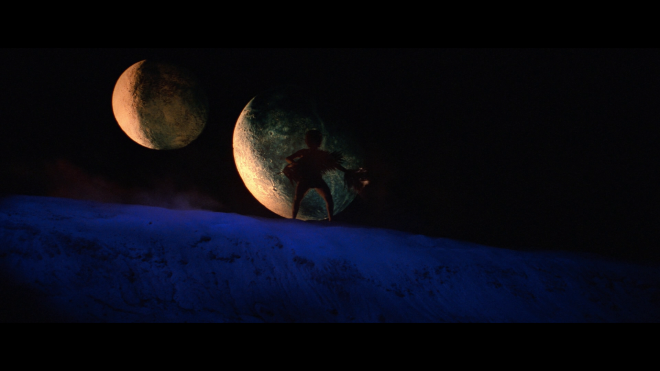 Like the other films in this series to hit 4K Ultra HD Blu-ray, there isn’t an audio upgrade. We’re getting the same Dolby TrueHD 7.1 track as before and once again - that’s not a bad thing at all. This is still an active and engaging mix that keeps your attention with clean dialog, active sound effects, and the magnificent return of Jerry Goldsmith for the score! 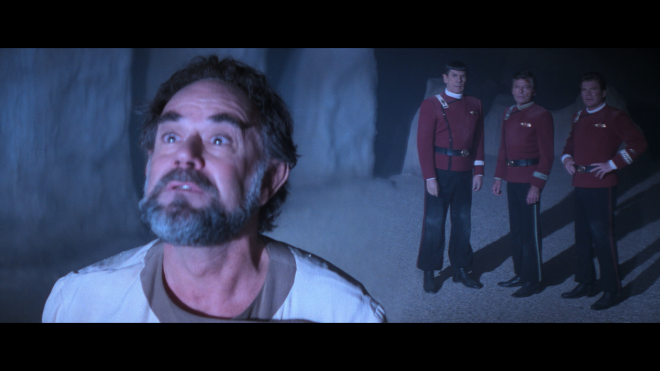 In another nice move, Paramount once again brings back a trove of legacy bonus features. Nothing is new in the stew here, but if you hadn’t picked up any previous Blu-ray or DVD sets, it’s all worth digging through. The Shatner commentary in particular is a great listen. The deleted scenes are also interesting looks at where this film was trying to go. 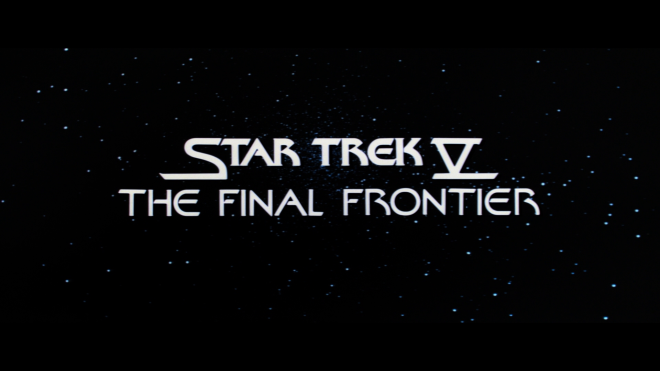 While a fun and entertaining adventure, it’s hard not to feel disappointment in Star Trek V: The Final Frontier. It’s a movie I pull out every so often wanting to like it more than I do, but it never gets better. But then it also doesn’t get any worse. I may have loved this movie as a kid, but as an adult, it’s another curious film of what could have been if Shatner had been given a better budget with less studio-mandated humor and goofery. He had some interesting ideas well worth exploring in the Star Trek universe, but they just don’t come together.

Like a laughing Vulcan, this film earns an impressive new 4K restoration with Dolby Vision HDR. Faults with shoddy visual effects notwithstanding, this is generally an impressive transfer. You can see and appreciate more of the production than ever before including a certain fan dance. Audio is the same track, but that’s fine. Paramount has also done a fine job bringing back a trove of archival bonus features to dig through. It’d been since the Special Edition DVD sets that I’d looked at any of this content so it was a fun refresher. It’s not Star Trek at its best, but Star Trek V: The Final Frontier is far from Star Trek at its worst. Recommended.