Boldly going where no television series had gone before, Star Trek: The Motion Picture Director’s Edition allowed the late Robert Wise the opportunity to properly finish and edit the film he always envisioned. This cut fixes the rough visual effects, and languid pacing bringing home a truly dramatic piece of science fiction that finally feels complete. Paramount Home video gives this cut of the film the red-carpet treatment with a fully restored Dolby Vision transfer and a magnificent Atmos audio mix with tons of new and archival bonus features to pick through. It may not be the best Original Cast film but it’s certainly the most ambitious and a wonder to behold. Highly Recommended

Star Trek: The Motion Picture is one of grand ideas and ambition. After the dynamite hit of Star Wars, suddenly space-age Science Fiction wasn’t a secondary genre. Every studio had to have the next “Star Wars” in theaters to entertain a fixated audience that demanded more spaceships and lasers. Paramount was already in the process of rebooting its classic television series and so the swift decision was made to upgrade this show to the big screen with master craftsmen in Robert Wise at the helm. But with the film’s lofty ambitions and heady concept, the film’s back was against the wall to meet a predetermined release date. What hit theaters in 1979 was the best that could be accomplished at the time and the would-be franchise was nearly scuttled after its maiden voyage. But when Paramount was readying their Special Edition DVD sets, they gave Robert Wise the chance to complete the film he envisioned with updated visual effects and a new edit.

Some new scenes were added, and some were trimmed down, but essentially this is the same film with a little different pace, different dialog cues, alternate takes, and new visual effects. I consider myself a fan of this edit, but then I also enjoy the Theatrical Cut too. I didn’t always love this movie, the first time I saw it as a kid was our VHS copy of the Longer Version. I thought it was slower than a slug and boring. It wasn’t Star Trek II. But with every new disc release, I’ve gone back to this film and it has steadily risen in my favor. It had a lot of grand ideas and themes and it wasn’t simply a “pew-pew” laser blast popcorn movie. It tried to have the sense of adventure of the original show but the scale and grandeur of something like 2001: A Space Oddysey complete with Douglas Trumbull visual effects. Of all the films in the original crew series, it’s the one most worth revisiting again and again. As much as I love Wrath of Khan, Search for Spock, Voyage Home, Undiscovered Country, and yes even Final Frontier - they’re all pretty surface-facing films. Their themes and ideas are right there to grab. In comparison, The Motion Picture is a much deeper well to draw from and I always feel like I come away with something new. 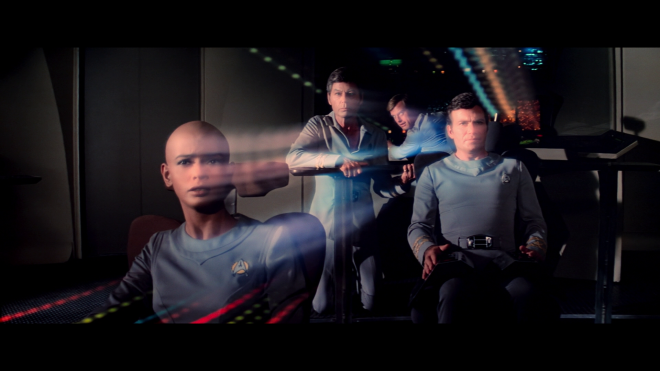 For another great take on this film, I encourage you to take a look at Josh Zyber’s 2009 Blu-ray Review.

Vital Disc Stats: The 4K Ultra HD Blu-ray
Star Trek: The Motion Picture Director’s Edition beams aboard 4K Ultra HD Blu-ray with a two-disc 4K UHD + Blu-ray Bonus Disc with Digital. These two discs are also found in Star Trek: The Original Motion Picture 6-Movie Collection and the limited edition Complete Adventure sets. Pressed on a BD-100 disc, the disc loads to a static image main menu with basic navigation functions. The Blu-ray houses the bonus features. There is not a 1090p Blu-ray with this set. The only set released in the U.S. that also includes a 1080p Blu-ray is the 6-Movie Collection

NOTE: All images are sourced from a standard Blu-ray disc. When we can we'll circle back to replace these images with 4K sourced images and or a demo video if possible. 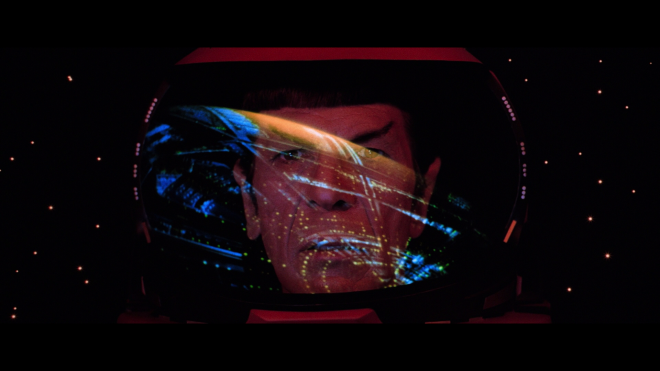 Of all the films of this franchise to hit 4K Ultra HD Blu-ray, the Director’s Edition received the most love and attention. In order for Robert Wise’s cut to come to the format, it required a complete ground-up restoration and reconstruction from the original 35mm negative elements as well as the original large format visual effects elements and the results are simply extraordinary. From small details in facial features and makeup to the incredible models used for the huge effects shots, this is some genuine restoration magic at work. Film grain appears to have undergone a little bit of management per Paramount’s usual workings, but nothing too intrusive or severe. It’s not the waxy mess of the original 2009 Theatrical Cut Blu-ray, there’s an actual grain structure to appreciate. Some of the original optical effects still appear a little dodgy, but others look tighter and clearer than ever before.

This version of the film also underwent a new color grading for Dolby Vision (and HDR10) that leaves the film looking vibrant and lush without over-saturating primaries or skin tones. Black levels are deep and inky and some of those grand visual effects shots against that vast starfield lend some impressive depth to the image. It may be slow and indulgent, but Scotty delivering Kirk to the Enterprise is simply glorious. The new CGI effects also blend much better and barely draw any attention to themselves, this isn’t at all like that other space franchise's "Special Editions." The biggest visual gain here is we now have a sense of scale to the inside of V’GR and it’s quite impressive in 2160p with HDR. Whites in those dentist smock uniforms are also much more vivid and crisp. 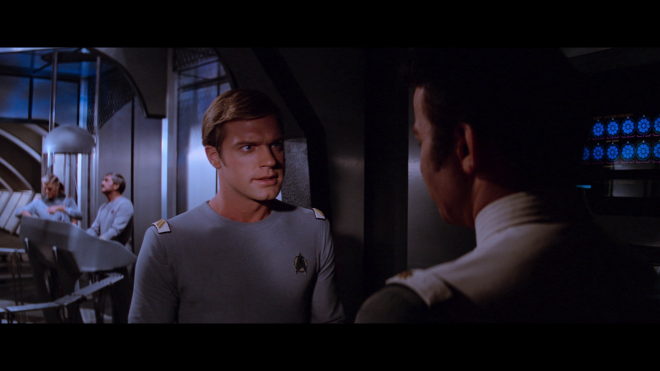 I missed out on seeing this restoration in theaters and like so many I’ve had to get by with Paramount+ streaming. Without the compression of streaming, this version looks even better on disc. Black levels have always been dodgy whenever I stream content so it’s nice not seeing those anomalies with this disc release. I honestly can’t imagine this film looking any better than this. It’s genuinely marvelous. 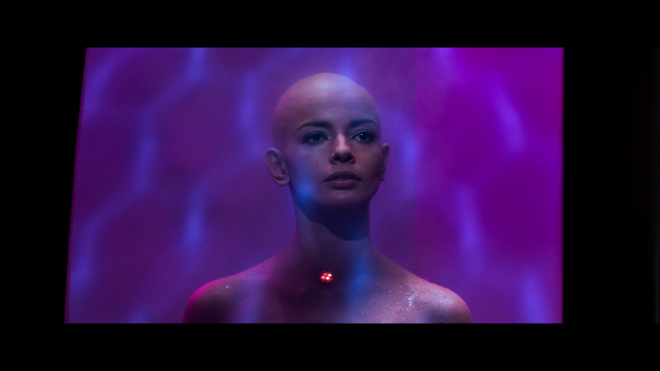 The Director’s Edition also comes packed in with a genuinely fantastic demo-worthy Atmos audio mix. From the opening overture and credits into the Klingon attack, this is a big soundscape at work. Front, side, rear, and overhead channels all get their time in the sun. Even the quietest conversational scenes have something happening to keep those channels engaged. A little moment like the first time Kirk arrives on the bridge and everyone is too busy to notice him, the chitter-chatter among the crew circles the channels beautifully. Throughout, the dialog is clean and clear and never overpowered by other elements. If anything, it’s actually easier to hear a lot of dialog exchanges since this cut used a number of different ADR takes for some dialog and the extra channel space keeps the mix from sounding too stiff or closed up. Then you have the iconic Jerry Goldsmith score. I play this movie loud largely because his compositions are so magnificent, but they sound incredible here. There’s cleaner and clearer instrumentation giving you the full appreciation of the orchestra. The Klingon theme with those pulsing low notes and harp twangs set the stage for the LFE response for the rest of the film. Levels are spot on without any need to monitor or keep your thumb on the remote, but play it loud! When you have the rumble of ships’ engines rattling your subs, you’ll be glad you punched the volume as loud as your ears can tolerate. 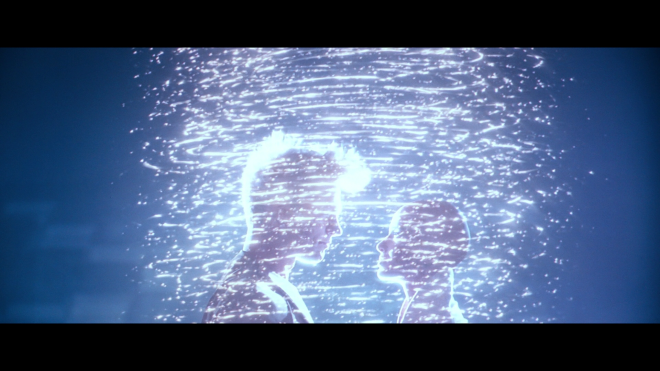 Not to be content with simply recycling archival materials - which are all excellent - Paramount sweetens the deal with an exciting collection of new extras and making-of materials to pick through giving you a little over an hour of exciting and worthwhile new extras to dig into and enjoy on top of the older commentary tracks and documentaries. And for the score hounds out there, the Jerry Goldsmith isolated score track is also available! 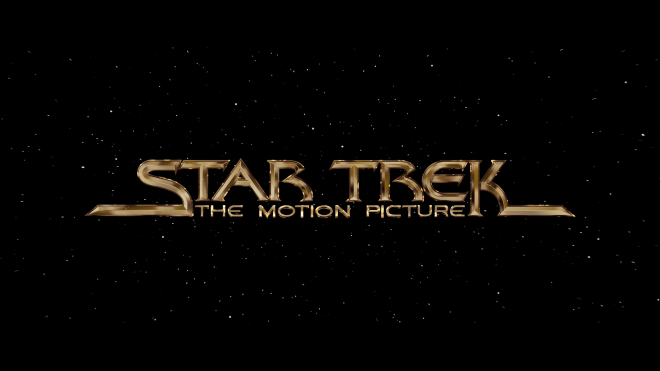 Star Trek: The Motion Picture Director’s Edition is an exciting version of this massive cinematic undertaking. Now fully restored and reconstructed for 4K Ultra HD Blu-ray, Robert Wise’s preferred version of the film looks and sounds better than ever. While the differences between this version and the Theatrical Cut may be small, the little edits and alternate takes and dialog allow the film to feel whole and complete. The Dolby Vision HDr transfer is simply magnificent and the new Atmos track is demo-worthy material. Add in an extensive assortment of new and archival bonus features, this is a terrific release for the first cinematic mission of the Enterprise and her original crew. Highly Recommended