Leonard Nimoy takes the helm in Star Trek III: The Search for Spock, and the third entry may be somewhat of a letdown after the previous film but is nonetheless an entertaining and suitable installment to the series. The search continues on 4K Ultra HD equipped with a beautiful Dolby Vision video, an identical Dolby TrueHD track, and pretty much the same set of supplements. This two-disc release of Search for Spock sees Paramount repackage the previously available two discs from their earlier 4-Movie Collection and the new 6-Movie Collection with new solo packaging for fans aiming to pick up specific films or collect the series individually. Recommended

"Picking up immediately after the events of The Wrath of Khan, the second sequel continues its predecessor's themes on death and rebirth with a story that quite frankly, is a bit too on the nose. In fact, the title The Search for Spock pretty much broadcasts the movie's intentions while perhaps, simultaneously insinuating the previous entry's emotional conclusion. This is a 100-minute trek to resurrect one of the most beloved characters of the series while also paving the path for the death of the franchise's most iconic and important character of all. Of course, in a universe where the filmmakers can conjure up creative solutions for bringing back the dead — such as mind-melding Spock's living spirit known as the "katra" to McCoy and Spock's corpse coincidentally reincarnating to maturity on the aptly-named planet Genesis — then, it should not come as a surprise when certain iconic figures also make their convenient return in the future."

"For me, this has always felt like a blatant cheat on the part of the filmmakers, a complete dodge from genuinely grappling with the aftermath of Khan in a follow-up that's reputed to be about dealing with a major blow to the spirit of the crew. Naturally, we can't really have a Star Trek movie without Spock, and I completely understand the need for this. But this is essentially the equivalent of Kirk avoiding the "no-win scenario" of the Kobayashi Maru, and it seems like a missed opportunity for something truly great. Yet, in spite of my grumblings with Harve Bennett's plot, I admit enjoying Leonard Nimoy's film directorial debut. It's a fun third entry where Nimoy proves himself a skilled and talented helmer, navigating the action and drama with a great sense of adventure. At the same time, he gives fans a memorable and ruthless adversary in Christopher Lloyd's Kruge. The second entry in the so-called "Genesis Arc" storyline is somewhat of a letdown after two excellent installments, but all things considered, it's a competent Trek movie." 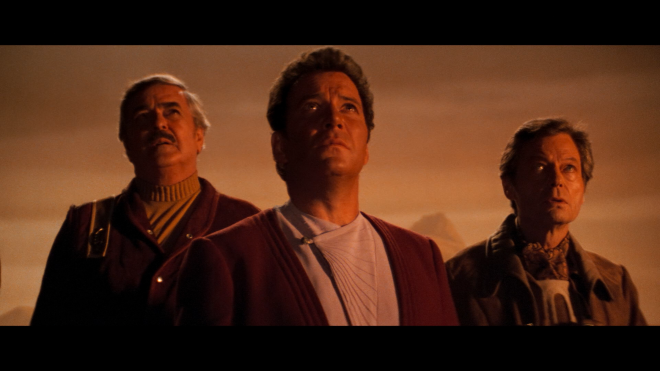 "The Genesis storyline continues to the prohibited Ultra HD zone with what appears to be a true remaster of the original camera negatives because the HEVC H.265 encode is a significant improvement over previous home video editions. Aside from the occasional soft moments, which happen fairly often but are inherent to the original photography, the native 4K transfer is considerably sharper with better definition and clarity of the background information. Whether aboard the Enterprise or the Klingon Bird of Prey or exploring the heavily vegetated planet, details in the stage design are incredibly discrete from a distance, and the smallest damage and smudge in the costumes are plain to see. Ignoring the caked-on makeup of the cast, facial complexions are highly revealing with excellent lifelike textures, exposing various pores, wrinkles and negligible blemishes. Even the matte composition effects look impressive at this resolution.

Unlike the previous two entries, cinematographer Charles Correll took a more colorful, vibrant approach to the second sequel, and his efforts really shine on UHD. The Dolby Vision HDR presentation displays a richly saturated palette, from the bold crimson red lighting and the deeper shade of burgundy in the uniforms to the electrifying blues and lively greens of the foliage and the Klingon ship. Moreover, the other earthy hues, oranges and yellows are more animated and spirited, making the movie somewhat reminiscent of the original television series. Contrast and brightness balance also enjoy a welcomed boost, showering the action with brilliant, radiant whites and inky, velvety blacks with excellent shadow detailing. The improved specular highlights add a crisp, tight sparkle to the stars, the lighting along the exterior of ships and a realistic sheen to the various metallic objects.

Awash in a very fine layer of natural grain throughout, the 2.35:1 image has a lovely film-like quality and appreciable dimensionality." (Dolby Vision HDR Video Rating: 84/100)

"Once again, the second sequel lands on UHD with an identical Dolby TrueHD 7.1 soundtrack that's relatively faithful to the original stereo design. However, the front-heavy presentation is arguably stronger than its predecessors, displaying excellent balance and good fidelity with background activity that moves convincingly between the channels and into the off-screen space. The mid-range may not be particularly dynamic or extensive, but it maintains clean definition and appreciable distinction in James Horner's score and during the loudest segments, generating a broad, spacious soundstage during action sequences. While vocals are clear and precise, a hefty low-end provides some weight and presence to the on-screen visuals. There's little activity in the surrounds, mostly reserved for some mild bleeding and a few random ambient effects. The receiver's Dolby Surround or DTS: Neural:X up-mixing functionality does well in expanding some of these atmospherics into the top heights with satisfying effectiveness. All in all, it's an enjoyable lossless mix that fairs better than the previous two entries."

For a more in-depth take on the audio quality, you can read Josh Zyber's review of the Blu-ray HERE.
(Audio Rating: 84/100)

Leonard Nimoy takes the helm in Star Trek III: The Search for Spock, the third entry in the franchise that sees the resurrection of one beloved character but the death of another iconic figure. As the follow-up in the "Genesis Arc" trilogy, the second sequel is somewhat of a letdown and missed opportunity for something more substantial and thoughtful, yet the movie nonetheless makes for an entertaining and suitable installment to the series. The search continues on 4K Ultra HD equipped with a beautiful and impressive Dolby Vision HDR presentation, giving fans a significant upgrade over its Blu-ray counterpart, but it features the same Dolby TrueHD 7.1 soundtrack and pretty much the same set of supplements. As these discs were previously released in the 4-Movie Collection from Paramount, this single-title two-disc set really is only for fans who want to pick up only specific films from the collection or gather up the original six cinematic adventures individually. Recommended