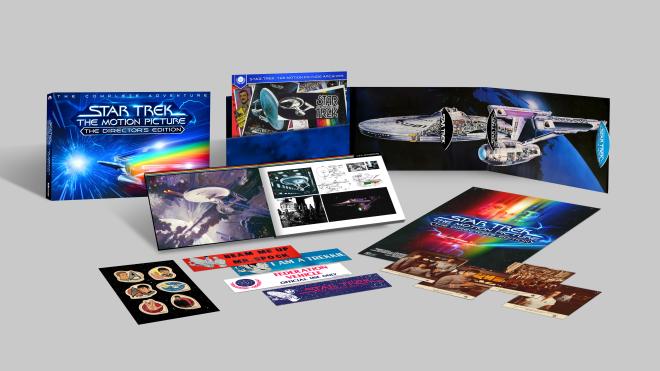 The U.S.S. Enterprise boldly debuted on the big screen with the cast of the original Star Trek series, including William Shatner, Leonard Nimoy, DeForest Kelley, George Takei, Nichelle Nichols, Walter Koenig, and James Doohan.  Meticulously restored and remastered, with enhanced visual effects and state-of-the-art sound, this definitive vision of director Robert Wise has been optimized for a new generation of fans. When an unidentified alien intruder destroys three powerful Klingon cruisers, Admiral James T. Kirk (Shatner) returns to the helm of a newly transformed U.S.S. Enterprise to take command and confront an alien spacecraft of enormous power heading toward Earth.

The newly restored, definitive version of the first big-screen adventure is presented in 4K Ultra HD with Dolby Vision™ and HDR-10, as well as Dolby Atmos®.  Also includes access to a Digital copy of the film and the following new and legacy bonus content:

This Limited-Edition Collector’s Set includes all of the above, plus an additional 4K Ultra HD disc containing:

The set is presented in deluxe packaging along with exclusive collectibles, including reproductions of original promotional material, a booklet with behind-the-scenes images, stickers, and more.