Alfred Hitchcock's psychological thriller Shadow of a Doubt is a masterful display of storytelling and a true masterpiece of cinema. The classic film visits Ultra HD with a lovely 4K video, a highly satisfying DTS-HD MA mono track but the same set of supplements. Nevertheless, the overall UHD package makes for an excellent, Highly Recommended addition to the 4K library.

Some of my favorite childhood movie-loving memories are forever associated with Alfred Hitchcock's Shadow of a Doubt, which is not the central reason for the high rating, just to be clear. But every time I watch this magnificent psychological thriller, I'm instantly whisked away to the 1980s. Every Sunday afternoon, I would sit in front of our 25" Zenith console television, which was considered massive at the time, with the fake wood paneling all around and decorative metal handles along the bottom. I was introduced to a whole host of classic black-and-white films in those days, like Frank Capra's It Happened One Night, William Wyler's Roman Holiday, Universal's iconic monsters, and, of course, many of Hitchcock's indelible favorites. And on one such lazy Sunday, I first met the young impressionable Charlie (Teresa Wright) and her dubiously strange Uncle Charlie (Joseph Cotten).

After countless repeated viewings since then, I remain impressed by how beautifully the film continues to hold up. And in revisiting it once again, I took more note and appreciation for the camerawork and cinematography in masterfully telling such a seemingly simple story. Set in the quiet, idyllic town of Santa Rosa where the local cop knows everyone by name, the prevailing theme centers on the Newton household portrayed as the ideal American family — the stereotypically average, normal family of that period. But a listless, bored Charlie (Wright) desiring excitement in her life seeds doubts very early on, except we don't really become aware of that until Uncle Charlie visits, which is the genius of Hitchcock. We don't recognize a problem until it's too late, and older Charlie serves as a kind of shadowy inverse twin to young Charlie — a darkness lurking beneath the surface of the ideal family, town, society or what have you.

This sense of duality, coupled with a pervasive feeling of disillusionment and loss of innocence creepily but steadily growing as the film progresses, is present throughout. And it is all gorgeously captured by Joseph A. Valentine's photography — the constant play with shadows, light, and darkness — or in the ostensibly silly tête-à-tête between young Charlie's father (Henry Travers) and Herbie (Hume Cronyn) — a foolish one-upmanship about committing the perfect murder that always seems to interrupt the family dinner. There is no doubt about it. Alfred Hitchcock's Shadow of a Doubt is genius filmmaking and a superb masterpiece. 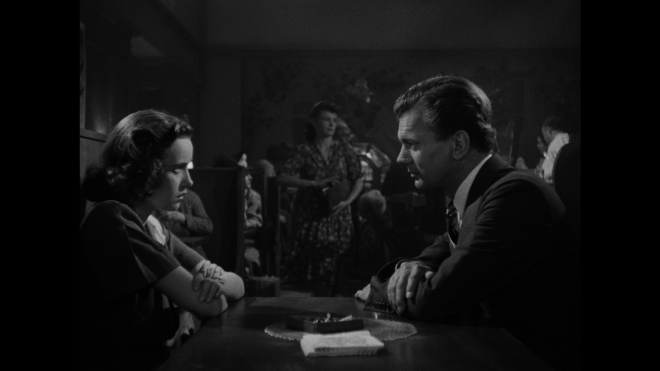 Vital Disc Stats: The Ultra HD Blu-ray
Universal Studios Home Entertainment brings Alfred Hitchcock's Shadow of a Doubt to 4K Ultra HD as a two-disc combo pack with a Digital Copy code. When redeeming said code, owners are granted access to the 4K UHD version in HDR10 and Dolby Digital Plus 5.1 audio. The Region Free, dual-layered UHD66 and Region Free, BD50 discs sit comfortably on the opposing panels of a black, eco-elite keepcase with a lightly-embossed slipcover. At startup, viewers are taken to a menu screen with the usual options along the bottom, quick access to the bonuses on the left, full-motion clips and music playing in the background. The movie is also available as part of the ten-disc 4K UHD collection dubbed The Alfred Hitchcock Classics Collection Vol. 2.

The classic psychological thriller comes home to Ultra HD with a beautiful HEVC H.265 encode boasting stunning contrast and brightness balance. The whites are exceptionally clean and radiant while black levels are inky and silky rich from start to finish. The stygian, velvety shadows penetrate deep into the screen without ruining visibility in the darkest, pitch-black corners. Specular highlights provide a tighter glow around the brightest, hottest areas, like the light fixtures where we can plainly make out the bulbs, and supplies a realistic sheen and sparkle on all the vehicles driving around town. Awash in a wonderful layer of natural grain, the 1.37:1 image comes with a lovely cinematic, film-like appeal. The native 4K transfer also shows razor-sharp definition in the furniture, the clothing and various other decorative items throughout the Newton household, such as the stitching of the doilies on tables. Facial complexions are highly revealing with lifelike textures in the cast, exposing the tiniest nervous wrinkle, pore and negligible blemish in Uncle Charlie. Except for minor instances of blurriness during dissolve edits and the intentional soft-focus shots of Teresa Wright, all of which are inherent to the source, the 4K HDR10 presentation is simply gorgeous. (HDR10 Video Rating: 92/100)

There's no doubt this DTS-HD Master Audio 2.0 monaural soundtrack is a notable improvement over its Blu-ray predecessor, possibly due to the same remaster used for the video. The film's sound design plays a crucial role in the story, and although largely contained in the center of the screen, this lossless mix does exceptionally well in delivering every aspect of the background activity with terrific clarity and detail. During exterior scenes of the idyllic town of Santa Rosa, the tiniest noise and commotion, like the local wildlife in the distance or the busy city traffic, are plain heard, generating a pleasing image with an excellent sense of presence while exhibiting an extensive mid-range without the slightest hint of distortion. Every whispered conversation and line of dialogue about the perfect murder is crystal-clear and precise, at all times, and the low-end is adequate and appropriate for a film of this vintage, providing the score with some appreciable weight. All in all, the track is impressively strong and satisfying. (Audio Rating: 86/100)

The same set of supplements enjoyed on Blu-ray is ported over for this UHD edition.

Since childhood, Alfred Hitchcock's Shadow of a Doubt has been a personal favorite, and over the decades with countless repeat viewings, my love of the psychological thriller has only matured into an appreciation for Hitchcock's masterful storytelling and camerawork. Without a doubt, the film is an undeniable classic and a true masterpiece of cinema. The Hitchcock classic arrives on Ultra HD with a lovely 4K HDR10 presentation and a highly satisfying DTS-HD Master Audio 2.0 monaural soundtrack, giving fans a notable upgrade over the previous Blu-ray release. Although the same set of supplements is ported over, the overall UHD package is nonetheless highly recommended and makes for an excellent addition to the 4K library.