Although not considered one of the legendary filmmaker's best masterworks, Alfred Hitchcock's Saboteur is nonetheless a thoroughly entertaining, well-paced espionage thriller, featuring wonderful performances by Robert Cummings and Priscilla Lane. The classic thriller uncovers political treachery on 4K Ultra HD with a smashingly good HDR10 video, a satisfying lossless mono track and the same bonus features as the previous Blu-ray. Overall, the UHD package is a Recommended and excellent addition to the Hitchcock 4K collection.

Out of fifty-four feature-length films by one of the greatest and most influential filmmakers in the history of cinema, ranking and comparing each of them is quite the challenge, but for me, Alfred Hitchcock's Saboteur would probably fall somewhere in the middle of his oeuvre. Still, the espionage thriller is thoroughly entertaining and a fun watch, largely thanks to the performances and chemistry of Robert Cummings and Priscilla Lane. And of course, Hitchcock deserves a great deal of credit for working his magic behind the camera, as does cinematographer Joseph A. Valentine for making it all look gorgeous. However, the weakest aspect arguably comes from the plot, which follows the familiar "hero falsely accused" premise seen in many of his films, most notably in The 39 Steps, The Wrong Man and would later perfect in North by Northwest. And although Hitchcock manages some excellent moments of suspense, especially the ballroom scene at Ms. Sutton's swanky home, there are very few surprises in both the story and the film.

Perhaps of more interest distinguishing this effort from the rest are the themes linked to a tale of the quintessential average American Joe begrudgingly caught in the middle of a terrorist plot at the height of World War II. While on the run after being falsely accused of sabotage, our reluctant hero's trek across the country to clear his name is really a clever guise to inspire and spur the audience's sense of patriotism and sense of duty as an American. This plucky will to resist unnamed evil forces trying to destroy democracy and freedom conveniently and not so subtly culminates in a fight atop the Statue of Liberty. But my favorite moment is when Barry (Cummings) and Pat (Lane) stow away on a circus caravan in which the plot's central theme is announced loud and clear — just in case you miss it.

Hitchcock's Saboteur may not rank as one of the legendary filmmaker's best masterworks, but it's nonetheless a fun, well-paced thriller that sets itself apart from the many other fictional propaganda films of that era. 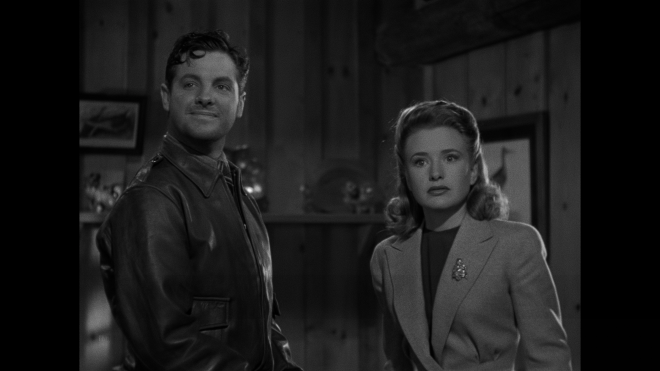 Universal Studios Home Entertainment brings Alfred Hitchcock's Saboteur to 4K Ultra HD as a two-disc combo pack with a Digital Copy code. When redeeming said code, owners are granted access to the 4K UHD version in HDR10 and Dolby Digital Plus 5.1 audio. The Region Free, dual-layered UHD66 and Region Free, BD50 discs sit comfortably on the opposing panels of a black, eco-elite keepcase with a lightly-embossed slipcover. At startup, viewers are taken to a menu screen with the usual options along the bottom, quick access to the bonuses on the left, full-motion clips and music playing in the background. The movie is also available as part of the ten-disc 4K UHD collection dubbed The Alfred Hitchcock Classics Collection Vol. 2.

Hitchcock's espionage thriller uncovers political treachery on Ultra HD with smashing results, showing a welcomed uptick in overall definition and clarity compared to its Blu-ray predecessor. Immediately apparent, the HEVC H.265 encode appears cleaner and more polished with a more refined grain structure, maintaining an attractive film-like quality from start to finish. The fine stitching and fabric texture of clothing are distinct. The lettering of advertisements and newspapers is mostly sharp, and background information and objects are quite detailed for most of the runtime. There are a few soft, blurry moments here and there during dissolve edits and the rear-projection effects with the climactic Statue of Liberty scenes serving as prime examples. Still, these are to be expected and inherent to the original photography.

Otherwise, the overall quality of the HDR10 presentation is gorgeous, displaying a wonderfully crisp and bold contrast balance with lots of clean, radiant whites and excellent visibility into the far distance. Presented in its original 1.37:1 aspect ratio, the native 4K transfer also comes with exceptional, rich black levels while shadows are deep and true, allowing for the small details within the darkest corners and in most poorly-lit scenes to remain perceptible, of which there are many. (HDR10 Video Rating: 84/100)

For all intents and purposes, it appears that this DTS-HD Master Audio 2.0 monoaural soundtrack is the same featured on the previous Blu-ray release, which is not a bad thing. In fact, this lossless mix delivers a solid, satisfying listen, exhibiting an extensive and detailed mid-range without a hint of noise or distortion. Imaging is impressively broad with plenty of detailed background activity and excellent distinction into the higher frequencies, which Frank Skinner's score enjoys. Dialogue reproduction is equally superb, delivering precise, crystal clear inflections in each performance. There isn't much in the low-end, but bass is nonetheless adequate for a film of this vintage, providing the visuals a bit of heft when required. (Audio Rating: 82/100)

The UHD edition ports over the same set of supplements enjoyed on the Blu-ray disc.

Alfred Hitchcock's Saboteur may not rank as one of the legendary filmmaker's best masterworks, but it's nonetheless a thoroughly entertaining, well-paced espionage thriller, largely thanks to the performances and chemistry of Robert Cummings and Priscilla Lane. The classic thriller uncovers political treachery on Ultra HD with a smashingly good 4K HDR10 presentation that delivers a welcomed upgrade over its HD SDR predecessor. Porting over the same DTS-HD MA 2.0 mono soundtrack and bonus features as the previous Blu-ray, the overall UHD package is nonetheless recommended and makes for an excellent addition to the Hitchcock collection.