Alfred Hitchcock's swan song Family Plot may not tickle the funny bone, but the tightly structured plot nonetheless delivers an amusing journey to a satisfying and surprising conclusion. The black comedy thriller is unearthed for Ultra HD with a strong 4K presentation but features the same DTS-HD MA mono track and the same legacy bonuses. Nevertheless, fans will be more than satisfied upgrading to this UHD edition, and the overall package is Recommended.

Very loosely based on Victor Canning's mystery thriller The Rainbird Pattern, Family Plot follows a pair of con artists whose lives soon crash into each other thanks to a search for a missing heir. Although a bit laborious and at times slow-moving at achieving its objective, Alfred Hitchcock's black comedy thriller, which tonally differs from the source material, is nonetheless an amusing ride where the convoluted journey to when the swindlers eventually collide is its charm and point. The first is a pair of amateur fraudsters hired with locating a wealthy spinster's illegitimate nephew: fake medium Blanche (a wonderful Barbara Harris) and her cab-driving, pseudo-detective boyfriend George (Bruce Dern). The second pair is professional jewel thieves and serial kidnappers on the verge of pulling off their biggest heist yet: successful San Francisco jeweler Arthur Adamson (William Devane) and his somewhat skittish partner Fran (Karen Black).

Much of the dark humor in Hitchcock's swan song centers around Harris and Dern's squabbling couple as they haphazardly stumble from one clue after another. While Blanche continues milking the guilt-ridden heiress for more details with silly séances, George's second-rate private eye schtick actually works at obtaining more concrete information, like the empty grave of Edward Shoebridge and the person who purchased the tombstone, Joseph Maloney (Ed Lauter). However, many of the jokes fall flat or feel perversely strained, such as the car wreck on the mountain road, and it's never clear if Devane's jeweler is meant to be a farcical caricature. Whatever the case, the fun, ultimately, is in seeing the foursome finally clash in the end, and Ernest Lehman's script (North by Northwest) feels like a cheap, trashy pulp thriller purchased at the grocery store aisle where despite predicting which couple will come out on top, we're still genuinely surprised by how they succeeded. 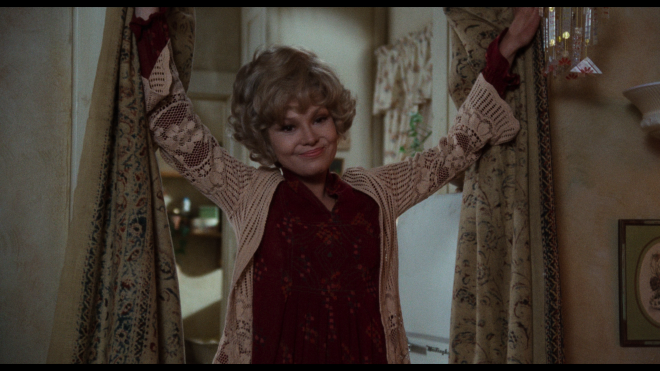 Vital Disc Stats: The Ultra HD Blu-ray
Universal Studios Home Entertainment brings Alfred Hitchcock's Family Plot to 4K Ultra HD as a two-disc combo pack with a Digital Copy code. When redeeming said code, owners are granted access to the 4K UHD version in HDR10 and Dolby Digital Plus 5.1 audio. The Region Free, dual-layered UHD66 and Region Free, BD50 discs sit comfortably on the opposing panels of a black, eco-elite keepcase with a lightly-embossed slipcover. At startup, viewers are taken to a menu screen with the usual options along the bottom, quick access to the bonuses on the left, full-motion clips and music playing in the background. The movie is also available as part of the ten-disc 4K UHD collection dubbed The Alfred Hitchcock Classics Collection Vol. 2.

Hitchcock's swan song is unearthed for Ultra HD with a good-looking HEVC H.265 encode that while on the one hand delivers a notable upgrade over its Blu-ray predecessor, the picture is comparably the weakest of the lot. The 4K transfer is pretty inconsistent throughout with many instances of softness and poorly-resolved scenes, some distractingly worse than others where the grain structure is noticeably thicker and more pronounced. This could be excused as inherent to the source, especially those sequences with rear-projection optical effects, but they nonetheless distract and have not aged well.

On the other hand, several moments look fresh and rejuvenated, revealing sharp details in the costumes, buildings and furniture with the attempted murder scene on the mountain road serving as a high point where the contrast is spot-on with brilliant whites allowing for extraordinary visibility into the far distance. Likewise, black levels are rich and accurate with inky, midnight shadows and strong delineation, providing the 1.85:1 image with welcomed dimensionality. The HDR10 presentation also boasts full-bodied primaries, but the cinematography favors warm earth tones, bathing the visuals in lots of hot marigold yellows, intense fiery oranges and a nice variety of sepia and mocha browns. Facial complexions appear healthy with strong, revealing textural details in the cast during close-ups. (HDR10 Video Rating: 72/100)

The DTS-HD Master Audio 2.0 mono soundtrack appears to be the same as its Blu-ray counterpart, which is not a bad thing. In fact, the lossless mix is quite impressive and elevates the visuals from their less-than-satisfying results. First and foremost, dialogue reproduction is excellent and very well-prioritized with precise, clean intonation in the voices so that we can plainly make out every inflection in the performance of the lovely Barbara Harris. The low-end is shockingly robust with some appreciably palpable weight in a few scenes while also providing the visuals and John Williams' score with a great presence. Additionally, the mid-range is surprisingly extensive with excellent acoustical details and distinction in the higher frequencies. Imaging is subtly layered with a variety of background activity, supplying the action with a welcomed broad and spacious feel. The design lends itself well to the receivers' Auro-3D up-mixing functionality as a few ambient effects convincingly extend to the front heights, namely the chirping of birds or leaves rustling, creating an awesome expansive, half-dome soundstage. (Audio Rating: 84/100)

The same set of bonus features is ported over from the Blu-ray for this UHD edition.

Loosely based on Victor Canning's mystery novel, Alfred Hitchcock's swan song Family Plot may not tickle the funny bone, but the tightly structured and meticulous plot nonetheless delivers an amusingly convoluted ride to a satisfying and surprising conclusion. The black comedy thriller is unearthed for Ultra HD equipped with a strong and generally good 4K HDR10 presentation but features the same DTS-HD Master Audio 2.0 mono soundtrack while porting over the same legacy bonus material as its Blu-ray predecessor. Nevertheless, fans will be more than satisfied upgrading to this UHD edition, and the overall package is recommended.