When the Master of Suspense is out only to entertain himself audience be damned, you get The Trouble with Harry. The film showcases all of Hitchcock's best tendencies as a filmmaker with stylish shots, ace direction, mounting suspense, with a delightfully macabre sense of humor! Universal Studios continues their winning streak with Hitchcock 4K Ultra HD Blu-ray releases for The Trouble with Harry scoring an often stunning and vivid transfer with crisp clean audio and a decent selection of archival bonus features. Highly Recommended.

Just who the hell is Harry Worp? In the small town of Highwater, he’s somebody. Or, rather he’s some body. For Captain Albert Wiles (Edmund Gwenn), he could be the victim of an errant shot while hunting. For the matronly Miss Ivy Gravely (Mildred Natwick), he’s the result of an unfortunate altercation. For the young and beautiful Jennifer Rogers (Shirley MacLaine), he’s a bad memory to be forgotten. For local artist-in-residence Sam Marlowe (John Forsythe), he’s a mystery that needs solving. Unfortunately for these four upstanding folks, he’s also a problem that just won’t stay buried. 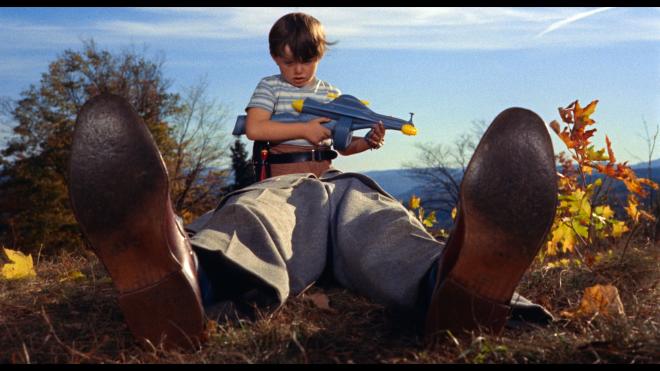 Well past the point of needing to prove himself with another mastful suspense hit at the box office starring the latest and greatest actor and actress, Hitchcock made one for himself. With a cast of professional character actors, he didn’t lean on a rising star or starlet. Instead of aiming for another showpiece in thrills and suspense, he aimed to bring audiences his naturally dark sense of humor. The Trouble with Harry was the kind of plot and story that Hitchcock found funny, so he made a movie. While the film received fair to positive reviews at release, it was a box-office dud in the United States. After its theatrical run ran out with a whimper, it was one of five films that reverted back to him and were rarely if ever seen again for nearly thirty years. Once the Hitchcock estate let the home video rights roll in the 80s for the growing VHS market, like Harry Worp a new audience exhumed this buried gem and decided to take another look at it.

I’ve seen just about every Hitchcock film in his catalog. One of the last ones for me to discover was The Trouble with Harry. After accidentally coming across it on TCM, it quickly became one of my favorites. Having gone years of only hearing “meh” to “eh” to “Unnngn?” reviews and recommendations from people I knew who’d seen it, my expectations were low, but within minutes of little Arnie finding Harry’s corpse, I was chuckling away. I soon found myself chuckling through the whole film with each new obstacle or every time Harry was exhumed only to be reburied. It’s not an uproarious comedy. It’s content to deliver consistent light laughter with some simple scenarios and a few grimly funny sight gags. 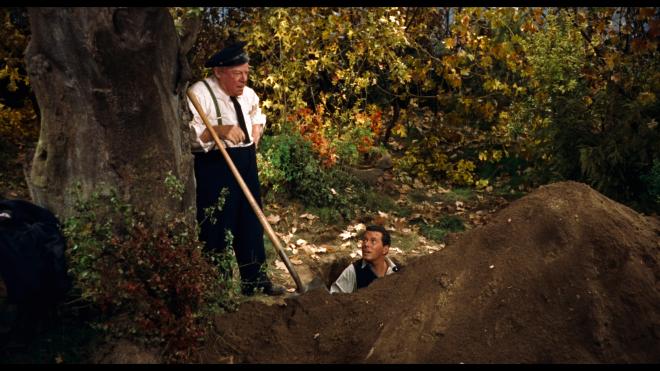 My only guess as to why this movie doesn’t stick for some folks is that it falls a little left field for the average Hitchcock posting. It doesn’t have a grand suspenseful plot like Rear Window or Rope and it doesn’t rely on seductive star power like Notorious or Suspicion. And it’s nothing like his later crowd-pleaser ventures North By Northwest or Psycho or The Birds. It’s a middle-career point for Hitchcock where it feels like he’s transitioning from the filmmaker he was into the filmmaker he would be for the rest of his career. He wanted to try something different and some people were all for it, and for others, it did nothing to tickle their funny bone. While I appreciate comedies that shoot for gags, skits, and oneliners, I like that this film is its own long punchline without much setup. It’s hilarious without being over the top or absurd. This film asks the question “What would you do if you found a dead body?” Its only answer is “Well, that depends…” and I think that’s damn funny.

Vital Disc Stats: The 4K Ultra HD Blu-ray
The Trouble with Harry digs its way onto 4K Ultra HD Blu-ray as a two-disc 4K UHD + Blu-ray + Digital set from Universal. The 4K version is pressed on a BD-66 with the 1080p version coming in on a BD-50 disc. Both discs are housed in a standard two-disc keepcase with slipcover. The disc loads to a static image main menu with basic navigation options on the bottom with bonus features along the right side. 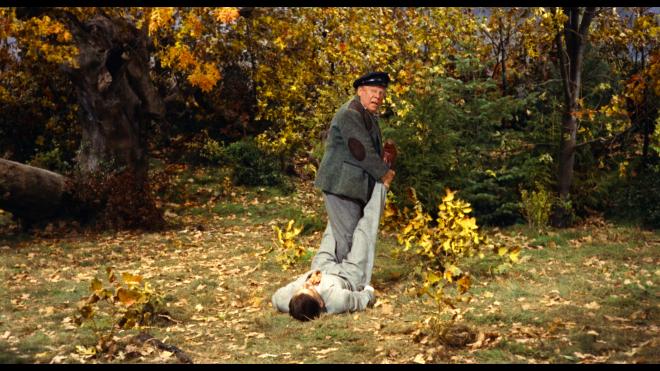 When The Trouble with Harry found its way to Blu-ray, it was a fantastic effort in 2013. Nearly a decade later, we’re treated to another marvelous 4K Ultra HD Blu-ray release of a Hitchcock classic. This is a beautiful native 4K HDR10 transfer that fully grabs all of the colorful splendor this film offers. Shot on location in Vermont, the changing leaves and foliage are often stunning, featuring a full range of deep reds, yellows, and oranges against a lovely blue sky. Skin tones are healthy and accurate without issue. Details are magnificent, offering a full appreciation of facial features, clothing textures, and the detailed production design with a natural-looking grain structure that isn’t overly noisy or wiped clean. 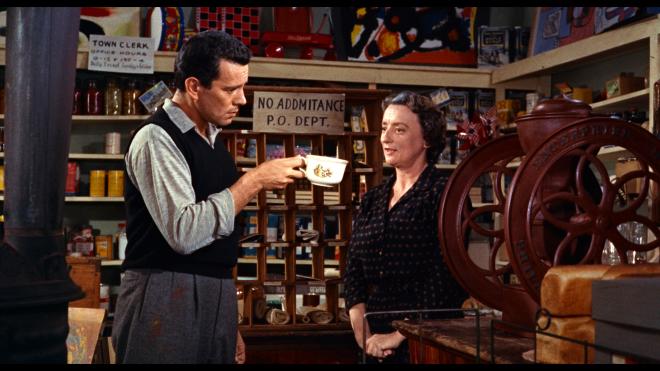 This judiciously applied HDR10 grade does what it does best offering deep inky blacks with beautiful shadows and shading for the colors with crisp whites. During this round, I was most impressed with the sense of depth in the image. The middle and wide shots are always wonderful but I was impressed that even in the tight confines of the general store or Jennifer’s home how that sense of three-dimensional depth came through. The Trouble with Harry already enjoyed a terrific 1080p disc and this 4K release takes everything that worked so well for that release and offers up several fine-tuned improvements for an even better video presentation. 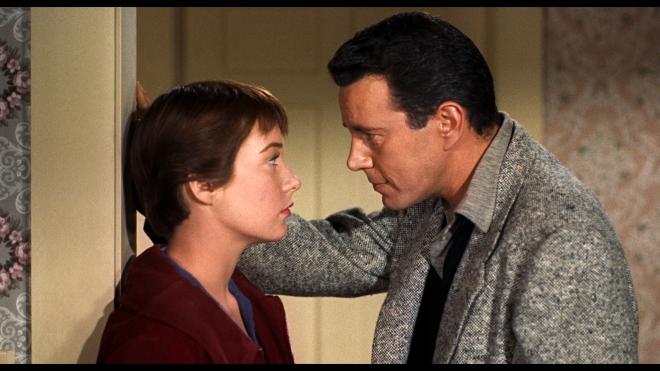 The 2013 Blu-ray of The Trouble With Harry came in with a solid DTS-HD MA 2.0 track and Universal saw no need to do an upgrade or offer any other enhancements for this disc. It’s a simple and easy mix for this film that offers plenty of attention to dialog, scoring, and sound effects. Overall this is a clean and clear track that still works. 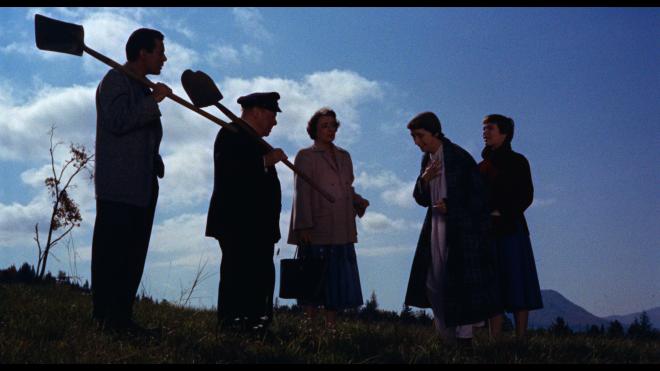 Like the rest of Universal’s Hitchcock releases, there aren’t any new Bonus features added for this release - which isn’t altogether a bad thing. While these pieces aren’t extensive there’s some interesting material well worth picking through if you haven’t gone through them already. Thankfully all bonus features are found on the 4K disc. 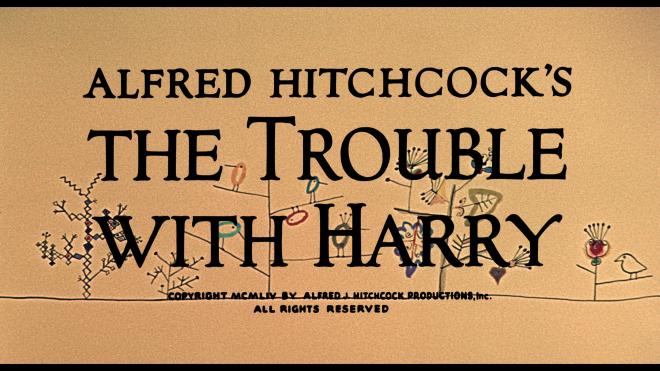 When you think Hitchcock, The Trouble with Harry probably isn’t the first film that springs to mind, but it’s one to celebrate just the same. A macabre dark comedy, the film leverages a terrific cast of character actors without any notable “big-name” headliner stars to carry this simple little film. This is Hitchcock out to entertain himself and it proves to be a damn funny little jaunt from the master of suspense. For their second round of Hitchcock 4K Ultra HD Blu-ray releases Universal returns to this beautiful film for an excellent native 4K HDR10 transfer. This was already a gorgeous Blu-ray and it now looks even better. The audio may be the same but it still works and the same set of bonus features have been ported over. All in all, a terrific release for a very entertaining film. Highly Recommended.