Although not remembered as one of the legendary director's greatest achievements, Alfred Hitchcock's Marnie is nonetheless a fascinating watch with strong performances by Sean Connery and Tippi Hedren. The psychological thriller confronts trauma on Ultra HD with an excellent 4K HDR10 video with the same DTS-HD MA 2.0 mono track and small assortment of bonuses. Overall, the UHD package still makes for a Recommended addition to the 4K collection.

Traditionally, Marnie marks the end of Alfred Hitchcock's peak years, that period in the 1950s and early 60s when the legendary director produced what are considered his best-known and most widely acclaimed productions. His final four films are not mentioned or immediately recalled as often as his earlier classics — at least, not outside his most dutiful fan circles. Nevertheless, the psychological thriller is another tightly structured, elaborate tale of mystery by the aptly-named "Master of Suspense," and it is part of a strong finish in the waning years of one of the most illustrious and highly-distinguished filmmakers in the history of cinema. Loosely based on the 1961 novel of the same name, the plot centers around an enigmatic woman, the titular Marnie (Tippi Hedren), a serial embezzler who changes her identity after each crime. One of her employers, Mark Rutland (Sean Connery), eventually catches her, but rather than turn her in to the authorities, he blackmails her into marriage, which is where the film begins to unravel.

Although better regarded today than when it originally premiered, the film is not one I would personally recommend or highly rank because frankly, the story only feigns at being a labyrinthine fable about an inscrutable kleptomaniac with a traumatic past, but it strains at metamorphosing into a curiously strange romance of the couple. Given the period when it was released, the production should admittedly be lauded for tackling some weighty subject matters like Marnie's possible sexual aversion disorder. However, this sometimes feels undermined by Hitchcock's familiar story gimmicks and typical plot devices, which occasionally even seem forced, such as the embezzling serving as the MacGuffin. Much of the couple's strange courtship also strikes me as borrowing heavily from Hitchcock's far superior works, chiefly Vertigo with a dash of mommy issues à la Psycho. Ultimately, when the root of Marnie's behavior is finally brought to light, it actually fails to expound on anything, except perhaps her debilitating repulsion to the color red.

Yet, in spite of my criticisms and fault-finding in the story, I have to admit that Hitchcock's Marnie is nonetheless engaging, keeping viewers invested in solving the mystery of this career criminal or at least, wanting to learn more about her strange behavior. But much of that, as always, is really to the genius of Hitchcock's masterful camerawork and skilled storytelling, knowing precisely how to leave little breadcrumbs for further enticing his audience until the very end. 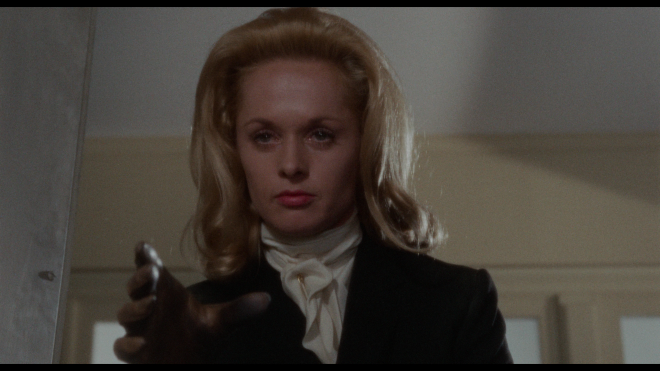 Vital Disc Stats: The Ultra HD Blu-ray
Universal Studios Home Entertainment brings Alfred Hitchcock's Marnie to 4K Ultra HD as a two-disc combo pack with a Digital Copy code. When redeeming said code, owners are granted access to the 4K UHD version in HDR10 and Dolby Digital Plus 5.1 audio. The Region Free, dual-layered UHD66 and Region Free, BD50 discs sit comfortably on the opposing panels of a black, eco-elite keepcase with a lightly-embossed slipcover. At startup, viewers are taken to a menu screen with the usual options along the bottom, quick access to the bonuses on the left, full-motion clips and music playing in the background. The movie is also available as part of the ten-disc 4K UHD collection dubbed The Alfred Hitchcock Classics Collection Vol. 2.

Trauma is revisited on Ultra HD with an excellent HEVC H.265 encode that delivers another salient upgrade from its Blu-ray predecessor. The 4K transfer shows sharper details in the hair, clothing and furniture for a majority of the runtime. A few softer moments are present here and there, but they are to be expected and mostly related to the rear-projection optical effects. Aside from those, the improved contrast and brightness balance allows for better visibility in the far distance and within the darkest, murkiest shadows. While black levels are notably inkier and more accurate, providing the 1.85:1 image with appreciable depth and a lovely cinematic appeal, specular highlights supply the biggest improvement, furnishing various metallic surfaces with a realistic sheen and a tighter glow around light fixtures to reveal the finer details. The HDR10 presentation also comes with a more dynamic color palette overall than its HD SDR counterpart, boasting richly saturated primaries, particularly the reds, and spirited, vibrant secondary hues, especially the warm, buttery yellows and the impressive variety of browns. With a more refined and consistent grain structure throughout, the 4K video has an attractive, film-like quality that fans are sure to appreciate. (HDR10 Video Rating: 82/100)

As with the other films in the box set, Hitchcock's psychological thriller arrives with the same DTS-HD Master Audio 2.0 monoaural soundtrack as the Blu-ray. However, dialogue reproduction appears to be better balanced and prioritized above the rest of the sound design, which was an issue mentioned in our previous review. The low-end is accurate and appreciable for a film of this vintage. Imaging largely feels broad and engaging with Bernard Hermann's score displaying appreciable clarity and acoustical detailing. The upper ranges, which mostly have to do with the cracking boom of thunder, are not quite as distinct and clean as would be preferred, but then again, there weren't instances of distortion either. The effects simply fall a tad flat and feel tightly uniform, but admittedly, that's a minor quibble to an otherwise excellent lossless mix. (Audio Rating: 78/100)

As with the other Hitchcock classics, this UHD edition ports over the same legacy supplements as its Blu-ray predecessor.

Although it doesn't rank high on my list of favorites or is even considered one of the legendary director's greatest achievements, Alfred Hitchcock's psychological thriller Marnie is nonetheless a fascinating watch that keeps viewers invested in solving the mystery of a career criminal. Trauma is confronted on Ultra HD with an excellent 4K HDR10 presentation that offers a noteworthy and satisfying upgrade over its HD SDR counterpart. Featuring the same DTS-HD MA 2.0 mono soundtrack and the same small assortment of bonuses as the Blu-ray, the overall UHD package still makes for a recommended addition to the 4K collection.