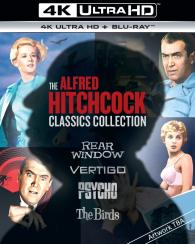 Synopsis: The story of a recuperating news photographer who believes he has witnessed a murder. Confined to a wheelchair after an accident, he spends his time watching the occupants of neighbouring apartments through a telephoto lens and binoculars and becomes convinced that a murder has taken place. Starring James Stewart, Grace Kelly, Wendell Corey, Thelma Ritter, and Raymond Burr.

Synopsis: An ex-police officer who suffers from an intense fear of heights is hired to prevent an old friend's wife from committing suicide, but all is not as it seems. Hitchcock's haunting, compelling masterpiece is uniquely revelatory about the director's own predilections and hang-ups and is widely considered to be one of his masterworks. Starring James Stewart, Kim Novak, Barbara Bel Geddes, Tom Helmore, and Henry Jones.

Synopsis: Phoenix secretary Marion Crane (Janet Leigh), on the lam after stealing $40,000 from her employer in order to run away with her boyfriend, Sam Loomis (John Gavin), is overcome by exhaustion during a heavy rainstorm. Traveling on the back roads to avoid the police, she stops for the night at the ramshackle Bates Motel and meets the polite but highly strung proprietor Norman Bates (Anthony Perkins), a young man with an interest in taxidermy and a difficult relationship with his mother.

Synopsis: Melanie Daniels (Tippi Hedren) meets Mitch Brenner (Rod Taylor) in a San Francisco pet store and decides to follow him home. She brings with her the gift of two love birds and they strike up a romance. One day birds start attacking children at Mitch's sisters party. A huge assault starts on the town by attacking birds.