The Marvel Cinematic Universe lives on after Endgame expanding the universe with a new generation of heroes with Shang-Chi: And the Legend of the Ten Rings. Starring Simu Liu, Awkwafina, and Tonu Leung - the film is the perfect blend of classic martial arts genres telling a personal family story for one of the best superhero origin films of any comic book cinematic universe. Now on 4K Ultra HD Blu-ray, the HDR10 transfer shines easily outpacing its SDR counterpart, but the Atmos mix while engaging is another rather limp outing from the House of Mouse. As a whole, a great flick well worth adding to the collection. Recommended.

Shaun (Simu Liu) is a brilliant college graduate who alongside his best friend Katy (Awkwafina) advance all of humankind - by parking lux cars of the rich and famous in San Francisco. But Shaun isn’t the affable everyman people assume he is. He is actually Shang-Chi and his father, Xu Wenwu (Tony Leung) is the centuries-old master of the infamous Ten Rings of Power and the leader of a clan of master assassins. Deluded into believing that Shaun’s deceased mother is still alive, Xu Wenwu is on a quest that could end all of humanity if Shang-Chi and his estranged sister Xialing (Meng’er Zhang) fail to stop him. 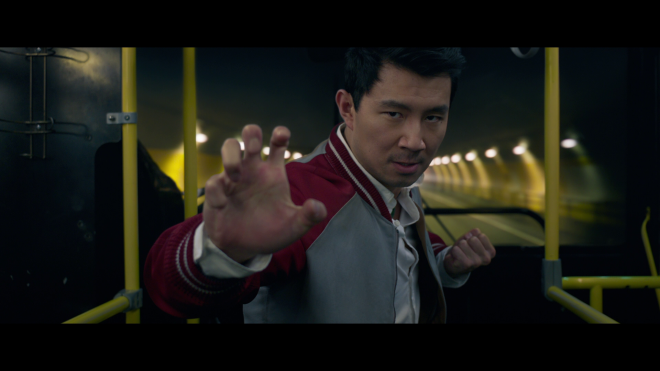 As a longtime fan of comics, I’m pretty much ready and willing to sign away two hours (or even four hours) of my life anytime a new DC, Marvel, or independent studio pumps out a new movie. I eagerly await the day that Todd McFarlane says with photographic evidence that the new Spawn movie is indeed filming. Ben Affleck wants to return to Daredevil in the MCU through the new Multiverse? Sure, I’m game! I go to these movies for action, adventure, and fun. A lot of them follow a pretty standard structure, but along the way, you get some genuinely great movies. Shang-Chi: And the Legend of the Ten Rings was a pleasant surprise. I expected to have a great time in the theater, but I didn’t expect to see one of the best and most entertaining superhero origin stories.

Why I feel this film works so well is because it’s so different from a lot of the MCU films to date. By the time we got to Captain America: The Winter Soldier, everything that was happening in each MCU film was designed to build towards something bigger. New characters were introduced not in their own movies but in a sequel of an established franchise. Captain Marvel might have been its own original first appearance for Carol Danvers, but there were so many MCU nuggets tying it to other films that it felt more like backstory filler for the expanded universe than the genuine introduction of a new hero.

And yeah, Shang-Chi has a lot of little franchise easter eggs throughout with the return of one specific character - but they’re relatively inconsequential to the main story. This film acknowledges past events like The Blip but is more interested and all the better for focusing on Shaun fully embracing his namesake and becoming Shang-Chi and mastering the Ten Rings of Power. The stakes are high, but they’re personal. Xu Wenwu’s goal is a threat to all humanity, but he’s not acting through the lens of world domination. There’s no portal of doom. There’s no intergalactic armada. One conflict, one hero. It was a very welcome change of pace.

Directed and co-written by Destin Daniel Cretton, Shang-Chi also serves up a fun blend of martial arts sub-genres. We get the gritty intense urban action film with the amazing sequences in the San Francisco bus we’d expect to see from a peak-era Jackie Chan movie like Police Story. Mixed in we also have a classic period-film Wuxia style martial arts adventure we’d commonly see with Once Upon A Time In China or Crouching Tiger Hidden Dragon. I was a little worried at first at how well this blend of martial arts action film styles would play out but it worked perfectly by the time we get to the climactic battle the shift in tone and style felt organic and right for the story.

Key to the film's success is the great cast. Simu Liu was perfect casting as Shang-Chi. More than physically capable for the role, he brings affable charm and humor to every scene. Tony Leung was another welcome addition to the show bringing emotional weight to the story with his own martial arts gravitas for the big action sequences. It doesn’t really need to be said but anytime you can add Michelle Yeoh to a film, it’s all the better for it. In a fun standout part was Awkwafina. She’s usually hit or miss with me but this time her comedic timing and her presence were a likable counterpart for Simu Liu to play off of. Also, it helped she wasn’t a useless character. She gets an arc that pays off.

If you’ve read this far into my ramblings it should be assumed I’m here for the further adventures of Shang-Chi. Understandably Marvel is usually pretty cagey about their projects so we don’t really know when or where we’ll get to see Shaun and Katy turn up next, but given the big tease right before the credits, it’s gotta be something big! While I’m all for him popping up in some team adventures, I do want to see more solo adventures.

Vital Disc Stats: The 4K Ultra HD Blu-ray
Shang-Chi and the Legend of the Ten Rings slips onto 4K Ultra HD Blu-ray in a two-disc 4K UHD + Blu-ray + Digital set. Pressed on a BD-66 disc, the discs are housed in a standard sturdy two-disc case with identical slipcover artwork. There is also Target Exclusive and Best Buy Exclusive packaging available on release day. The disc loads to the standard Disney menu that lets you skip to the movie or hit the main menu.

Note: We've only been able to source images from the included SDR Blu-ray. When we can, we'll swap out for full 4K images and hopefully add a video clip.

Shang-Chi and the Legend of the Ten Rings continues the unfortunate Disney/Marvel trend of finishing on a 2K Digital Intermediate. While not presented in Native 4K, this upscaled 2160p HDR10 2.39:1 packs plenty of visual punchs where it counts most. Details are strong throughout. There are a lot of intimate close-ups, especially during flashbacks, where you see the cast ages and the details in makeup hold up nicely. Clothing, intricate costuming, and various locations all stand up to scrutiny.

While this film was shown in various theaters and available on Disney+ and VOD streaming services with Dolby Vision HDR, Disney again opts to give disc collectors the basic HDR10 only presentation. Not to say that is a bad thing at all! This HDR grade enhances black levels, offers terrific white balance, and the vast array of colors pop off the screen. Between the modern-day urban locations and the fantastical scenic locations, there’s an impressive visual juxtaposition. Each location has its own unique aesthetic and this disc never fails to deliver deep inky blacks, bold whites, and impressive primaries. Free of any compression issues, this is a damned impressive disc.

Disney 4K releases have had an unfortunate touch-and-go relationship with Atmos ever since Thor: Ragnarok. In recent years their output has gotten better offering a more fully resonated surround experience with some respectable LFE kick. Now when Shang-Chi hit Disney+ I was decidedly non-plussed with the Atmos track, but I assumed that was because of streaming limitations. But alas - the disc isn't much better. I didn’t see this in a Dolby Vision theater with Atmos so I have no reference point there, but I have to say that while effective and immersive in a lot of ways, it’s also a very limp mix. There’s just so little LFE that big sequences like a runaway transit bus crashing over a parade of luxury vehicles should have some heft and oomph in the subs. But they don’t. Levels were a bit off to forcing me to crank things up well past normal for other *better* Atmos mixes.

That isn’t to say this track is terrible or unengaging - there’s plenty of great surround activity to go around. Height channels get quite the workout with all of the high-flying action sequences. The soundscape feels vast in a number of scenes allowing for near-constant surround activity with big bold action sequences. But whenever Xu Wenwu uses the Ten Rings of Power, I expected a little more rumble a little more punch. I wanted to feel that energy and it sadly just isn’t there. Checking against the DTS-HD MA 7.1 mix on the SDR Blu-ray, and it too is rather lifeless. In fact, it’s a much weaker track than I expected from a 7.1 mix. Maybe it was just cooked in this way from the beginning or maybe Disney just pooched it, but I swear when I saw this movie on IMAX it had a lot more power to it. This should have been a demo-worthy track.

Light on any expansive bonus features, Shang-Chi has a couple of typical EPK extras but the real meat is the Audio Commentary. Deleted scenes totaling nearly 15-minutes worth of material are pretty interesting and a genuinely pretty funny gag reel rounds out the extras. 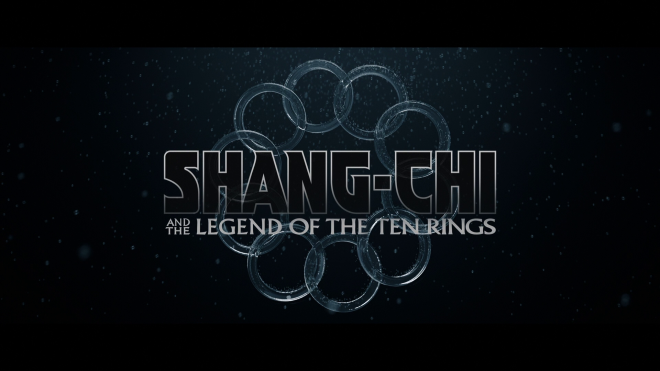 Fresh, new, funny, and exciting - Shang-Chi and the Legend of the Ten Rings was an excellent superhero origin story. While there are some MCU-related bits peppered throughout, they’re not the main focus allowing for a more personal first outing for this particular hero. Hopefully, we don’t have to wait too long for his next adventure!

Disney/Marvel brings Shang-Chi and the Legend of the Ten Rings to 4K Ultra HD Blu-ray in a two-disc + digital set. The upscaled HDR10 transfer is terrific offering bold colors and impressive details. Sadly, the Atmos mix is back to the rough old days of Disney and limp Atmos audio tracks. What should have been demo material just isn’t. It’s still better than what’s found on the standard Blu-ray, but this is what’s keeping me from giving this 4K release a more enthusiastic rating than just simply being Recommended. It's a great movie and an impressive transfer, but yeah, that Atmos track deflates a lot of my enthusiasm.