One of the greatest martial arts films of all time, Crouching Tiger, Hidden Dragon earns another release on 4K UHD Blu-ray from Sony in a new SteelBook set. These are the same 4K UHD and standard Blu-ray discs as previously released, but now with new disc art and the elegant SteelBook case. If you didn't already own these discs or are a SteelBook hunter, this is a classy release that'll look great on the shelf. Highly Recommended 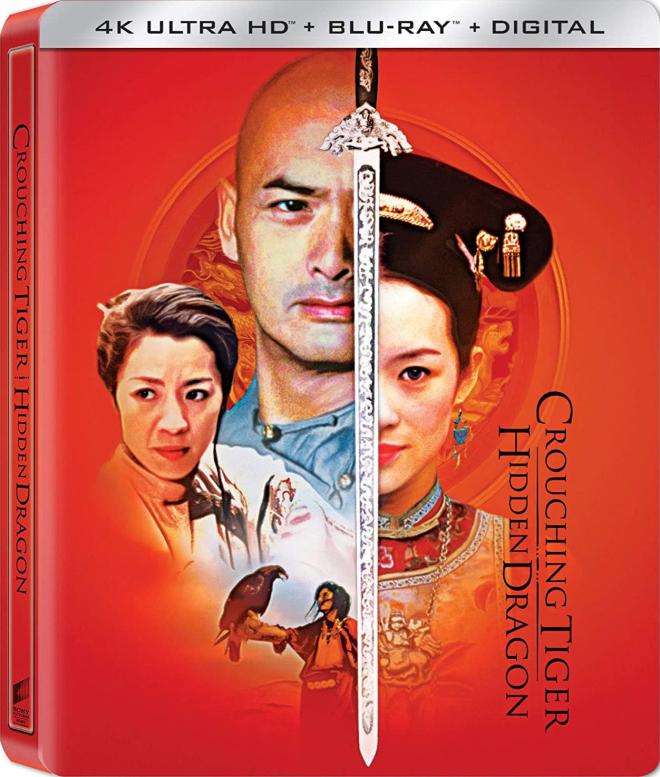 "Crouching Tiger, Hidden Dragon is a lyrical blend of myth, romance, generational strife, melodrama, and fabulous displays of martial arts prowess. The movie was deliberately designed as a fusion of Eastern and Western storytelling traditions, both literary and cinematic. Its themes of repressed emotions and unrequited love are taken straight from the Jane Austen playbook. The director often describes it as, "Sense and Sensibility with kung-fu." The secret to its success is the skillful balance it strikes between such disparate parts. It is neither a straight action movie nor a straight art film. By blending these genres together, the film rises above them and pushes forth into something newer and better. This is a tremendously entertaining and stimulating movie, invigorated with the power and potential of cinema."

When I first upgraded my setup to 4K UHD Blu-ray, Crouching Tiger, Hidden Dragon was one of the first discs I bought. I had recently purchased Sony's "Mastered In 4K" series disc, so I wasn't craving another purchase, but I had to see what this movie could offer with HDR - and I wasn't disappointed in the slightest. This film hit theaters the last year I worked my local movie theater and I devoured it through endless viewings during breaks or before/after my shifts.

I already had a nice love for kung-fu/wuxia movies thanks to a well-stocked local mom and pop shop - Jet Li was a favorite and I cherished my tapes of Once Upon A Time in China - but this one floored me. The action was intense and the characters were fully realized in a way I hadn't really felt in a companion film before. I was also amazed at the number of people that would crowd into each screening with near sell-out showings almost every day. Back then we had actual genuine film prints to work with and we had to stretch the two we had between four screens. I was amazed that many people would sit down for a movie with subtitles. We'd get the odd complaint from some folks about having to "read" the movie, but those were relatively few and far between.

To this day, Crouching Tiger, Hidden Dragon is a favorite. Once Tan Dun and Yo-Yo Ma's music starts, it's impossible for me to stop watching this movie. Every frame is a painting beautifully rendered on film. Every character is rich and with purpose and never wasted. Ang Lee was and remains an amazing filmmaker. While he may be more interested at the moment of pushing the boundaries of video cinema, he still crafts impressively intricate stories. I look forward to the day he's able to master his love for new technology and his knack for human storytelling. Until then, I'll be watching this one a few more times.

Crouching Tiger, Hidden Dragon takes another stab at 4K UHD Blu-ray with a new deluxe SteelBook release from Sony. Including the same 4K UHD disc and 1080p Blu-ray, the only new offering for this set is the SteelBook artwork. Everything is exactly the same - when I tested this disc it immediately triggered the time stamp on my player asking if I wanted to continue from where I left off previously. The included digital code is Movies Anywhere compatible and unlocks the full 4K streaming version. 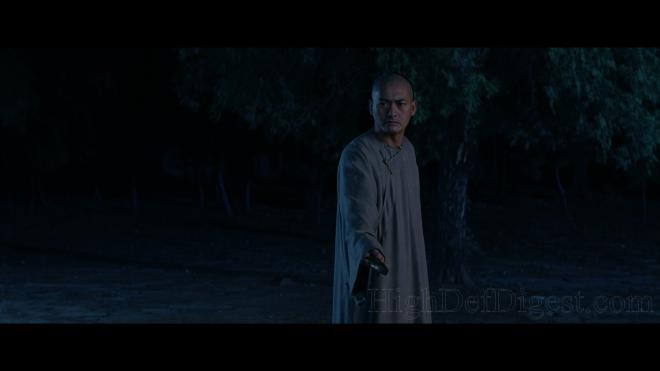 "The classic wuxia drama lands gracefully on Ultra HD Blu-ray, soaring through the skies with poise and elegance thanks to a strong HEVC H.265 encode in HDR10. Unfortunately, the results don't quite deliver the mortal blow to its Blu-ray counterpart as fans and early adopters would have preferred. But, on the flip side, the presentation, created from a brand-new 4K remaster of the original elements, offers some notable improvements worth admiring. Granted, they are minor and very subtle, making the overall quality comparable to the new BD, but the improvements are there nonetheless.

The picture is slightly sharper with more visible details and textures in buildings, clothing, and wooden furniture, and the faces of the cast come with better lifelike complexions. Worth noting, however, is that the filmmakers shot with a deliberately soft focus. This means several slightly blurry moments are to be expected, but thankfully, the photography is not so terrible as to ruin its appreciation. On the other hand, the color palette doesn't look much brighter, which may have much to do with the intentional cinematography. But primaries remain nicely saturated with secondary hues benefitting the most from the jump to 4K. Various earth tones and yellows are rich and glowing, giving the video a nice glow during many of the contrasting color schemes." 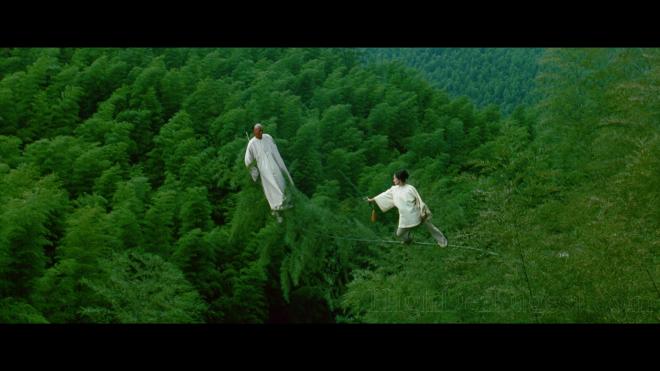 "Like the video, Ang Lee's gorgeous film has also been upgraded to a Dolby Atmos soundtrack, presumably taken from the same new remaster of the camera negatives. On the whole, the original sound design ascends to the object-based format with great results, offering several appreciable improvements.

Granted, there isn't a whole lot going on action-wise since much of the focus remains on the conversations and character interactions, but ambient effects occasionally bleed into the ceiling speakers with discrete effectiveness. The last half hour provides the film's most aurally impressive moments. While Li Mu Bai fights Jen Yu in the bamboo forest, the wind blows, and leaves distinctly rustle above the listening area. Later, when the two confront each other again, rain is heard pouring all around and overhead, and the sound of water trickling into the cave echoes everywhere and from up high, creating a satisfying dome-like soundfield." 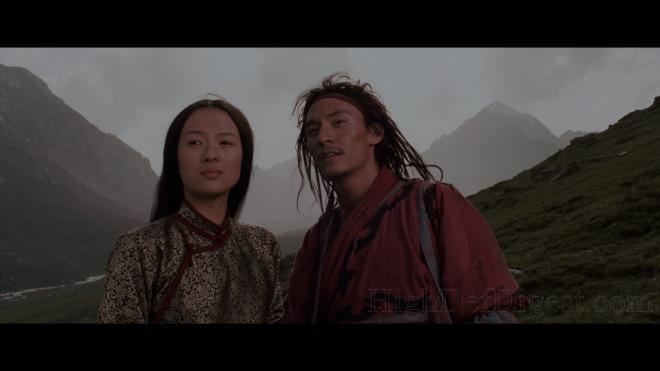 There aren't any new bonus features for this SteelBook release. Everything available was offered in the previous release. 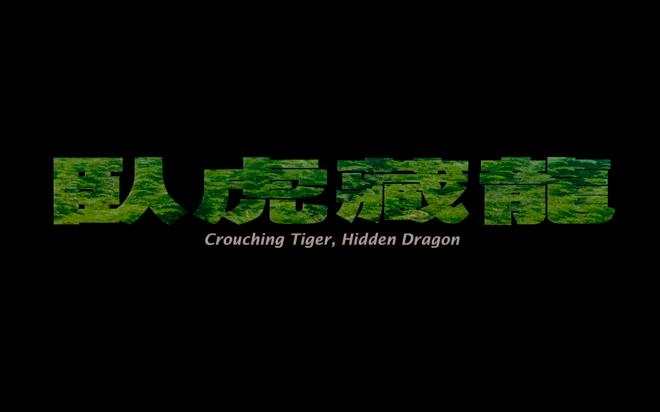 Crouching Tiger, Hidden Dragon remains one of the best films ever made. Ang Lee brought together the best elements of wuxia action films and western storytelling structure and created a masterful hybrid that is not only action-packed and visually stunning but emotionally resonant and fulfilling. In time for the film's 20th anniversary, Sony is reissuing the same set of 4K UHD Blu-ray + Blu-ray discs with new SteelBook packaging. Unless you're a SteelBook hunter, the packaging alone may not warrant a purchase, but if you're new to the 4K format and need to add this to the collection, this is a terrific set. Highly Recommended.