Two master warriors are faced with their greatest challenge when the treasured Green Destiny sword is stolen. A young aristocrat prepares for an arranged marriage, but soon reveals her superior fighting talents and her deeply romantic past. As each warrior battles for justice, they come face to face with their worst enemy - and the inescapable, enduring power of love.

When it was released theatrically in 2000, 'Crouching Tiger, Hidden Dragon' represented the first exposure most Western viewers ever had to the genre known as wuxia. Long a staple of Asian literature and cinema, wuxia stories mix elements of historical epic, martial arts action, and fantasy, in which characters can float through the air, walk on water, and perform all manner of amazing feats in defiance of the laws of physics and nature. Wuxia characters are like comic book superheroes rooted with a profound Buddhist philosophical bent.

A small handful of previous wuxia films, such as Jet Li's popular 'Once Upon a Time in China' series, had found a cult audience in the West. 'Crouching Tiger' was the first movie to introduce the genre to the mainstream. The film was a phenomenal success. It became the first foreign-language picture to gross over $100 million at the American box office, won four Oscars, and was nominated for several more. Ironically, the movie was less popular in Asia, especially China, where many audiences complained that it was too Western in structure and tone, too talky, and took too long to rev up to the action.

There's a reason for that. Taiwanese director Ang Lee's prior films, such as 'The Wedding Banquet' and the wonderful 'Eat Drink Man Woman', were intensely personal character dramas. After moving to the West, he continued that trend with the Jane Austen adaptation 'Sense and Sensibility' and the dysfunctional family drama 'The Ice Storm'. Returning East to make 'Crouching Tiger, Hidden Dragon', he approached the material from a similar perspective, one more akin to art films than action movies. The story focuses first on its character dynamics, allowing the action to evolve naturally from that, rather than the other way around, as is usually the case. 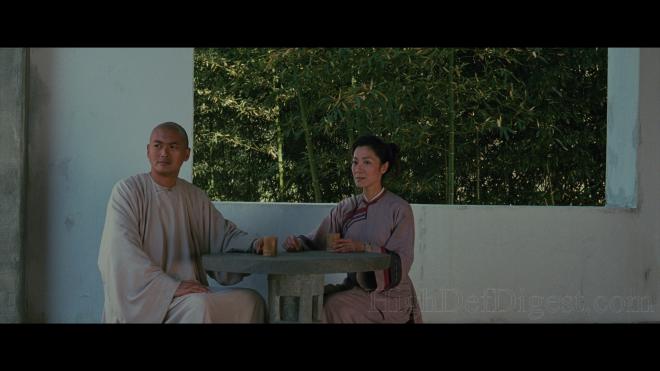 Hong Kong action superstar Chow Yun-Fat trades his usual cop and gangster roles for his first martial arts epic. He stars as Li Mu Bai, a warrior monk and master of the secret Wudan mysticism. Upon his retirement from fighting, Li Mu Bai makes a journey to visit his former mentor, ostensibly to present his prized sword, the Green Destiny, as a gift. However, the real purpose of the trip is to see Shu Lien (the extraordinary Michelle Yeoh), the woman who could have been the love of his life. Unfortunately, soon after arriving, a young rival steals the Green Destiny, forcing Li Mu Bai to retrieve it as a matter of honor. In the process, he may finally discover a disciple worthy of passing down his experience and wisdom.

Taken literally, the "Give back my sword!" plot is a rather thin conceit for such an epic story. Of course, the sword should be viewed metaphorically, as a symbol for the life that Li Mu Bai wishes to put behind him. Before he can move on to the next phase of the life he wants to live, he must properly retire the weapon and teach his young protégé its true purpose and meaning.

Despite a lack of experience, Chow transitions smoothly into his first wuxia role. The unnerving sense of stillness he conveys in action is a weapon more dangerous than Li Mu Bai's missing sword. Michelle Yeoh, who brings a more extensive background in the genre, proves herself equally adept at the nuanced dramatic work. But the real breakout of the production is Zhang Ziyi, whose beauty and intensity deservedly propelled her into major stardom with this movie.

'Crouching Tiger, Hidden Dragon' is a lyrical blend of myth, romance, generational strife, melodrama, and fabulous displays of martial arts prowess. The movie was deliberately designed as a fusion of Eastern and Western storytelling traditions, both literary and cinematic. Its themes of repressed emotions and unrequited love are taken straight from the Jane Austen playbook. The director often describes it as, "Sense and Sensibility with kung-fu." The secret to its success is the skillful balance it strikes between such disparate parts. It is neither straight action movie nor straight art film. By blending these genres together, the film rises above them and pushes forth into something newer and better. This is a tremendously entertaining and stimulating movie, invigorated with the power and potential of cinema.

Sony Pictures Home Entertainment brings 'Crouching Tiger, Hidden Dragon' to 4K Ultra HD Blu-ray as a two-disc combo pack with a flyer for an UltraViolet Digital Copy and glossy slipcover. At the moment, we are unable to verify the size of the content, but the triple-layered UHD100 disc sits comfortably opposite a Region Free, BD50 disc inside a black keepcase. At startup, the disc goes straight to an interactive main menu that changes screens when switching between the usual options while music plays in the background.

The classic wuxia drama lands gracefully on Ultra HD Blu-ray, soaring through the skies with poise and elegance thanks to a strong HEVC H.265 encode in HDR10. Unfortunately, the results don't quite deliver the mortal blow to its Blu-ray counterpart as fans and early adopters would have preferred. But, on the flip side, the presentation, created from a brand-new 4K remaster of the original elements, offers some notable improvements worth admiring. Granted, they are minor and very subtle, making the overall quality comparable to the new BD, but the improvements are there nonetheless.

The picture is slightly sharper with more visible details and textures in buildings, clothing and wooden furniture, and the faces of the cast comes with better lifelike complexions. Worth noting, however, is that the filmmakers shot with a deliberately soft focus. This means several slightly blurry moments are to be expected, but thankfully, the photography is not so terrible as to ruin its appreciation. On the other hand, the color palette doesn't look much brighter, which may have much to do with the intentional cinematography. But primaries remain nicely saturated with secondary hues benefitting the most from the jump to 4K. Various earth tones and yellows are rich and glowing, giving the video a nice glow during many of the contrasting color schemes.

Presented in its original 2.35:1 aspect ratio, the 2160p video displays average contrast compared to other UHD releases. Still, specular highlights are noticeably improved and whites are tad more intense, giving various pieces of metal, such as the Green Destiny, a realistic dazzling glow. Black levels are a tad richer in several sequences, but many spots arrive with somewhat murky shadows and a mild loss for the finer details. The 4K presentation is not the major upgrade expected, but the slight improvements make for a strong UHD.

Like the video, Ang Lee's gorgeous film has also been upgraded to a Dolby Atmos soundtrack, presumably taken from the same new remaster of the camera negatives. On the whole, the original sound design ascends to the object-based format with great results, offering several appreciable improvements.

Granted, there isn't a whole lot going on action wise since much of the focus remains on the conversations and character interactions, but ambient effects occasionally bleed into the ceiling speakers with discrete effectiveness. The last half hour provides the film's most aurally impressive moments. While Li Mu Bai fights Jen Yu in the bamboo forest, the wind blows and leaves distinctly rustle above the listening area. Later, when the two confront each other again, rain is heard pouring all around and overhead, and the sound of water trickling into the cave echoes everywhere and from up high, creating a satisfying dome-like soundfield.

However, as mentioned earlier, most of the viewer's attention is drawn towards the dialogue, which is crisp and precise in the center of the screen from beginning to end. Imaging feels broad and spacious with an extensive mid-range that's very dynamic and full of warmth. The music benefits the most, spreading across the entire soundstage and subtle bleeding into the surrounds with superb balance and fidelity. The low-end isn't particularly noteworthy, but it's responsive and accurate with palpable weight and presence in Tan Dun's beautifully haunting score. Rear activity is littered with various atmospherics and excellent directionality, particularly during those same fighting sequences in the final half hour.

Overall, it's a fantastic lossless mix that doesn't stray too much from the original design while also offering several new and amusing surprises in the overheads.

Same set of special features can also be found on the Ultra HD Blu-ray.

In 'Crouching Tiger, Hidden Dragon,' director Ang Lee tells a story about remaining loyal to tradition despite individual desires conflicting with those cultural expectations, which bring a great deal of painful self-sacrificing. It is a sweeping tale of romance told through the lens of a traditional wuxia film which transcends all cultural boundaries and speaks to deeper truth we all can relate to.

This Ultra HD Blu-ray arrives with a strong 4K video presentation from a brand-new remaster of the original elements, but unfortunately, it also doesn't offer much of an upgrade over its Blu-ray counterpart. On the plus side, the Dolby Atmos soundtrack is excellent, accompanied by a small collection of supplements and one lone exclusive to the new format, making the overall package worth checking out for fans and early adopters.

Sale Price 23.65
List Price 26.99
Buy Now
3rd Party 12.49
In Stock.
See what people are saying about this story or others
See Comments in Forum
Previous Next
Pre-Orders
Tomorrow's latest releases